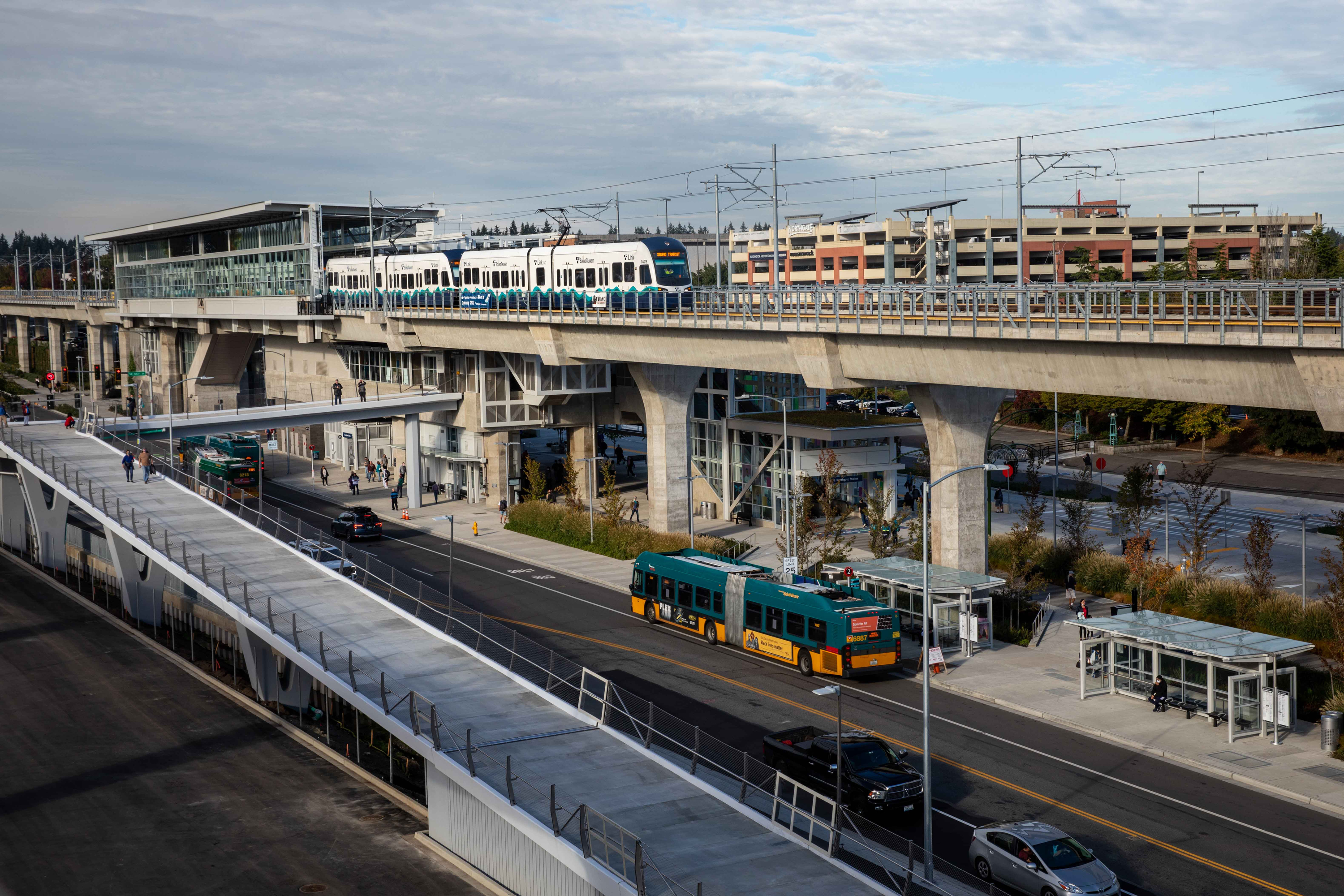 Before the pandemic, transit ridership in the Puget Sound grew nearly 20% between 2010 and 2018, according to the Puget Sound Regional Council, bucking the national trend. Infusions of federal COVID-relief funding, combined with a rebound in sales tax revenue, have many agencies poised to grow again. Sound Transit’s Northgate Link extension, pictured here in October, opened to great fanfare last year. (Lizz Giordano for Crosscut)

Federal dollars kept buses and trains moving throughout the financial roller coaster of the past two years. Combining that additional funding with a rebound in sales tax, there’s now a brighter outlook for transit agencies, but all is not rosy. Ridership continues to lag and most agencies expect it will take years to get everyone back on the bus.

In total, the federal government swooped in with three massive COVID relief packages, infusing about $2 billion into Puget Sound transit agency budgets — 10 times the usual $200 million that trickles down from the federal government each year. But, as often happens with a big gift of cash, how to spend that money has been a big point of debate and contention in the region.

“The federal government stepped up in an unprecedented way, providing funding for transit agencies to weather the pandemic,” said Josh Brown, executive director of the Puget Sound Regional Council, the organization tasked with doling out federal transit funding for the region.

Using a long-established so-called “earned shared methodology” formula, King County Metro sucked up $901 million, or nearly half of that $2 billion,.

The formula gives an advantage to Metro, the largest agency in the region, and Sound Transit, which focuses on commuter routes and is the second largest, said Derek Young, who sits on the Pierce County Council and Puget Sound Regional Council Board.

This worked out to roughly $350 per person in Metro’s coverage area, two times Pierce Transit’s allotment of $144. The smaller Kitsap Transit received about $168 per person in its taxing district, whereas about $192 and $200 per potential rider flowed to Community Transit and Sound Transit, respectively.

To compensate, Young, along with representatives of Everett Transit and Washington State Ferries asked for a larger portion of the COVID-relief funds when the latest and largest stimulus rolled in last September.

“Do I expect to get dollar for dollar with what King County does? No, of course not,” Young said. “The original sin is the Legislature. Funding our transit with local regressive sales tax, that’s the problem that starts this all.” 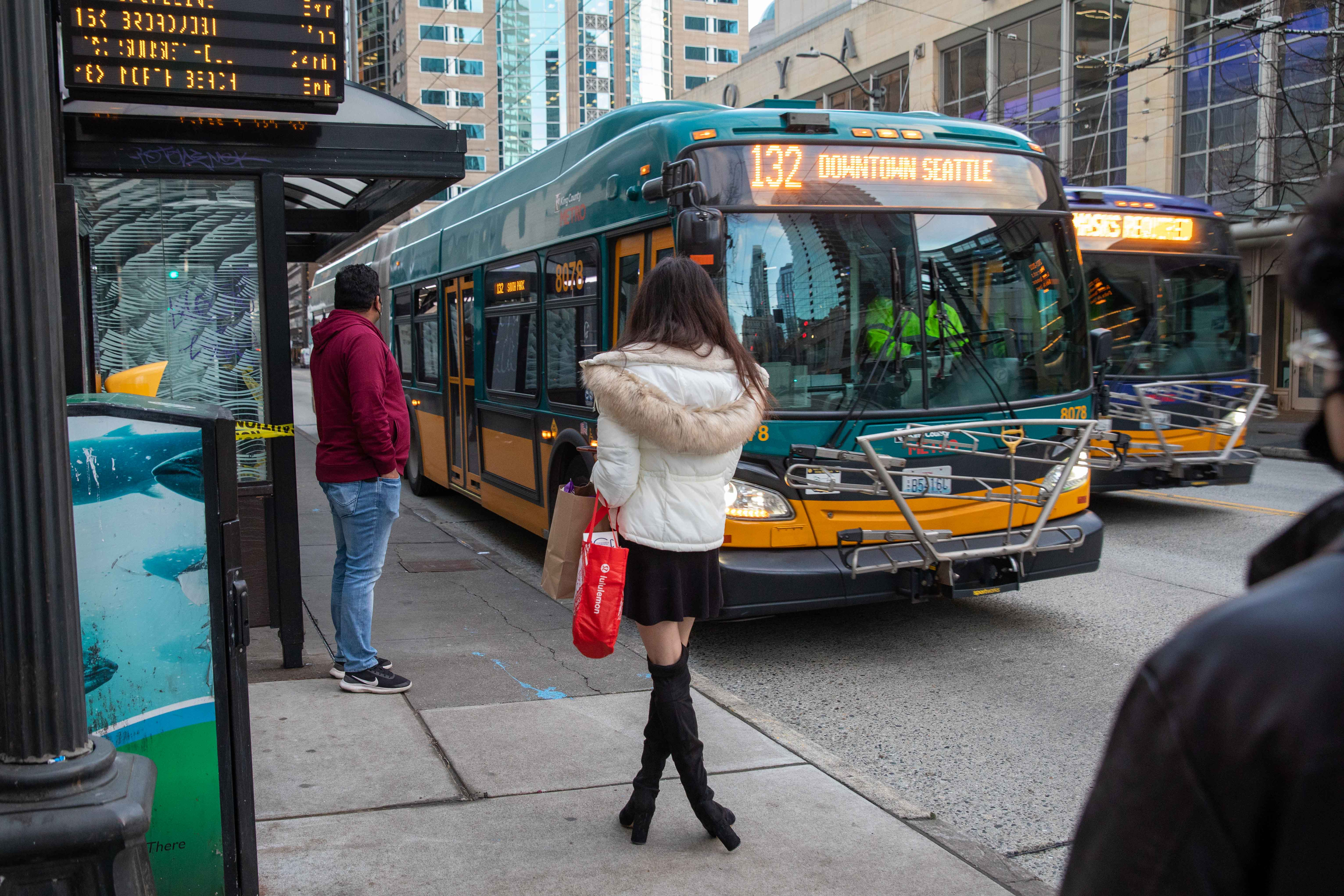 Pierce Transit has struggled over the years to persuade residents to pass tax levies that would increase sales tax to pay for bus service, after state funding for transit dried up. Ultimately, Puget Sound Regional Council Board members agreed to a 2.5% increase in funds to these three agencies.

“We just went through an update of our 2050 Plan, and we talked the entire time about equity. It's the word on the lips of every politician these days,” Young said. “And then when this comes up, it’s immediately, ‘Nope, I'm going to get mine and that's all there is to it.’ It's a really hard thing to swallow, because our actions do not match our rhetoric.”

The board is considering long-term changes to the formula for future federal dollars.

“It’s very hard to talk principle and policy where there's a stack of money on the table,” said King County Councilmember Claudia Balducci, who oversees Metro as part of her council duties and sits on the Sound Transit Board.

The way the agencies have traditionally decided to divvy up federal funding is more or less based on the size of the system and resources they are already bringing to the table, Balducci siad.

“I’m emphatic, to Pierce. I’m a strong transit advocate,” Balducci said. “I want to see more transit in Piece, I understand their argument about equity and population.”

The first round of federal money came in April 2020, filling in for some of lost sales tax and fare revenue.

"The immediate influx of funds really helped Metro stabilize and continue operating at a high level,” said Geoff Kaiser, finance manager at King County Metro Transit. “Our goal was to maintain prepandemic service as long as we could.”

This quick infusion allowed transit agencies to keep operating many of the buses and trains even as most riders hunkered down at home. The money paid for wages and benefits and vehicle maintenance, things required to keep the system moving and primed for when riders returned.

Agencies also spent some of the federal money responding to the emerging health crisis: passing out masks, updating air filtration systems, adding buses so riders could social distance and increasing disinfecting and cleanings of vehicles. Some also suspended fares for a few months to give operators more distance from the riders, and they provided hazard pay or additional sick leave.

Coming into 2020, King County Metro was one of the fastest growing transit agencies in the country. The agency was busy adding bus rapid transit lines, increasing frequencies on routes and trying to tackle transit deserts by adding small scale service.

But the pandemic threatened all that. 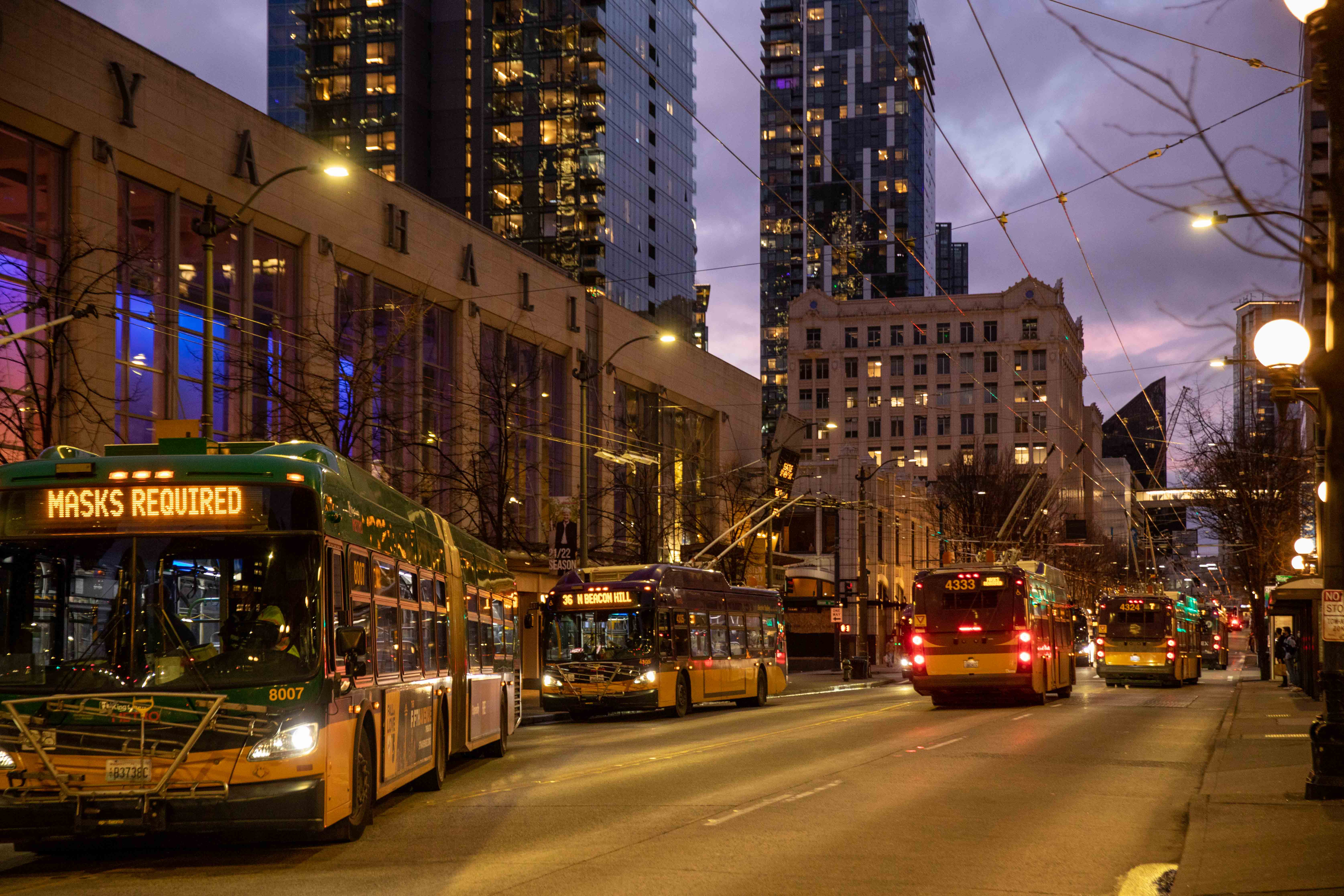 Buses barrel down Third Avenue in downtown Seattle during another quiet rush hour in late January, as the second year of the pandemic comes to an end. Many public transit agencies predict ridership won’t rebound for several years. (Lizz Giordano for Crosscut)

Buses barrel down Third Avenue in downtown Seattle during another quiet rush hour in late January, as the second year of the pandemic comes to an end. Many public transit agencies predict ridership won’t rebound for several years. (Lizz Giordano for Crosscut)

“The immediate impact right off the bat in 2020 was pretty severe,” Kaiser said.

Fare revenue dropped 70% with ridership, and sales tax brought in $100 million less than what was forecasted. And future sales tax projections looked dire. Metro was looking at having to cut a good chunk of service in 2025 and 2026, unless new revenue came along.

Kitsap Transit was also in an expansion phase in the before times, said John Clauson, executive director of the agency. It planned to run buses during more hours of the day and restore Sunday service that was cut during the recession a decade and half ago. The much smaller agency relies more heavily on sales tax — making up 87% of revenues — than the larger ones like Metro, where sales tax pays for about half of operating costs.

“We were kinda keeping our nose above water,” Clauson said of  navigating the agency through the pandemic. “We were being pretty cautious, because we weren’t sure where the economy was going,” he said.

As sales tax rebounded, a second COVID-relief bill reached transit agencies in April 2021 followed by a third one five months later. Many agencies once again used the money on operating costs and COVID-related expenses.

With that money, combined with rising sales tax revenue, King County Metro averted that fiscal cliff. And, like other agencies, such as Community Transit and Pierce Transit, it also used federal money to fill revenue gaps and add money to capital projects budgets that took a hit during the downturn.

“As it stands today we are poised to grow again. Without that federal funding, we would have tapped out our reserves and be trying to refill those buckets,” Ric Ilgenfritz, CEO of Community Transit, which serves most of Snohomish County, excluding Everett, which has its own city system, and very rural areas.

A year before COVID, the agency opened its second bus rapid transit line. Another was in planning stages. 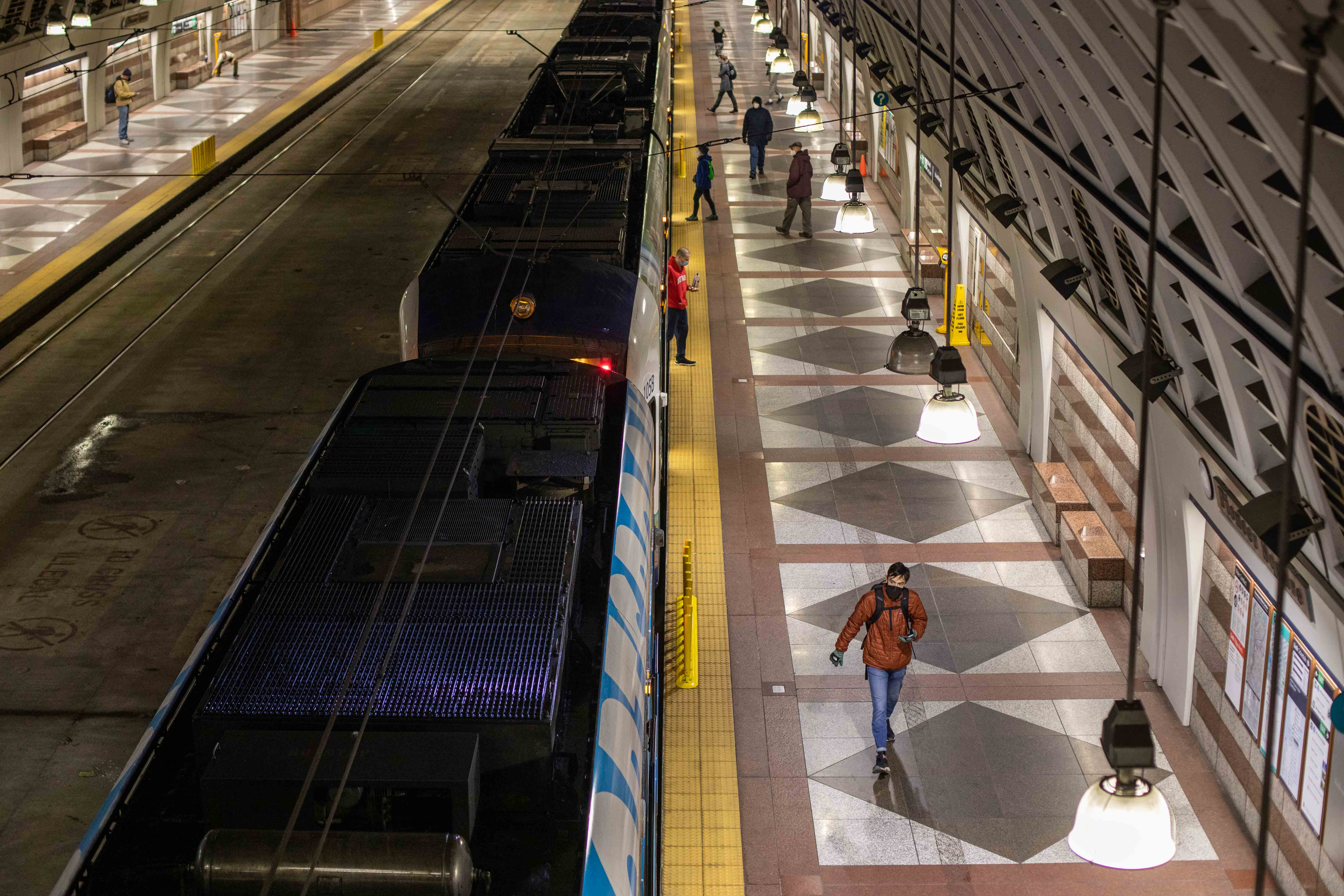 Riders enter and exit trains at the Pioneer Square station in downtown Seattle at the beginning of an early February rush hour. The largest ridership drops generally occurred on commuter routes that focused on shuffling passengers during the morning and evening peak times. (Lizz Giordano for Crosscut)

Riders enter and exit trains at the Pioneer Square station in downtown Seattle at the beginning of an early February rush hour. The largest ridership drops generally occurred on commuter routes that focused on shuffling passengers during the morning and evening peak times. (Lizz Giordano for Crosscut)

One thing all the regional transit agencies have in common is how slowly ridership numbers are rebounding. Many former bus and train riders are still choosing to stay home or are finding a different way to get to work.

Those dependent on public transit to run errands or reach jobs that can’t be done from home never stopped riding buses and trains. These riders were concentrated in areas with high percentages of people of color and low-income residents, according to King County Metro maps.

The biggest ridership drops generally occurred on commuter routes that focus on shuffling passengers from work to home and back during the morning and evening peak times.

“We saw a gradual increase over the course of last year that stalled out with the delta variant showing up,” Ilgenfritz siad.

On Community Transit and Pierce Transit buses, ridership sits around 60% of pre-COVID levels. For Metro and Sound Transit, boardings currently hover around 45% and 55%, respectively.

Sound Transit doesn’t expect ridership to bounce back for several years. The latest forecasts show ridership not rebounding to pre-COVID levels until 2024, the year after the East Link light rail line opens and crosses Lake Washington on Interstate 90. Although that projection is likely to change as the recovery continues or the next variant shows up. The current labor shortage is causing agencies to reduce service.

“Current forecasting reflects best estimates based around significant uncertainty with the rate/timing of ridership recovery during and after the COVID-19 pandemic,” Sound Transit spokesperson John Gallagher said  in an email. “Including not yet knowing the arc of the pandemic or how commuting trends will shake out based on continuing remote work dynamics.”

For Kitsap Transit, ridership remains a little lower — under 40% —  after losing three-fourths of riders at the onset of the pandemic. Clauson, the agency’s executive director, expects ridership to remain below prepandemic levels for several years.

“I’m hopeful we can get to that level in five,” he said.