The plastic structures are made by Everett-based Pallet Shelter and used in several Seattle-area villages. 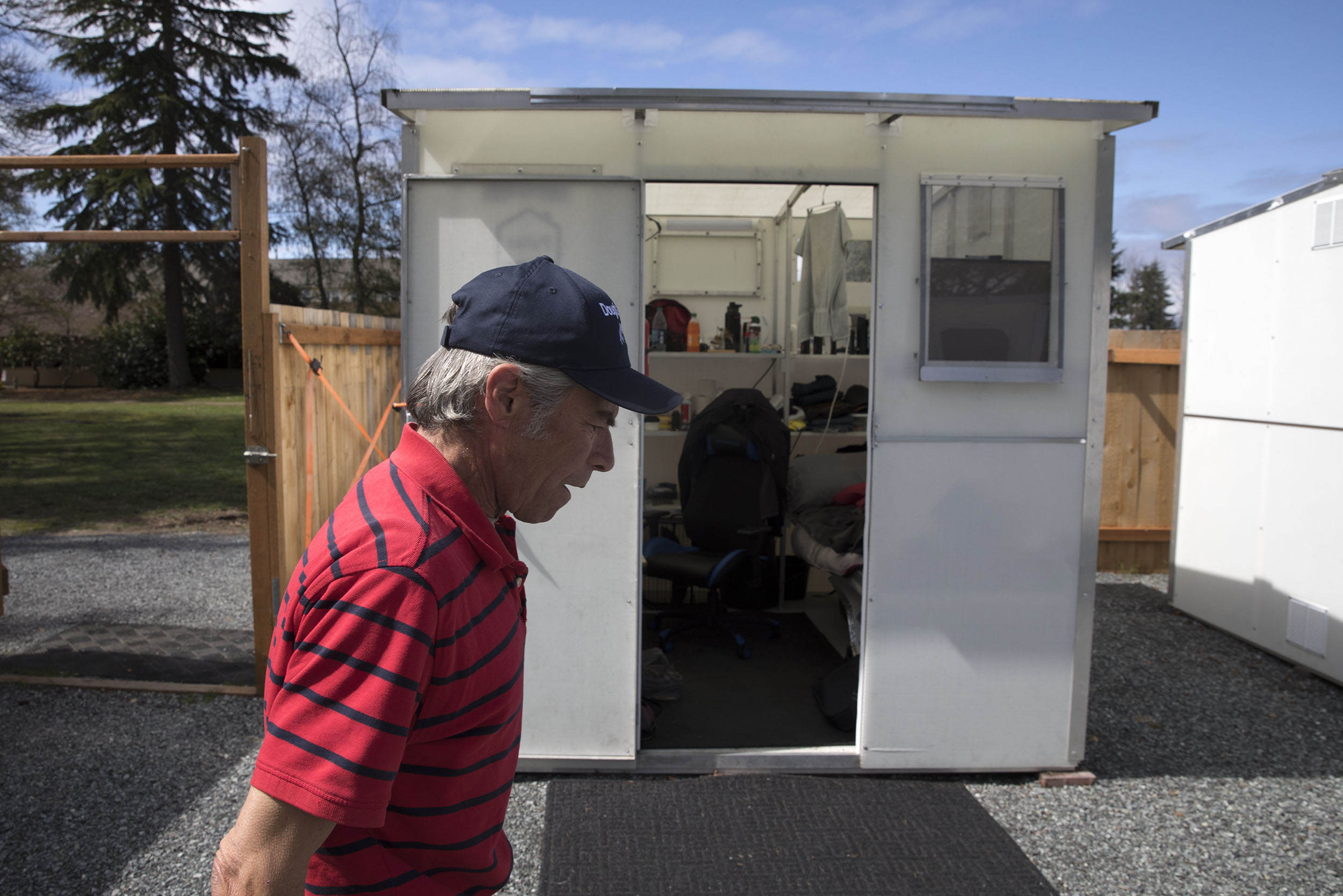 On Monday, March 21, a fire broke out in a tiny-house village near downtown Oakland, California. Within 10 minutes, three of the shelters had completely incinerated and a fourth was damaged. Nobody was injured or killed, but five residents were displaced, losing their belongings in the wreckage of burnt and melted plastic.

According to an Oakland Fire Department spokesperson, the cause of the fire is still under investigation. Residents of the village and other witnesses told Oaklandside that they heard an explosion before the fire broke out.

The 64-square-foot buildings are modeled after emergency shelters that go up in the wake of hurricanes, tornados and other natural disasters. Each Pallet Shelter building has a bed, shelf, window, electricity, heat, air conditioning and a locking door.

Pallet spokesperson Brandon Bills said each unit has a smoke detector, carbon monoxide detector, fire extinguisher and emergency exit through the rear panel. Each unit and village must also be inspected by the local fire marshal before opening.

“Thankfully, first and foremost, this fire did not result in any injuries or worse, which we’re grateful for,” said Bills. “Fire safe doesn’t mean something won’t burn. Look at permanent housing. Houses are full of things that are combustible. What we do is ensure in the unlikely event the shelters are to catch fire [that] people who live inside the structures have adequate time to escape. … Within a matter of literally seconds you have an ability to escape the cabin and get to safety.”

Equally important for safety, Bills said, is that every Pallet Shelter village is managed by a nonprofit or governmental partner who provides on-site case managers. “They’re doing check-ins and wellness checks with the residents,” Bills said. “It’s both for the sake of residents’ transition to permanent housing, but also for safety to make sure people aren’t storing a lot of combustibles in their cabin.”

“[The Oakland fire] is a concern because we don’t want to see loss of life or any loss of belongings,” said Sandra Mears, director of the Jean Kim Foundation, the nonprofit that runs the Good Shepherd tiny-house village.

Mears took over as director five weeks ago and had already begun looking into making changes to the Pallet buildings, not for safety reasons, but to upgrade their electrical capacity and aesthetics. Mears does not like the institutional appearance of Pallet’s buildings. “I started looking at alternatives long before the fire because of space, sizing, aesthetic value, dignity and other reasons,” she said.

Both Catholic Community Services and Chief Seattle Club turned down requests for an interview. In an email, Chief Seattle Club’s James Lovell wrote, “We have not had any fires or concerns, nor have we been informed to take any special preventative steps.”

The tiny-house village model has grown in popularity in recent years as a way to provide transitional housing to people exiting homelessness. Traditional shelter space offers little to no privacy, nowhere to safely store belongings and often doesn’t allow people to bring pets or stay with their partners and families. By contrast, tiny homes give people privacy, a locked space for storage and often allow pets, making them a far more appealing option for someone leaving an unauthorized encampment.

During the height of the COVID-19 pandemic, many cities, including Seattle, turned to tiny-home villages and motel rooms for homeless shelter because traditional, overcrowded shelter spaces were vectors for spreading coronavirus.

Seattle has more than 10 tiny-home villages, many of which are run by the Low Income Housing Institute, which builds wooden shed-style tiny-house cabins. Seattle City Councilmember Andrew Lewis has called for increasing that to at least 20 villages to address the city’s severe homelessness crisis.

Marc Dones, CEO of the King County Regional Homelessness Authority, has expressed skepticism about expanding the tiny-home model. It’s not because of safety concerns but because people sometimes stay in tiny homes for a long time when they are meant to be a form of transitional housing.

Pallet Shelter recently applied for funding from the homelessness authority, but did not receive it. Catholic Community Services did receive funding and plans to use some of it to purchase structures from Pallet.

Asked about the Oakland village fire, Dones said they were not aware of it, but added: “We have fires at shelters all of the time. It’s not just our micro-modular villages, whether it’s the [Low Income Housing Institute] version or Pallet Shelter or whatever it is. There are just shelter fires all the time. It does not impact our decision making [about Pallet] to hear about a fire.”

Last week’s fire in Oakland was not the first in a Pallet Shelter village. In December 2020, a fire destroyed all 20 Pallet cabins in a village in Redlands, California, displacing 40 residents.

The Mercury News reported that Tammy Michele was one of the residents at Oakland’s village who lost her home, along with her cellphone, wallet and car keys. She was inside her cabin when it caught fire, and she managed to escape with her five dogs.

“I was just hysterical,” Michele told the Mercury News. “The walls were just melting.”