UW international students reflect on two years away from home

Students have had to weigh isolation from family against financial pressures and visa complications. International student Cherry Winarto goes on a hike with her dog, Milo, at Lake Serene. She likes hiking in her leisure time with her sisters and friends to keep her spirits up throughout these challenging times. (Courtesy of Cherry Winarto)

From the start of the pandemic, international students studying in the United States had to choose whether to stay or go. Either choice meant paying a big price.

Because of that dichotomy, Cherry Winarto, a 19-year-old senior at the University of Washington, has spent the past three years in Seattle, far from her family in Indonesia. The pandemic has been especially scary for her, in part because both of her parents work as physicians.

He didn't tell her that he tested positive because he said he didn't want to worry her. At the same time, Winarto saw that hospitals in Indonesia were using parking lots as waiting rooms.

“I just can’t imagine how bad the situation was,” she said.

She desperately wanted to go home, but her parents kept telling her to stay in the U.S.

“We don’t want to complicate things,” her parents told her. “What can you do if you go home? Just cry?”

Winarto’s father recovered. Still, she misses home. And she hasn’t been back to Indonesia since 2018, first because of financial pressures, then academic challenges and. in 2020, COVID-19.

Winarto acknowledged that many international students went back home when the pandemic struck the U.S. because parents worried about their children, but her parents wanted her to make a different choice and told her to stay in Seattle because of the complicated process of reapplying for a visa.

She felt especially homesick when she missed family events. Since moving to the U.S. in 2018, three of her family members in Indonesia got married.

Sharece Bunn, assistant director of UW International Student Services, said that while the pandemic has been difficult for schools and universities across Washington state, international students have had it particularly difficult. In a short period of time, students have had to make the right decisions for themselves about what they wanted to do with their future — whether to continue to study in the U.S. or go home.

Some students who had laboratory classes or visa complications had no choice but to stay in the U.S. during the pandemic. These students faced more severe mental health issues, increased living costs, difficulty meeting peers and worry about their families back home. 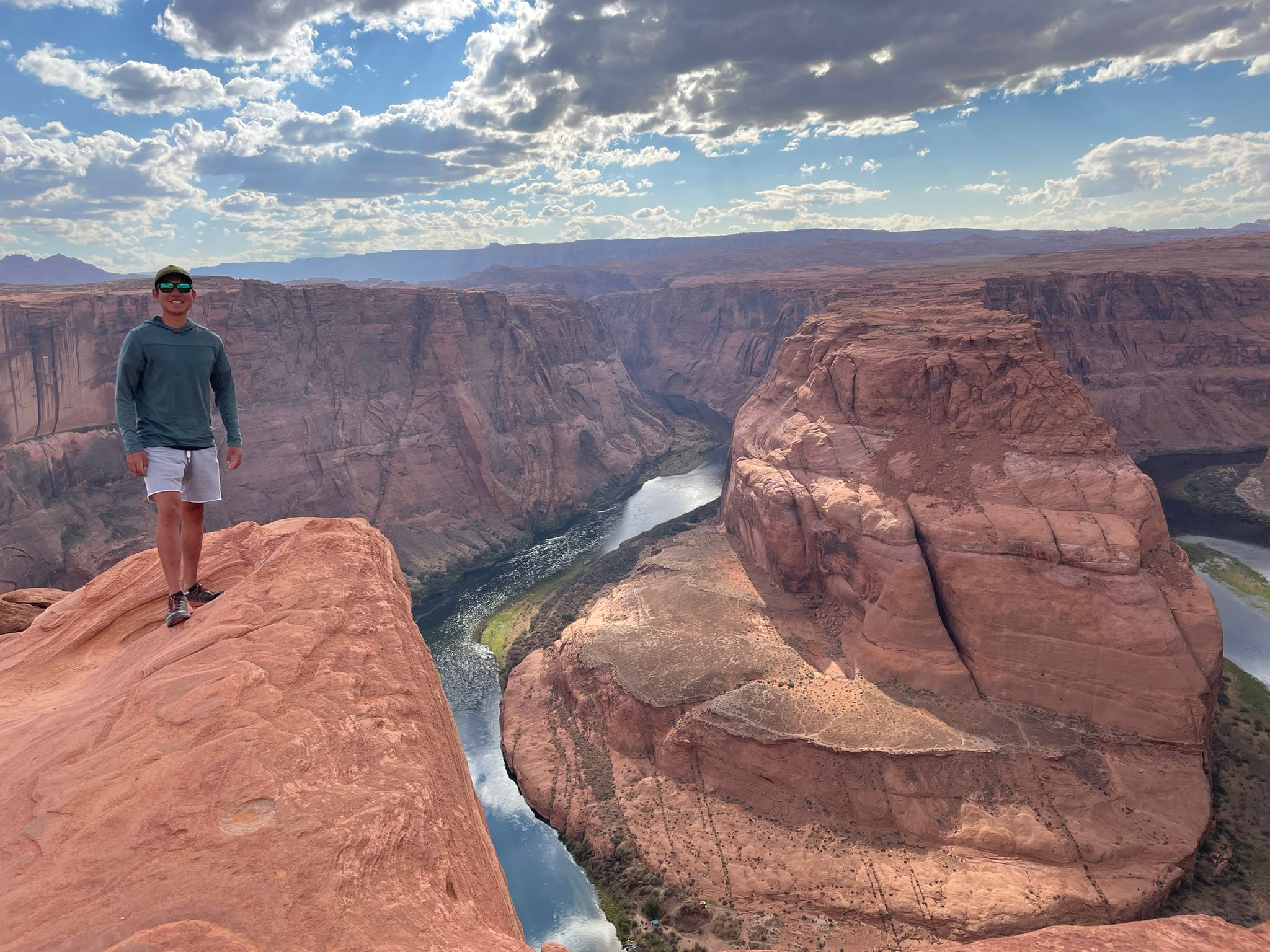 Michael Chan visits Horseshoe Bend, Arizona, in 2020. Chan avoided the worst of the homesickness faced by some of his peers by spending time in the desert Southwest with his host family. (Courtesy of Michael Chan)

Michael Chan visits Horseshoe Bend, Arizona, in 2020. Chan avoided the worst of the homesickness faced by some of his peers by spending time in the desert Southwest with his host family. (Courtesy of Michael Chan)

The Pew Research Center reported a 15% drop in foreign student enrollment at American colleges since 2021, setting off an alarm for local educational funding because international students pay higher tuition, which helps universities balance their budgets. During the 2019-20 academic year, international students contributed about $38.7 billion to the U.S. economy, the National Association of Foreign Student Advisers reported.

Michael Chan, who is from Hong Kong, also decided to stay in the U.S. to continue taking classes through the pandemic.

Chan is a 20-year-old junior double-majoring in finance and marketing. He first arrived in the U.S. in 2017 as a high school exchange student in Denver. After a yearlong return to Hong Kong, he decided to move to Seattle to attend Shoreline Community College in 2019. He has not been home since then.

Chan thought about flying home to Hong Kong when the pandemic started, but he ultimately chose not to because he was not sure whether classes would be taught online or in-person. Financial issues weighed heavily as well.

“If I were to go back to Hong Kong, the plane tickets and hotel expenses would be around $3,000,” he said.

When the pandemic first swept the U.S. in March 2020, Chan chose to stay with his high school host family in Denver, with whom he maintained a close relationship.

Since he was back in Denver, Chan didn’t miss home as much. He did miss friends and family and food, especially when he ate Chinese food in Denver.

“I worked with some exchange students who came here this winter and their first month was online,” Bunn said. “They are only here for one quarter. So the desire to actually be in person and meet friends has been hard for them.”

As a transfer student, Winarto found it difficult to begin a new quarter online.

It was hard to get to know her classmates through Zoom classes since she rarely sees them in person, which makes it harder to find interests in common. She thought about texting them, but then she thought it would be weird to text someone out of nowhere. So she ended up mostly hanging out with friends she already knew before the quarter began.

Aside from academic challenges, international students also have had to contend with COVID travel restrictions. Some places abroad still don’t allow Americans or people who’ve recently stayed in the U.S. For example, Chan’s hometown of Hong Kong has forbidden anyone who stayed in the U.S. for more than three weeks from entering.

The international student advising office has seen its work increase over the pandemic, with more student medical requests for reduced course loads, for example.

To deal with these challenges, Bunn has pushed UW to hire additional advisers to help international students. The University of Washington has six advisers assigned to the International Student Services office, which serves about 7,000 students.

“When I tell people who work at other schools that we only have six advisers, they are shocked,” Bunn said.

Bunn hopes to be able to hire more advisers in the future, but so far she hasn’t been able to get a budget increase to pay for increasing her staff.

Students Winarto and Chan both suggested their fellow international classmates call their parents often to check in and connect. Winarto said she found this especially comforting when she was worried about her parents as COVID numbers climbed in Indonesia.

“When I call my parents, I would joke about coming home, but then I know it’s not happening,” Winarto said.

As a double major in bioengineering and computer science, Winarto has another year of school left. Her parents will likely come to Seattle for her graduation. She hopes COVID will be over by then.

Correction: An earlier version of this story stated that international students account for 23% of University of Washington's student population. They only make up 16% of UW students. The story has been corrected.

Debby Cheng is a student journalist at the University of Washington.