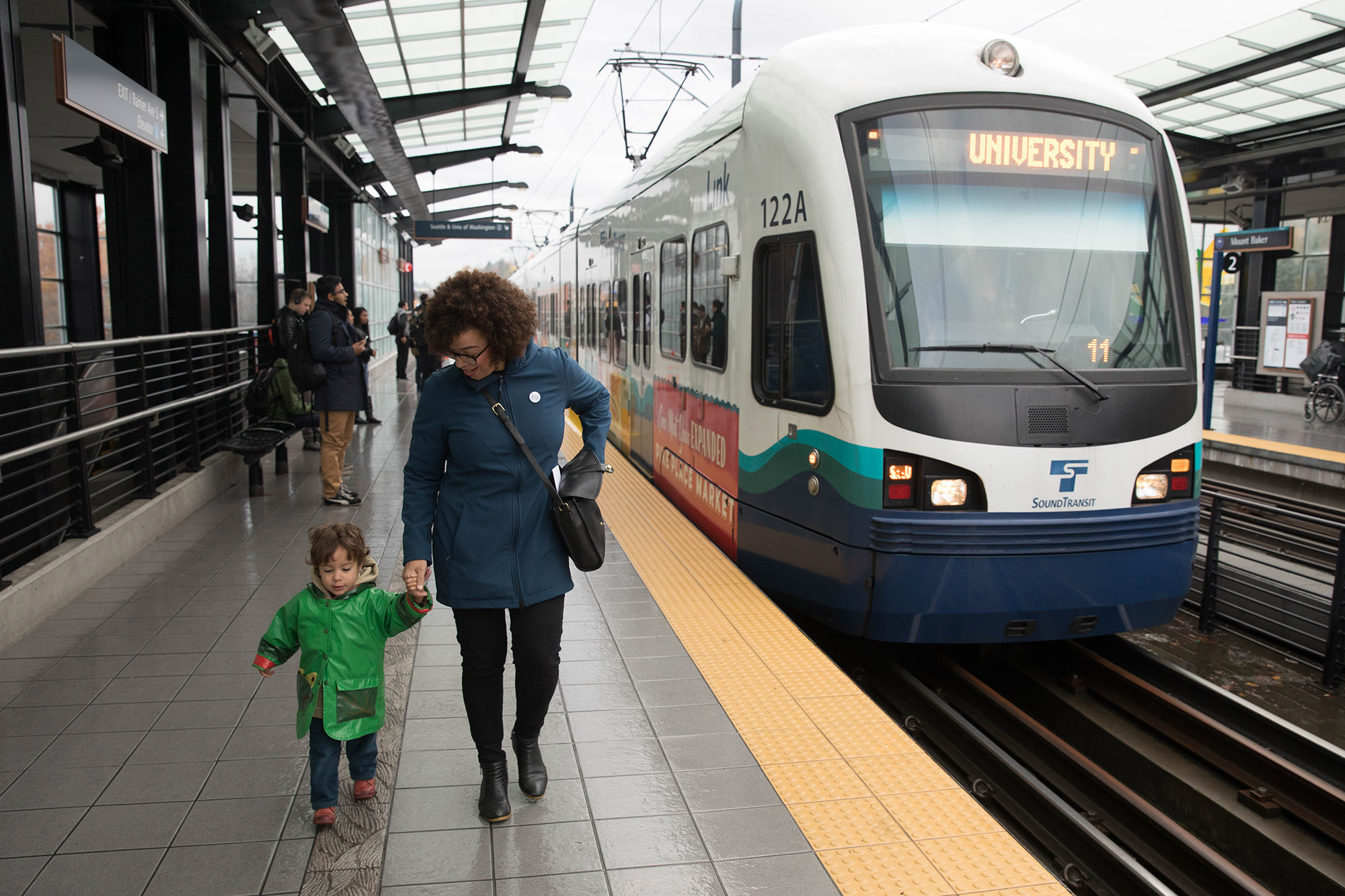 In this Nov. 22, 2017, file photo, then-Seattle City Councilmember Kirsten Harris-Talley, with her 2-year-old son, Malcolm, prepares to board a light rail train at the Mount Baker station, for a short trip to Beacon Hill, where her son attends a local preschool. Washington youth under 18 will soon ride transit free as part of a new transportation package. (Matt M. McKnight/Crosscut)

Washingtonians 18 and under soon won’t have to pay to use public transit across most — if not all — of Washington state.

In March, the Legislature approved $3 billion in additional money for transit that  will roll out over the next 16 years.

But about half of the money comes with a specific condition attached: Transit agencies must let people 18 and under board buses and trains  free.

Agencies that adopt a zero-fare-for-youth policy by Oct. 1 can receive their cut of $1.45 billion in new transit support grants. Agencies that don’t adopt such a policy will not qualify.

The requirement is embedded in a new statewide transportation package, which will spend $17 billion on bridges, highways, transit, and bike and pedestrian improvements between now and 2038.

State Sen. Marko Liias, who chairs the Senate Transportation Committee, said his goal with the youth-ride-free policy is to foster a new generation of transit riders, as well as help lower transportation costs for families across Washington state.

Liias said getting young people in the habit of using public transit should also help curb carbon emissions, which are a major driver of climate change.

“For me and for kids growing up in the suburbs like me, getting your driver’s license at 16 was your ticket to freedom,” said Liias, D-Lynnwood, who grew up just outside Mukilteo in Snohomish County.

“I want to teach the next generation that an ORCA pass is your ticket to freedom,” said Liias, referring to the cards that can be used to pay for transit across the Puget Sound.

Although the state has set an Oct. 1 deadline for transit agencies to adopt zero-fare policies for young riders, Liias said there’s some flexibility about when those policies must actually be implemented. He hopes all transit agencies will start letting riders 18 and under board free by no later than spring of 2023.

Justin Leighton, the executive director of the Washington State Transit Association, said transit agencies around the state are busy developing zero-fare policies that they can put into place by autumn.

While many transit agencies still need their governing boards to approve their specific plans, so far, none of the local transit agencies represented by Leighton’s organization — 30 in all — has decided to forgo the state grant money by refusing to develop policies to let people 18 and under ride free, he said.

Many agencies actually want to start letting kids board free even sooner than Oct. 1 — ideally, by the time a new school year gets underway, Leighton said.

Other agencies may take a few extra months to stop charging fares, as they figure out how to implement the new policy, he said.

“The big problem really is, how do we verify age?” Leighton said. He said transit agencies don’t want drivers and other transit workers to have to check IDs to confirm riders’ age during the boarding process.

“We also don’t want to be getting into fights with 17-year-olds who look like they’re 20,” Leighton added.

Ina Percival, supervisor of marketing and business development at King County Metro, said even if people under 18 ride free, Metro must track those riders to ensure the agency is providing adequate service and meeting riders’ needs. Transit agencies also must report annually how many times young people ride free under the new program, which will require some kind of tracking system, she said.

To make that happen, Metro is now brainstorming ways to get ORCA cards into the hands of all young people, which will most likely involve partnering even more closely with schools, Percival said.

Metro is also looking at ways it could potentially let riders who are 18 and under use a specialized mobile app to board buses and trains, Percival said.

“The goal here is really to empower young people to be able to use transportation to benefit themselves and their families,” Percival said. That includes helping kids get to and from extracurricular activities and jobs, she said.

State Rep. Andrew Barkis, R-Olympia, said he remains concerned about the difficulty of implementing the program, as well as how much it will cost in terms of lost fare revenue.

Barkis said providing more state money for transit while requiring fewer people to pay to ride shifts the burden of paying for transit onto people who may never use it. That includes people who live in rural areas, where there are few transit options available, he said.

“We’re moving to a situation where a component of how we fund our transit is being removed, and that’s fare box recovery,” said Barkis, the ranking Republican on the House Transportation Committee.

For the transit agencies themselves, the money they expect to receive through the new state grant program is projected to far exceed the cost of letting kids and 18-year-olds ride free, said Matthew Sutherland, advocacy director at the Transportation Choices Coalition, a group that supported the new policy.

King County Metro, for instance, stands to receive about $31 million per year from the new state grant program, but estimates it will lose only about $10 million in revenue each year from lost fare collections.

Pierce Transit, meanwhile, projects losing $1 million in fare revenue each year, but expects to receive about $8.2 million a year from the new grant program.

“It is an absolute win-win for every transit agency,” Sutherland said. “They get money to help support their operations, and they get to increase affordability and access for kids.”

The zero-fare for 18 and under program must extend to every type of transit service an agency offers, not just buses and trains. Ferries will be included, too.

The money can’t be used to merely supplant local funding. That means a transit agency can’t cut local sales taxes that currently pay for transit, then use the state grant money to backfill the lost revenue. 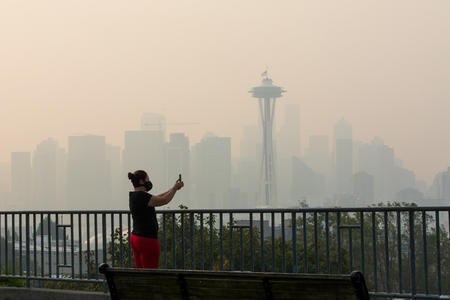 A new study concludes that climate-boosted wildfires are significantly altering carbon monoxide levels in the region — and the effects reach far beyond the Cascades.