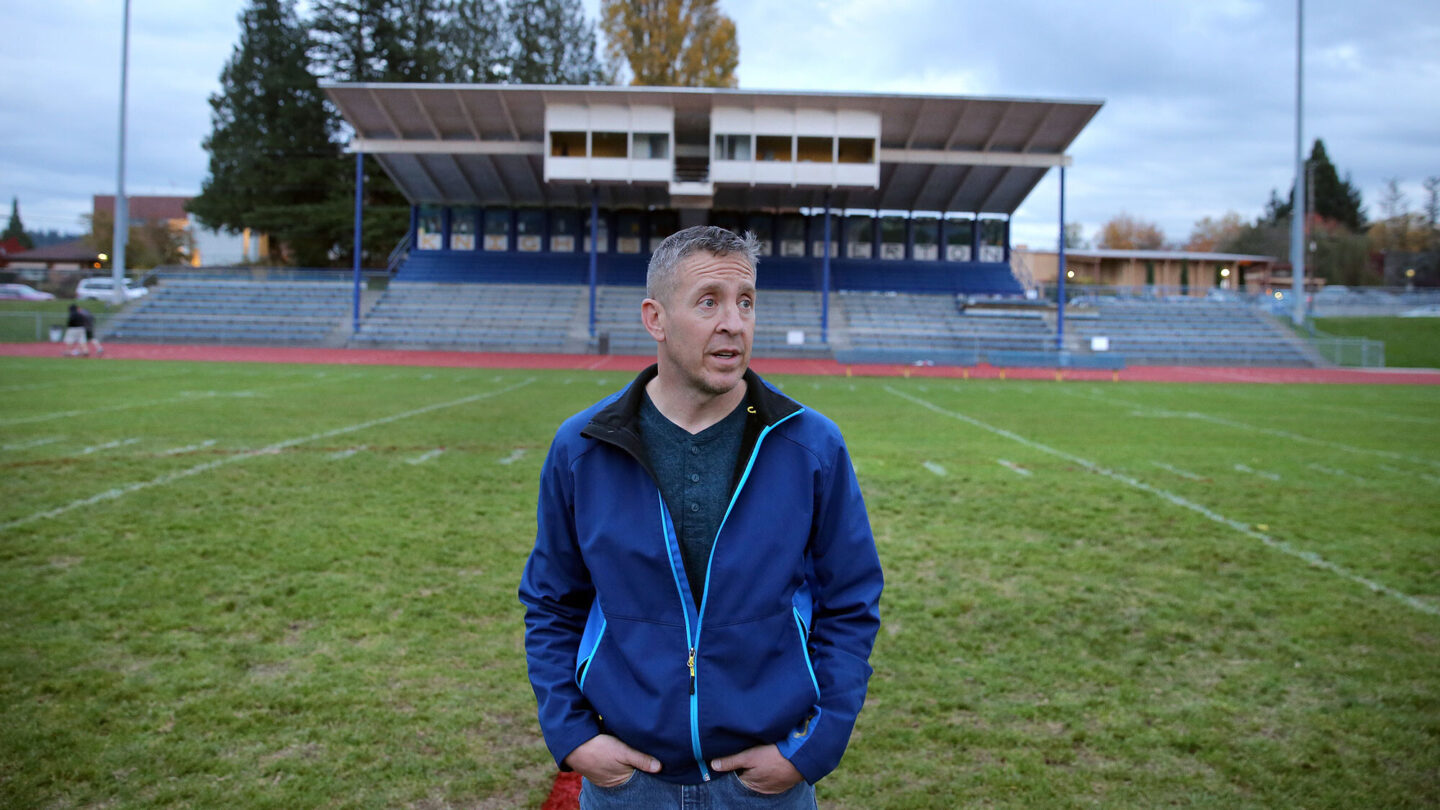 Former Bremerton High School assistant football coach Joe Kennedy stands at the center of the field on the 50 yard line at Bremerton Memorial Stadium, Nov. 5, 2015. Kennedy is in a conflict with the Bremerton School District over his silent prayer after football games. (Larry Steagall/Kitsap Sun)

The U.S. Supreme Court ruled on Monday that a former Bremerton High School football coach had a constitutional right to pray alongside student athletes on the 50-yard line after games.

The opinion, written by Justice Neil Gorsuch and endorsed on a vote of 6-3, argued the First Amendment right to free speech and its protection for free exercise of religion both protected the coach’s right for “private personal prayer” on the field.

“The Free Exercise and Free Speech Clauses of the First Amendment protect an individual engaging in a personal religious observance from government reprisal; the Constitution neither mandates nor permits the government to suppress such religious expression,” the opinion said.

“After seven long years, Coach Kennedy can finally return to the place he belongs – coaching football and quietly praying by himself after the game,” said the coach’s attorney Paul Clement in a prepared statement released by First Liberty.

Attorneys for Americans United for Separation of Church and State, which represented the Bremerton School District, said the ruling set a “dangerous precedent.”

“It ignored the religious freedom of students and families,” said Rachel Laser, president and CEO of the group, in a prepared statement.

Kennedy has stated that he wants his old job back. The Bremerton School District in a statement said that it looks forward to moving past the “distraction” of the case. The statement did not mention the possibility of a future job for Kennedy, who moved to Florida several years ago.

“In light of the court’s decision, we will work with our attorneys to make certain that the Bremerton School District remains a welcoming, inclusive environment for all students, their families and our staff.”

Lower courts had sided with the school district, but the case was watched closely to see if the conservative majority on the Supreme Court would turn the tide in favor of Kennedy and set precedents that challenge the long-standing separation of church and state in public schools.

Kennedy v. Bremerton School District is just one case before the Supreme Court this year centered on religion in public schools. In another case, Carson v. Makin, the Supreme Court decided that if the state of Maine allows some public funding of rural private schools it must also allow that money to be spent for private-school tuition.

Kennedy’s attorney told the court that the school district violated the coach’s First Amendment rights by punishing him after he continued to pray on the field. While Kennedy regularly prayed on the field after games and was joined by students, he and his attorneys insisted that it was a private prayer and not in his capacity as a coach. At the end of the 2015-16 school year, Kennedy’s contract was not renewed and he did not reapply for his job.

The district argued that Kennedy, as a coach, violated the Constitution’s establishment clause preventing public officials from endorsing one religion over another. Attorneys for the school district showed photos of Kennedy praying while holding a football helmet and presented testimony from a Bremerton player who said he felt pressured to join Kennedy when he didn’t want to.

University of Washington law professor Robert Gomulkiewicz told Crosscut before the opinion was released that it’s possible that the ruling in Kennedy v. Bremerton School District could offer guidance to teachers and coaches on appropriate expressions at school.

“Students, teachers and coaches can bring those free-speech rights into the school. And so for those of us who like freedom of expression, that's a good thing,” Gomulkiewicz said.

But while teachers’ and coaches’ rights to free expression have already been accepted, religious expression makes things complicated for a number of reasons.

“The Supreme Court for the last 100 to 200 years is trying to figure out what does it mean to establish religion,” he said. “When is something the individual expression of a teacher or coach or student, and when has it become the state establishing a religion?”

Americans United legal director Richard Katskee, in a press conference after Monday’s opinion, said that the question for school districts is now murkier if a teacher or coach has a lot of leeway in saying that an act of prayer in front of students was private.

“That’s going to be a really difficult line to negotiate,” he said.

Laser added that the opinion “ignores the reality of a coach’s power over his students or her students.”

Many of the justices’ questions during oral arguments in April centered on whether student athletes felt pressure to join the prayers and how private Kennedy's prayers were.

During the oral arguments, Justice Brett Kavanaugh, who ultimately joined with the majority for Kennedy, asked Kennedy’s attorneys about the unspoken pressure to join with a coach in prayer.

“What about the player who thinks, if I don't participate in this, I won't start next week, or the player who thinks, if I do participate in this, I will start next week, and the player, like, wants to start?” Kavanaugh asked. “Because every player's trying to get on the good side of the coach. And every parent is worried about the coach exercising favoritism in terms of the starting lineup, playing time, recommendations for colleges, etc.”

Other justices questioned whether the district could say definitively that Kennedy was acting as a coach and not as a private citizen when he knelt down to pray in public.

“If we disagree with you that this was government speech, so if we think this was private speech, we don't even get into the establishment clause because there's no state action, right?” Justice Amy Coney Barrett asked the school district’s lawyers. Barrett also joined with the majority of the court.

In the opinion released Monday, the court majority concluded that “Kennedy did not offer his prayers while acting within the scope of his duties as a coach,” because he was not engaged in any other speech covered by his job description.

In Justice Sonia Sotomayor’s dissent, she wrote that the prayers had occurred while he was in the middle of post-game responsibilities, and that students reported feeling social pressure to join the coach’s long-standing practice of prayer after the game.

“Today’s decision is particularly misguided because it elevates the religious rights of a school official, who voluntarily accepted public employment and the limits that public employment entails, over those of his students, who are required to attend school and who this Court has long recognized are particularly vulnerable and deserving of protection,” Sotomayor wrote.

Since Barrett replaced the late Justice Ruth Bader Ginsburg on the high court, there has been a clear conservative majority, and many observers before the opinion was released predicted an advantage for Kennedy, as well as for the parents who sued the state of Maine.

Laser, of Americans United for Separation of Church and State, linked the outcome in the two schools’ cases with the outcome of Dobbs v. Jackson Women’s Health, which overturned the constitutional protection of abortion access, leaving it a matter for the states to decide, as an extension of a push toward codifying a conservative religious agenda.

“Your rights are not safe.”

The Supreme Court also ruled earlier this month against the owner of the Smuggler’s Inn in Blaine, near the Canadian border, and blocked him from suing a Border Patrol agent for allegedly violating his First and Fourth Amendment rights.

Updated 2:21 p.m.: This story has been updated with additional reporting, including quotes from the dissent and from the First Liberty Institute and Americans United for Separation of Church and State.