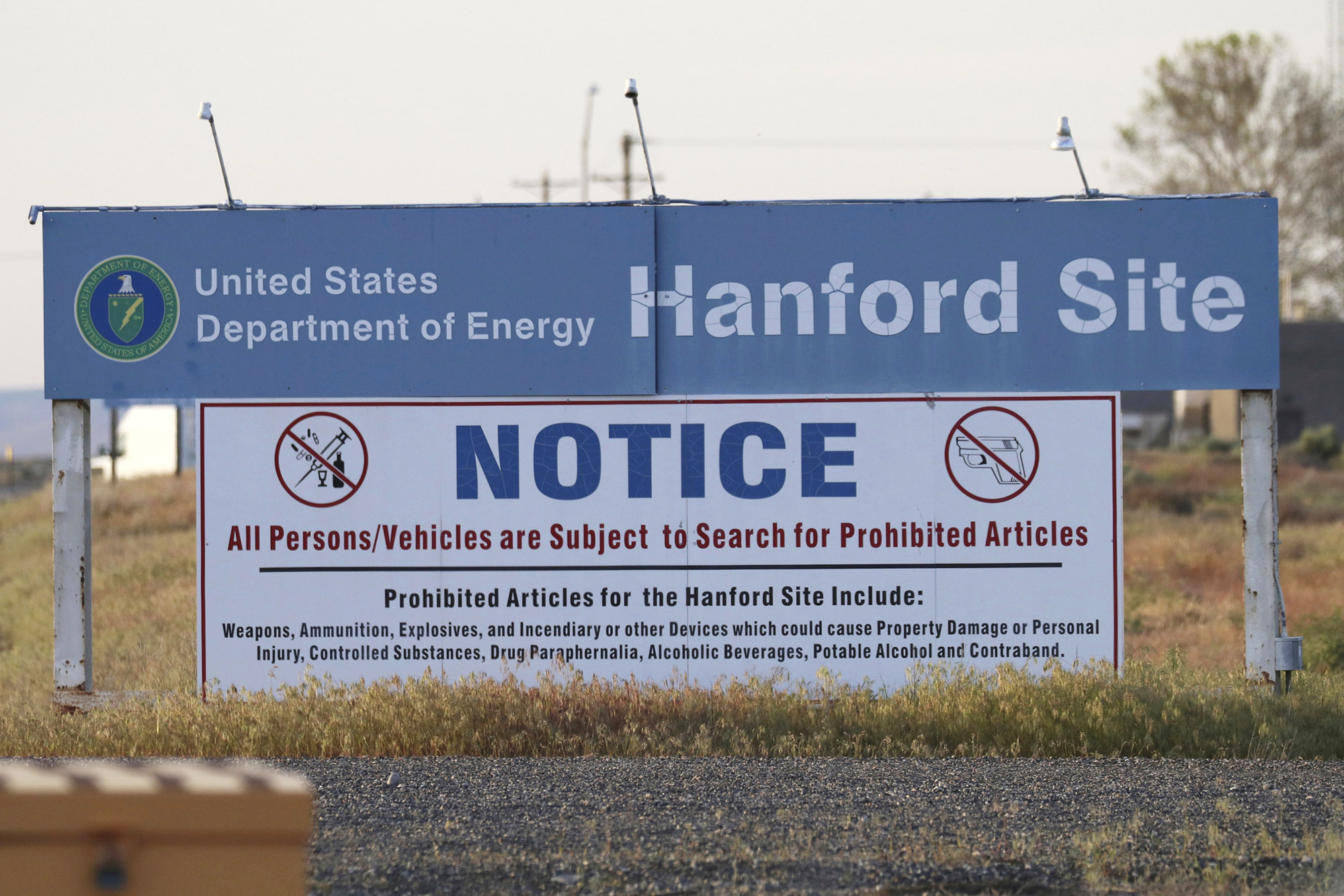 In this May 9, 2017, file photo, signs are posted at an entrance to the Hanford Nuclear Reservation in Richland, Wash. (AP Photo/Manuel Valdes)

“Because the Legislature already fixed the issues the federal government raised, there is little practical impact in Washington as a result of this ruling,” said Washington Attorney General Bob Ferguson in a press release. “Hanford workers, and all others working with dangerous radioactive waste, remain protected. The federal government has not challenged this new law. If they do, we will defend these protections all the way back up to the Supreme Court again if we have to.”

The 2018 Washington law covered by Tuesday’s ruling required the state Department of Labor & Industries to assume any cancers, neurological problems and respiratory illnesses claimed by past or current employees of Hanford contractors can be linked to chemical and radiological exposures at the most radiologically and chemically polluted spot in the Western Hemisphere.

House Bill 1723, passed by the Legislature in 2018, said workers do not have to prove that their illnesses were not caused by factors outside of the 584-square-mile Hanford Nuclear Reservation adjacent to Richland in Eastern Washington. They would not have to link their illnesses to exposures to specific chemicals or radiological substances.

Roughly 1,500 chemical and radiological substances used in the Cold War production of plutonium for atomic bombs can be found in 177 underground tanks containing 56 million gallons of highly radioactive wastes; in numerous defunct processing buildings and waste burial sites; and in contaminated ground water.

The federal government appealed the 2018 state law, arguing that it unfairly singles out a specific location and its contractors, exposing Hanford and its companies to extensive legal damages not faced by other locations or corporations in Washington. The federal government lost in U.S. District Court in Eastern Washington and at the U.S. Ninth Circuit Court of Appeals before appealing to the U.S. Supreme Court. The case was argued before the Supreme Court on April 18 of this year.

On Oct. 6, 2021, 38 Washington Republican and Democratic state legislators sent a letter to the Biden administration, unsuccessfully requesting that it drop the appeal to the Supreme Court.

“Our state residents who suffer from terrible, painful, and debilitating diseases known to be linked to exposure of toxic chemicals were having well-documented difficulties overcoming objections from the federal contractor to access benefits from our state industrial insurance program. Numerous efforts to address these problems with the contractor were unsuccessful. …  [The 2018 law] simply improves the standards for sick Hanford Nuclear site workers to qualify for our state industrial insurance benefits,” the letter said.

“To put the point more specifically, if discrimination is permissible here, what prevents Washington from bestowing a windfall upon its residents through an especially generous workers’ compensation scheme financed exclusively by the federal government? Washington’s voters would not mind; they would not pay for the costs of the scheme,” said the unanimous decision penned by Justice Stephen Breyer.

In January 2022, state Sen. Karen Keiser, D-Des Moines, introduced a bill that eliminated all references to Hanford in the 2018 law and changed that law’s language so that it covers “exposed workers” working at a “radiological hazardous waste facility.”

Keiser’s bill was introduced specifically to make the issue before the Supreme Court moot, said Keiser and Washington Solicitor General Noah Purcell. “No matter how the Supreme Court ruled, the benefits would continue,” Purcell said.

Keiser said the bill's intention was to eliminate the issue at the heart of the appeal. "When we received the information that this was going to the Supreme Court, we knew [the 2018 law] would be repealed," Keiser said.

If the Supreme Court had intended to uphold the lower courts' decisions, it would not have accepted the case, she said.

During oral arguments, the state contended that the new law rendered the issue moot in an unsuccessful hope that the Supreme Court would punt on the matter, Purcell said.