For some, community court reduces jail bookings by 87%

The King County program was founded as an alternative to the traditional justice system, emphasizing rehabilitation over incarceration for those with low-level offense. 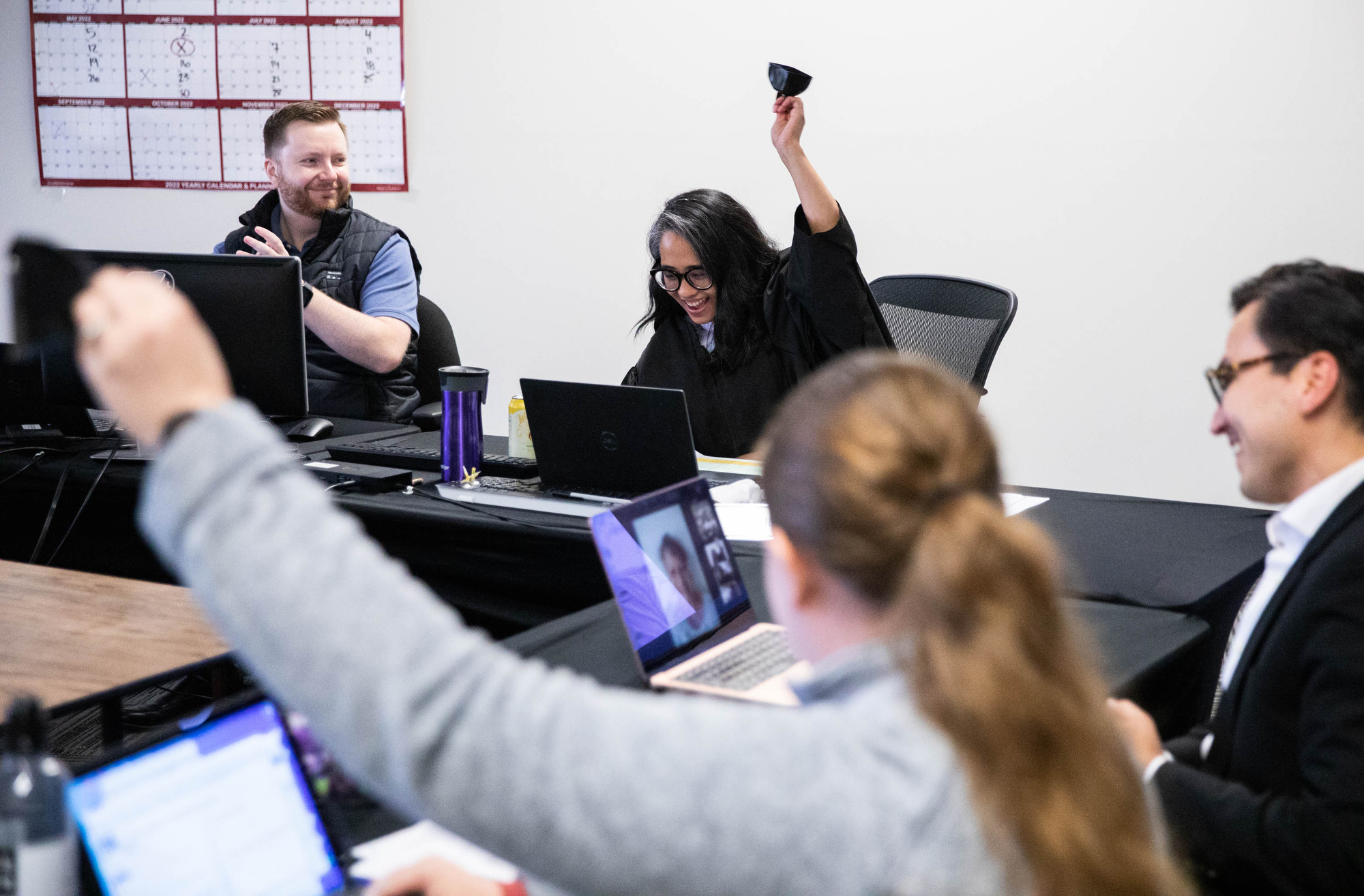 Judge Leah Taguba rings a bell for a participant on the “Rocket Docket,” which means they’re on a list of those that did extremely well over the last week, at Auburn Community Court on Thursday, August 11, 2022. In the last four years, King County has founded four community courts with the intention of giving an alternate criminal justice route for those whose offenses are minor and often the result of their life circumstances. (Amanda Snyder/Crosscut)

Sitting at a square-shaped arrangement of folding tables inside a one-story building in Auburn, Adriana Perez explained to a judge, prosecutor and two defense attorneys seated around her about the treatment plan for the ulcers on her legs.

“They’ll clean them, and scrape them, wrap them,” Perez said on a recent Thursday.

The wounds were the result of seven years of IV heroin use and now were not only extremely painful, but needed to be treated so she could go into drug addiction treatment, a requirement as part of her participation in the community court in Auburn.

“That’s going to be a really challenging time,” he told Perez. “That's a lot of physical pain, emotional pain. So maybe next week you can tell us if there's a way that we can support you through that process.”

For Perez, who was referred to the community court after drug paraphernalia was found in her car, this type of compassion has kept her coming back to court every Thursday since June.

She has struggled with drug addiction for 15 years and was living in her car when she was charged. But since opting into community court, she has been able to get a place to live, an appointment at a local wound care center and an ORCA card.

“If I wanted to, I could just quit and go back to mainstream court and just take the paraphernalia charge. … [But] they just believe in me, so it makes me believe in myself,” she said during a phone interview.

Four years after the King County District Court’s first community court was founded as an alternative to the traditional justice system – emphasizing rehabilitation over incarceration for those with low-level offenses – the program has grown to four community courts and accompanying resource centers and seen widespread success. 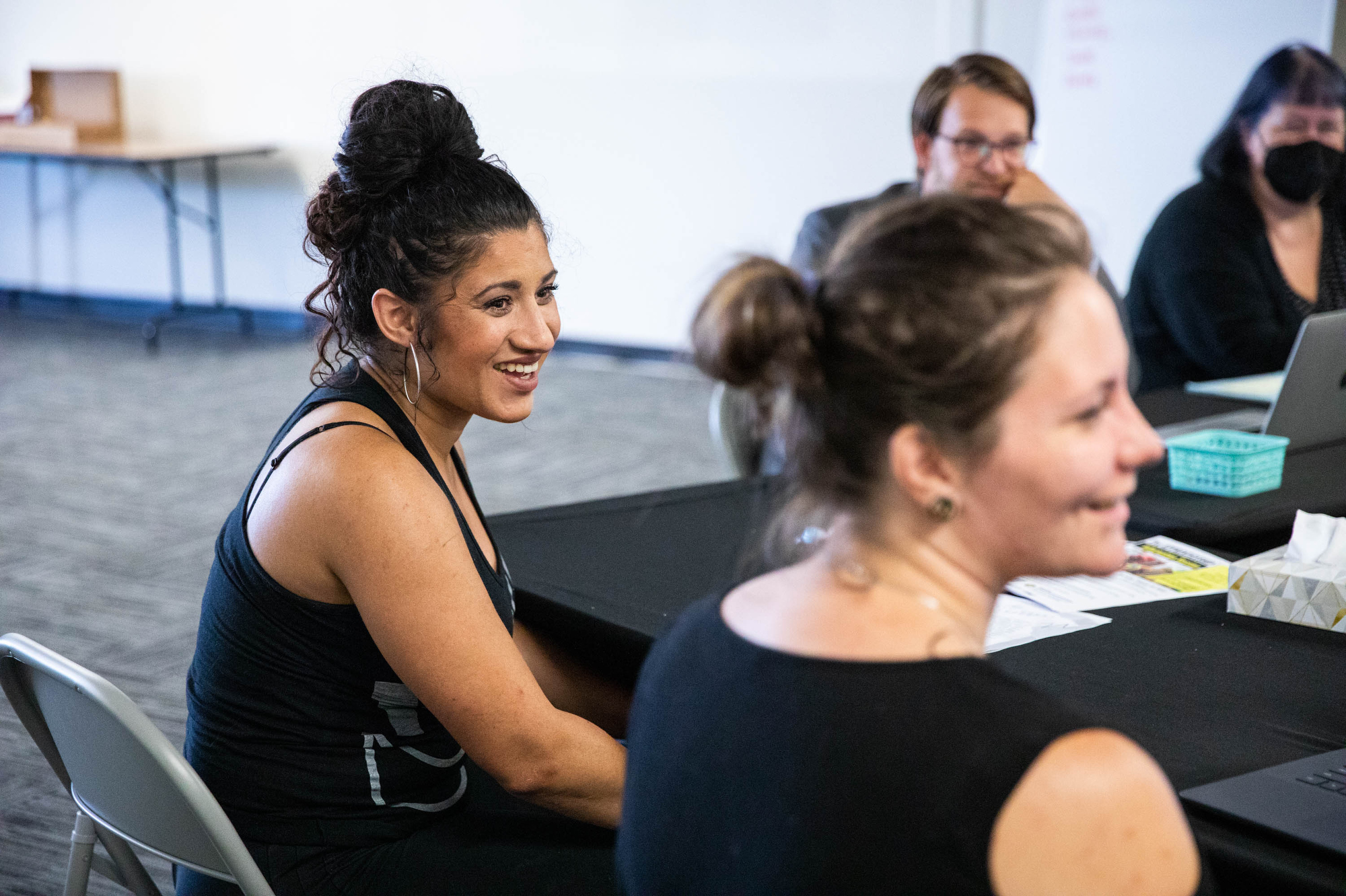 From 2018 to now, of the 226 people who left community court in Redmond, Auburn and Shoreline (Burien was not included as it has been on pause since 2020 due to the pandemic) 84% graduated, according to court data shared with Crosscut.

According to the 2021 King County Mental Illness and Drug Dependency (MIDD) report, by the third year after enrolling in community court in King County, participants saw 87% fewer jail bookings compared to the year before enrollment.

The resource centers, which are open at the same times and in the same buildings as the community courts they’re affiliated with, have also stayed full of treatment and housing providers, including the Department of Social and Health Services (DSHS) and United Healthcare, as well as representatives available to help with food assistance, transportation and job acquisition.

But the courts haven’t been completely immune to setbacks.

Months later, they reopened as a completely virtual system. But some participants didn’t have a smartphone or any other way to access the system virtually, which made their participation impossible in some cases, she said. 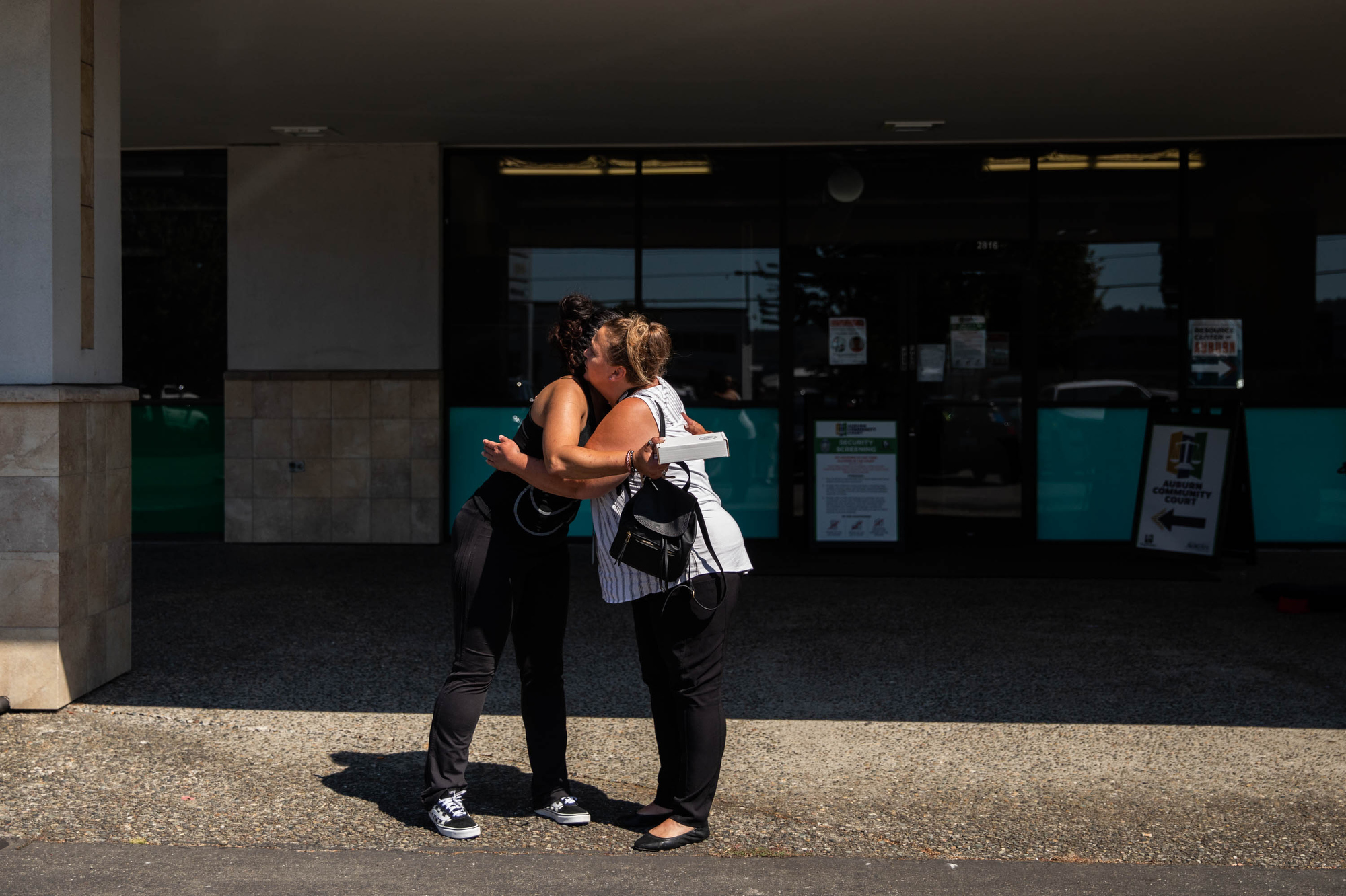 Adriana Perez, a participant in Auburn Community Court, left, hugs her sponsor outside the court on Thursday, August 11, 2022. (Amanda Snyder/Crosscut)

Adriana Perez, a participant in Auburn Community Court, left, hugs her sponsor outside the court on Thursday, August 11, 2022. (Amanda Snyder/Crosscut)

The community courts system is paid for through the sales tax in King County. But during the pandemic, with the shuttering of restaurants and most other businesses, the county’s therapeutic courts saw nearly a 50% decrease in their budget, according to Welbaum. They were forced to close the community court in Burien and lay off a coordinator.

Today, with their funding restored (it’s unclear when the Burien community court will reopen), the courts and their accompanying resource centers now operate in a hybrid model, with both participants and resource providers sometimes attending via videoconference.

The switch has meant that those in rehab centers or with transportation challenges can still make it to court. It has also increased the availability of resource providers, as they can help participants by simply joining the Zoom link. 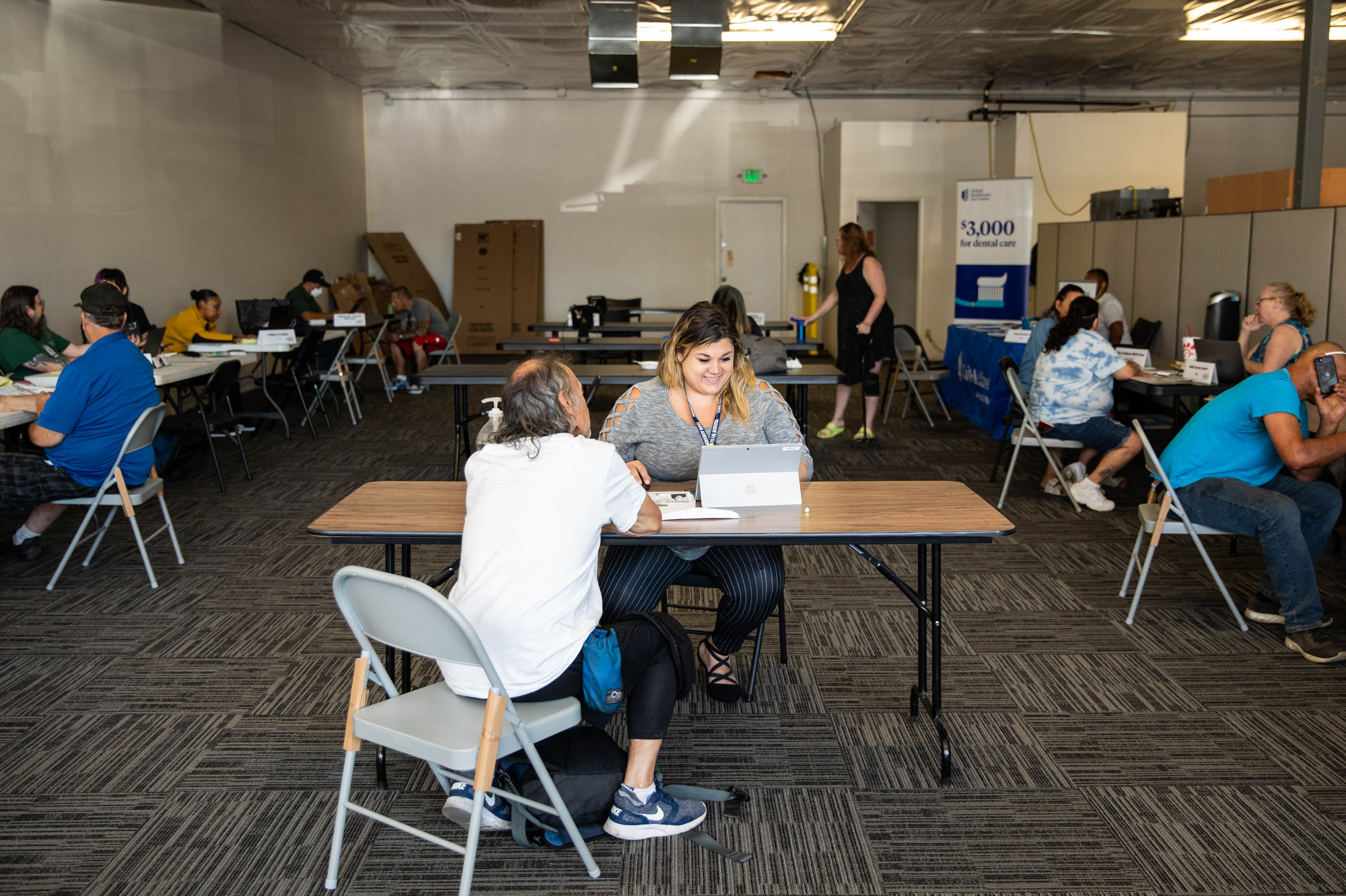 Community members and participants in Auburn Community Court use the resource center of Auburn to learn about a variety of services such as dental, transportation and housing on Thursday, August 11, 2022. The center is located next-door. (Amanda Snyder/Crosscut)

Community members and participants in Auburn Community Court use the resource center of Auburn to learn about a variety of services such as dental, transportation and housing on Thursday, August 11, 2022. The center is located next-door. (Amanda Snyder/Crosscut)

The King County community courts are just some of the dozens of similar courts that have popped up in cities across the U.S. over the past nearly three decades. Beginning with a court in New York City, overall the programs aim to cut down on crime and needless incarceration by taking a more individualized and rehabilitative approach to justice. (In 2020, Seattle added its own community court for those with low-level misdemeanor charges.)

The prosecutor’s office normally starts the process by identifying possible community court participants. They typically have such charges as theft or trespassing, while those with driving, domestic violence or other violent offenses are not eligible, explained Rebecca Mueller, city of Redmond supervising prosecutor.

The defendant would then observe the court and participate in an intake assessment. Later, the defense and prosecution would agree to a Stipulated Order of Continuance, or SOC, a contract between the city and defendant in which the defendant would need to agree to a series of conditions and treatments, such as no drugs and alcohol, a mental health evaluation, community service and attending court each week. (Jail does not typically have any role in community court.) The individual then has the option to opt-in.

The contract does involve giving up some rights, explained Welbaum. If they’re not successful in the program, they won't get another trial. A judge would look at the police record and determine their guilt or innocence.

But if they do make it through the typically three- to six-month process, their case will be dismissed. 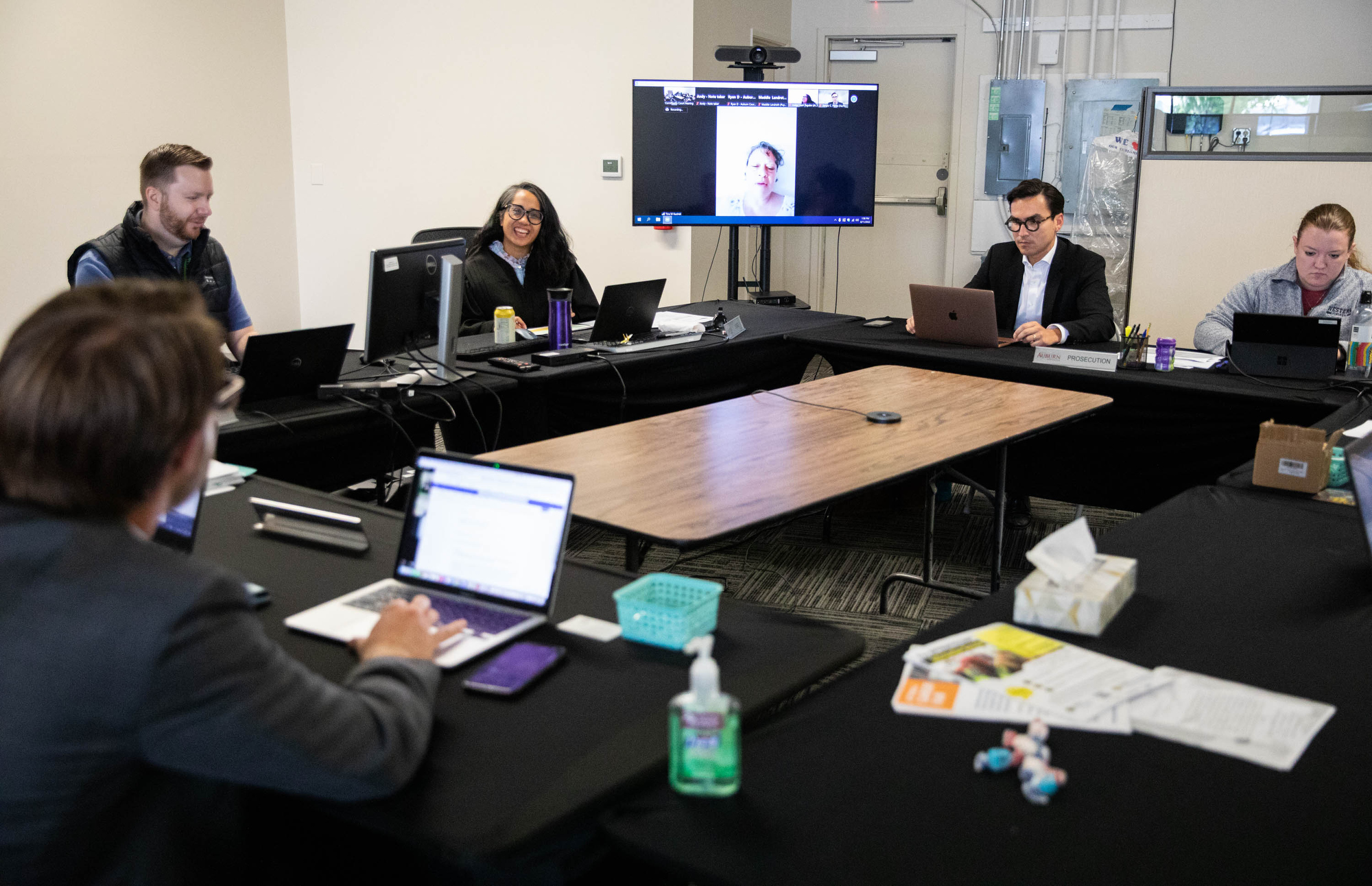 Melissa Duarte is set to graduate from the community court in Redmond next month.

She enrolled in the court system after accruing seven warrants for stealing in order to pay for her family to sleep in a hotel room. Now, she has been able to access therapy every week, get a phone and an ORCA card and, mere days before her partner is due to give birth, receive a Section 8 housing voucher.

“They’ve become my family; the people that I turn to if I have issues,” said Duarte. “They’re not just there for whatever you’re there for. They’re there to support you; to be there for you; to lift you up when you’re down.”

Judge Leah Taguba, who previously served as a prosecutor for more than 15 years, said she joined the community court in Auburn after noticing how often she came in contact as a prosecutor with “generally good people” who found themselves in bad situations. She said she also noticed the way minorities were being impacted.

“As a woman of color, and seeing communities of color being disproportionately represented in the criminal justice system, I've really felt strongly that I think we can do better. … With these systems of oppression in place, finding alternatives is going to be one of the ways that we can combat this systemic imprisonment of people of color.”

According to a 2021 King County Auditor’s Office report, between 2017 and 2019 Black people represented 7% of the King County population, but they made up 36% of the people in the county’s adult jails.

In King County’s community courts, 67% of participants were white, while 14% were Black, according to the 2021 MIDD report.

Last year, the community courts were awarded an equity and inclusion grant for training to look at potential inequities related to everything from eligibility criteria to program outcomes, according to Welbaum.

For Perez, the Auburn community court has had a very positive impact on her life. She’s now working on a parenting plan to help her with her 12-year-old daughter, who currently lives with her father, and on accessing drug treatment.

During the recent Thursday court session, defense attorney Anne Dederer asked her how she was doing.

“I feel like there's like, hope now. Before, I was just so depressed, and I didn't realize how much depression really weighs on your body. And so now I feel like I'm accomplishing stuff and a purpose. I don’t know, I feel more energized, more happy.”