Why WA cherries are so expensive this summer

This season's crop was even smaller than predicted. A late harvest may provide one last chance to enjoy the fruit. 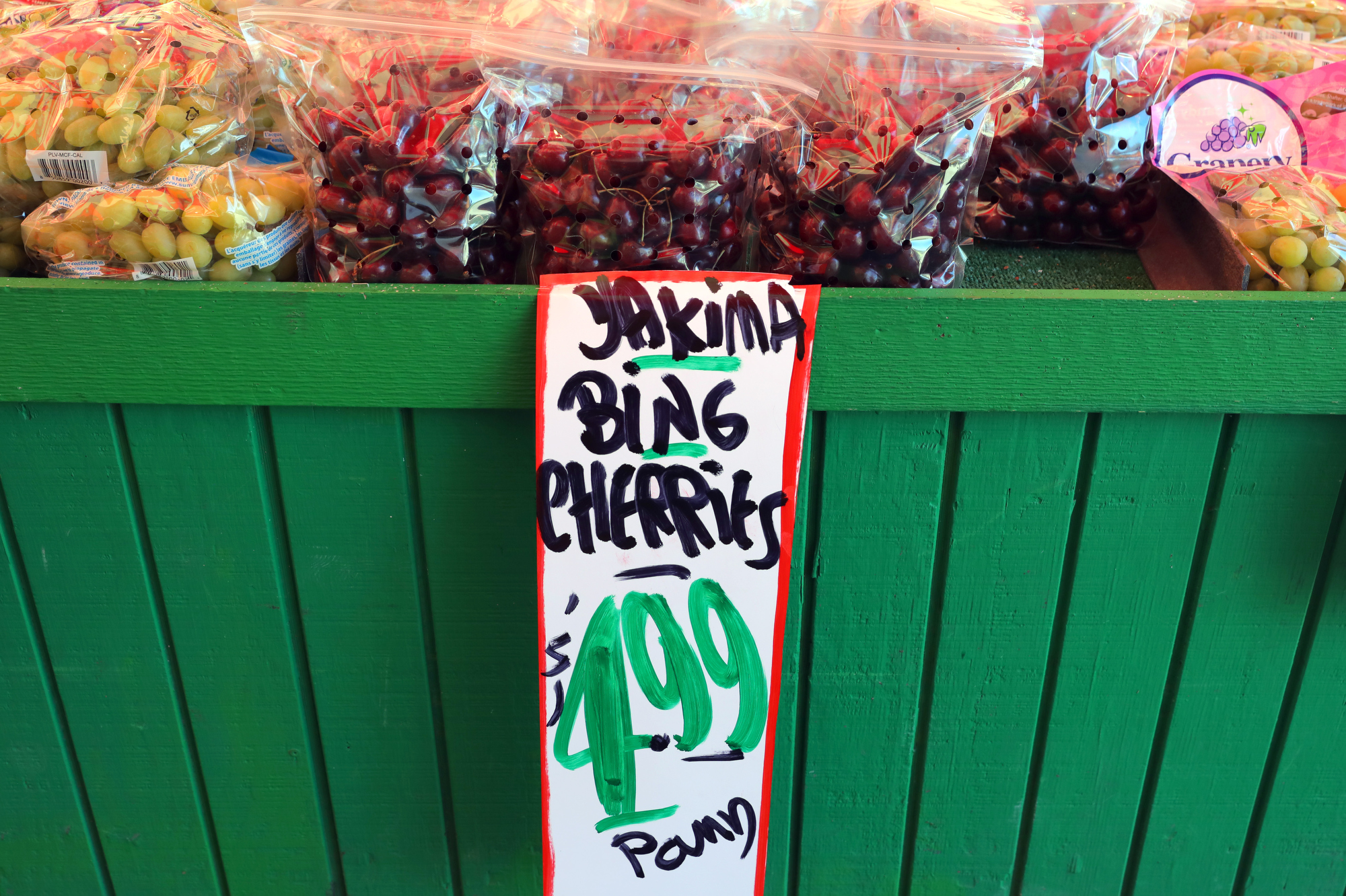 Washington cherry lovers got exactly what they were told to expect this summer: fewer of the sweet treats, at much higher prices. But tree-fruit industry officials say the end of the summer should bring more cherries into grocery stores along with a nice crop of other summer fruit.

Growers in high elevation areas of the state, including the Wenatchee area, are still picking their cherry crop, providing consumers one last opportunity to enjoy the fruit and enough cherries to prevent this from being the smallest in decades.

“There were weeks we had big beautiful displays at stores,” Thurlby said. “There were other weeks those displays were down, and they were in the middle of the produce department.”

As of Aug. 17, Northwest cherry growers had shipped 12.7 million 20-pound boxes, well below the 22.8 million five-year average. As of now, it would be the smallest crop since 2008, when there were just 9.7 million boxes.

However, with nearly 2 million boxes expected to be shipped in August, the figure could go up to almost 15 million, which would keep it from being the smallest crop in decades, but still be in line with several other disappointing harvest years.

Growers are accustomed to pivoting in response to weather conditions.

However, no grower was prepared for the sheer number of weather events that affected the crop in the months leading to the 2022 harvest.

In April, major cherry regions in Eastern Washington, which grow much of the Northwest cherry crop, experienced cold and snowy conditions, hampering pollination. As a result, some cherries were delayed in development, and others weren’t able to develop at all.

In early May, Northwest Cherry Growers estimated that the region would produce 15 million 20-pound boxes.

But those estimates went downward after several rainstorms hit the region in June. Rain can cause cherries to split, making them unsellable in the fresh market — lots of them are processed instead.

Only 3 million boxes of cherries were shipped in June, about half the normal amount.

Typically, a small crop translates to higher prices because demand is higher than supply. However, a higher price per pound may not be enough to cover increasing costs due to inflation and the additional spending required to pick a smaller-volume crop.

DeVaney said that some growers had to be persuaded by fruit shippers to pick more of their crop to maintain a somewhat steady supply to retailers, DeVaney said.

“There were a lot of variabilities and stop and starts,” he said. “That created a lot of uncertainty.” 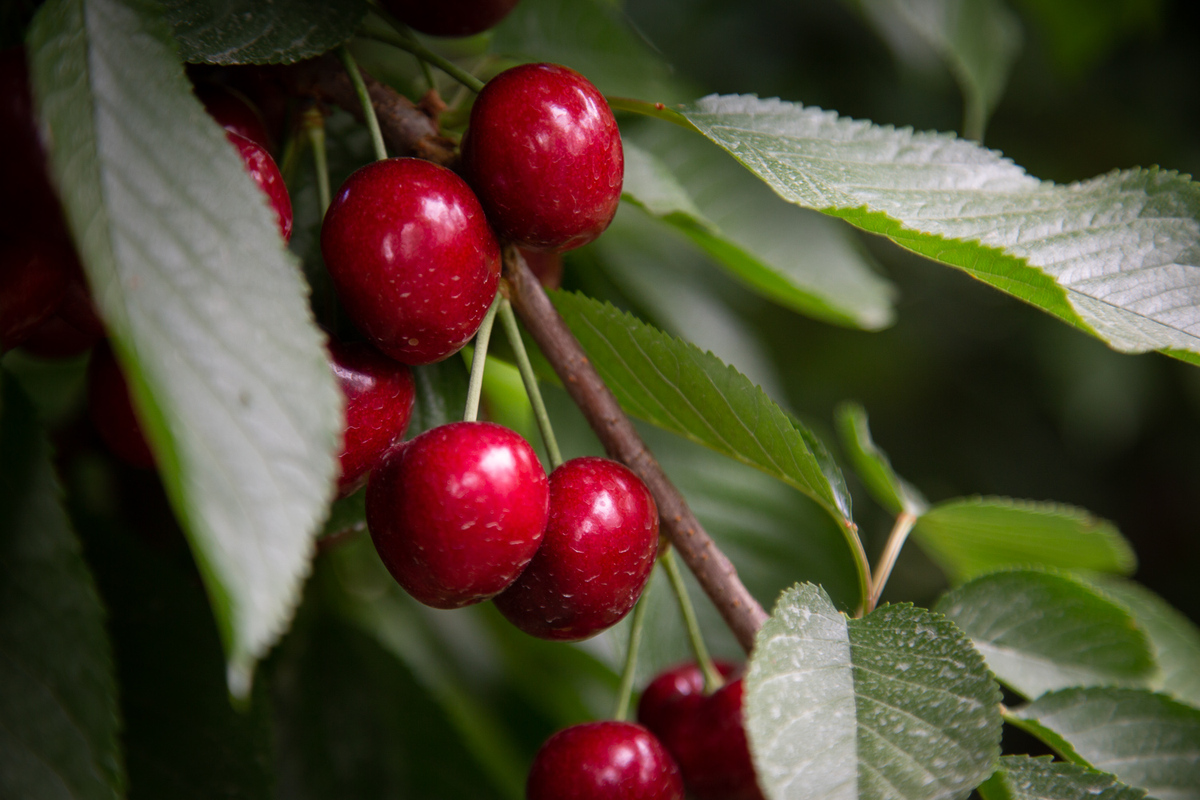 There were some promotions that dropped cherries to as low as $2.49 this summer, but most shoppers paid as much as $4.99 to $5.99 a pound, according to to produce and floral field merchandiser at QFC Ken Bethea. (Jen Dev/Crosscut)

There were some promotions that dropped cherries to as low as $2.49 this summer, but most shoppers paid as much as $4.99 to $5.99 a pound, according to to produce and floral field merchandiser at QFC Ken Bethea.
(Jen Dev/Crosscut)

With fewer cherries on the market, the growers partnered with stores for far fewer retail promotions.

“We just didn’t have the volumes required to build these displays every week,” Thurlby said.

Drawing shoppers for the cherries on the market became a problem on top of the existing challenges, in part because cherries are often an impulse purchase.

While there were some specials, most shoppers also had to pay more than usual.

Ken Bethea, produce and floral field merchandiser at QFC, the grocery chain owned by Kroger, said there were some promotions that dropped cherries to as low as $2.49, but most shoppers paid as much as $4.99 to $5.99 a pound.

And that price was only possible because the grocery chain could buy enough of the crop to get a volume discount that cut the price. Some smaller grocery store chains in Seattle charged upwards of $8.99 to $14.99 a pound for cherries this year, Bethea said.

But Bethea said QFC did not want to price customers out, especially since they were dealing with higher prices on nearly everything.

The trade-off was that the retailer had to accept a smaller profit margin than they would typically get, Bethea said. They would try to make up the loss by raising prices for other products slightly.

“It’s not just about getting your gross dollars; it’s about being a go-to for the [food items] your community is looking for,” he said.

The retailer also found ways to promote cherries when there was less volume. One way was to have one display for various summer fruits, including cherries. With soft fruits from Washington state, including peaches and nectarines coming into their peak, they make an ideal combination, Bethea said.

And cherries kept on arriving. Late-season cherries were not as impacted by the weather as those grown in earlier picking regions, Thurlby said. Grocers and their customers enjoyed a steadier supply of cherries during the final weeks of July into the first weeks of August.

Peaches were also impacted by the weather and diseases as cherries were, but not as dramatically, said Thurlby, who is also president of the Washington State Fruit Commission, which promotes the state’s soft fruits.

Washington state shipped 1 million 20-pound boxes of peaches five years ago. This year, that number will be close to 400,000 boxes.

But that's still enough to supply stores in the U.S. well into the first week of October, and the peak of the harvest should come at the end of August, Thurlby said.

Lessons from a ‘weird season’

DeVaney said growers and others in the industry are more than eager to put the 2022 cherry season behind them.

“The most common refrain [from] growers and packers — this was such a strange and weird year,” he said.

The season served as a harsh reminder of the importance of being as prepared as possible for unpredictable conditions.

While the weather is out of their control, growers can do some things to deal with adverse conditions, namely diversification. That includes producing a variety of products. And with cherries, it means growing different types of early- and late-season cherries and growing them in different areas.

“That’s why a lot of our producers have cherries at different altitudes and in the north and south [counties] of the state — to spread out their production so they’re not exposed to the same weather events at the same time,” DeVaney said.

So more cherries savored by summer fruit lovers rather than remaining damaged on the tree.