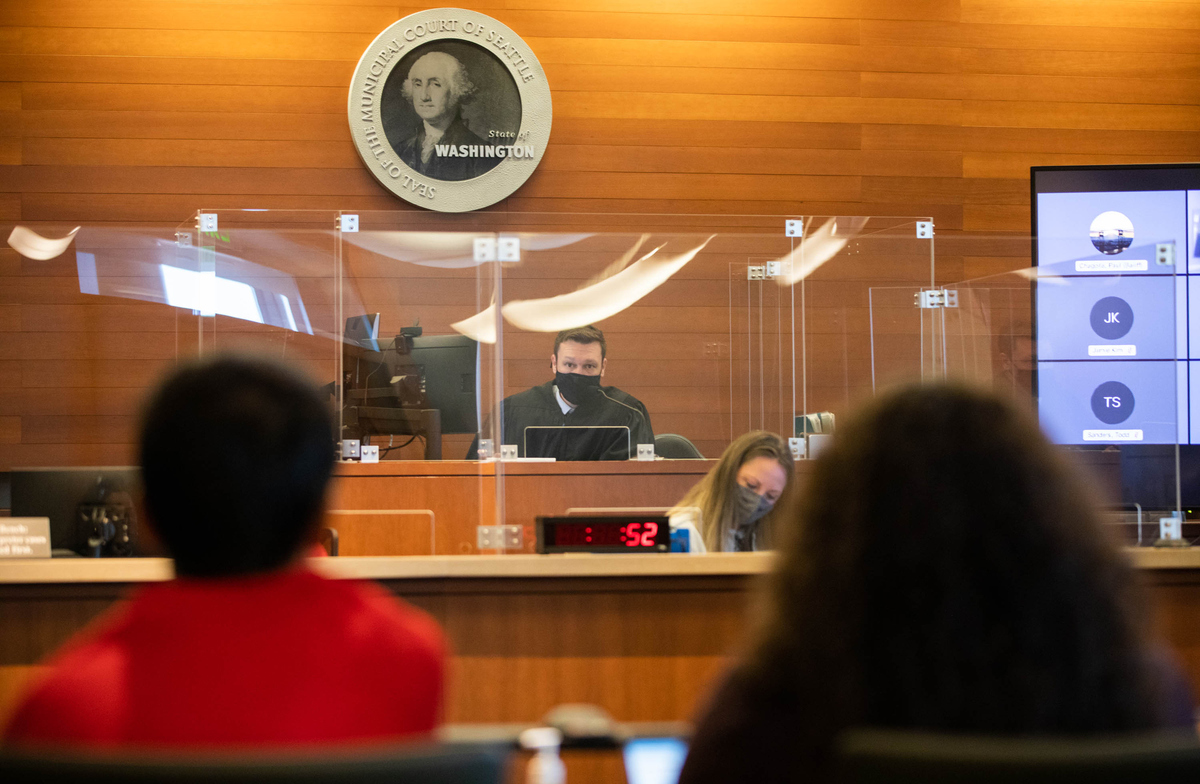 Judge Seth Niesen responds to a defendant participating in Seattle Community Court at Municipal Court of Seattle on Monday, August 29, 2022. Seattle and King County started a community court in August 2020 in an attempt to break the cycle of poverty and crime for low-level offenders by connecting them to services and providing alternative sentencing. The number of community court referrals have increased in 2022. (Amanda Snyder/Crosscut)

Seattle City Attorney Ann Davison was elected last November with a tough-on-crime promise to aggressively prosecute criminal cases. So why have referrals to Seattle Community Court — which connects people to social services rather than put them in jail — more than doubled since Davison took office in January?

It turns out that the rise in community court cases is not an unexpected softer side of the city attorney, but in fact a result of Davison doing what she promised: prosecuting more cases than her predecessor.

Seattle Community Court is open to people arrested for low-level misdemeanors such as shoplifting, trespassing, disorderly bus conduct, car prowling and more. If a case is eligible for community court, it is automatically sent there, although defendants can opt into traditional court if they want. The exception is for repeat offenders, which the city attorney can now choose to prosecute.

Because the city attorney deals only with misdemeanors – higher level crimes are the county prosecutor’s purview – an increase in overall case filings can easily lead to more community court cases.

The city attorney office’s criminal division recently released its second quarter data report. It shows there were 450 referrals to community court in Q2 of this year. Q1 had 300 community court referrals. Seattle Community Court was created in August 2020 and the previous high mark for referrals was just over 200 in Q2 2021.

The doubling of community court referrals coincides with a sharp increase in all case filings from the city attorney compared to the past few years. The office filed 1,708 cases in Q2 of this year, 26% more than Q1 of 2022 and 124% more than Q2 2021.

The number of cases the city attorney has declined has decreased as well. The office can choose to not prosecute a case referred to them by the police for a number of reasons including not being confident about proving the crime beyond reasonable doubt, lack of cooperation from the victim, technical issues and more.

Natalie Walton-Anderson, the city’s criminal division chief, said the increase in cases is due in large part to the office’s much faster response time to new cases. The median time for a filing decision is now three days, down from 124 days under the previous city attorney. Faster filings mean more cases are moving through the system.

So far, Seattle community court is handling the increased load, said Judge Damon Shadid, the Seattle Municipal Court judge who leads the community court program, but the extra cases are having an impact.

“It’s been a challenge,” said Shadid. “You have to understand that our calendar space did not increase when the city attorney’s office started filing more cases. The court has not received increased funding to make up for increased filings.” 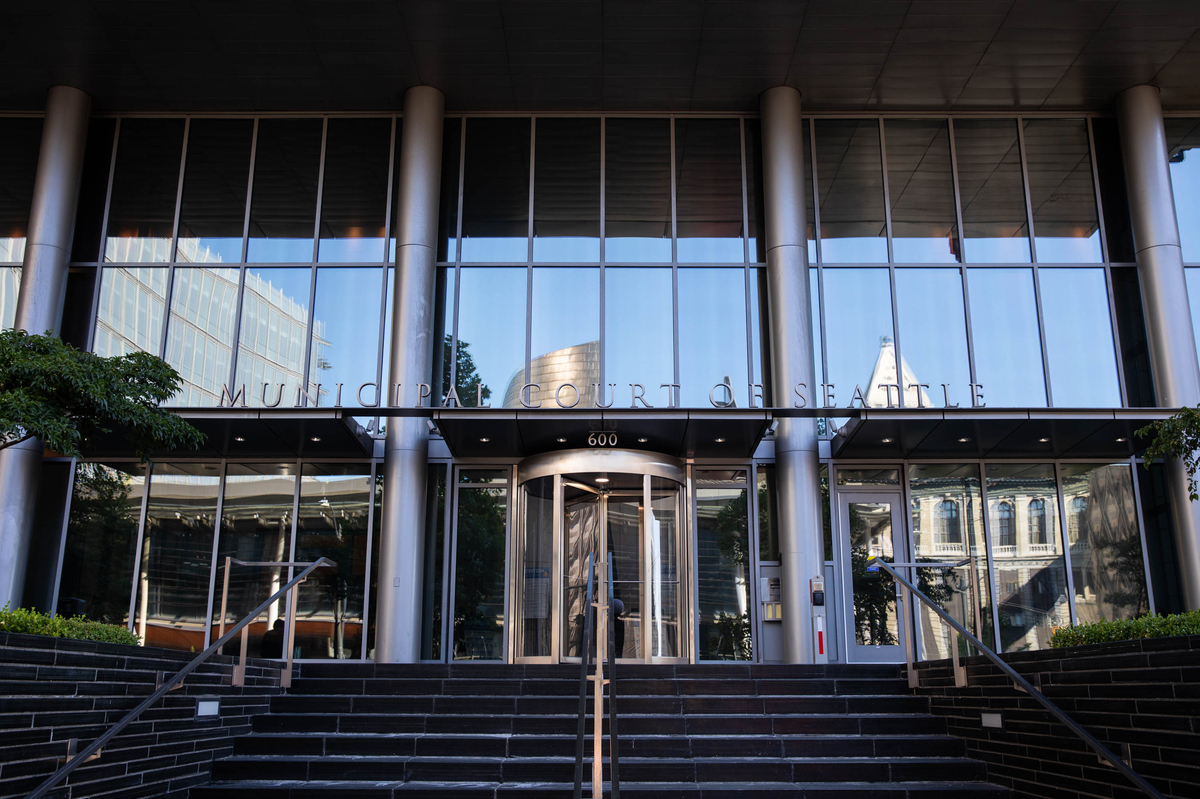 Shadid helped create Seattle’s community court in partnership with the King County Department of Public Defense and the Seattle City Attorney’s office. The aim of the court is to try to break the cycle of poverty and crime by connecting people with housing, substance use counseling, health care, employment opportunities and more, rather than putting them in jail.

In addition to working with case managers, community court participants can be required to perform community service and pay restitution. “It is holding people accountable; we’re just taking a different tact in how to help people exit the criminal legal system,” said Shadid.

Seattle’s community court is one of several to open in recent years in King County.

“If we had a more adequate social safety net, then most of these crimes wouldn’t be committed in the first place,” said Shadid.

Although filings are up, the judge said the faster filing time is helpful because it connects people to services sooner after their alleged crime and increases the likelihood they actually show up for court. “That is definitely the biggest challenge with court in general and community court specifically: It’s hard to get people into court for that first hearing,” Shadid explained.

Though court reformers see community court as a more humane alternative to booking people into jail, they don’t necessarily see the increase in community court referrals as positive. Instead, many want to see more cases diverted into alternatives that provide social services and support before they enter the court system. According to city attorney office data, pre-filing diversions and pre-trial diversions are both down significantly compared to years before the pandemic and prior to the creation of Seattle Community Court.

Lisa Daugaard is co-executive director of the Public Defender Association, a nonprofit focused on reforming the criminal legal system (not to be confused with King County’s Department of Public Defense, which provides legal representation to defendants). The Public Defender Association helped create one such pre-filing alternative called LEAD or Law Enforcement Assisted Diversion. LEAD similarly connects people to case managers who assist with drug treatment, health care, housing and more. But LEAD allows police officers to connect someone they arrest or come in contact with on the street to case management without referring the case to the city attorney’s office first.

“All other things being equal, community-based care is more successful than court-based care for most people,” said Daugaard. “It’s less traumatizing and a lot of behaviors involved in cases in community court are related to the aftermath of traumatic life experience. … We don’t want to push people further into a stigmatizing and expensive system than necessary to make that help available.”

“While community court is a much less harmful version of the criminal legal system … ultimately the criminal legal system is not going to resolve the challenges people are facing. They’re there because they lack housing, they lack food, their basic needs are not being met,” said Anita Khandelwal, director of the county’s Department of Public Defense.

Both Khandelwal and Daugaard expressed concern about the overall increase in filings from the Seattle city attorney coming at a time when the downtown Seattle jail is under scrutiny for being overcrowded, understaffed and suffering from a rate of suicides exceeding the national average. The Seattle Times recently reported that because of understaffing, in-person visitation is largely suspended, programming is reduced and people must stay in their cells for 23 hours a day. Department of Public Defense attorneys say it is difficult to get in to meet with their clients.

“Being in a jail facility is never good,” said Daugaard. “But [current conditions in the jail] are at a different order of magnitude so people should be bending over backwards to keep people out of there and it seems to be trending in a different way.”

Despite their disagreements on approach, Khandelwal said she thinks she and the city attorney have a shared goal.

“We all want a safer city. An expensive, racially disproportionate system that ultimately doesn’t address people’s needs is not going to get us there,” said Khandelwal. “There are those who look to the criminal legal system as a means of solving our problems, solving homelessness. But we know that’s not going to happen. The path there is housing and services.”