In Seattle's overpriced housing market, some opt to rent indefinitely 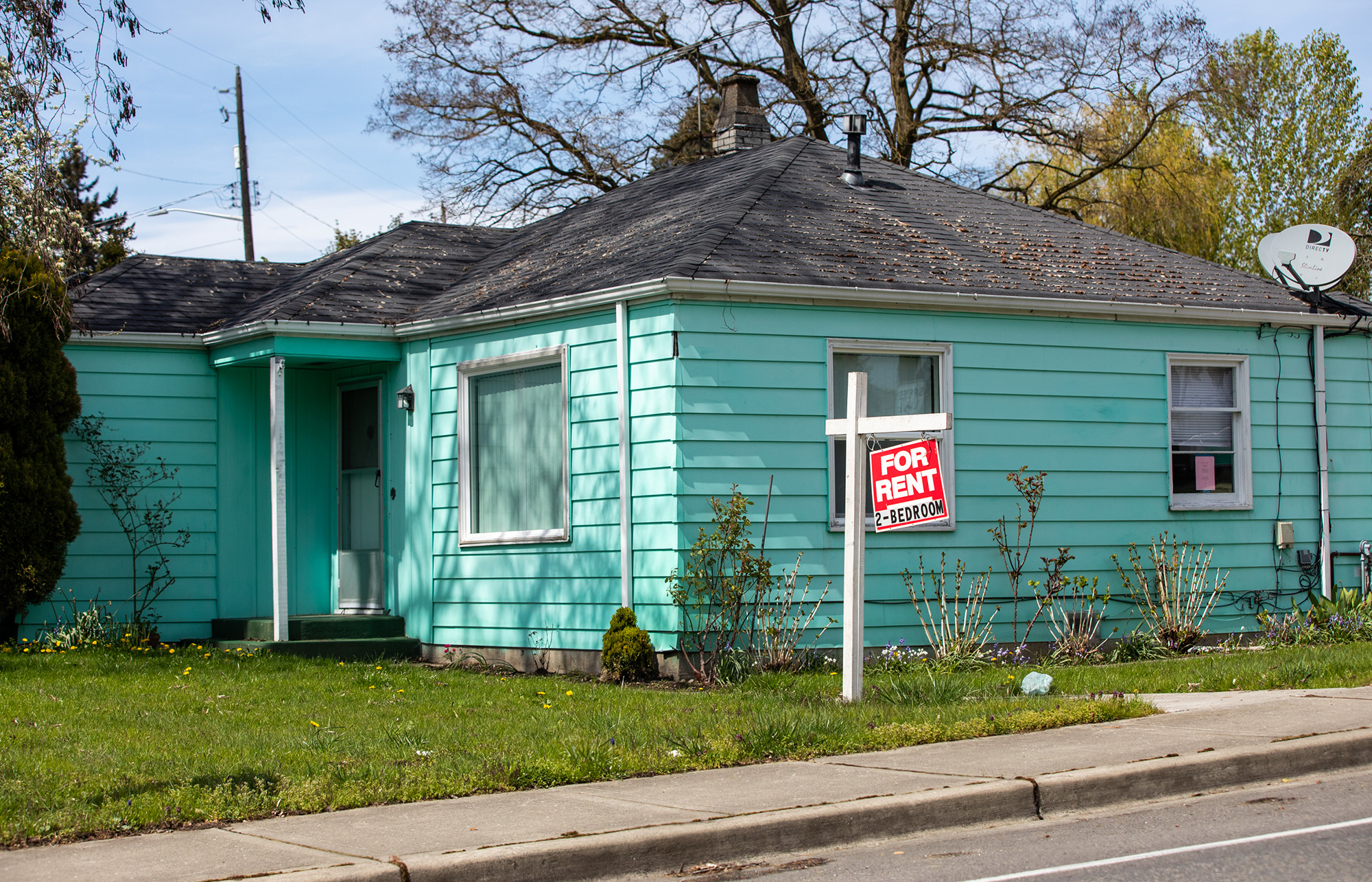 A home for rent in the Bryn Mawr-Skyway neighboorhood near Skyway Park on Thursday, April 21, 2022. For some Seattle renters, home prices, location, and other factors make renting more appealing even if they could probably afford to buy. (Amanda Snyder/Crosscut)

Homeownership is the American Dream. Nearly three-quarters of Americans see it as the highest mark of prosperity in their lives. Ownership provides autonomy. A long-term fixed monthly mortgage provides stability that renting likely won’t. And it builds equity and wealth. But at what point does the dream become impractically expensive?

The median rent for a one-bedroom in Seattle is $1,720. A median two-bedroom is $2,080. But those figures pale in comparison with the mortgage payments for a median-priced, $860,000 home in Seattle. To afford that, a buyer would likely owe more than $5,500 each month.

For some Seattle renters, the math just doesn’t add up anymore. Despite the advantages of homeownership, the financial leap can seem illogical, even if they likely could pull the money together to buy.

Arlen Proctor loves living on First Hill. He appreciates that he can walk most places, that the streets are bustling with a diverse cross-section of Seattleites, that he has easy access to the food and music scene and community of Capitol Hill.

Proctor loves it so much that he and his partner, Jennifer, have lived there for 12 years, in the same apartment. It’s no coincidence that Arlen and Jennifer’s stability has coincided with the rare good fortune of having a landlord who has barely raised the rent while they’ve lived there. He recognizes that’s a particularly lucky “roll of the dice” in a city where rents have risen dramatically over the past decade and people are often left in the lurch by multi-hundred-dollar-a-month rent increases.

Proctor and his partner keep their eye on Redfin and Zillow and could likely afford to buy a house if they moved to the far edges of the city or into the suburbs. But paying significantly more each month to live in a suburban neighborhood holds little appeal.

“For me the idea of moving to a single-family residential neighborhood surrounded by other houses is the exact opposite of diverse living,” said Proctor. “You have to go pretty far to buy a house for $700,000-$800,000. It’s just a number on some level, but it’s a strange sort of mental hoop to jump through to convince yourself it’s worth it.”

Similarly, they could probably find a condo, but the tradeoff would likely be a smaller home with a higher monthly payment. The median condo sale price in Seattle is about $505,000 right now, according to Redfin.

Ultimately, Proctor said, the motivation to move would likely come from factors beyond their control, like their landlord having a change of heart about rents or selling the building to someone who dramatically increases their rent.

For Karan Goel, the cost of homebuying mixed with a sense of uncertainty keeps him from making the leap from renting to homeownership.

As a software engineer, he could make a mortgage work, but he doesn’t think it makes sense to lock himself into a $5,000-a-month payment. “That’s a lot of rent. You can rent a decent house or big apartment for quite a bit less than that right now,” he said.

“With climate change, I’m not sure how much I want to be locked into a single place,” said Goel. “What happens by the end of the decade with wildfire smoke or extreme heat or flooding?”

Goel is also unsure about his ability to stay in the U.S. long-term. He is an Indian immigrant who has lived in Seattle for 10 years on a work visa. But he said the path to permanent residency or citizenship is challenging, which also makes a long-term housing commitment questionable.

Renting isn’t all tradeoffs, however. Goel appreciates the flexibility it provides. When the pandemic began, he and his partner were renting a “very small” condo downtown. When the lease was up, they were able to move to a much larger place on the border between the University District and Ravenna.

Of course there are downsides to renting, even for people who believe in its value. Marci Taitt-Lamar was born and raised in Seattle. A few years ago she was a member of the city’s volunteer Renters’ Commission, which provides policy recommendations and advice to city leaders and departments on how to improve conditions for renters.

Taitt-Lamar’s time on the Renters' Commission coincided with the end of her time as a renter in 2020. After a decade of steady rent increases, she decided that it was worth the investment to buy a home and experience the stability of a fixed mortgage.

When she moved into her first Seattle studio apartment in 2013, her rent was $1,200. By the time she left her last studio apartment, the landlord was trying to raise her rent from $1,800 to $2,200. The mortgage payments for her south Seattle home are about $2,500 a month, but she reasoned that owning is an investment that will pay her back eventually.

“The only reason I considered homeownership is because I was incredibly destabilized by ludicrous rent increases,” Taitt-Lamar said. “I happened to be in a good position at my job, making good money for a nonprofit. Not tech money, but enough that I had a little bit of savings.”

During her time on the Renters' Commission, Taitt-Lamar and her fellow commissioners often discussed policy meant to help renters in Seattle’s expensive, unstable market. She recognizes that many if not most renters do not have the option to become homeowners, nor are they renting by choice. But she still wants to see the city do more to provide them with some of the same sense of stability experienced by those who can afford to buy.

The Seattle City Council has taken a few steps in recent years to bolster renter rights in the name of housing stability, several of which were spearheaded by Councilmember Kshama Sawant. The new laws include a ban on evictions during the school year for renters with children, a ban on evictions during winter months, a right to legal representation during eviction proceedings and a requirement that landlords give at least a six-month notice for rent increases.

Councilmember Tammy Morales has also taken up the issue of renter stability with her Tenant’s Bill of Rights, a collection of policies she’s hoping to implement through the City Council. The council passed two pieces of her bill of rights last year: a right for tenants to renew their lease unless the landlord has just cause to end it, and increased eviction protection for renters who accrued rental debt during the COVID emergency.

“We need to make sure that regardless of whether you’re choosing to rent or have no choice that you are ensured the same protection and stability of those who are able to afford to buy a home,” said Morales.

Looking ahead, Morales said she’s working with Councilmember Teresa Mosqueda on legislation that would give tenants the right of first refusal to purchase their building if it was for sale. In some cases, tenants are able to pull together the money or work with a nonprofit to become owners.

“My office is trying to understand how we can build more community assets,” said Morales. “It’s an important way to stop the displacement that’s happening. And, particularly in Black and brown communities, to build wealth for those folks who’ve been left out of these markets.”

Morales supports the idea of rent control, but because the Washington Legislature banned rent control in 1981, she said it’s an issue that must be taken up at the state level, not in City Council.

Calvin Jones is a renter, a former member of the Seattle Renters Commission and a housing advocate with the group Tech4Housing. He supports the tenant-rights work the council is doing and wants to see an increase in subsidies to help offset low-income renters’ monthly costs. But he also thinks that increasing the supply of housing by changing zoning to allow more density will help give renters more power.

“The more scarce housing is, the more power landlords have over tenants,” said Jones. “When there’s nowhere else to move, landlords can charge higher rents. And they can keep their housing substandard in ways they might not if tenants had more options to say ‘I’m just going to move somewhere else if you don’t fix this.’”

Update: This article has updated with newer data on median Seattle rents from Apartment List.