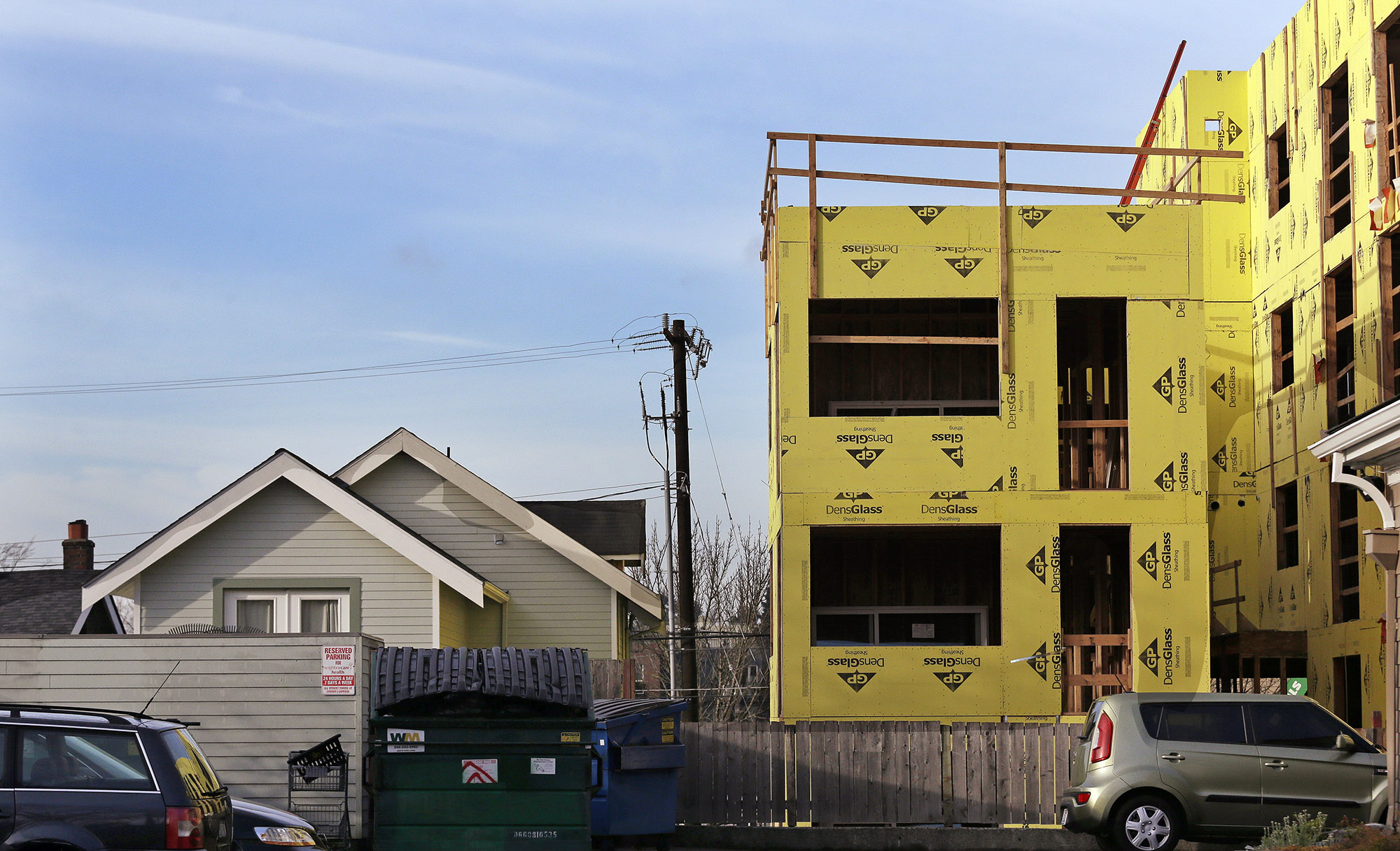 However you slice it, Seattle homebuying is wildly expensive. The median sale price for all homes is $840,000, according to Redfin. If you look only at stand-alone single-family homes, the median is $975,000. The median condo is selling for over $500,000.

Thanks to higher interest rates and economic uncertainty, those prices actually show a bit of a cooldown from the peak madness of pandemic buying this past spring, when bidding wars ended with all-cash offers for 20% over asking price and the median single-family Seattle home was selling for around $1.1 million.

But a cooldown hasn’t made the market cold. Median home prices have still risen 84% over the past 10 years, according to Zillow.

Supply and demand isn’t the only factor in Seattle’s housing costs — 50-year-old bungalows wouldn’t be selling for $850,000 if there weren’t high wage earners here to buy them. But construction has lagged behind population growth.

What would happen if supply did meet demand? Would we start to see home prices fall? Or is the Seattle market’s only hope for a return to earth an economic shock like the 1969 Boeing bust, or the 1980s recession, or the 2008 housing crisis that brought down prices here in the past?

Crosscut asked housing economists and researchers what the future could hold if — and that’s a big if, many say — Seattle built drastically more housing.

The short answer: Seattle is extremely unlikely to build its way to significantly lower home prices. More, and therefore denser, home construction could help ease prices. But not increasing home construction all but guarantees prices will keep climbing.

To really see a sharp decline, Seattle would likely need an economic shock, such as a recession, the collapse of an industry or some other unforeseen factor that sends people away from the city in droves. That path to affordability would surely have an outsized negative impact on the lower- and middle-income residents already most hurt by Seattle’s expensive housing.

“You very rarely get home price declines without some sort of economic recession,” said Laurie Goodman, founder of Urban Institute’s Housing Finance Policy Center. “Seattle’s supply issue is very, very acute. … And while there’s some emphasis on increased building, there’s also a large amount of in-migration. It’s hard for construction to keep up with a fast-growing city.” 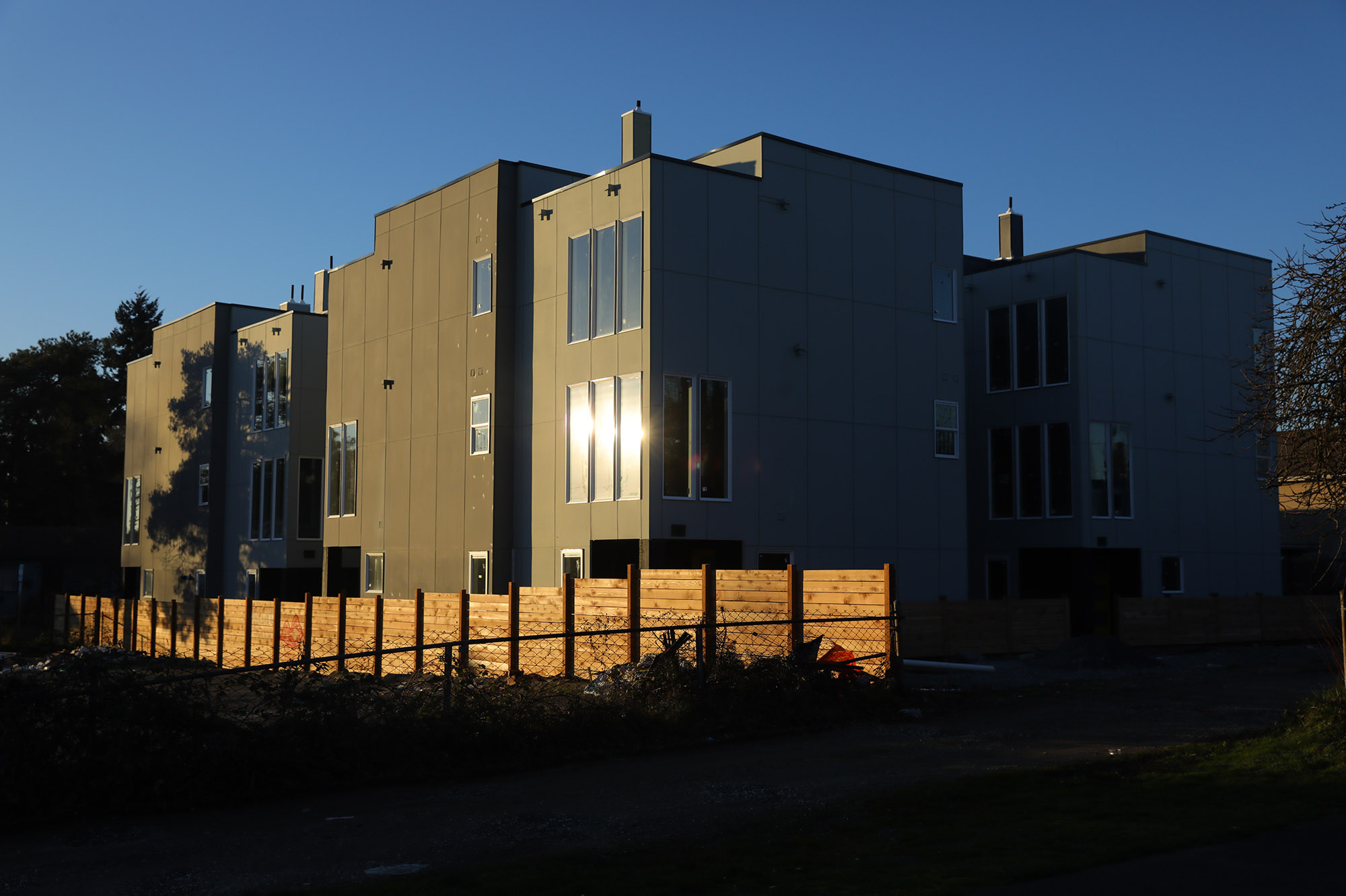 A new group of quadplexes is in the finishing stages of construction off SW Roxbury Avenue in White Center, January 27, 2022. (Genna Martin/Crosscut)

A new group of quadplexes is in the finishing stages of construction off SW Roxbury Avenue in White Center, January 27, 2022. (Genna Martin/Crosscut)

Arthur Acolin, an assistant professor at the University of Washington’s real estate school, has some optimism about the theoretical impact a sufficient supply could have on home prices. But in practice he expects an increased supply to mostly help flatten price growth in Seattle.

Though flattened home prices don’t do much in the short term to help people priced out of homeownership, Acolin argued they could even out the imbalance between home prices and wages, where you might get an annual 2%-3% growth in home prices, rather than the current 7%-10% (or higher).

“Prices would increase with income, which is what you would expect in a functioning market,” he said. “There is a lot of fear that new construction in your immediate surroundings will destroy home value. There’s very little empirical evidence that that’s the case. But there is some evidence it would moderate the prices.”

Moderated prices could, in turn, help more people earning at or just below the region’s median income afford homeownership, whether in the city or just outside of it.

“For those earning above 80% area median income, the market should be able to deliver adequately priced housing options in the broader region,” said Acolin. “Then for households earning less than that, there’s no kind of solution that doesn’t require a substantial amount of public resources.”

Although economists are skeptical home construction alone can ameliorate the effects of Seattle’s decade-long boom, they broadly agree that not building more will make things worse.

“Seattle is at the top of the list of desirable cities for affluent people, so I think it’s going to continue to attract a lot of migration from wealthy people and high earners,” said Redfin chief economist Daryl Fairweather. “I think Seattle’s in store for a continued rise. But that makes it even more urgent to build as much housing as possible so that the rise isn’t as severe as it might otherwise be. If Seattle were to just maintain the status quo for housing supply, they’ll end up where San Francisco is.”

With a fixed supply of land on which to build, the economists say the only way to increase the supply of housing is to build more densely. “If you can build six or 10 units on the same parcel [of land] where right now you can build only one unit, that same price of land is divided by six-10,” said Acolin. “Just allowing the building of quadplexes, or six-unit buildings, on any 5,000-square-foot lot in Seattle would divide that input cost.”

Acolin points to his home country of France as an example. In Dijon, the city is building mixed-income, mixed-home-size developments meant to serve a variety of household types. One development he shared is built in a formerly industrial area. There are small townhomes along with condo developments, rental apartments, and quadplexes with commercial shops and office space mixed in.

Fairweather said cities can also increase the speed of construction by streamlining permitting processes and taking other steps to ease bureaucratic barriers.

In Seattle, however, the idea of denser construction in residential neighborhoods remains a hot-button issue. Every attempt to do so has met strong opposition from neighborhood councils and other homeowner groups.

Acolin takes a conciliatory view of change. “Everyone who aspires to own a single-family home and can afford it should be able to buy that as well, he said. “But we need options for people who can’t afford that or do not aspire to that.”