With the Mariners in the playoffs, Seattle nonprofits win too

Local organizations with connections to the team are getting a fundraising boost from their postseason run. 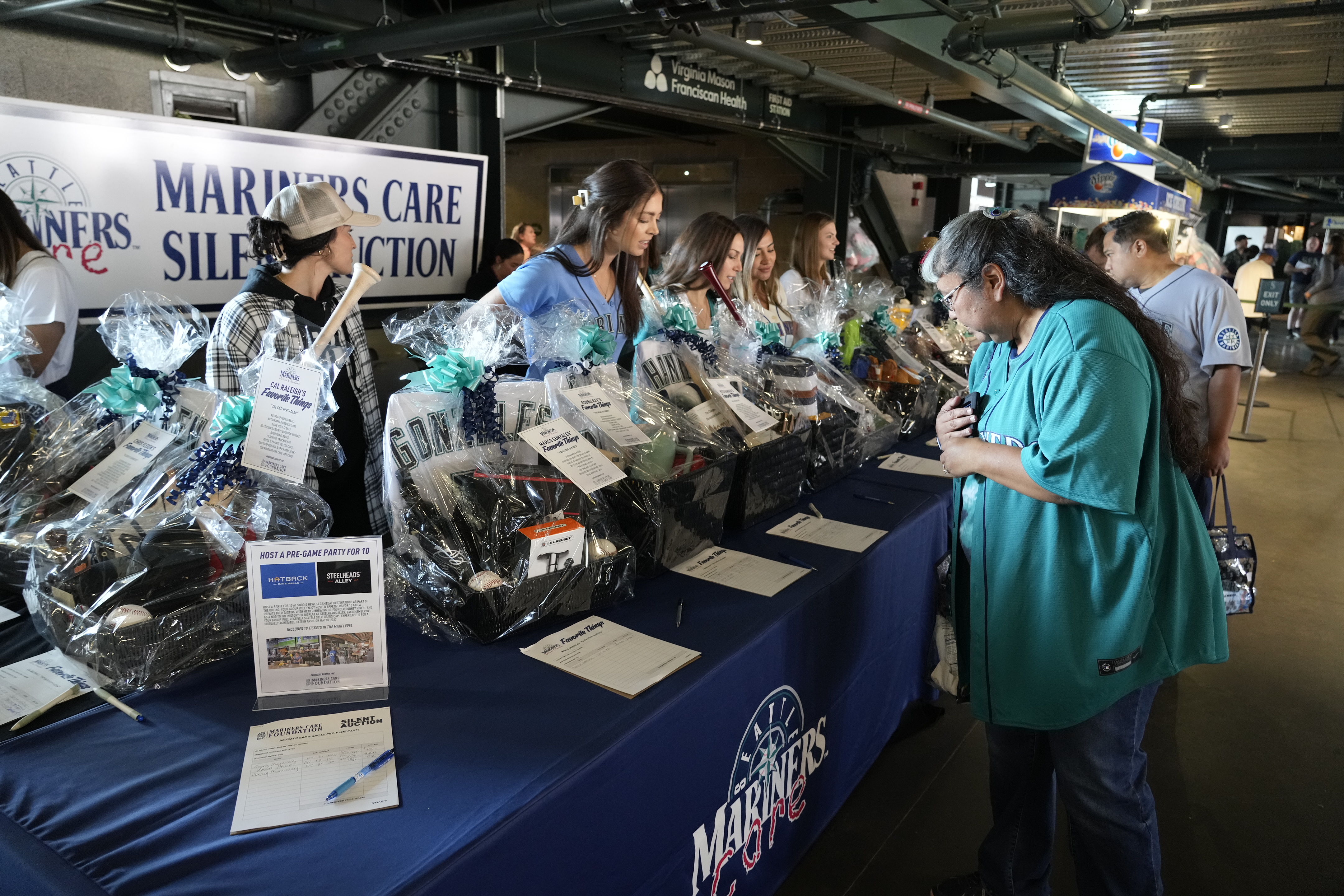 Fans look at silent-auction baskets at the Mariners Care Foundation auction on Oct. 2, which raised $38,435, its highest total ever, according to the Mariners. (Photo courtesy of the Mariners)

Successful sports teams bring money into their hometowns, but not just for T-shirts, beer and ball caps. Seattle nonprofits say they too are getting a windfall from the Mariners’ winning season.

The Sunday after the Mariners clinched a spot in the playoffs, fans gathered in T-Mobile Park both to show their love for the team in a game against the Oakland Athletics and to support the team’s philanthropic efforts through the Mariners Wives Favorite Things Basket Auction. Each basket contained a jersey, signed memorabilia and a personalized collection of one of a Mariner’s favorite things.

The silent auction, which returned to T-Mobile Park for the first time since 2019, happened at the perfect time for Mariners excitement to translate into charitable support. After entering the postseason on Cal Raleigh’s home run, fans came looking for his basket and that of team manager Scott Servais. Excitement for the postseason brought the auction its highest total ever, $38,435, according to The Mariners Care Foundation Twitter. That’s up from $24,412 raised at the 2019 auction.

That money goes to Mariners Care, the team’s nonprofit foundation, to support programs like On Base, the Mariners’ effort to make baseball and softball more accessible for youth. As is common among sports teams, the Mariners support thousands of nonprofits each year with donations of promotional items, tickets and autographed memorabilia to fundraising events. Nonprofits can request items online at the Mariners Care website. They can also request a visit from the Mariner Moose.

The Favorite Things auction is one example of a larger trend local nonprofits are seeing this season. Excitement surrounding a great season translates into new energy, engagement and visibility for the Mariners’ charity work and its longstanding philanthropic partners.

“The idea that what happens on the field can bring attention to what we’re doing is really exciting,” said Nova Newcomer, director of community relations and the Mariners Care Foundation. She describes the team’s three-pillar community work as making baseball and softball more accessible, equity and social justice, and ensuring hometown vibrancy. 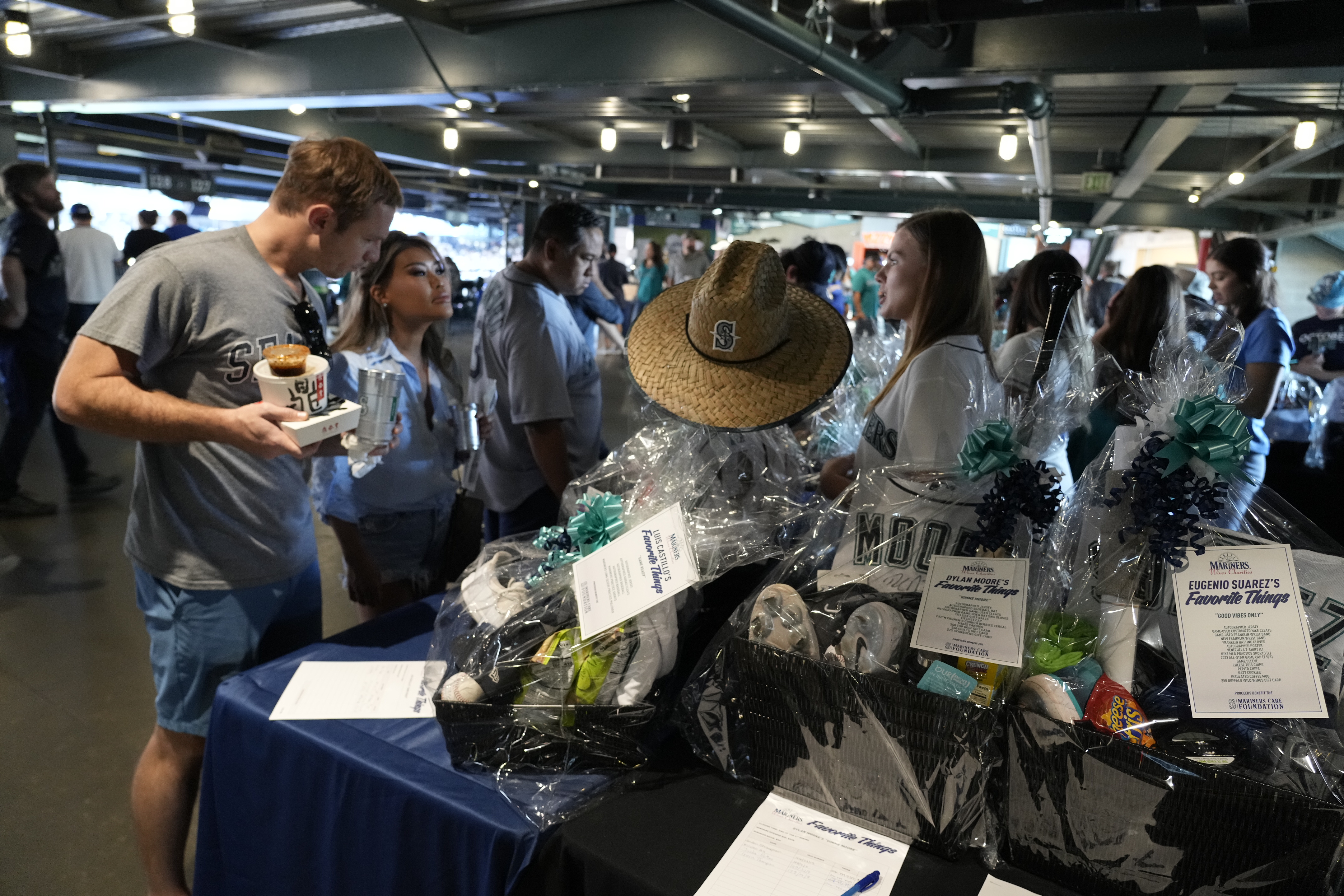 Fans look at baskets at the Mariners Wives Favorite Things Basket Auction at T-Mobile Park on Oct. 2. (Photo courtesy of the Mariners)

Fans look at baskets at the Mariners Wives Favorite Things Basket Auction at T-Mobile Park on Oct. 2. (Photo courtesy of the Mariners)

The team has a 16-year partnership, for example, with the Page Ahead Children’s Literacy Program. A recent addition to that effort is RBIs for Literacy: For every run batted in, truck manufacturer PACCAR donates money to Page Ahead.

“They’re always putting us up in the outfield,” said Page Ahead executive director Susan Dibble. With people extra-excited to go to the stadium this year, both because pandemic restrictions were lifted and to follow a remarkable season, Page Ahead has seen its visibility grow.

The Monday after the Favorite Things auction, Page Ahead was presented with their season check for $75,000 at T-Mobile Park during a game against the Detroit Tigers. Afterward, the organization got a lot of calls. Dibble said it is “unprecedented how many people say ‘We know Page Ahead’” now. That attention could also lead to more engagement with Page Ahead programs like book drives. 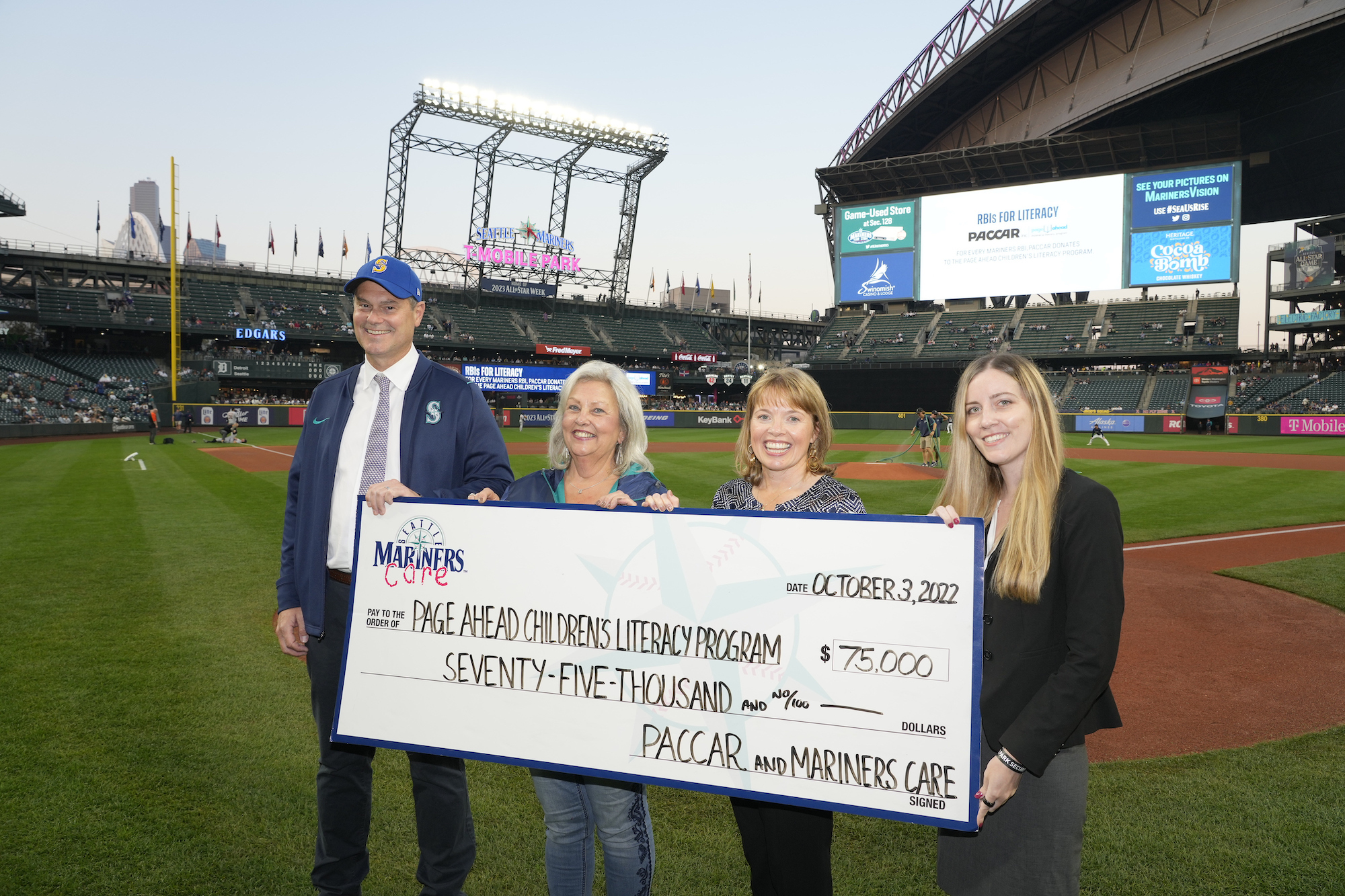 A PACCAR representative and Page Ahead Literacy Program staff hold a $75,000 check from the RBIs for Literacy program at T-Mobile Park on Oct. 3. (Photo courtesy The Mariners)

A PACCAR representative and Page Ahead Literacy Program staff hold a $75,000 check from the RBIs for Literacy program at T-Mobile Park on Oct. 3. (Photo courtesy The Mariners)

Jayme Hommer, chief development officer for the Clubs, said there has been an uptick in in-kind ticket donations to the organization from donors who feel that “this is a special season and we want kids to be a part of it.”

And Club kids feel the excitement too, often asking “Do we get to play [baseball and softball] in our active time?” and being extra-excited to see when the Mariner Moose comes to visit because he represents a team that is doing really well, Hommer said.

The Mariners also have a close connection with United Way of King County, which remained as strong this year, according to Jared Erlandson, senior director of communications.

“It would be hard to do more than they are already doing” for United Way, said Erlandson. His example was Home Base, an eviction-prevention program the Mariners helped launch in 2019. Erlandson cited Mariner leadership as critical to Home Base having the infrastructure to get and distribute millions in federal relief dollars.

To him, the Mariners are already a “shining example of what a pro sports team should do for a region.”

Newcomer said she expected the postseason would bring a little boost to Mariners Care, but “I don’t think I expected what happened this season.” For one thing, a portion of ticket sales from the recent watch parties at T-Mobile Park went to Mariners Care.

She further expects the boost to stretch into the holiday season and even into next year. To her, part of the unique voice of baseball is that “we can inspire and advance our work in the community.” 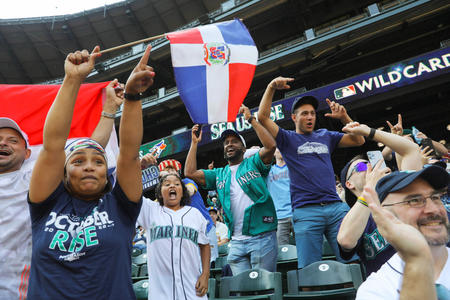 A casual fan’s guide to the Mariners’ playoff run

Seattle has advanced to take on the Houston Astros in the ALDS. If you're a baseball rookie, here's all you need to know.

A casual fan’s guide to the Mariners’ playoff run

Seattle has advanced to take on the Houston Astros in the ALDS. If you're a baseball rookie, here's all you need to know.