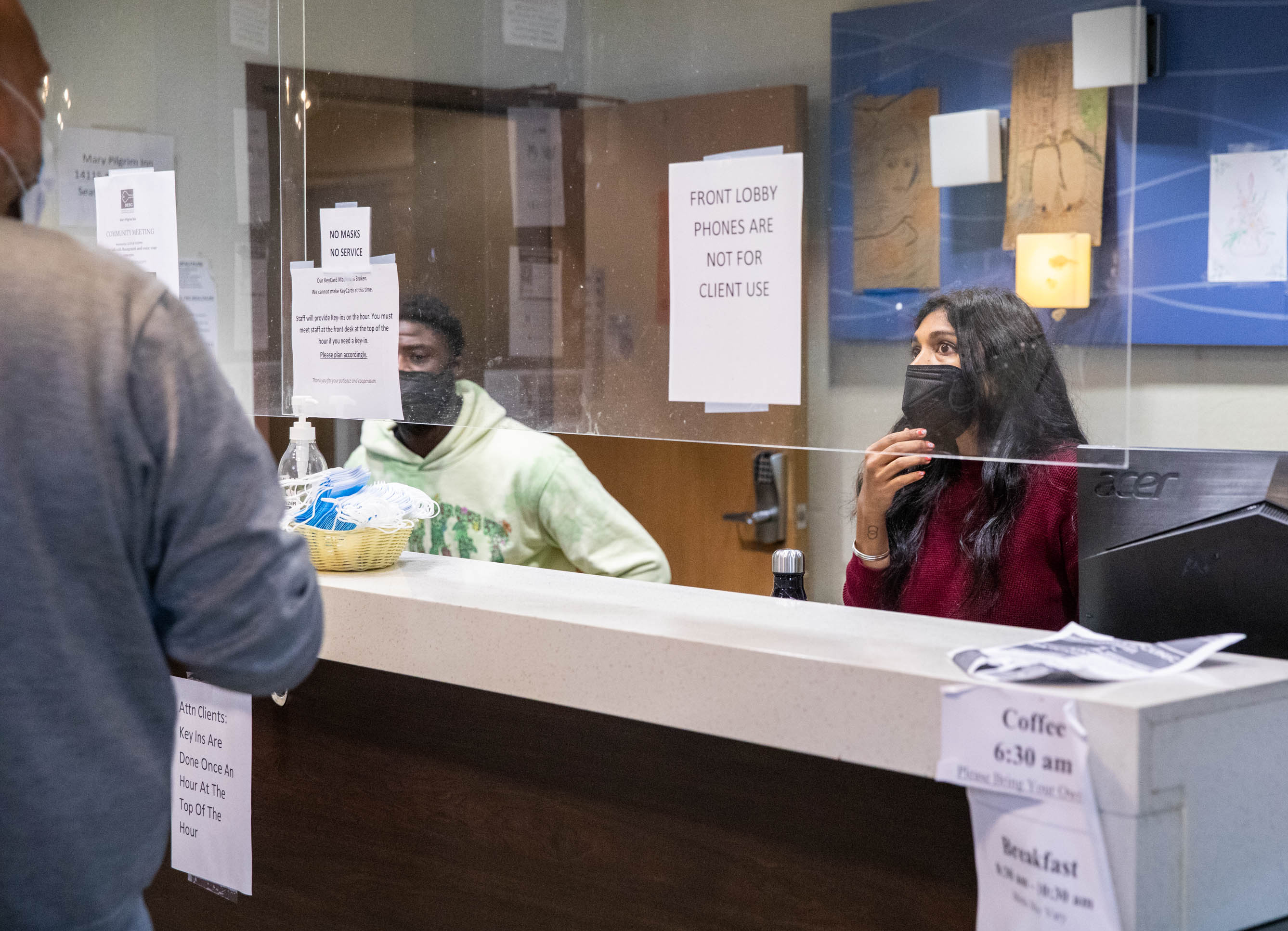 Ashleigh Desvigne’s work has never been easy. She’s the lead family advocate with YWCA's Project Reunite, a program that provides supportive housing and classes for parents experiencing homelessness and drug addiction in order to get them stabilized and reunited with their children.

But the pandemic has made things so much harder. At its height, she and her colleagues couldn’t meet in person with their clients. It was more challenging to spot when people were regressing in the program. The isolation has escalated people’s mental health struggles. Desvigne said she has seen vastly more clients relapsing into drug use than she did in the past.

“In the 10 years I’ve been doing this, this has been the most challenging it’s ever been,” she said. “It got to a point that I can honestly tell you I wanted to walk away.”

Many of her colleagues did walk away, citing the compounding stresses of increasingly challenging, often traumatic work done for low pay. After five and a half years with YWCA Seattle King Snohomish and 10 years in the homeless-services industry, Desvigne earns $25.50 an hour, or about $53,000 annually before taxes.

All those factors make it difficult to attract and retain new hires to replace her departed colleagues. Desvigne said she’s supposed to have a counterpart doing the same job. The last four people they’ve hired for the position have lasted only six or seven months.

“I’ve told all of them, ‘I totally get it; I totally understand,’” she said.

The homeless-services sector struggled with low pay, burnout and turnover long before the pandemic. But industry leaders say the pandemic cranked the challenges of the work to 11, leading to a crisis-level shortage of frontline workers.

In recognition of that crisis and the need to stanch the outflow of social-service providers, the Washington state Legislature earmarked $55 million in federal COVID-19 grants in the 2022 budget to pay for two rounds of $2,000 stipends for people doing direct homeless assistance in the state. The money also pays for a study that will look at long-term solutions to stabilize the industry. Applications for the stipend program opened Sept. 29.

“The stipends were never seen as a systemic solution,” said Michele Thomas, advocacy director at the Washington Low Income Housing Alliance. “It was meant to be a generous Band-Aid to stop the bleeding. And to say to the frontline workers that the state sees them and that the state is committed to improving working conditions for them.”

The stipends are available to anybody employed full- or part-time with an organization that works on-site with people experiencing homelessness or residents of a permanent supportive housing program. That includes emergency shelter and transitional housing staff, street outreach workers, caseworkers, peer advisors, reception and admin support staff and maintenance and custodial staff.

Applicants must earn 80% or less of their area median income. For an individual in the Seattle metro area that’s $66,750 or less a year. They must attest that the money will help with an economic hardship such as rent or mortgage payments, utilities loans, or transportation costs. 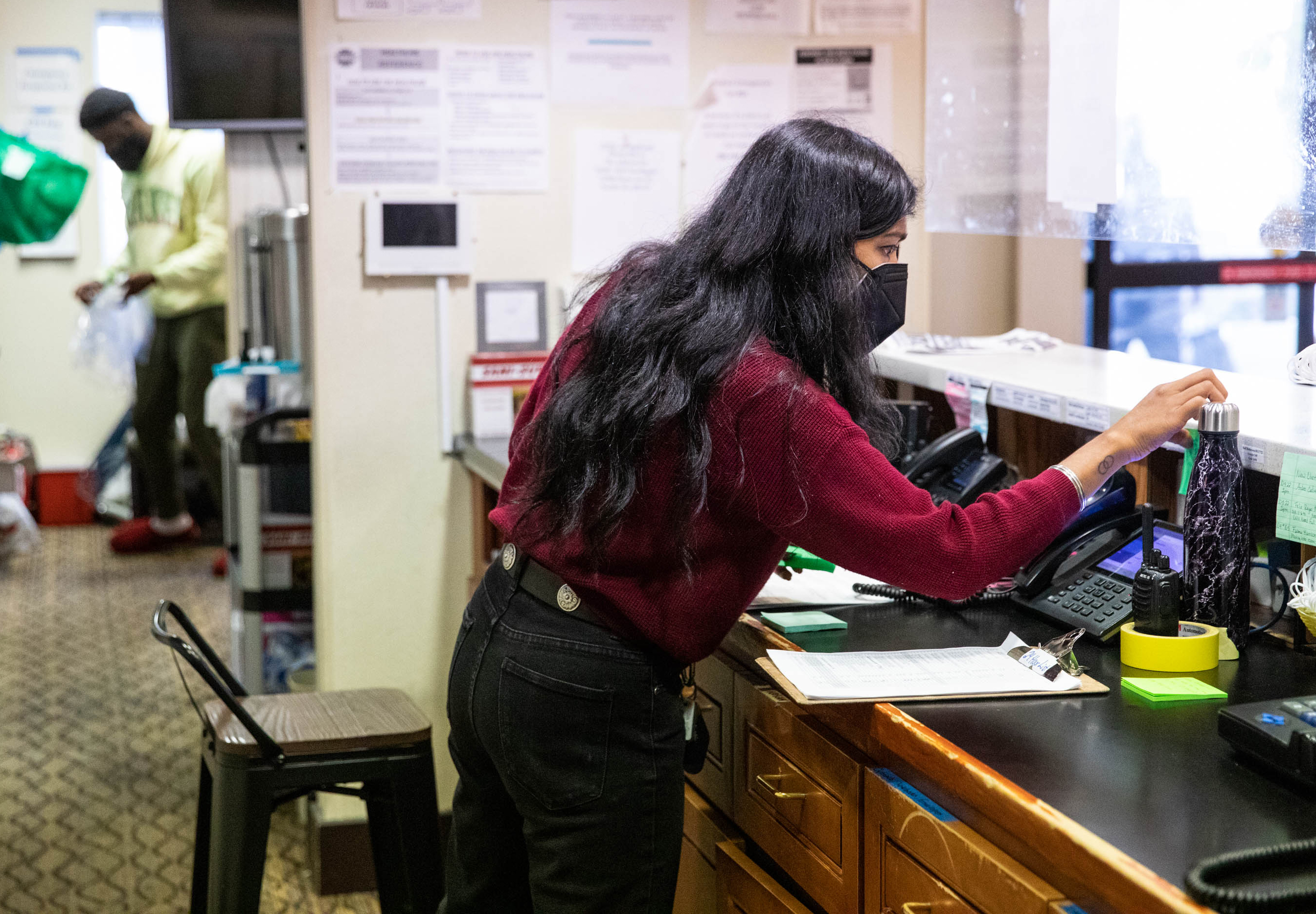 Proving economic hardship will be easy for many in the industry. Desvigne said she and her co-workers often talk about how many of them rely on the same safety-net programs as their clients, such as food stamps and Section 8 rental-assistance vouchers. For Desvigne, the state stipends will help her play catch-up on bills she owes and cover upcoming moving expenses, since her landlord is about to raise the rent beyond what she can afford.

“When you’re living paycheck-to-paycheck, you get good at juggling. But this will get some weight off me as far as being able to get caught up again,” she said.

The program will distribute the stipends through June 2, 2023. As an incentive for people to stay in their jobs, applicants who qualify for a first-round stipend are eligible for another payment of up to $2,000 six months later if they remain employed at the same organization. Because the program ends in June 2023, applicants must apply for their first stipend by Dec. 9 to qualify in time for the second stipend.

The state’s Department of Commerce is using $500,000 of the earmarked federal dollars to pay for a study of current working conditions in the homeless-services industry and ways to improve retention.

State Rep. Nicole Macri, D-Seattle, led the push for the stipends in the legislature. Macri is also deputy director of the Downtown Emergency Services Center (DESC) in Seattle. She said her goal with the study is to figure out what the state’s role should be in funding homeless-services operations. Traditionally, she explained, the state Housing Trust Fund has been used to pay for low-income housing construction.

Part of the challenge of raising wages in the industry stems from the complex system of contracts that service providers rely upon to pay for operations, salaries and most other costs. One nonprofit might have several contracts from the county along with a federal contract. If funding from only one of those four contracts increases, said Macri, it’s difficult for a provider to raise wages across the board.

King County Regional Homelessness Authority CEO Marc Dones said that to really address wages, local, state and federal contracts all need to increase. The Authority has lobbied for more money from Seattle and King County (which set the Authority’s budget), in part to increase pay and better retain workers. Without it, Dones said, the region won’t be able to address homelessness.

“In the homelessness sector and broadly in the human-services sector, [the work is] just people helping people,” they said. “And in absence of the people, there’s not work that can happen.”

The Seattle City Council voted unanimously in 2019 to peg social-service contracts to the real rate of inflation in recognition of lagging wages and rising costs. Mayor Bruce Harrell’s 2022 budget proposal would cap service-provider wage increases at 4%. At less than half the current 8.25% inflation rate, that increase would amount to a pay cut.

Homeless-service work has always been poorly paid, said Andrea Carnes, Plymouth Housing’s chief operating officer. But as the cost of living has increased, the gap between wages and expenses has become insurmountable for some.

When Carnes started at Plymouth 10 years ago, most employees lived in Seattle, she said. Now many have been pushed into south King County and Pierce County by steep housing costs. Commuting two hours into the city for $20 an hour, “you can’t make that work anymore,” she said.

The increased challenges of the work have also created a downward spiral of working conditions. Permanent supportive housing like Plymouth’s requires 24/7 staffing. As people quit, it makes work much harder for those who remain, which can lead to more turnover.

“It means the person who’s sitting at the front desk is being asked ‘Can you stay another four hours, then another four hours on top of that?’” said Carnes. “All of a sudden you’ve worked 16 hours. Do that a couple times a week and you don’t want to work there anymore.”

Plymouth is losing people to places like Taco Time NW and Starbucks, which offer $17 to $23 an hour starting pay for less stressful work. Carnes said the organization’s 15% employee vacancy rate has held steady since even before the pandemic. 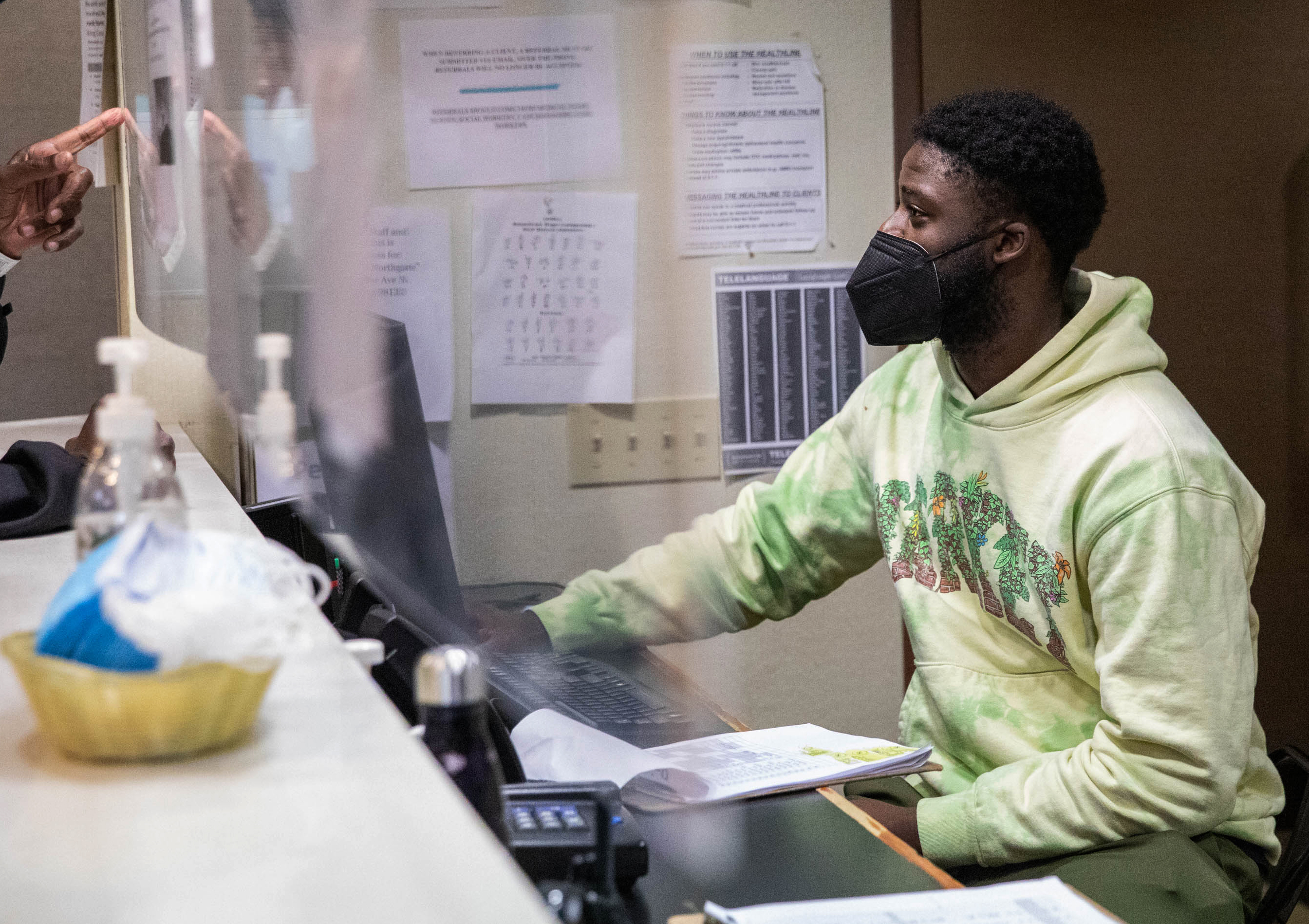 Macri said that DESC, where starting annual wages are around $40,000, currently has 150 to 200 open positions among its 900-person staff. She said many of those positions were added during the pandemic to reduce the workload of existing employees that they’ve been unable to fill.

“We need a paradigm shift of really understanding [that] homeless services is a part of the first-responder system,” said Carnes. “When I look at the way we treat firefighters and healthcare workers and other emergency responders, there’s investment in living wages and education and ongoing training. It’s seen as necessary. Nobody ever thinks about how many grants you need to get to have the right number of firefighters.”

The City of Seattle recently began offering $30,000 bonuses for experienced police officers and $7,500 bonuses for new recruits to improve hiring and retention.

Raising wages is the primary goal for homeless-services advocates and providers. And that alone will be a serious challenge.

“This isn’t ‘Oh, we need to raise wages to meet inflation, 7% to 10%,’” said Macri. “We need to raise wages 40% for people to be able to live close to where they work. That is not typically a challenge that can get solved in one legislative session or one city or county budget cycle.”

Beyond wages, there’s a push for more and better benefits and workforce development opportunities. Dones, of the county homelessness authority, said they’ve heard stories of service workers leaving for the private sector just to get paid family leave.

“Providers deserve, and frankly my own staff, deserve to have [contract] rates that allow us to pay for the kinds of benefit structures that folks in the private sector enjoy: leave for new parents, discounts at gyms, free ORCA cards,” they said.

Desvigne wants to see more support for mental health and paid time off.

“There should be a set-aside time without repercussions that you can take a mental health day,” she said. “This kind of work makes you feel like you shouldn’t take time off. … The stuff we hear is very traumatic. It’s traumatic for our clients to experience. Then there’s secondary trauma hearing these stories over and over and over again.”

The sort of wages and benefits increase the homeless-services industry is calling for will likely take years to materialize, if it ever does. In the meantime, Desvigne said there are ways everyone can help.

People stopped volunteering at homeless-services programs like hers during the pandemic and many have not yet returned.

“That give-back spirit has died off,” she said. “Sometimes it helps us survive. We need people willing to come file paperwork. Or even just tend the garden.” 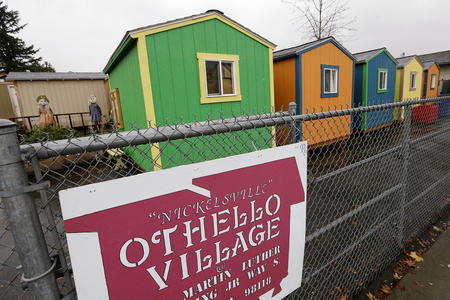 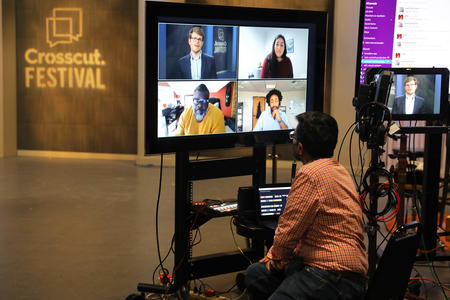 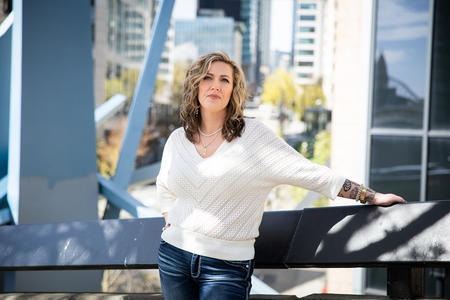