Polling shows that Americans' concern toward the war is waning. But for Washingtonians with connections abroad, the last eight months has been a collective trauma. 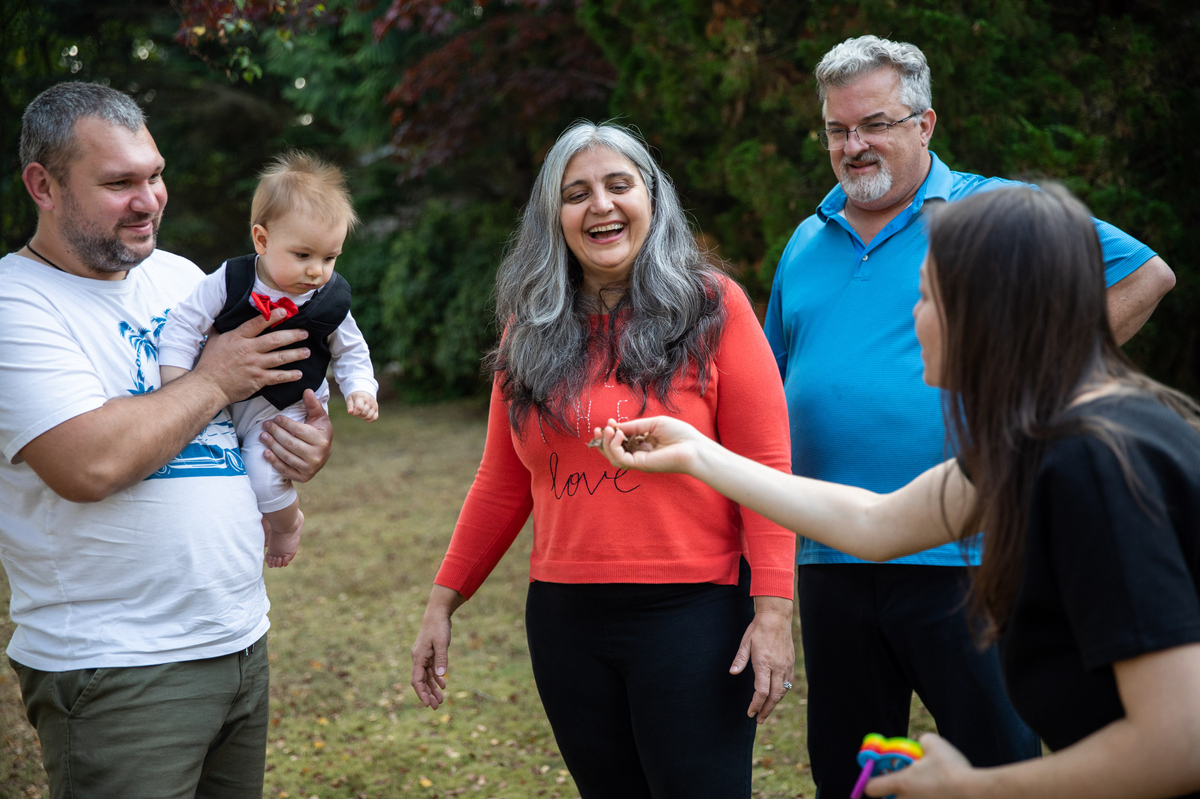 Olena Roze throws leaves to entertain 10-month-old Max as he’s held by his father Danylo Roze while they hang out in the yard on Tuesday, Oct. 18, 2022. Irina and John VanPatten, center, opened their home to the Ukrainian family, who have been staying with them since May. (Amanda Snyder/Crosscut)

Nearly eight months into Russia’s war with Ukraine, life remains nowhere near normal for Washingtonians with loved ones in Eastern Europe.

“It’s been so scary, it’s been awful, I’m drained,” said Katya Suvorova of Seattle, who was born in Moscow but left in the late 1990s when her mother fled the country. “And it’s not about me, it’s about everybody else. But just personally, I’m very sad and very drained.”

The Kremlin’s invasion in late February has continued to send refugees to the United States and elsewhere. News coverage of troops vying for territory and shifting military strategies continues, but concern about the war and its impact on regular people has dwindled in the American consciousness.

A smaller share of Americans report feeling “extremely or very concerned about a Ukrainian defeat” than earlier this year, according to September survey data from the Pew Research Center – collected on the heels of Ukrainian military advances but before Russia announced a partial mobilization. Similarly, a smaller share of adults said they were keeping up with news on the war extremely or very closely.

For Washingtonians from Eastern Europe, it hasn’t been as easy to stop paying attention to a war that has threatened their loved ones with displacement, fears of conscription and the potential for nuclear war.

“I wake up every day and I think about it,” said Suvorova, who asked to use a pseudonym for her surname to protect her writing career.

Suvorova’s mother and sister are in the United States, but many of her relatives live in Eastern Europe. She’d hoped to meet with some of them in Finland for Christmas, plans that have since been derailed by the war. Now she doesn’t know when she’ll get to see them, worried it could be years or – in the case of her grandparents – forever. Still, Ukraine’s military advances have been encouraging.

“Thank God… That is not what I thought was going to happen,” Suvorova said. “Russia has a big military.”

Ukrainian progress gave Irina VanPatten of Everett – who is from Moldova and has family in Eastern Europe – hope that the war could end this year. Now with Russia’s partial mobilization, she isn’t so sure. 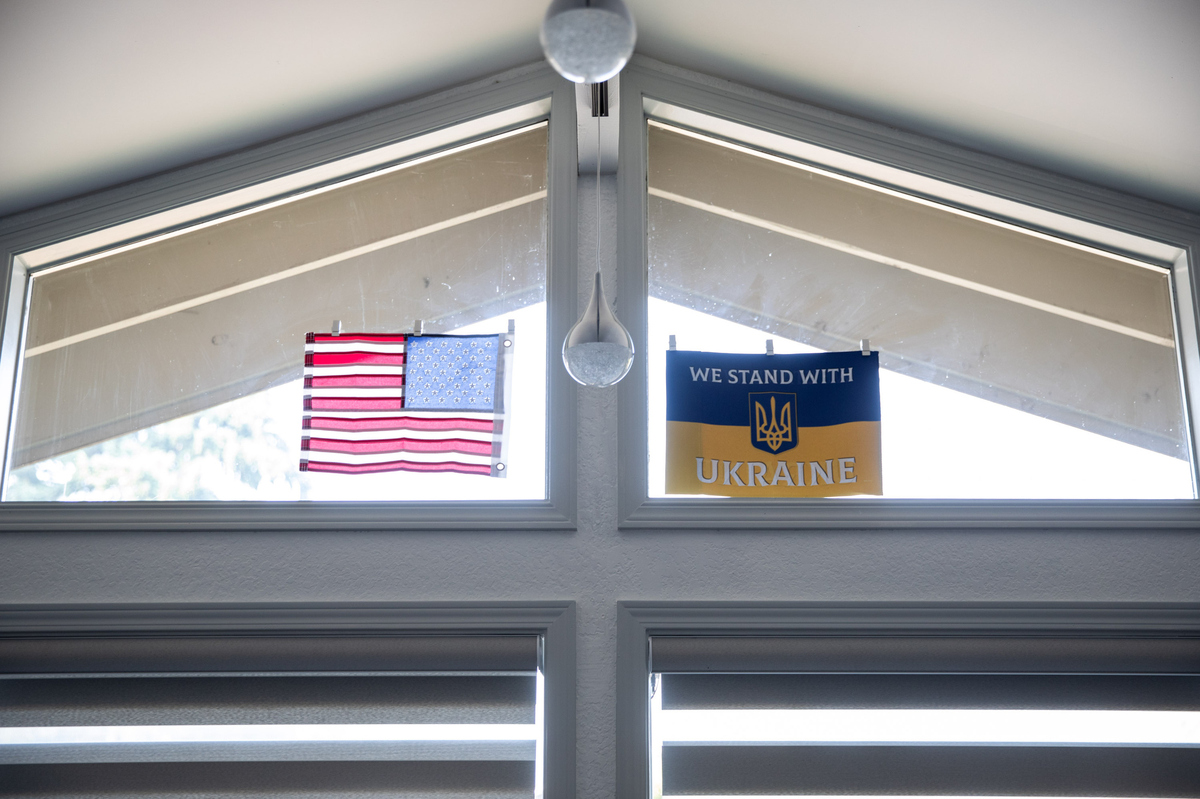 Irina and John VanPatten hang a Ukrainian flag in their home on Tuesday, Oct. 18, 2022. (Amanda Snyder/Crosscut)

Irina and John VanPatten hang a Ukrainian flag in their home on Tuesday, Oct. 18, 2022. (Amanda Snyder/Crosscut)

Leaving Russia and Ukraine behind

Men fled after Russia announced its partial mobilization, fearful they could be drafted next, including one of VanPatten’s relatives who escaped in early October. Liliya Askarova’s male relatives don’t see a way out of the draft.

“Their responses were basically like, ‘We don’t decide anything here,’” said Askarova of Newcastle, who was born in Russia and grew up in Kyiv.

She described the war as a collective trauma for people from Ukraine, which Askarova’s parents were forced to abandon earlier this year as war broke out. They traveled to Sweden where they have family, joining a massive surge of more than 13 million Ukrainians displaced since Russia’s invasion started.

As the war progressed, Askarova thought about bringing her parents to Washington, where she lives, until her mother found out she had tuberculosis. She suspects her mom got the disease during the journey from Ukraine, which Askarova described as arduous, with minimal social distancing and cold temperatures.

Her parents were eventually able to return home to Ukraine, but with the war heating up again, Askarova is considering bringing them to Washington for the winter.

“I’m fearing that this mobilization means that [Russia] will have a second attempt,” Askarova said. “And will try to basically grab more territories.” 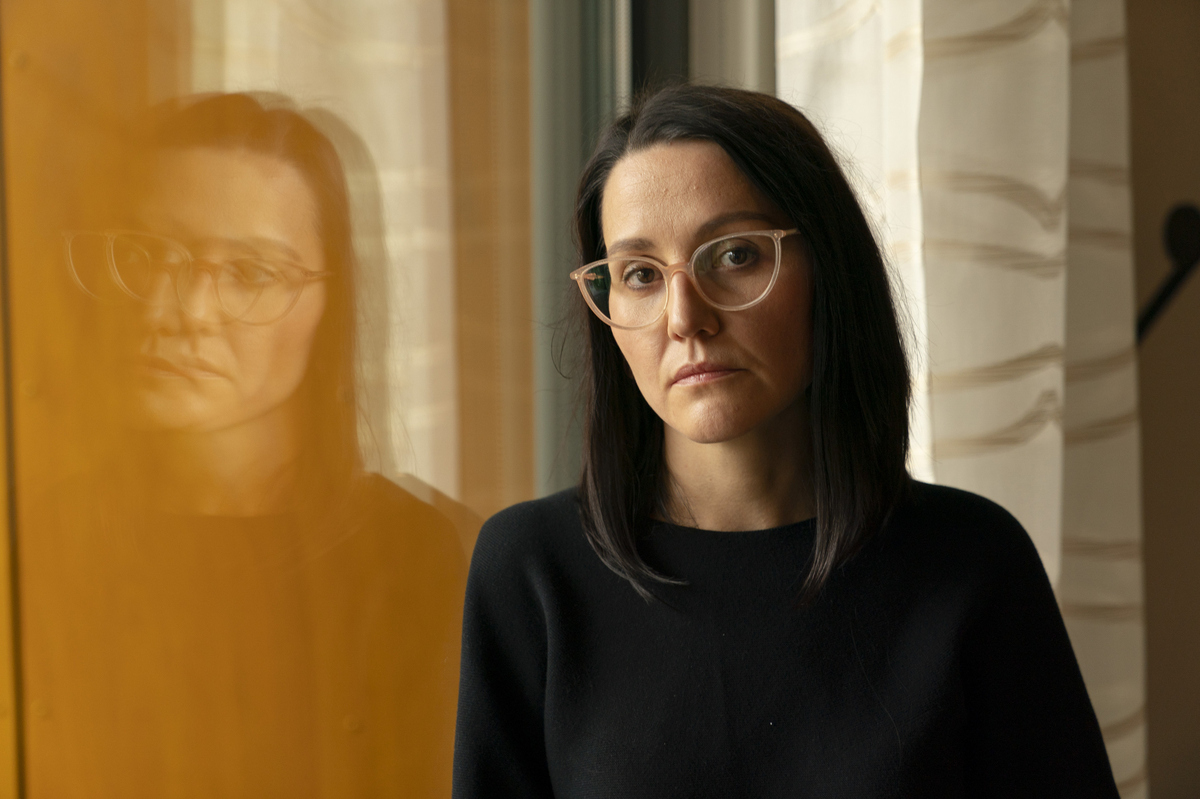 Liliya Askarova poses for a portrait at her home in Newcastle, Wash., on March 14, 2022. (David Ryder/Crosscut)

Liliya Askarova poses for a portrait at her home in Newcastle, Wash., on March 14, 2022. (David Ryder/Crosscut)

Living through a war

Life has been just as difficult for Washingtonians’ relatives who are staying put in Eastern Europe. One of Suvorova’s relatives may have to close his business as his employees get conscripted, while another lost their job for being a dissident.

From the beginning of the war, Russia has cracked down on independent reporting about the invasion and limited access to foreign news and Facebook. Askarova, Suvorova and VanPatten spoke to Crosscut earlier this year about how some of their relatives were feeding into Russian propaganda.

“It’s hard to get information from my family,” Suvorova said. “Because, you know, everything’s being monitored.”

VanPatten remains hopeful that Ukraine will win. The death toll it will take to achieve this, however, troubles her. Military casualties aside, more than 5,000 civilians in Ukraine have been killed since the start of the invasion, according to an August update from the United Nations.

The potential for nuclear warfare – which Putin has indicated is on the table – only elevates the fear of violence. More than 40% of Americans reported being extremely or very concerned about a potential accident at one of Ukraine’s power plants, according to the Pew Research Center.

“It’s scary for us that there are nuclear threats, but it is also really scary for my family,” Suvorova said. “They’re the first ones that get hit.” 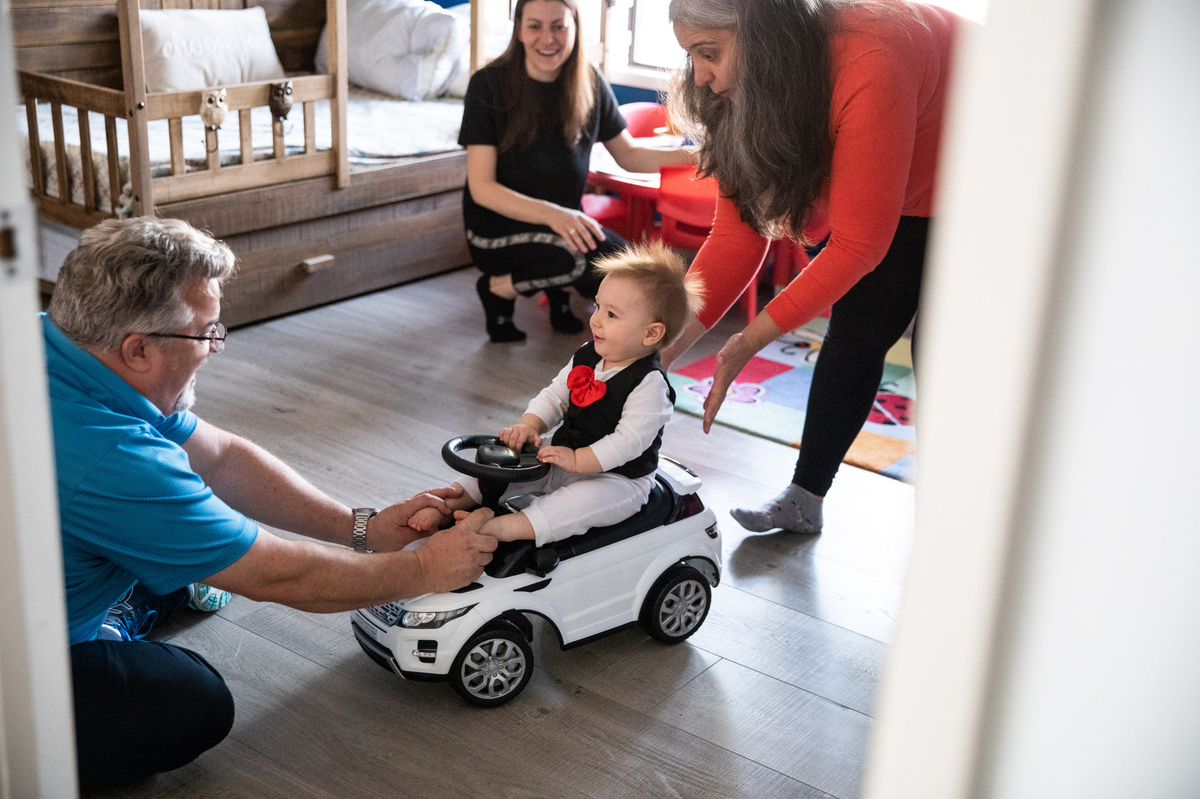 Ten-month-old Max plays with his mother Olena Roze, center, and their hosts Irina, right, and John VanPatten in their home on Tuesday, Oct. 18, 2022. The war in Ukraine forced Olena and her family from their home. The VanPattens hosted a family from Afghanistan prior to hosting the Roze family. (Amanda Snyder/Crosscut)

Ten-month-old Max plays with his mother Olena Roze, center, and their hosts Irina, right, and John VanPatten in their home on Tuesday, Oct. 18, 2022. The war in Ukraine forced Olena and her family from their home. The VanPattens hosted a family from Afghanistan prior to hosting the Roze family. (Amanda Snyder/Crosscut)

VanPatten has helped people affected by the war in her own way, opening her home in May to a Ukrainian family with an infant.

“I’m thinking how many other babies… didn’t get this chance,” VanPatten said. “It’s just too overwhelming sometimes, just to think about it.”

The fighting that forced this family from their home mirrors a trend VanPatten sees sweeping the globe.

“I feel like it’s more than Ukraine, it’s like [the] entire world is now wrestling fascism versus democracy, including in the U.S.,” VanPatten said. “I’m optimistic that democracy will win.”

Askarova also views the war in a broader context, referencing Iranian protests that erupted in the name of Mahsa Amini, a 22-year-old woman who died after her arrest for allegedly donning a headscarf incorrectly. She lauded Iranians for demanding change from their government and wished to see the same among Russians, many of whom seemed unaffected by the war based on her observations on social media.

“I understand that they are limited,” Askarova said of their ability to speak freely. Still, she wished they could signal more empathy and understanding.

Suvorova wants to see the same from her fellow Americans. Nearly 40% of Americans reported in September being extremely or very concerned about a Ukrainian defeat, a drop from the 55% who reported the same to the Pew Research Center earlier this year. The more recent survey also found that about one-quarter of Americans, compared to 36% in May, were following news on the war extremely or very closely.

Suvorova feels this pattern in her personal life: Many of her friends and family don’t check on her, even though they know she has loved ones in Eastern Europe.

“I think that they just don’t care,” she said. “It’s not affecting them.”