The system, which compares employment eligibility forms to government records, has been described as error-ridden, cumbersome and redundant to the I-9. 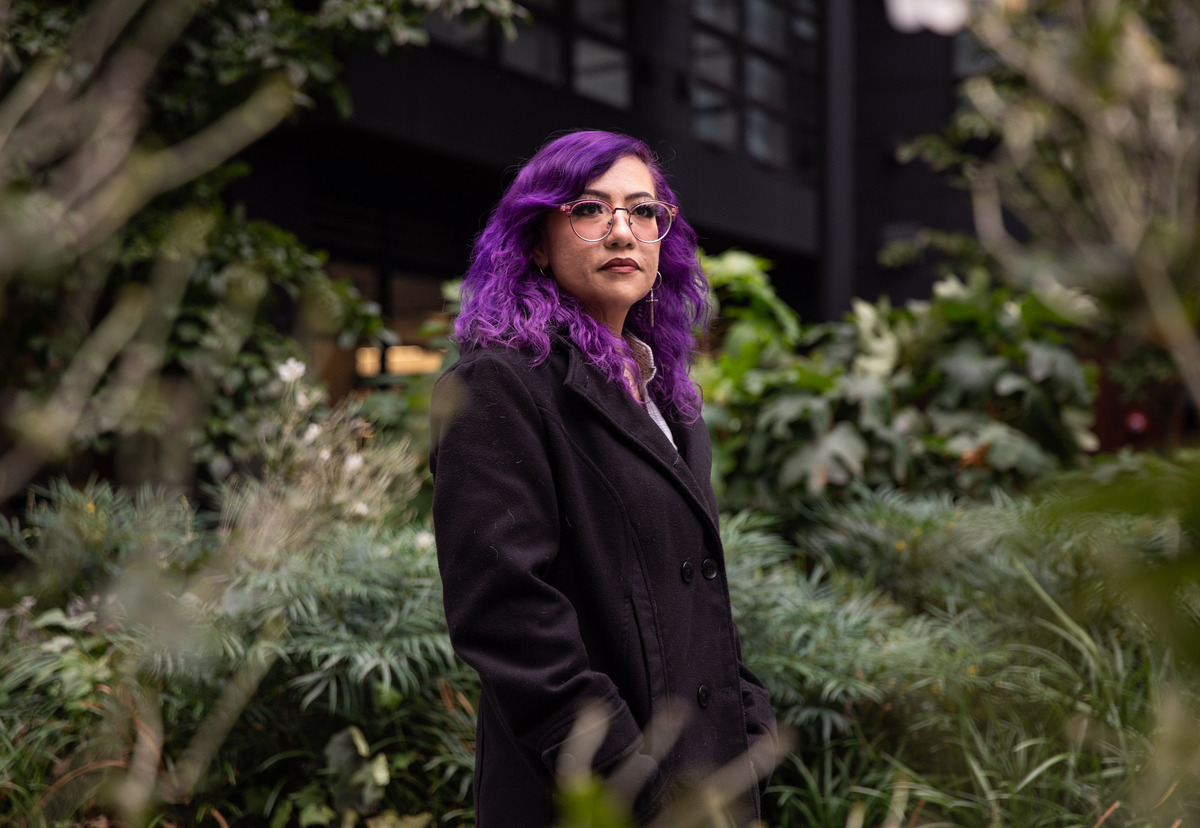 Stephanie Valerdi, pictured here in Queen Anne on Monday, Nov. 1, 2022, is an employee at Perinatal Support Washington, a nonprofit that helps people navigate mental health struggles as they transition to parenthood. The organization received more than $600,000 from Pierce County, but refused the money because it was contingent on running employees through E-Verify. (Amanda Snyder/Crosscut)

A nonprofit’s push to help Pierce County families has bumped into an ongoing debate over E-Verify, the employment-verification tool lauded by some tough-on-immigration advocates, which has already gotten the boot in other parts of the state.

Perinatal Support Washington, a nonprofit that helps people navigate mental health struggles as they transition to parenthood, received more than $600,000 to expand its culturally matched peer support program into Pierce County, meaning families get paired with people of a shared background, like race or immigration status.

The nonprofit refused the money after learning it was contingent on running employees through E-Verify, an electronic system that compares information from employment eligibility verification forms (known as I-9s) to government records. E-Verify is required for federal contractors, but more than 20 states also mandate its use for all or some employers. Washington is not among those states, but Pierce County requires the use of E-Verify for county contracts that exceed $25,000.

Some have railed against E-Verify for allowing unauthorized workers to pass through the system, but Perinatal Support Washington and other advocates in Pierce County worry about the opposite.

“We felt that it needlessly causes anxiety within legal immigration communities,”  said Allie Johnson, the executive director of Perinatal Support Washington, adding that this includes her staff. “They don’t want to get caught up in an inaccurate system.”

Perinatal Support doesn’t want to send employees through a system known for falsely labeling people as ineligible to work. Critics have also described E-Verify as redundant to the federal government’s I-9 verification process, while E-Verify’s reputation for being burdensome factored into decisions by the cities of Yakima and Centralia to stop using it in recent years.

Perinatal Support is leading a push to end E-Verify’s use among Pierce County contractors. The effort received support from more than 200 individuals and groups. An ordinance calling for E-Verify’s removal passed along party lines among Pierce County councilmembers, with four Democrats – all of whom sponsored the legislation – in favor and three Republicans against, before being vetoed by the county executive on Oct. 6. Now those who want to rid the county of the verification tool for good must override the executive’s decision within 30 days of his veto through another vote, but they need to convince one dissenting member to vote yes. Attempts to reach the three dissenting councilmembers for comments for this story were unsuccessful.

“That was the first I’d ever heard of any concerns with it,” said Executive Bruce Dammeier of the push to remove E-Verify. “And we’ve been doing it for 10 years.”

He described Pierce County – where more than 10% of the population is foreign-born, according to 2021 American Community Survey estimates – as a welcoming environment for immigrants and argued that E-Verify protects workers from falling prey to exploitative employers.

“Pierce County can’t claim to be welcoming to immigrants with a code like this on the books,” she said.

Who gets rejected by E-Verify

Stephanie Valerdi’s experiences as an immigrant from Mexico, and as someone who has dealt with postpartum depression and anxiety, help her connect with Spanish-speaking families navigating the same challenges.

“We are feeling so isolated in this country and mental health is still really stigmatized within our culture,” said Valerdi, a parent resilience specialist at Perinatal Support.

Employees from these communities also risk being misread in E-Verify, according to advocates trying to get rid of the tool. A community letter of support calling for E-Verify’s removal cited critiques that the American Civil Liberties Union made in 2013 indicating that the system disproportionately affects certain groups, including legal immigrants, naturalized citizens and people with several surnames, which is common in Hispanic communities.

An E-Verify satisfaction survey from 2019 yielded a few responses from people who said the system struggled to verify individuals with multiple names. One respondent specifically indicated the system doesn’t work for those with “extended Hispanic surname variations/combinations.”

People backing the push to remove E-Verify in Pierce County added that other groups may experience hiccups, including those who change their names after getting married or LGBTQ+ community members who transition gender markers and names.

“It isn’t just an immigrant issue,” Valerdi said. “This feels like a human issue.”

One person who submitted testimony advocating for the ordinance shared their experience getting flagged in E-Verify with an Americanized name, which they said led to a change in their start dates and caused them to second-guess if they could keep the job.

For immigrants seeking employment, Valerdi thinks an E-Verify error could be especially daunting.

“They are coming to this job saying they can legally work,” she said, pointing out that an E-Verify error could breed tension and mistrust between an employer and employee. “If you already have this survival-mode mentality … You’re going to end up cutting your losses.”

The employment verification tool’s website offers a series of tips on how to complete the I-9 form to avoid getting a mismatch result: For people with two last names, E-Verify indicates that they must put both, including any hyphens, on their I-9.

The push to remove E-Verify in Pierce County

Executive Dammeier kept the system in place because, from his perspective, it does the job. If there are issues, he indicated he would be willing to participate in efforts to correct them.

Johsnon of Perinatal Support questioned the ability of one county executive to impact a national issue.

“I don’t know how one county executive thinks that they’re going to be able to change a national tool and in what way he might do that,” Johnson said. “I think it’s just lip service, personally.”

The executive acknowledged Pierce County may not be powerful enough to shift the system on its own (and reiterated that this was the first he had heard of issues with it at all), but if there are problems, Dammeier assumes, other places are experiencing them, too.

The latest push in Pierce County trails other efforts in Washington to get rid of E-Verify: The City of Yakima in 2019 removed a requirement for contractors to use the tool, describing it as a program that puts economic, regulatory and administrative burdens on small businesses. The city attorney of Centralia, which stopped using E-Verify in 2018, called the system cumbersome.

When the grievance made its way to Pierce County, it wasn’t news to McKinley McPheeters of First 5 Fundamentals, who testified in favor of getting rid of E-Verify.

“Our staff has had personal experience with it being a really cumbersome process,” said McPheeters. “And very duplicative of what the I-9 already does.”

Councilmember Derek Young felt the push to remove E-Verify may be less compelling if it was completely accurate.

“It doesn’t seem to provide any benefit, but it does provide significant obstacles,” said Young, who represents District 7 and co-sponsored the ordinance. “There’d be less of an argument if it was 100% accurate. It’s not.”

E-Verify statistics through the fourth quarter of Fiscal Year 2021 found that out of 42,526,352 cases, about .13%, or more than 50,000 employees, receive initial mismatches but are confirmed as able to work after contesting and clearing up the issue.

“Imagine you’re someone who does have the right to live and work here,” Young said. “But because of a mistake in the system that is difficult to get corrected, you’re just denied the right to work.”

Beyond that, getting rid of E-Verify just seemed simple to Adan Espino, the director for external affairs and education at Mi Centro, a nonprofit based in Tacoma that serves Latinx and Indigenous communities, who testified in favor of the ordinance.

The charge that E-Verify is redundant seemed to Councilmember Ryan Mello like a convincing-enough argument to get people on board.

“We keep hearing from folks across the political spectrum, especially our friends on the right, about how they want to get rid of duplicative, unnecessary rules and regulations,”  said Mello, who represents District 4. “Here’s an easy opportunity to do that.”

Lawmakers who champion strict immigration policy have backed E-Verify; however, it hasn’t been without problems in states that mandate the tool.

In 2019, arrests by U.S. Immigration and Customs Enforcement at Mississippi chicken-processing plants led to broader conversations about E-Verify, including the ways workers can skirt the system by using the identities of other people, like legal residents, dead citizens or their children born in the U.S.

More recently, Florida Gov. Ron DeSantis, who has publicly backed E-Verify, came under fire in October after news broke that his highly publicized political stunt shipping migrants to Massachusetts was carried out in part by paying a Venezuelan migrant who cannot work in the U.S.

Councilmember Mello emphasized that the fight for E-Verify’s removal goes beyond partisan politics.

“This is not about the Democratic majority trying to score political points,” he said. “This is about real people being harmed. This is about real services not being offered in culturally competent, effective ways.”

The future of E-Verify in Pierce County

Perinatal Support works in Pierce County a little bit already, but if there isn’t enough traction to override the Executive’s decision, the nonprofit will not fully expand as was originally planned.

Johnson noted that this is particularly devastating because families, including those Perinatal Support works with, are getting priced out of King County and going to Pierce County.

“I don’t know where our organization is going to be moving as far as advocacy beyond this Pierce County work,” Johnson said. “I will say that we won’t be signing contracts that have E-Verify clauses in the future.”