The iconoclastic leader, who coached the Cougars from 2011 to 2019, was a colorful character still remembered by fans and journalists for his impact. 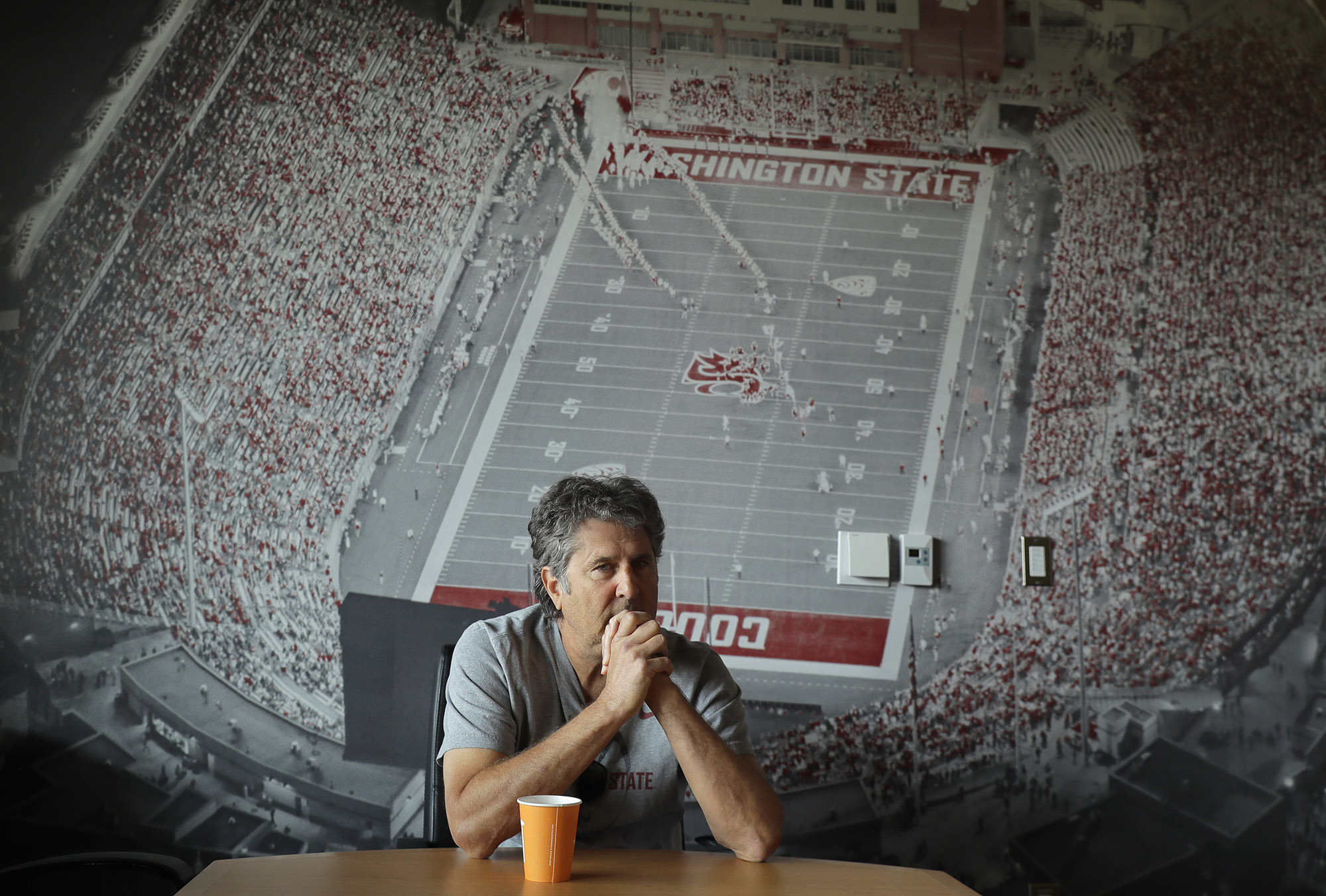 When Mike Leach was hired to coach the Washington State football team in 2011, he was asked why he decided to resume his career with the downtrodden program.

“Why not Washington State?” Leach replied, thereby cementing a relationship that lasted eight seasons in which he returned the woeful Cougars to relevancy on the football field.

Leach, who moved on to Mississippi State after the 2019 season, died Dec. 12 of complications from a heart attack. He was only 61.

His finest work may have occurred at Washington State. Before Leach arrived, the Cougars had endured nearly a decade of mediocrity, with no bowl appearances and declining attendance.

One of the Cougars’ most successful eras

Under Leach, the Cougars went to six bowl games and packed Martin Stadium with fans that loved or hated him for his anarchic ways. Friends with Donald Trump and Matthew McConaughey, Leach provided great interviews and stories that were often repeated in bars and barbershops around the state.

The Cougars paid homage to him by putting his picture on the stadium scoreboard the day after he died.

Leach, who won 158 games in his career (with 107 losses), oversaw one of the most successful eras in Cougars football history. His record at WSU was 55-47, good for third place behind Babe Hollingbery and Mike Price among WSU coaches.

Leach holds the second-highest winning percentage (.539) by a WSU coach who spent at least five years at the school. He also guided the Cougars to a school-record five consecutive bowl games, missing the postseason just twice.

It was former WSU athletic director Bill Moos who hired Leach. Moos made a late 2011 pilgrimage to Key West, Florida, where Leach was living after being fired by Texas Tech, to pitch the coach on joining the Cougars.

Moos and late WSU President Elson Floyd were both concerned that the football program needed to improve after going 9-40 in four seasons under the fired Paul Wulff.

“We at Washington State were kind of stagnant,” Moos said. “There was apathy in the fan base.

“The facilities were subpar. There was a defeatist attitude,” Moos said. “We were lacking the sizzle.”

Moos and Floyd also poured $100 million into remodeling Martin Stadium and erecting a football operations building, a debt that remains on the books.

Looking for a new coach, Moos knew that Washington State had a history of employing competent coaches who were also big personalities — people like Jim Sweeney, Jim Walden and Mike Price.

“We needed some national attention. That’s what I saw in Mike Leach,” Moos said. “His offense could entertain the fans while we were building the program.”

Leach had a losing record his first season, but beat archrival Washington in the Apple Cup. By his second year, they qualified for a postseason bowl game, Moos said.

“A couple more years of building and we got it consistent,” Moos said. “The rest is history.”

He noted that Leach beat Pac-12 power Oregon four years in a row.

“He beat everybody in the conference and beat a lot of them a lot of times.”

Back on the football map

Leach also brought plenty of national attention through his quirky personality, and that was a help in recruiting, Moos said.

“He was a great fit … Washington State University was lucky to have him for the eight years they did. He put us back on the map and we’ve stayed there.”

Leach’s 2018 team, led by Pac-12 Offensive Player of the Year Gardner Minshew, beat Iowa State in the Alamo Bowl to clinch the only 11-win season in school history.

Leach lured Minshew to Pullman as a transfer, telling him: “You can hold a clipboard at Alabama or you can come up here and lead the country in passing.” Minshew, who had been thinking of moving into coaching before his transfer, went on to play in the NFL.

Moos noted that the on-field success was accompanied by better grades among the football players, which Leach stressed.

He took the head coaching job at Mississippi State. His Bulldogs went 19-17, making bowl appearances in 2021 and 2022. In his last game, Leach led Mississippi State to a 24-22 upset win over No. 20 Mississippi in the Egg Bowl rivalry.

“There’s so many people his reach has touched and he’s obviously unique,” current WSU coach Jake Dickert said at a news conference. “You listen to the stories and you learn a lot about him, but you also see the success and doing it the hard, tough way.”

Leach gained notoriety for his wry sense of humor, regularly going viral on social media for off-the-wall interview responses. It wasn’t uncommon for Leach’s news conferences to move quickly into topics other than football, including thoughts on Pac-12 mascot battles, his candy preferences and marital advice. He would criticize his players for spending too much time with their “fat little girlfriends” or for playing like a bunch of zombies.

He liked to dress in Hawaiian shirts, and emitted a tropical, laid-back vibe. He was well-known for his interest in pirates, and while at WSU was often called The Pirate of the Palouse. While many college football coaches dress like they are just coming off the golf course, Leach looked like he was just getting home from a Jimmy Buffett concert.

Not all roses or Rose Bowls

His coaching career was not without controversy. Leach was fired at Texas Tech in 2009 after being accused of mistreating an injured player. At WSU, Leach was criticized for endorsing Republican presidential candidate Donald Trump at a 2016 rally in Spokane.

Shortly after his hire at Mississippi State, Leach was forced to apologize after sharing a Twitter meme that depicted a woman knitting a noose for her husband over COVID-19 lockdown frustrations.

Leach co-authored two books, Swing Your Sword: Leading the Charge in Football and Life and Geronimo: Leadership Strategies of an American Warrior. He co-taught a five-week seminar at WSU, “Insurgent Warfare and Football Strategies,” with Spokane County treasurer and former state Sen. Michael Baumgartner. The seminar covered the similarities between guerrilla warfare and football.

Leach and Baumgartner were friends and travel companions who visited 10 foreign countries together. “He was the same person in front of the camera as he was away,” Baumgartner said. “There was a showman and entertainer in him, away from the camera too.”

“But what he really was was a hard old cowboy from Cody, Wyoming,” Baumgartner added.

Baumgartner grew up in Pullman, where his father was a forestry professor, and said Leach restored pride in Cougar football.

“Mike brought WSU football back from the abyss,” Baumgartner said. “He made them tough and fun. Toughness was his currency.”

ESPN GameDay, the venerable Saturday-morning pregame show, made its only trip to Pullman in that magical 2018 season, drawing a massive crowd of fans.

Leach was raised in Cody, Wyoming, and graduated from BYU in 1983 with a bachelor’s degree in American studies. He earned a law degree from Pepperdine in 1986, but decided he preferred coaching football to law.

He launched his collegiate coaching career in 1987 as an offensive line coach at Cal Poly.

In 1989, Leach became offensive coordinator at Iowa Wesleyan. There, he teamed with coach Hal Mumme to create the pass-happy Air Raid. The two took the offense to Valdosta State in 1992, then to Kentucky in 1997.

After two seasons coordinating the Kentucky offense and one as Oklahoma’s offensive coordinator, Leach landed his first Division I head coaching job in 2000 when he joined Texas Tech.

I covered Leach for The Associated Press during his eight years in Pullman. Never have football press conferences been more unpredictable or more fun. And the product on the field was almost always exciting.

Nicholas K. Geranios has spent 42 years as a news reporter, the last 40 with The Associated Press. He retired from the wire service in 2022 and lives in Spokane.