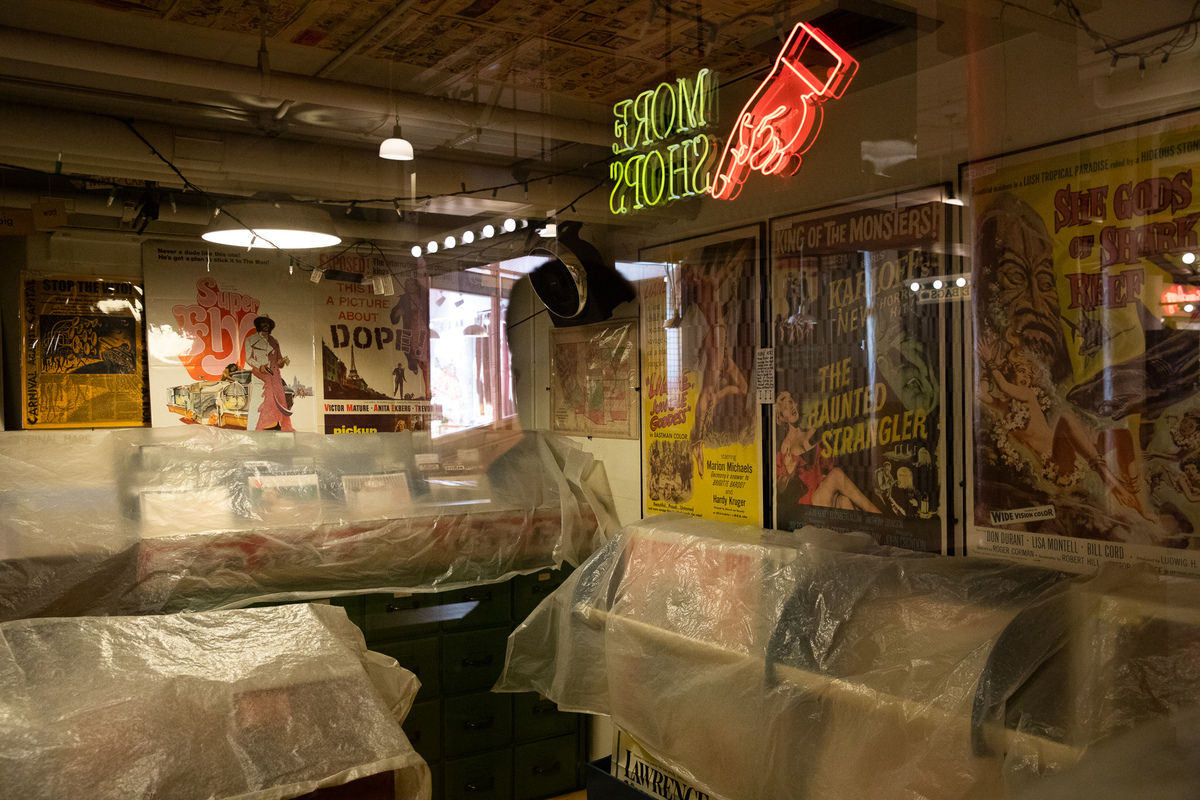 Vintage newspapers and magazines are seen on their shelves in protective plastic covering at Old Seattle Paperworks during what would have been normal business hours at Pike Place Market, March 12, 2020. Many businesses in the market started closing after the state ordered that gatherings of no more than 250 people were allowed. That has since changed, with groups of 50 or larger no longer being permitted, and advice from health officials is to stay at home and never be in groups of larger than 10. (Matt M. McKnight/Crosscut)

With the towering twin crises of COVID-19 and a looming recession, Seattle must show the leadership that previous generations of government shirked. Absent a much-needed but still emerging plan to tax major corporations, city government should strongly consider dipping into its emergency reserve funds to pay for measures that will protect the most vulnerable Seattleites.

The city of Seattle maintains two separate cumulative reserve funds: the revenue stabilization account (“rainy day fund”) and its capital projects account. A recent city white paper explains that both of these funds are maintained to help the city “address unanticipated events and declines in revenue.” At the end of 2017, funds in these two accounts totaled $153.7 million. By Washington state law, certain restrictions exist on how the cash in these accounts — which come largely from a 0.25% tax on real estate transactions — may be spent: Much of the money in the city’s reserve funds are limited to expenses related to capital improvement projects, transit infrastructure and public parks. But a second look at city spreadsheets, as well as recent Seattle history, shows that Seattle’s political leadership has considerable latitude in allocating these funds.

The city used rainy day funds in 2012 to cover an $18 million budget deficit in the aftermath of the Great Recession. And while debating an employee head tax on the city’s largest corporations, in 2018, city officials reluctant to tax big business suggested using rainy day funds instead. At present, the city dedicates $1 million from one of the accounts in its cumulative reserve fund to “spending on homelessness.” Unlike capital expenditures to the Seattle Department of Transportation and the Seattle Department of Parks and Recreation, the topical line item for “spending on homelessness” is not dedicated to a particular city bureau or agency, but appears as an ad hoc means of addressing an emergent need. And what could be more of an emergent need than today’s health and economic calamities?

Read more: 3 things local leaders must do to protect workers during coronavirus

For the thousands already sleeping outside and the tens of thousands in danger of missing rent payments in the coming months, the situation is as desperate as anything the city has ever seen. Concurrent with the crisis of coronavirus, the stock market has plummeted in recent weeks. Ninety percent of stock market gains since President Donald Trump took office in 2017 have been erased. To make matters worse, bars, restaurants and coffee shops will all but close (with exceptions for carryout and delivery) because of coronavirus, dealing an indescribable blow to Seattle’s market economy and the working people who make it run. We can wait for the situation to worsen. Or we could consider using emergency reserves for short-term relief, on the way to creating a more permanent economic safety net.

Had government heeded the warnings of climate activists these last few years, perhaps COVID-19 would not be the disaster it is today. The threat of health maladies like coronavirus have long been recognized as a danger of climate change; viruses formerly trapped beneath permafrost are suddenly freed by rising temperatures and melting icecaps. So far, there is no evidence that suggests coronavirus has a specific, climate-related cause. But regardless of the virus’ specific origin story, massive civic investment in universal health coverage as a preventative climate adaptation strategy likely would have meant fewer deaths, a reduction in economic travail and less panic with the arrival of COVID-19.

If it were all so simple, than why didn’t it happen? Because few in government were ever compassionate enough to try and conduct traffic at the intersection of global contagion and climate crisis. After 40 years of neoliberal policies that deign to run government like a corporation, grand ideas like Medicare for All or a Green New Deal have remained just that: costly ambitions attacked as “pie-in-the-sky,” until times of crisis reveal them to be past-due necessities. The time is now for government officials to step into a leadership void.

All across Seattle these last few weeks, we’ve seen inspiring examples of resilient communities and concerned elected officials standing up for themselves and others. Perhaps they could be doing even more with additional financial support from the city’s emergency reserves. Seattle creatives have organized several relief funds for struggling artists. Why not partner with the Seattle Office of Arts & Culture to create an official relief fund?

After devoting $1.5 million to help rescue struggling small businesses, Seattle Mayor Jenny Durkan was successfully lobbied by Seattle City Councilmember Kshama Sawant and her organization, Socialist Alternative, to put a moratorium on evictions and rent increases in the time of COVID-19. Why not go a step further and work with the Seattle Office of Housing to create a permanent rental assistance fund?

At a time when local media is as important as ever, many have rallied behind The Stranger, as substantial layoffs and declining ticketing revenues threatened to collapse one of the stalwarts of Seattle journalism. Why not dedicate some of our emergency reserves to the city’s cable television franchise subfund — which pays for public access television in Seattle and is financed by impact fees assessed on telecommunications corporations like CenturyLink and Comcast — in order to fund publicly subsidized print journalism in Seattle?

Speaking to the global financial elite at the Wall Street Journal CEO Council networking panel at the onset of the 2008 Great Recession, President-elect Barack Obama’s incoming chief of staff, Rahm Emanuel, famously warned, “You never want a serious crisis to go to waste.” Author Philip Mirowski later absorbed Emanuel’s remarks into the title of his 2013 book Never Let a Serious Crisis Go to Waste, a sweeping indictment of Bush-authored bank bailouts, which didn’t bolster everyday people facing desperate financial straits. Coincidentally, the cover image of Mirowski’s book was a graphic of Seattle’s corporate skyline teetering dangerously on the edge of a cloudy cliff.

The stormy start to the 2020s presents Seattle with a silver lining it should seize — the opportunity for government to remake our local economy into a real force for equity. Are we in an emergency or not? We must answer that question before the rising death tolls and dwindling savings accounts of struggling Seattleites do it for us.