Built around the principle of mutual aid, the Unemployed Citizens League organized to help the poor and influence local politics. 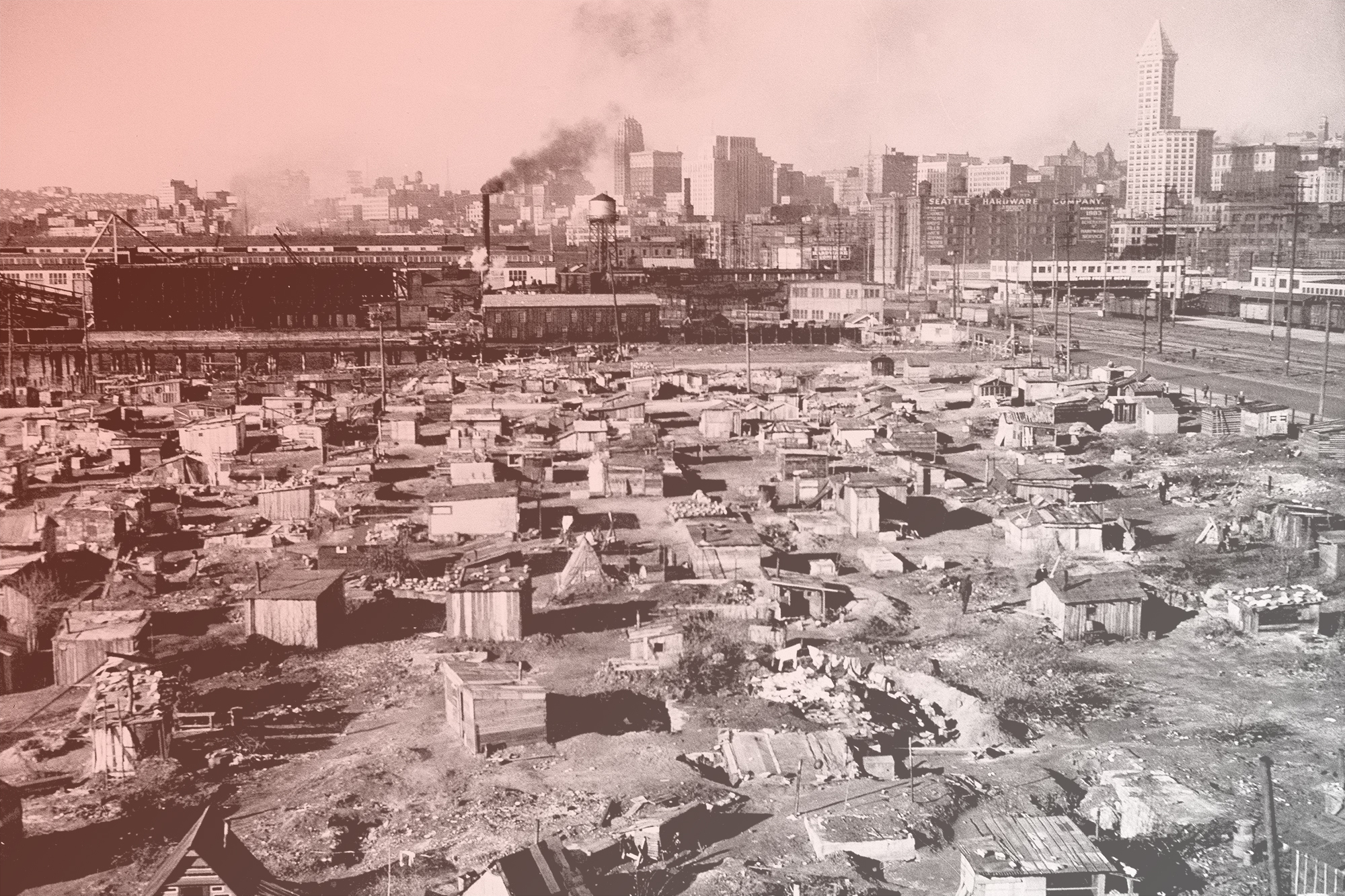 A "Hooverville," where shacks belonging to the unemployed and homeless line Seattle's waterfront south of Pioneer Square, March 20, 1933. (AP)

Two weeks ago, I wrote about Washington state’s unemployment crisis and the obstacles to economic recovery during a pandemic, and last week I laid out some ideas for state and local lawmakers. Even taking at face value the surprising drop in unemployment reported last Friday, we’re mired in joblessness at a scale unmatched since the Great Depression of the 1930s. This seems like a good moment to look back at that time for understanding and perhaps for inspiration. What happened to the out-of-work and downtrodden here in Seattle and Washington state? How did people survive, how did they organize and what did they accomplish?

When the stock market crashed in fall of 1929, the road from joblessness to homelessness was short. Meager local relief programs and private charity weren’t up to the challenge of mass unemployment. As the Depression deepened and President Herbert Hoover resolutely opposed federal involvement in relief efforts, “Hoovervilles” sprang up around the country. Seattle’s largest shanty town, on the tide flats south of Pioneer Square, began in 1931 and lasted a full decade, at times housing more than a thousand people. According to Hooverville’s unofficial mayor, the lumberjack Jesse Jackson, its inhabitants were mainly older men. They were tradesmen, “seamen, lumberjacks, fishermen and miners,” most of them foreign-born.

This is the third in a three-part series on unemployment from Crosscut Opinion. Read part I and part II.

At first the city tried to burn the camp down. But in 1932 a new administration decided to live and let live, establishing basic rules, including the election of a board of commissioners from among the residents to keep order. The camp was a “melting pot of races and nations,” Jackson explained, so they selected “two whites, two negroes, and two Filipinos” for the job. Women and children had to leave; only a dozen or so women hung on. Some men earned a little money fishing, collecting driftwood for fuel or selling salvaged waste. In the evening they crowded around radios to listen to President Roosevelt. Jackson’s mayoral duties were many and varied, from liaising with city authorities and nearby businesses to calling the doctor when someone fell ill. His 1938 account concludes: “A bunch of the fellows picked blackberries from Beacon Hill and I have made a lot of blackberry jelly.”

While Seattle’s homeless were hammering together shacks and fashioning wood-burning stoves from automobile gas tanks, leftists were busy figuring out how to organize the unemployed.

In most U.S. cities, says University of Washington professor James N. Gregory, “it was the Communist Party and the Unemployed Councils that were the most prominent organizers of unemployed politics.” But in Seattle, the group that gained traction was the homegrown Unemployed Citizens League, founded in summer 1931 by West Seattle socialists and labor activists associated with the Seattle Labor College.

Gregory directs an online collection of multimedia history projects called the Civil Rights and Labor History Consortium. Through essays, interviews, photographs, newspaper articles and other documents you can explore the history of the Great Depression in Washington state, strikes and the labor movement, the Communist movement, work on the waterfront and much more. All the stories in this column come from the project; I encourage you to dig in further yourself.

The Unemployed Citizens League was built around cooperative self-help. “Out of people’s garages and neighborhoods they would exchange services, and they worked out various deals with nearby farmers, particularly Japanese growers in the Bainbridge area and over on the Eastside, to harvest crops that would otherwise go to waste,” explains Gregory. “They would share some labor and be paid in food, which then would be distributed in the neighborhood.”

This fusion of mutual aid, political organizing, propaganda and education proved powerful; the Unemployed Citizens League soon boasted a membership in the tens of thousands. It played a major role in recalling one Seattle mayor in 1931 and electing another in 1932. It campaigned for a progressive income tax. For a time, it won the right to manage distribution of public relief through its own cooperative commissaries. And it inspired unemployed organizing in other cities.

The Unemployed Citizens League began to fade, says Gregory, “once Roosevelt took office in 1933 and the New Deal jobs and funding started to flow into the state.” With momentum waning, internal strife between Communists and socialists came to the fore. The locus of effective radical action shifted in the middle years of the decade, which saw the rise of the Washington Commonwealth Federation — “kind of a left-wing caucus in the Democratic Party” — and a new, massive wave of worker strikes and unionization. (That’s a story for another column.) But, says Gregory, the Unemployed Citizens League “was the foundation for all of that. All those people, thousands of people, moved through the UCL. Even if they didn’t stay members for very long, they had still experienced this, and they read the little newspaper The Vanguard, and it helped to politicize and revive a larger left that then would be very effective in this state.”