Is the COVID-19 recession a prelude to major economic collapse?

Extreme financial risk-taking, combined with the effects of the pandemic, may spell disaster for the U.S. economy. 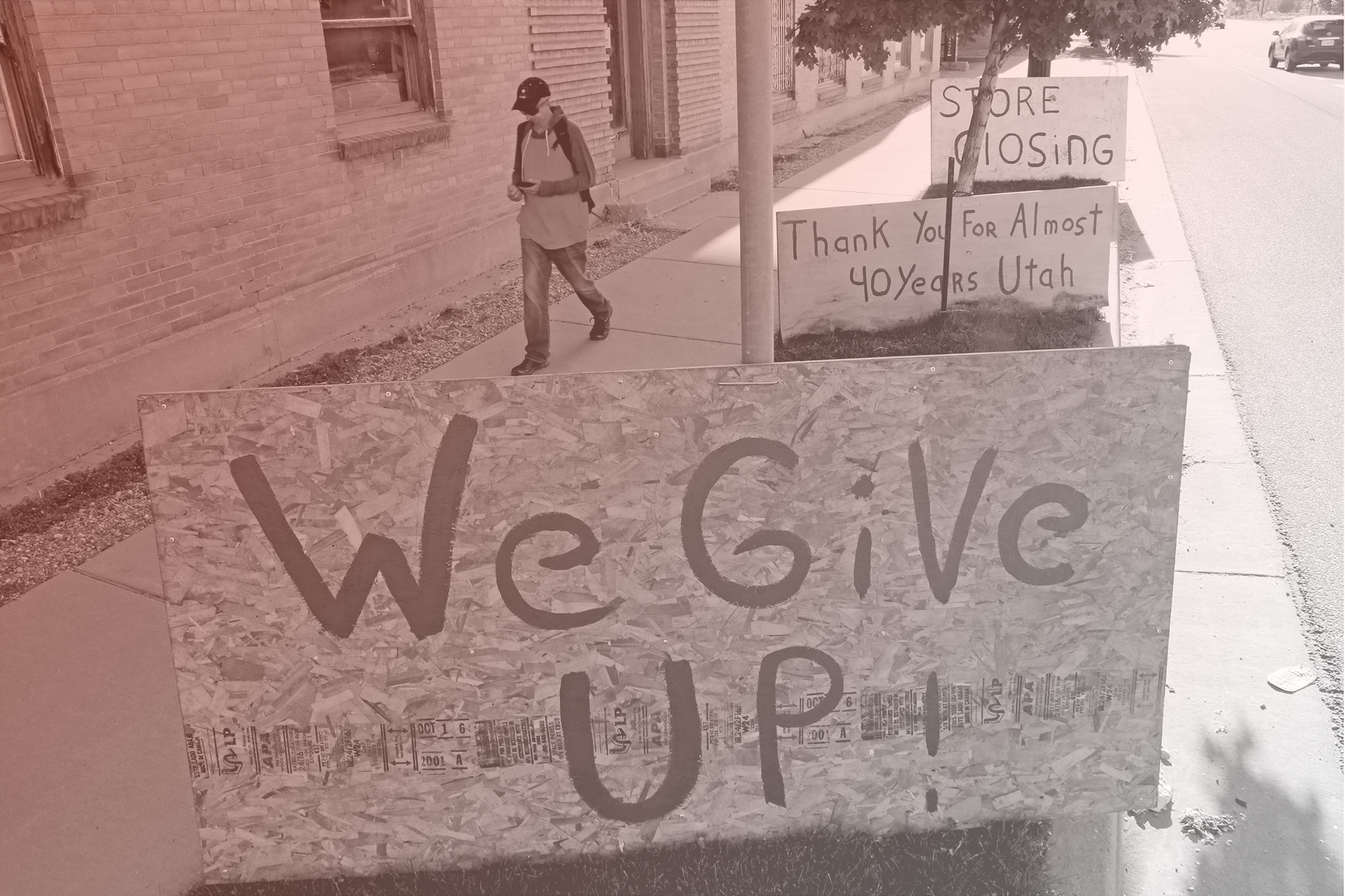 A man walks past a "we give up" sign outside Euro Treasures Antiques, May 8, 2020, in Salt Lake City, Utah. Scott Evans is closing his art and antique store after 40 years. This year started out well for his business, then COVID-19 hit and brought a drastic drop in customers. Evans says it was no longer cost-effective to stay open. (Rick Bowmer/AP)

As coronavirus cases surge around the country, enhanced unemployment benefits and eviction moratoriums threaten to expire, and the school year and flu season approach, questions multiply. Will “reopenings” have to be rolled back? Will there be more federal stimulus and relief? How will workers and businesses cope?

But the coronavirus isn’t the only source of uncertainty about our economic future. Doubts about the underlying health of the economy raise another worry, namely that the COVID-19 recession could stir up deeper financial troubles.

This is part three in a four-part series on coronavirus and capitalism publishing throughout July. Read part one, part two and part four.

Last week, I dusted off two hypotheses of economic doom and gloom put forward in the wake of the Great Recession: William Robinson’s 2010 argument that capitalism, now truly global, had entered a new period of “structural crisis”; and Larry Summers’ 2013 diagnosis that the weak recovery following the 2008 financial crisis reflected a chronic condition of “secular stagnation.” But all that was eons ago in 21st century political terms. How do those ideas hold up in 2020?

At first blush, these notions appeared to be contradicted by fairly steady, if still rather slow, growth in the U.S. and globally in the past few years. By the middle of 2018, our nation was enjoying the longest economic expansion in its history. In 2019, by some measures, the economy had never been better. The stock market hit all-time highs; in many states, including Washington, official unemployment hit all-time lows.

But a closer look reveals signs that not all was well. For one thing, the Federal Reserve didn’t raise interest rates above essentially zero until the end of 2015, and then only gradually, up to a peak of about 2.5% in 2019. That was less than half the 2007 peak, which in turn was lower than the peak preceding the 2001 recession. A rock-bottom federal funds interest rate is the monetary equivalent of keeping a foot pressed down hard on the accelerator. It’s the government saying to the private sector: Please borrow! Please invest!

It wasn’t only continued monetary stimulus that buttressed the apparent recovery. With Trump’s election, after years of painful austerity, Republicans in Congress were suddenly willing to resume fiscal stimulus, too. Together, the Tax Cuts and Jobs Act and the Bipartisan Budget Act of 2018 raised the federal budget deficit by about 1.4% of GDP in that year. The New Yorker’s John Cassidy reports that, though rarely discussed as such, this one-two punch of tax cuts (albeit mostly for corporations and the rich) and increased government spending was “the biggest stimulus that any administration has introduced outside of a recession since the Second World War,” according to economists at Deutsche Bank Securities.

In other words, it required aggressive government prodding to achieve a merely acceptable hustle and bustle of economic activity. Not only that, long-term global growth projections — almost always overly optimistic — had turned downright sluggish. By mid-2019, some saw vindication for Summers’ view that the economy was suffering from a long-term slowdown in investment.

Was growth once again, as before the Great Recession, being propped up by speculation that would eventually come crashing down? Were the profits of today sustained only by peddling deluded hopes about the profits of tomorrow? By late 2019, some observers began warning of a rising mountain of corporate debt. Much of this debt was high-risk, corresponding to “leveraged loans,” or loans to troubled businesses. More worrying still, it was being chopped up, repackaged and sold off in securities called collateralized loan obligations (CLOs). If this sounded a lot like the collateralized debt obligations, composed of subprime mortgages, that played a starring role in the housing bubble that burst in 2008, that was no coincidence.

Why would anyone buy bad debt? Or, more to the point, how was low-rated debt transfigured into AAA-rated CLOs considered safe enough for major banks to hold on their balance sheets? The rationale was the same as it had been with subprime mortgages. The risk of eventual default on any given loan might be significant, but blend them all together and it becomes highly unlikely that many of them will fail at the same time — at least under normal circumstances.

The pandemic is creating precisely the conditions under which a mass wave of defaults on leveraged loans is possible. In a recent piece in The Atlantic, Berkeley law professor Frank Partnoy laid out an unsettling worst-case scenario: Sometime in the next year or so, as the impacts of the pandemic really sink in, business failures will multiply and CLO prices will drop precipitously, spiraling into bank failures. From there we will fall into a full-blown financial collapse, with no obvious way out.

No one can say for sure whether this bleak series of events will come to pass, and not everyone shares Partnoy’s sense of alarm. But regardless of the details, there are good reasons to take the “secular stagnation” and “structural crisis” theses seriously. Extreme financial risk-taking has continued, in a variety of forms, since the Great Recession, and it’s not just due to the failure of governments to impose adequate regulations; it’s also a product of more fundamental problems, including persistently lackluster growth in the real economy.

All this raises the question: What can be done?

Among thinkers who see today’s economy as in some way deeply off-kilter, even if they don’t entirely agree on the diagnosis, there’s a fair amount of overlap when it comes to the prescribed cure. In 2010, Robinson discussed prospects for a “new New Deal” and a radical redistribution of wealth. In 2013, Summers called for a new era of massive public investment, creating good jobs and boosting growth by rebuilding the nation’s infrastructure. Then there’s Thomas Piketty, whose 2013 book Capital in the 21st Century analyzed the ever-growing global concentration and inequality of wealth in our times. Among other things, Piketty calls for a progressive global wealth tax.

All of this sounds very good to the progressive-left ear. But is it realistic? And who’s going to make it happen? That’s our subject for next week.