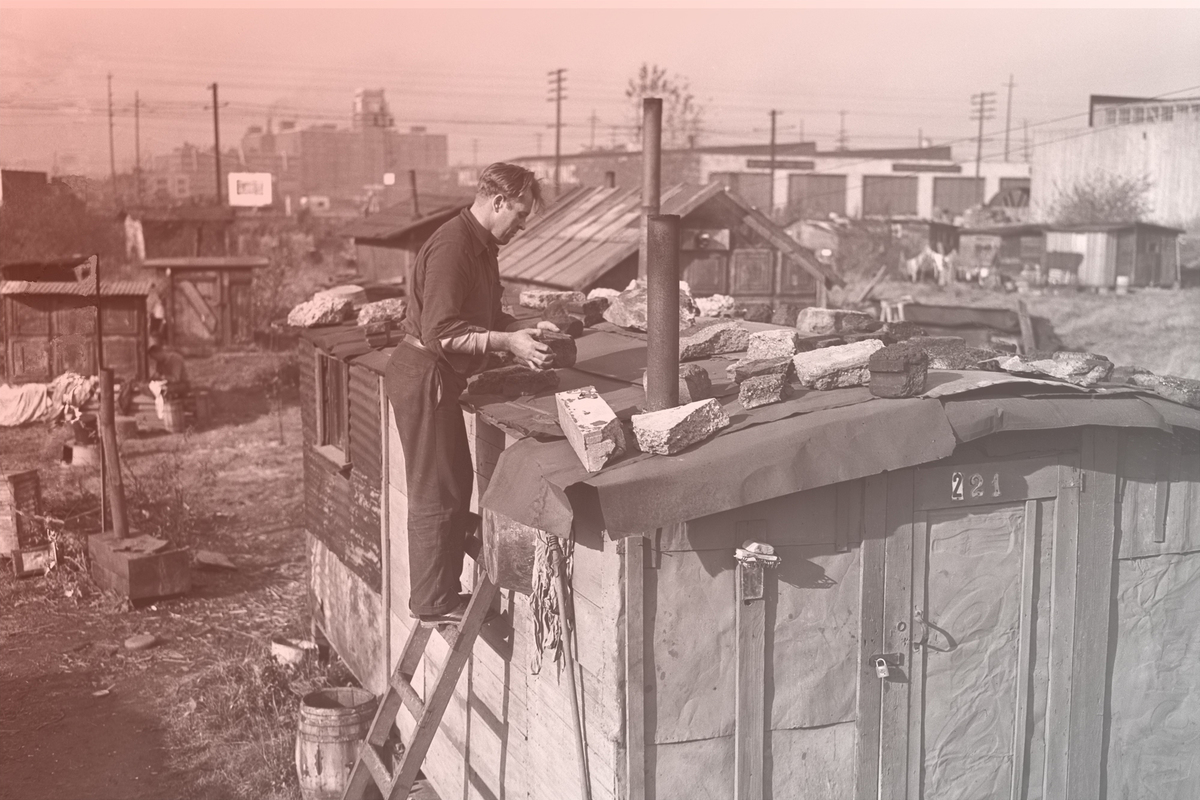 Edwin Hill repairing roof of shack in Hooverville, Seattle, November 1939, with tarpaper weighted down with chunks of cement. Katie Wilson writes that one can view today’s economic crisis as loosely analogous to the Great Depression of the 1930s, but with a crucial difference: This time capitalism has nowhere left to go, writes Katie Wilson. (Seattle Post-Intelligencer via MOHAI)

Over three previous columns, I’ve explored the idea that our COVID-19 recession could take a turn for the worse, not because of the pandemic per se, but because 21st century global capitalism has what you might call a preexisting condition. The precise diagnosis differs depending on whom you ask, but the symptoms include sluggish economic growth and rising inequality. Some of the proposed remedies have included a new era of ambitious public investment and a massive downward redistribution of wealth.

But will we take the medicine, and will it save the patient? Fasten your seatbelt, because we’re about to take a whirlwind tour of a very big question: Can capitalism survive?

This is the final column in a four-part series on coronavirus and capitalism. Read part one, part two, and part three.

The first challenge is political. To people on the progressive end of the political spectrum, taxing the rich and expanding the public sector are not hard pills to swallow. But in case you haven’t noticed, we often don’t get what we want. The economic elites who have amassed so much of society’s wealth and political power have a different agenda.

But suppose it became widely accepted that such reforms were necessary to escape a bleak future of stagnation, economic crisis and social upheaval. Even then, could the powers that be impose this kind of discipline on themselves? Could they put aside their short-term and particular interests for the longer-term and collective good, not only at a national, but at a global, scale? Their track record on the climate crisis, an existential threat as solidly supported by a scientific consensus as one could ask for, isn’t promising. The ruling class hasn’t exactly perfected the art of governing itself, and seems to be getting worse at governing the rest of us.

Still, history gives us a promising precedent: the 1930s and the “New Deal” of President Franklin D. Roosevelt. Public works projects, progressive income and corporate taxes, Social Security and unemployment relief, labor regulations and financial reforms — all helped to pull capitalism out of the structural crisis of the Great Depression. But these reforms were not merely handed down from above; they were achieved through immense pressure from popular and working-class movements. If 21st century progressive and left movements can grow to a similar scale and strength, perhaps such changes can again be forced from below.

Let’s suppose it all happens again, this time on a global scale. In the next decade or two or three, the political will is mustered. Sweeping reforms occur: a global tax on wealth, a global “Green New Deal” and global regulations to curb excessive financial risk-taking. Will it be enough to revive flagging economic growth and usher in a new era of capitalist prosperity?

Extending our Great Depression analogy further, there are reasons for doubt. New Deal reforms were far from wholly responsible for rescuing capitalism from crisis almost a century ago. The period of worldwide economic expansion in the wake of the Second World War also depended on there being — to put it simply — ample room to grow. There was so much to do: rebuild from the wartime devastation, invest in the new consumer and service economies of the industrialized nations. Moreover, this growth was fueled by the accelerating production of primary commodities — food, fuels, raw materials — in “developing” nations. There’s a strong argument to be made that the postwar prosperity enjoyed by the new “middle classes” of the United States and Europe rested on this asymmetrical relation to their former colonies.

Today, as much as global inequalities of wealth and development remain, we live in a very different world. Decades of globalization have gone a long way toward industrializing the formerly “developing” world and leveling global labor markets. Our lives today are saturated with products that promise to satisfy every conceivable need or desire — even if we can’t all afford to partake. One can view today’s economic crisis as analogous, in a loose sense, to the crisis of the 1930s, but with a crucial difference: This time capitalism has nowhere left to go. Global wealth redistribution and public investment might help to boost demand for a while, but they can’t satisfy the economic imperative of endless growth in a finite world.

That, in broad strokes, is one argument for the notion that capitalism is doomed. But there are a few big assumptions involved here: first, that capitalism requires endless economic growth; second, that this growth entails continually increasing inputs of human labor, natural resources and energy, and can’t be elevated entirely to some more metaphysical, metaphorical plane; and third, that we’re not about to lift off into space, à la Jeff Bezos, liberating ourselves from a future of stagnation and boredom by mining asteroids and propagating the human race in vast, rotating cylinders.

The third assumption is probably the least controversial. As the climate crisis looms ever larger in the public consciousness, there is growing attention to what constraints our little planet places on the global economy of tomorrow. In 2012, for example, the English economist Kate Raworth introduced a model called “doughnut economics.” She conceptualizes a desirable future as existing somewhere between an “ecological ceiling” (the doughnut’s outer ring), beyond which natural limits are transgressed, and a “social foundation” (the doughnut’s inner ring) beneath which human needs are unmet. It’s a useful guide for policymakers in pursuit of sustainable development.

But can capitalism fit inside the doughnut? Can some variation on our current mode of wealth production and distribution continue, indefinitely, within the ecological limits of our planet? That’s the $86 trillion question. Is “post-growth” or “degrowth” capitalism possible? And if not, how about truly “green growth,” absolutely decoupled from rising carbon emissions, unsustainable resource extraction and other harmful environmental impacts? And if that’s not possible, what then? There’s a growing debate about all this, too — though the discussion is somewhat quarantined, so to speak, and has not penetrated as far into the world of mainstream economics as you might hope, given its momentous and urgent implications for the future of human society and life on Earth.

Maybe we shouldn’t be surprised. Insofar as the function of economics is to legitimate and guide the system we have, as well as to understand it, it’s too much to expect the discipline as a whole to face squarely the possibility of unresolvable systemic crisis. The future of capitalism, or the shape of its supersession, will be discovered as much through struggle as through science.

Editor's note: Want to learn more about this series and how it came to be? Katie Wilson will be writing about it this weekend in our weekly newsletter. You can subscribe here to receive it every Sunday.