The perils of ‘helpful’ white people shaken by police violence

The police shooting of Jacob Blake is the latest to inspire white Americans to protest and demand change. Here's my advice. 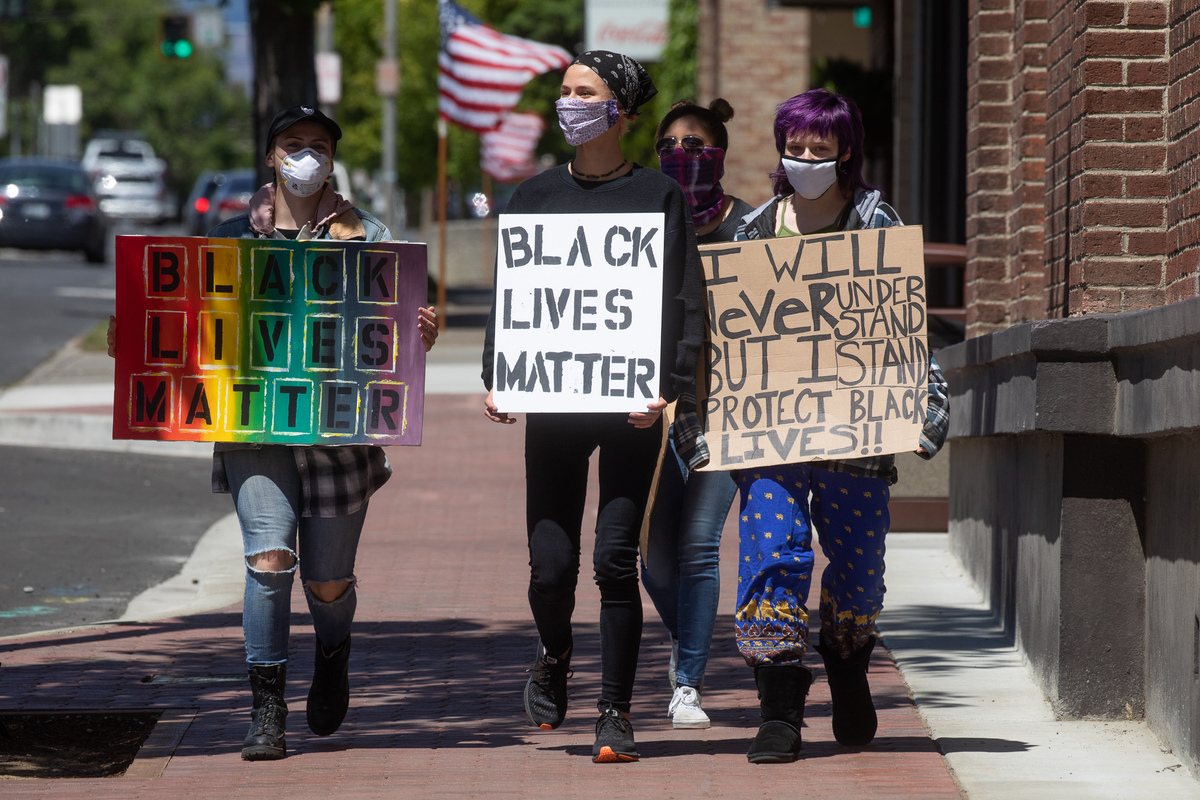 Imagine you’ve been in a really bad car accident. You’ve managed to get out of your crumpled car, but have collapsed nearby. People come running to help. You are screaming in pain. One person reaches down and grabs you by the shoulders to drag you farther away from the car. Another grabs your legs to carry you. A third person comes up screaming at the other two and tells them to put you down. They brush the third one aside and keep trying to move you. They’re helping. The problem: They have no idea what’s wrong with you. Do you have a broken leg? Did you damage ribs? Is there damage to your spine or neck? Did you have a medical problem, like a stroke, that caused the accident? Without knowing the answers to some of these questions, bystanders can do more harm than good.

In the weeks since the killing of George Floyd by Minneapolis police officer Derek Chauvin, and now the shooting of Jacob Blake by Kenosha police officer Rusten Sheskey, millions of people, the majority of them white, have taken to the streets of large towns and small in protest. They are witnessing the pain of trauma and leaving the safety of their own lives to bear witness to injustice.

Many of those individuals have never participated in transformation and are asking what to do next. Simultaneously, I’ve received countless calls, texts and emails from Black, Indigenous and people of color (BIPOC) activists asking for counsel on how to deal with white people who are overstepping boundaries. Here, in the first in a series of articles, is my guidance for white people determined to change the structures enabling nationwide violence against BIPOC, specifically against those who are Black.

The first step in any emergency is to deal with whatever is imminently life threatening and then STOP. Stop to assess before taking any further steps. Marches and protests are intended to create that societywide stoppage and send a signal that something is very wrong.

In any trauma, the person screaming in pain gets to say what’s appropriate or not. If they say, “I’m fine, I can get up on my own,” stand nearby to be sure they won’t need additional help, assure them you’ll be close in case they do need you, then let them stand on their own. If they say, “Stop! That hurts,” then do what they say. Turn your attention to diverting traffic around them or ask if you could call a friend or loved one for them. Take your direction from them. Even if you are a medical professional, the person in pain gets to make the decision about what will be done to their body.

This step seems the most difficult for white people who want to “help” people of color. Often, white people arrive on the scene of Black trauma and immediately move into action mode. Instead of asking, “How can I help?” and following through, these white people declare, “Here’s what I’m going to do,” and become offended when told that’s not what’s needed. More often than not, be it the local mom’s group, microlocal protest groups, even in the protest zone formerly known as CHOP, Black organizers end up being distracted in the midst of furthering their own work to clean up the mess these self-proclaimed allies create.

Well-intentioned white people trying to help also seem to believe all their ideas are inherently good and should immediately be acted upon. They often don’t realize how deeply those ideas are rooted in white supremacy.

When the Gates Foundation decided to start working in African countries, it marched in without consulting indigenous communities. In the Netflix film about Bill Gates, his wife, Melinda, acknowledges it took them 10 years to realize their methods weren’t working because they hadn’t taken the time to consult with people who understood the cultures and communities they intended to impact. There were many who tried to tell them, but they were sure of their “expertise” and tried to impose it by using methods they had seen succeed in the U.S.

It didn’t occur to them to explore whether their notion of effective methodology had been formed by lifelong immersion in a society that demonizes everything outside British or European culture. Equating “dark” to evil throughout literature, ascribing “classical” only to European music, creating a Eurocentric mental description of the American girl next door, using the term American as a presumptive description of only one country of the three regions that bear that name all subtly inculcate us to systemized white supremacist notions. Even our local, supposedly public, television stations inundate us with sanitized versions of British culture for hours each day, exploring the multitudes of cultures within our own society only in documentary format or as exotic others.

The notion of white cultural supremacy is infused into the mental and emotional stream of development of every person in this society. The majority of BIPOC see through that notion when their lived experience produces cognitive dissonance they can’t ignore. While white people insist Black parents don’t care about their children’s education, we know how hard our ancestors fought for the right to education and how hard Black parents work today to get equal access to educational resources for our children. We see how a film about mean white girls is accepted as a comedy, knowing all too well that Black girls in the same story would be portrayed as a violent gang. We see how armed white men standing on the steps of our state’s Capitol building calling for government overthrow do so without disruption, while unarmed Black Lives Matter protesters in Seattle are tear gassed and, in some cases, beaten. We wonder how many of the students caught selling drugs on Mercer Island or Bainbridge Island ended up serving any jail time, while we desperately try to create new lives for young men and women in our communities who have given up years of their childhood for the same crimes.

White people, especially here in the Northwest, where they are numerically dominant and seldom have cause for genuine, deep, sustained interaction with BIPOC cultures, never experience that dissonance. If they did, they would see through the mythologies and stereotypes they have ingested all their lives. Those beliefs give birth to “helpful ideas” that are useless at best, and often harmful because they are based on reinforcing white supremacist cultural norms.

Racist systems have a history of picking and choosing who they will anoint as leaders of oppressed communities, funneling resources to those individuals or organizations, then declaring disappointment when the programs are ineffective or corrupted. For example, funding organizations insisting that potential recipients have 501(c)(3) nonprofit status, a board of directors and a formal structure, often don’t consider Indigenous, African or other POC communities, where decisions are made in community or by a circle of elders. They often end up funding groups or projects that have the savvy or experience to properly fill out their paperwork, but have no deep ties to community. Then, when those projects fail, rather than seeing how their own funding processes contribute to the failure, they blame the communities or the corruption of individuals, contributing to a narrative that BIPOC communities don’t have the skills necessary to be successful.

Those beliefs also lead white people to rely on BIPOC, like myself, who have lived or been educated long enough in the midst of white culture to understand its ins and outs. We are called on to interpret other BIPOC actions or words. We are invited to sit on panels, serve on prestigious boards as token representatives of BIPOC and endorse politicians and programs. Some of us, not all, work to ensure our actions are rooted in community input and feedback and measure our success by support from and impact on community. Others measure success by impact on their resume or bottom line. Projects that fail or become unsustainable are generally born from the latter. Community accountability is difficult, painful, contentious work, but it ensures sustainability over the long term. It also challenges what are “normal” or “acceptable” procedures, expectations or outcomes. White people use their discomfort with BIPOC cultural norms to dismiss the long-term, sustainable solutions.

White people who “help” also immediately soak up the limited attention span of mainstream media, leaving no space for BIPOC. The white founder of a well-endowed arts organization once called to ask for my support. She and her board had decided to start a branch of their organization in the Rainier Valley. I’m sure she was quite shocked when I told her I would not only not support the move, but would actively stand against it. I asked why they chose to bring in their own organization instead of learning about and supporting one or more existing arts organizations in the Rainer Valley struggling to find resources. No one in the Rainier Valley asked them to set up a program, and they had neither the staff nor the cultural competence to do it effectively. Instead of putting a spotlight on the arts programs working with little to no resources, once they opened their own facility the media attention would move to them, as would funding from foundations and other granting bodies. Local programs wouldn’t be able to compete.

When white people fail to earn support from BIPOC organizers or communities, they often whine publicly about how hard they tried. Returning to our analogy, this is the equivalent of the person who tried to move the injured accident victim going on camera to say how hurt they are because the victim yelled at them.

If you’re sincerely committed to defeating the systemic forces that oppress BIPOC, thanks for participating in protests and standing for justice. Next, stop doing and listen to those dealing with the daily trauma of racism. The next article will address what you can do.