The winning basketball team is a model for sustained and creative political engagement. Will Seattleites follow the players' lead? 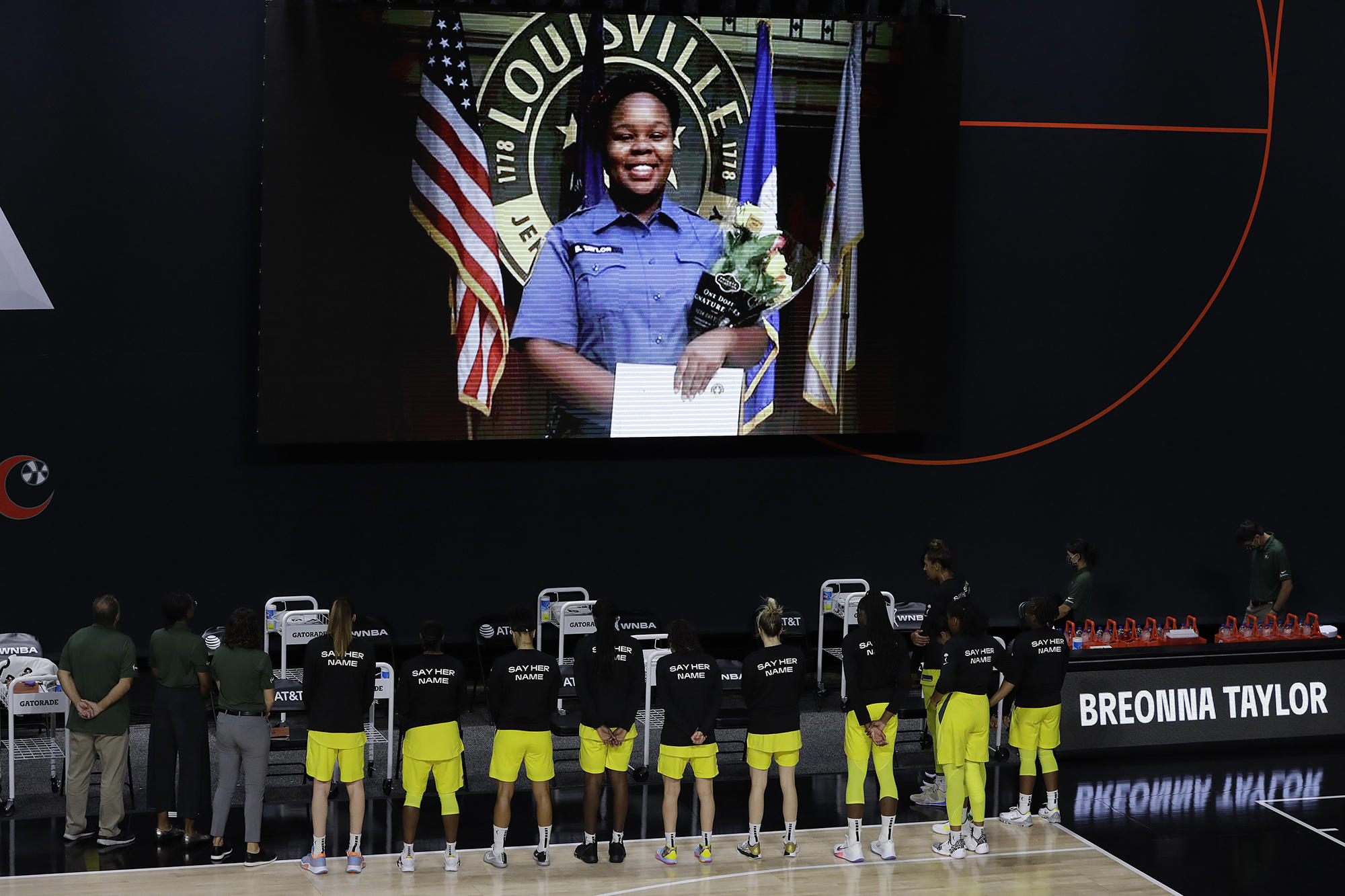 Members of the Seattle Storm stand in front of a photo of Breonna Taylor before a WNBA basketball game against the Washington Mystics, July 30, 2020, in Bradenton, Florida. Taylor was killed in her home by police officers. (Chris O'Meara/AP)

Protests against police brutality put Seattle in the national spotlight this summer.

But if you want a model for how our city can stay in the conversation going forward, look no further than our most dominant professional sports team: the Seattle Storm.

Of course, these incredible athletes aren’t here in Seattle right now; they’re quarantined at the IMG Academy in Bradenton, Florida, competing in a condensed 2020 WNBA season — and so far, they’re crushing it. As of this writing, they’re at the top of the league with a 7-1 record. Star forward Breanna Stewart is somehow looking more agile than ever after rupturing her Achilles tendon in 2019. And although it’s hard for me to knock on wood and type simultaneously, I have to make the prediction: When the Storm come back home later this year, they’re going to bring their fourth championship trophy with them.

But it’s not merely athletic prowess that should make the Storm local heroes. More importantly, they are using their platforms — and their increased national TV airtime — to draw attention to police killings, voice support for Black Lives Matter and influence a U.S. Senate race. The Storm are what Seattle can be at its best: politically-engaged on a national level, not siloed in our bubble, so focused on important local issues that we forget we’re a major American city, too. Through their advocacy — and, yes, their jump shots — the Storm are offering a compelling answer to a question many Seattleites are asking: What comes next?

Inevitably, the protests sparked by the police killing of George Floyd were going to cool off as time wore on. That initial flurry of activity was about capturing public attention, clarifying demands and putting pressure on local leaders. But even though the appearance of federal agents in Portland have led to more Seattle protests, the hard truth is this: We were always going to have to figure out how to maintain that level of political engagement not just on the asphalt but across all areas of our lives.

When the Storm went back to work in late July, they showed us how to do precisely that. Breanna Stewart and New York Liberty player Layshia Clarendon dedicated the 2020 WNBA season to Breonna Taylor, vowing to “be a voice to the voiceless,” and then led both teams in a moment of silence for the 26-year-old who was killed by Louisville police. It’s relevant to note that both players went on to play at the peak of their game: Clarendon scored 20 points and Stewart showed us she is still just as good as she was in 2018, scoring 18 points and bringing down eight rebounds.

But when ESPN’s Holly Rowe secured a postgame interview with Stewart, the returning MVP said not a word about her performance, instead choosing to keep the focus on combating racism.

“We’re going to have solidarity and strength in numbers and continue and fight to create change,” Stewart told Rowe.

For the Storm, the court is a workplace, albeit a unique one that gives their words and actions more reach. Still, the team offers everyday Seattleites a lesson: As we enter some kind of new normal amid the plateauing pandemic, we can either treat the summer of 2020 as a blip — a flare-up of long-held tensions — or we can carry it with us as an ongoing commitment to ending injustice. The Storm, like many athletes and celebrities, spoke out in June. On Instagram, Alysha Clark decried “the dangerous intersection of gun violence and racism in America.” Three-point specialist Sami Whitcomb posted about the privilege she has as a white woman in choosing to speak out about racism, instead of having to endure it daily. Jewell Loyd delivered moving public remarks about her father being relieved to see his kids live past 25.

“My advice is to keep talking about it,” Loyd continued. “It’s going to be uncomfortable. A lot of things are uncomfortable. We’re athletes and we put our bodies in a lot of uncomfortable situations and that’s how we become champions.”

The Storm have indeed continued to talk about it beyond June — and in so doing, they are demonstrating the importance of taking concrete action, keeping your messaging fresh and staying in the conversation. Two weeks ago, as The Seattle Times reported, local legend Sue Bird came up with the idea for WNBA players to wear black T-shirts bearing the slogan “Vote Warnock”— a show of opposition to Atlanta Dream co-owner Kelly Loeffler, who is also a Republican U.S. senator from Georgia. Loeffler had written a letter to WNBA Commissioner Cathy Engelbert denouncing the decision to focus the 2020 season on Black Lives Matter. The Rev. Raphael Warnock is a Democrat challenging Loeffler in 2020.

The shirts inspired a fresh round of national media coverage, just as the attention from the league’s opening weekend was beginning to fade. That’s the genius of Bird and the many WNBA players who reportedly coordinated with her on the creation of the “Vote Warnock” shirts: They know that being bold and outspoken is how you keep the spotlight. And they know that once the public becomes acclimated to a slogan, once the press starts to look the other way, you have to switch things up while still remaining true to your principles. Swapping out your “Black Lives Matter” tee for a “Vote Warnock” tee isn’t abandoning your original message; it’s clarifying it, focusing it on a specific action people can take to defend the value of Black life. Bird told ESPN that she’s “not some political strategist,” but perhaps being an athlete is enough to understand that principle: Anyone who has even played a pickup game at the park knows that once you’re becoming too predictable for your defender, you have to find a new lane to the same basket.

That tactic should inspire every Seattleite to ask: What’s your “Vote Warnock”? What’s your concrete action you can focus on this fall, as the sunshine starts to fade and the streets empty out even more? What’s something you can do — whether at work, in your personal life or in your sphere of political influence — to stay engaged instead of falling back into complacency? What can you do, here, in Seattle?

I have long been impressed by the Storm. Even before the current moment, these women have been committed to speaking out on racism, equal pay and LGBTQ equality. They give their all on the court, play overseas in the off season and still somehow find time to mentor young women and model political engagement on a national scale. In a “normal” summer, I would be in the bleachers at every home game, cheering on every Jordin Canada reverse layup and every Natasha Howard rebound. This summer, I’m going to have to settle for watching them from afar as they (we hope) win it all, but I’m also going to be paying close attention to their political actions, too, and taking notes.

Interim Storm head coach Gary Kloppenburg said recently his players — and indeed all of the players in the WNBA — represent “the political conscience of America — Black women — and I think they’re leading.” The Storm are charting a way forward, showing Seattle how to keep the intensity around inequality high, even as more normal routines reassert themselves. Jordin Canada told ESPN recently that the players are “more than athletes.” She’s right. They’re path makers, too. The question is: Will we follow?