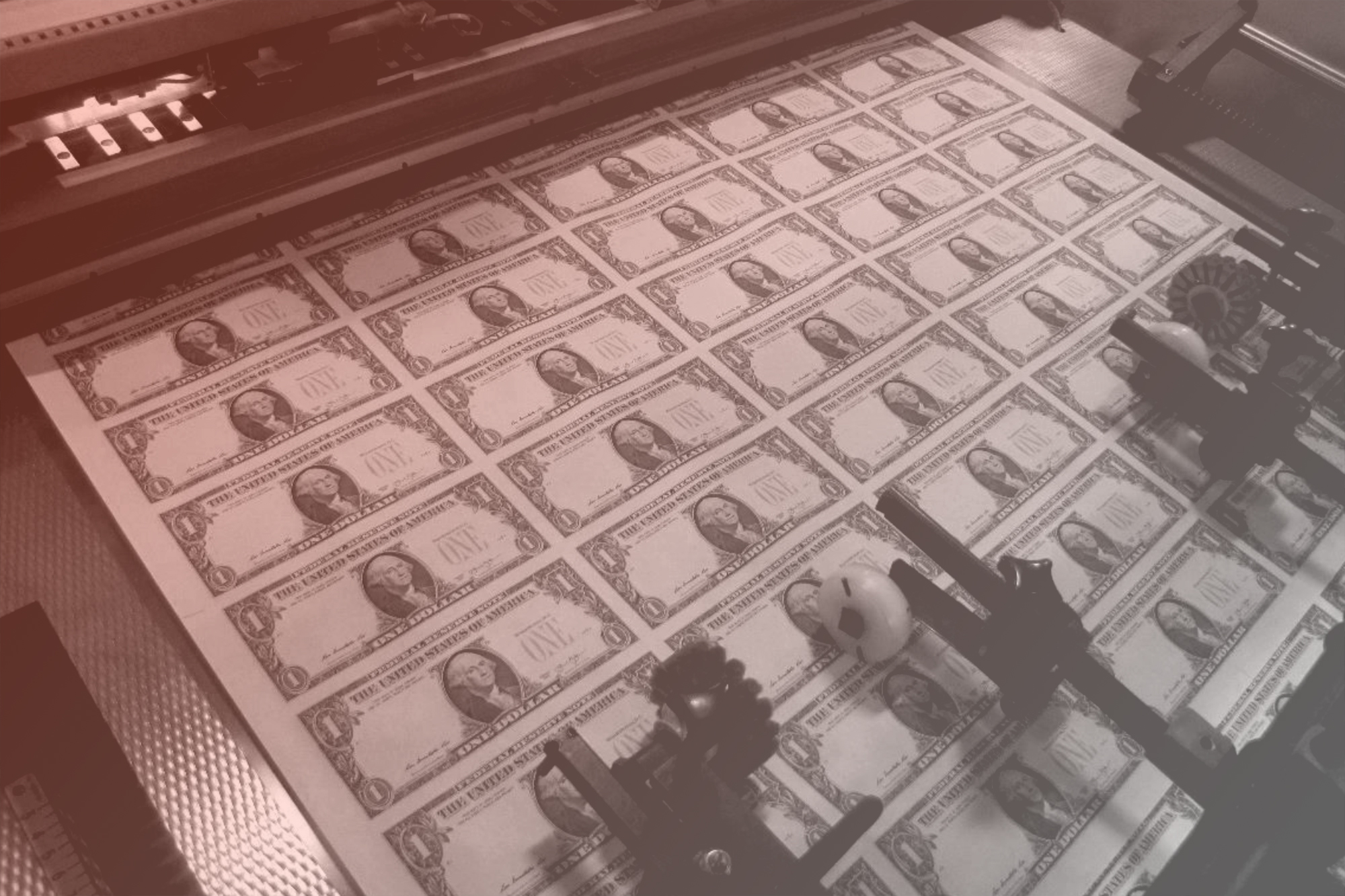 Universal basic income became a hot topic of debate during the 2020 primary election. As the pandemic stretches on, some are revisting the idea. (Bureau of Engraving and Printing)

I have a question for Mayor Durkan. When do we start getting our free money?

On June 29, 11 U.S. mayors, led by Michael Tubbs of Stockton, California, announced the launch of a new network called Mayors for a Guaranteed Income. The basic idea of a guaranteed income is simple: Give people cash, not just once, but regularly, with no strings attached. The mayors intend to experiment with city-based pilot programs, as well as advocate for state and federal guaranteed income policies. The effort quickly got a $3 million boost from Twitter CEO Jack Dorsey.

In July, five more mayors joined the club — including, I was surprised to learn, Seattle Mayor Jenny Durkan. That seems like it could put us in line for a guaranteed income pilot, but, strangely, none of this made a blip in the local news. At least Tacoma Mayor Victoria Woodards, also a member, talked up the idea on KIRO Radio. All we got was a vague tweet. Perhaps, with Durkan and the Seattle City Council at loggerheads over taxing big business and defunding the police, July was too jam-packed with political drama for anyone to pay attention. But inquiring minds want to know: What’s the plan?

This is the first column in a three-part series on guaranteed income. Read part II and part III.

If we do get a guaranteed income pilot here in Seattle, it won’t be the first time. Seattle, along with Denver, was home to the largest of several “negative income tax” experiments conducted in the U.S. during the 1970s. The Seattle-Denver Income Maintenance Experiment made cash payments to 4,800 low-income households over a period of three or five years. A family of four with no other income received the annual equivalent of about $24,000 to $34,000 in today’s dollars. Any income from work gradually dialed down the payments, such that, for example, a family earning $24,000 might receive a supplement of only half that amount, and if their job income doubled, they might get nothing at all.

There are many interesting questions to ask about a scheme like this and many ways it might impact a family’s quality of life, relationships, decisions and future trajectory. But, consistent with our society’s enduring obsession with the virtue of work, the question that most occupied researchers and policymakers at the time concerned participants’ “work-effort response.” If you give people free money, won’t they just lie about on the couch all day?

The short answer is no. The Seattle-Denver experiment found a moderate reduction in annual work hours compared with a control group — averaging 9% for husbands, 20% for wives and 14% for single mothers — though later analysis contested the strength of this effect. Critics saw this as reason to reject a guaranteed income out of hand. However, it’s not at all clear that this reduction is a bad thing. Much of it corresponded to people taking more time between jobs, presumably because they were no longer forced by desperate need to accept the first option that came their way. And women likely devoted more hours to unpaid household and care work.

More recently, there have been quite a number of guaranteed income pilots around the world, from Finland to Namibia. Most, though not all, focus on the poor and provide payments that, while significant, are insufficient or barely sufficient to cover life’s essentials. As a whole, the empirical results are extremely promising. People tend to spend the money on necessities or, in the poorest countries, to start microbusinesses. Positive impacts include lower rates of domestic violence, higher school attendance, less juvenile crime, less drug and alcohol use, and fewer doctor visits and hospitalizations. People feel happier and less stressed.

The idea of a guaranteed income — along with its more ambitious cousin, universal basic income, which would go to all individuals regardless of other income or wealth — has a long history, including support from all over the political map. In the U.S., amid the ferment of the 1960s, it found champions in such unlikely allies as Milton Friedman and Martin Luther King Jr. In 1968, more than a thousand economists signed a letter urging Congress to pass a guaranteed minimum income. We came within a hair’s breadth of getting one, too. President Richard Nixon proposed a modest version in his Family Assistance Plan, which passed the House in 1970 and 1971 but died in the Senate. Instead, in 1975 we got an Earned Income Tax Credit, scaled and conditional upon income from paid work.

Forty years later, guaranteed income again bubbled up in the news, with several governments launching pilots and a Swiss campaign forcing a national referendum. The limp recovery from the Great Recession no doubt contributed to this revival of interest, along with growing fears that automation will lead to a permanent reduction in available jobs. Smartphone technology is also making it easier to send people money, enabling the largest basic income project to date, a 12-year study involving 20,000 people in Kenya, begun in 2016. Here in the U.S., Stockton’s Mayor Tubbs championed the idea, and early last year 125 low-income Stocktonians started receiving $500 a month, no strings attached.

Then, of course, Democratic presidential candidate Andrew Yang brought the idea of a universal basic income to the national debate stage, proposing a “Freedom Dividend” of $1,000 a month for every American adult. In Washington state, Sen. Joe Nguyen, D-West Seattle, introduced legislation in January to launch a basic income pilot that would give 500 adults $500 a month for 18 months. And now COVID-19, by making work impossible for so many, has heightened this new surge of interest and won over many skeptics. Which brings us back to the Mayors for a Guaranteed Income, and Durkan.

What are the prospects for a guaranteed income program here in Seattle, and what might it look like? Is it really a good idea, weighed against other possible uses of new or existing funds? Does having support from both left and right make the idea a political shoo-in, or dead on arrival? We’ll take a look next week.