As we debate the Supreme Court nominee, let’s remember: Many LGBTQ people are religious, and many religions have affirmed their rights. 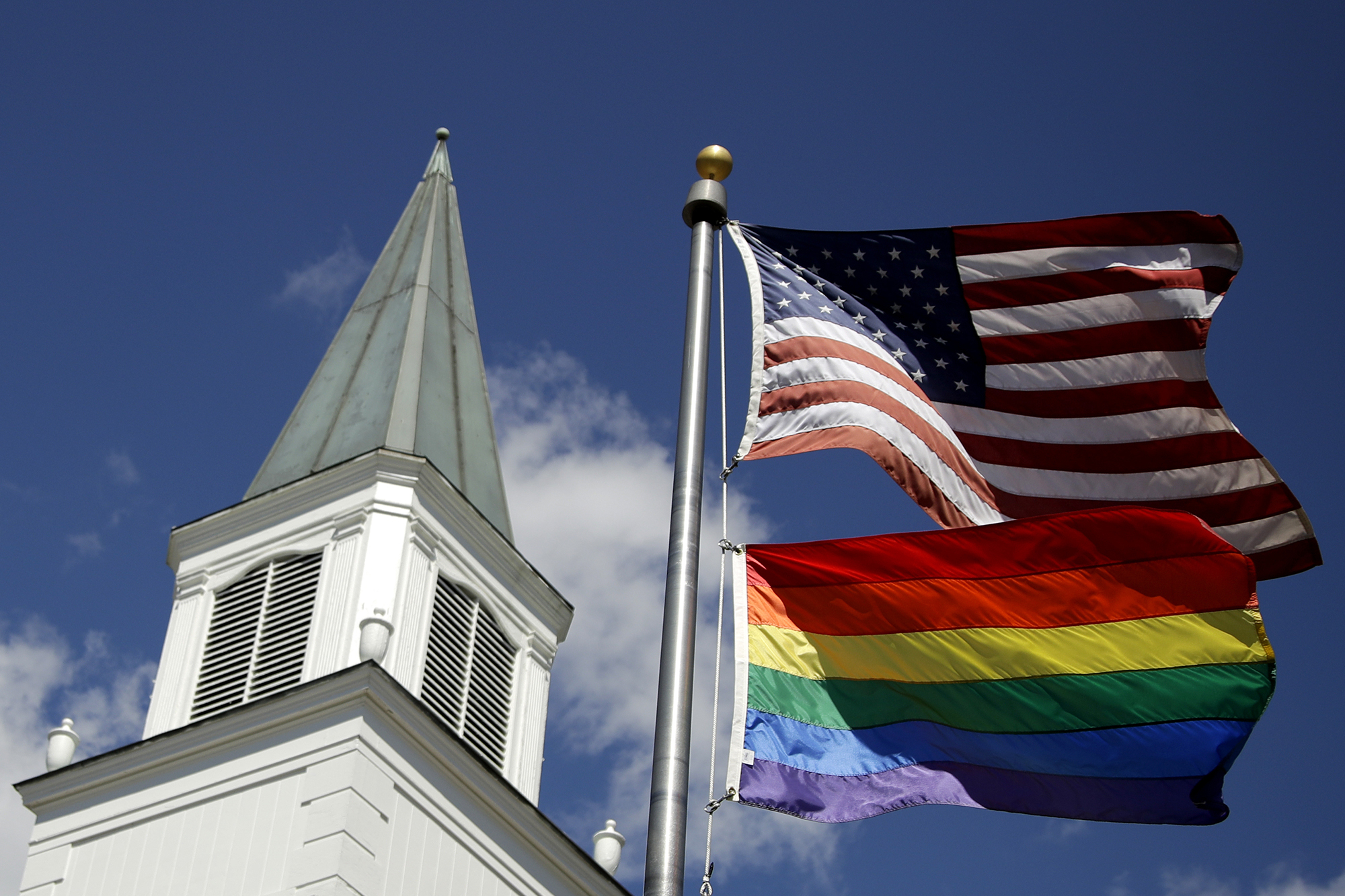 A Pride flag flies along with the U.S. flag in front of the Asbury United Methodist Church in Prairie Village, Kan. (Charlie Riedel/AP)

Brace yourself. Whenever LGBTQ rights are on the national stage — whether because of weddings, wedding cakes or Supreme Court vacancies — our public discourse suffers. This is a showdown between religious freedom and LGBTQ people, we are told, as though these are two completely separate and diametrically opposed forces locked in a winner-take-all battle.

That lazy framing emerged almost as soon as Ruth Bader Ginsburg passed away. A Washington Post headline declared that “a new conservative Supreme Court justice could boost religious rights at the cost of LGBTQ protections.” And there it was: “religious rights” were going to face off against “LGBTQ protections,” two rivals dusting off their boxing gloves once again. To be fair, the article’s analysis was quite astute, but the headline (as headlines so often do) flattened the issue into a false binary.

With President Donald Trump’s nomination of Amy Coney Barrett to fill Ginsburg’s seat, it’s only going to get worse from here. Why? Because Barrett is a devout Catholic — and she has a record that prompted the Human Rights Campaign to label her an “absolute threat to LGBTQ rights.” These two facts together almost beg for lazy punditry: Some on the left will want to blame Barrett’s record on her religion, as though Catholicism necessitates discrimination. Others on the right will cite it as proof that LGBTQ people are biased against religious Americans, as though those two populations do not intersect at all.

If you’ve sampled any of the social media reaction to Barrett’s nomination, you’re likely awash in some of these arguments already. But casting this as a two-sided issue is missing the point. It’s like when we talk about the presidential election being about “red states” vs. “blue states,” when we’re actually referring to a complex calculus of metropolitan, rural and suburban areas. In both examples, a rich array of determinative factors get boiled down into a simplistic “us vs. them” story.

Let’s take the idea that being Catholic automatically means holding discriminatory attitudes toward LGBTQ people. According to polling conducted by the Public Religion Research Institute, 71% of white Catholics support anti-discrimination laws that cover the LGBTQ community. To use Ginsburg’s faith as a point of comparison, that 71% of white Catholics is a lower proportion than the 80% of Jewish Americans who support the same laws, but not that much lower. Strong majorities of both faith communities want to see LGBTQ people protected from discrimination.

All of a sudden the framing of religion vs. queerness gets a lot more complicated: If Catholics broadly support protecting LGBTQ people, and LGBTQ Americans are twice as likely to be Catholic as people are to be left-handed, then how can we possibly accept this reductive framing once again? And why does it keep coming up?

To be clear, there are Americans who cite religion as justification for anti-LGBTQ attitudes. That’s plain to see, if not on your Facebook feed, then in polling data. Just six years ago, as The Atlantic reported, half of the respondents to a Pew poll said “homosexual behavior” was sinful. These days, again according to Pew, there are only two major religious groups that don’t have majority support for same-sex marriage: white evangelical Protestants and Black Protestants. (61% of Catholics, for comparison, support same-sex marriage.) The issue, then, is that anti-LGBTQ groups have a vested interest in presenting a certain narrow band of American Christianity as representative of religion writ large in order to advance their political aims. And too often, the media goes along with that ruse, because writing that a potential Supreme Court pick “could boost the political power of a small subset of religious people at the expense of almost all LGBTQ people” doesn’t quite fit into a headline, does it?

Even when it comes to white evangelicals and Black Protestants, the same principles apply. Majorities of both faith groups support LGBTQ-inclusive anti-discrimination legislation, even though they have not yet reached majority support of same-sex marriage. And LGBTQ Americans belong to both faith groups. According to the PRRI, 5% of queer people in this country are white evangelicals, and 5% are Black Protestants. That means about one out of every 10 LGBTQ Americans belongs to faith traditions that often get cynically used against them as a rhetorical cudgel.

What’s worse is that the religion vs. queerness framing draws attention away from the very real process of healing and growth that is happening — and needs to continue happening — within American faith communities around LGBTQ issues. Because while we debate how good Barrett would be for religion and how bad she would be for queer people, there are very real wounds that are being noticed and addressed. LGBTQ Americans are indeed much less likely than their straight and cisgender counterparts to have a Christian religious affiliation (Pew’s comparison is 48% to 71%). They’re also less likely to be religious overall. It seems obvious, at least in part, why: Many queer folks have had bad experiences at their churches and have endured disparaging statements made by faith leaders. It’s hard to feel at home when you feel like who you are is wrong. (For example, 79% of LGBTQ Americans in a major 2013 Pew survey rated the Catholic Church as being “unfriendly” toward them.)

At the same time, support for LGBTQ rights has been increasing — as the bevy of statistics I’ve cited above prove — across virtually every religious group in this country. We’re seeing plenty of outward signs of those growing pains, with schisms in the United Methodist Church, policy changes in  the Church of Jesus Christ of Latter-day Saints Mormon Church, growing support for homosexuality among American Muslims and continuing conversations around LGBTQ inclusion within Catholicism. For anyone who’s watched public opinion around LGBTQ people in this country for the past 20 years, the writing is on the wall: Our churches are headed toward acceptance and inclusion, perhaps slowly, but almost certainly. In the long term, the real story about religion and LGBTQ people in this country is not going to be one of endless opposition. Realistically, given that religious affiliation overall is declining in this country, there are probably two outcomes: Churches that evolve quickly have a better chance of keeping, and perhaps attracting, new LGBTQ members. Those that change more slowly may not retain LGBTQ members, but they will still ultimately adopt a friendlier stance. This process of reconciliation is messy and complicated, but it looks nothing like the zero-sum “religion vs. LGBTQ” debate that we are led to believe is real.

As we launch headlong into the debate over Amy Coney Barrett’s nomination, it’s worth remembering that we can skip it all this time. We don’t have to do the Proposition 8 debate or the same-sex marriage debate or the wedding cake debate all over again. We can remember — as Barrett gets pressed on her LGBTQ record — that a majority of religious people in this country support LGBTQ equality and that many LGBTQ people are also religious. We can demand nuance and resist false dichotomies. Because anyone who tries to tell you that Barrett’s stance boils down to religion vs. queerness isn’t just ignoring the facts; they’re arguing in bad faith.