In an age of increasing economic insecurity, should we strengthen the social safety net, or transcend it? 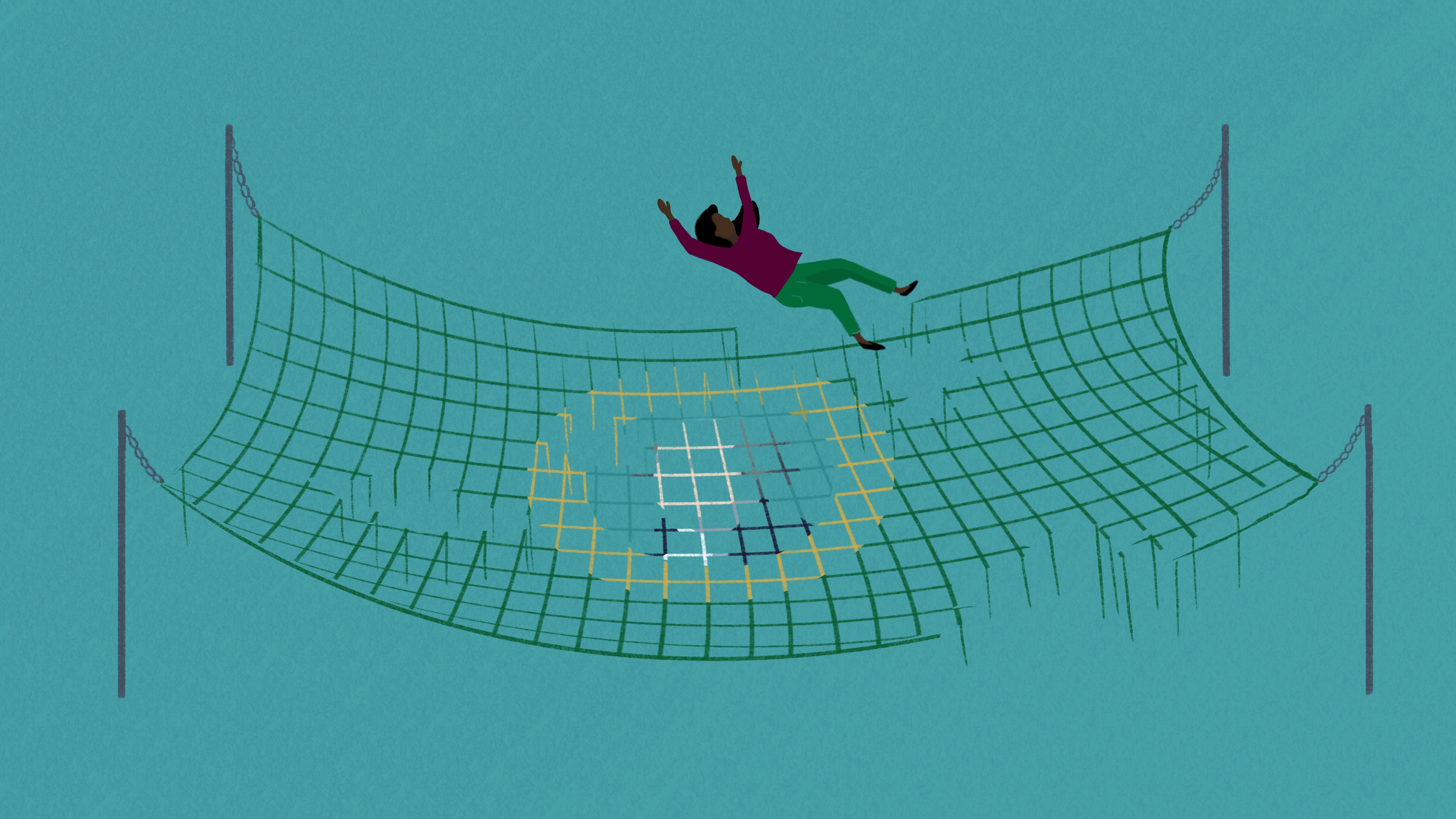 Evidence suggests that the part of our state’s population in need of a social safety net has been growing since the turn of the century, even as that net has frayed, writes Katie Wilson. (Valerie Niemeyer)

Never in recent history have more Washingtonians needed a strong social safety net. In April, as the COVID-19 pandemic shut down whole industries, over half a million workers in our state lost their jobs. Suddenly, they and their dependents needed help to cover life’s basic expenses, from rent and utilities to food and medical care. No doubt some turned to friends and family, and others to private charity. Most, however, relied on the constellation of public programs that constitute our social safety net: unemployment insurance, basic food assistance, Medicaid and Temporary Assistance for Needy Families, among others.

But there’s good reason to believe that, even before the pandemic, a growing part of our state’s population was struggling to survive without a social safety net. This isn’t obvious at first glance. Last year, in fact, Washington state’s official poverty rate dipped below 10% for the first time this century. But the federal poverty level is an abysmal measure of economic well-being. Are you an individual making $13,000 this year, or a three-person family living on $22,000? Your entire income might not rent you an adequate apartment in Seattle, but congratulations! You’re not technically poor.

A more illuminating metric, the Self-Sufficiency Standard, developed by University of Washington professor Diana Pearce, aims to define the income necessary to meet basic needs without public or private assistance. This year, a family of two adults, one preschooler and one school-age child living in King County needed just over $86,000 to cover basic expenses — more than triple the federal poverty level. The standard varies widely by household composition and locality, making statistical analysis challenging. But between 2001 and 2020, the average income needed for that family to live without help in Washington state rose at a faster clip (72%) than both regional inflation (54%) and workers’ median earnings (60%), a divergence driven mainly by the rising costs of housing, health care and child care.

Contrary to official poverty statistics, this suggests that the part of our state’s population in need of a social safety net has been growing since the turn of the century, even as that net has frayed.

1996 was the year of welfare reform. The rationale behind this bipartisan effort was that the poor needed a push. By offering job training and imposing work requirements and time limits on cash benefits, the new system would prod families to climb up out of the social safety net and achieve economic self-sufficiency.

In hindsight, that vision didn’t pan out. Nationally, poverty rates fluctuated with economic cycles but did not markedly decline. But deep poverty, defined as subsistence at less than half the federal poverty level, continued a slow but steady rise, doubling from 3.3% of the population in 1976 to 6.6% in 2014. When the federal welfare reform bill passed, just over one in four poor families in Washington state were in deep poverty. By 2018, that figure had risen to almost half.

But welfare reform was successful at one thing: kicking poor people off cash assistance. In 1996, of every 100 poor Washington state families, 76 received aid through the welfare program Aid to Families with Dependent Children, which that year was replaced by Temporary Assistance for Needy Families. By 2018, after a long decline, TANF served only 29 out of 100 poor families in our state. Early this year, the state Legislature finally moved to reverse some of the severe cuts that program suffered in the wake of the Great Recession.

All of this has consequences for our democracy. Marcy Bowers, executive director of the Statewide Poverty Action Network, describes a self-fulfilling prophecy: Many people without economic stability don’t participate in political life because they don’t feel the system can work for them.

“The number of ‘it doesn’t really matter, my vote doesn’t count’ conversations I’ve had this year, and over the years, is really striking,” she says. Bowers believes that “the safety net can play a role in helping to reenfranchise people.” At the same time, she says, the deep fraying of that net is a tool that can be used to exclude people from the public sphere. From administrative hurdles and transportation problems to inadequate childcare and simple busyness, structural factors conspire to make civic engagement challenging to sustain while hustling to meet basic needs.

Voting patterns lend weight to these observations. Voting is only one facet of democracy, but it has the advantage of being easily measured, and it correlates strongly with income. In the 2016 presidential election, at least 86% of households making over $150,000 voted, compared with fewer than half of those making less than $10,000. Here in King County, voter turnout and voter registration trend higher in neighborhoods with high median income.

Skewed participation, in turn, affects public policy. Many studies have found that U.S. voters are significantly more likely than nonvoters to oppose economic redistribution. A 2014 California study found that people who don’t vote are far more likely to support higher taxes and more services. This points to a disturbing vicious circle. Poor people tend not to vote, while the better-off electorate elects politicians who implement policies that widen inequality and weaken the social safety net. And so the poor stay poor.

These correlations are compelling, but they don’t immediately illuminate the underlying web of causality. However, there is evidence that children from poor families that start receiving cash payments have, when they reach adulthood, higher civic participation than children from poor families that don’t. This points to an obvious way out of the cycle: strengthen the social safety net. Adults receiving assistance may not find their faith in politics suddenly renewed, but their children will grow up feeling that maybe they are part of a society in which their voice matters.

Before the industrial revolution, democracy, when it existed in stratified societies, made no pretense of universality. Ancient Greek democracy excluded not only women, but also slaves, who composed over half the population. Through most of Britain’s transformation from feudal monarchy to modern representative democracy, only the upper classes could vote; and in the early United States, most states restricted voting rights to white male property owners. Collective self-governance supposed a certain degree of equality and freedom: freedom of spirit and mind, freedom from subjugation, freedom from grinding poverty. Democracy, therefore, was considered incompatible with a condition of slavery, servitude or penury, and those fated to such conditions could only be excised from the body politic.

But the factory workers of the 19th century composed an oppressed class of a new sort, one that could improve its lot through collective action and whose miseries, from unbearably long hours and hazardous working conditions to mass unemployment and hunger whenever a slump set in, cried out for political solutions. Alongside the rise of labor movements and, in the United States, the movement to abolish slavery spread the notion that participation in political life should not be restricted by class or race. By late in the century, throughout the industrialized world, these demands were largely met in form, if not always in practice (or even nearly so, as in the American South).

Still, a tension remained between the political ideal of universal democracy — and the social equality and agency it implied — and an economic system that concentrated wealth, widened economic inequalities and treated workers and the poor as disposable. Radicals of the 19th and early 20th centuries envisioned this tension breaking open into revolutionary change. Instead, it was calmed by systemic reforms that spread prosperity more broadly and tamed capitalism’s worst excesses. Among these reforms was the creation of the 20th century social safety net, from unemployment insurance and Social Security in the 1930s to Medicare, Medicaid and the “War on Poverty” programs of the 1960s.

Over the past half century, that tension has roared back with a vengeance. Never has inequality been more extreme, never has our democracy seemed more precarious and — especially since March 2020 — never has the need for a strong social safety net been felt more keenly.

But is strengthening the social safety net really the answer? A “safety net” is something one needs only rarely, in the event of an accident. The metaphor seems misplaced in an era when economic insecurity is commonplace and hardship more systemic than random. Perhaps we should ask a different question: Why should life in a society as prosperous as ours be a perilous high-wire act? Maybe we could all just walk on the solid ground.

There are several ways to tackle the poverty, insecurity and inequality that are, among many ill effects, eroding the promise of our democracy. Strengthening the social safety net is just one. Another and complementary approach is to focus on the workforce, creating good public jobs and passing policies that improve workers’ bargaining power, wages, benefits and protections. That way, fewer workers and their families will need to rely on public or private assistance to make ends meet. On this front our state is doing quite well, comparatively speaking: Washington is the third most unionized state in the U.S., has among the highest minimum wages and is among a handful of states leading the way on policies like paid sick leave and family and medical leave. Of course, our national standards are dismally low. Such progress coexists with widespread homelessness and childhood hunger, and life on $13.50 an hour is no walk in the park.

But there’s a third way, too, one that may be uniquely suited to our time in history. What if high-quality health care and child care were universal, guaranteed? No one would need a “safety net” to cover these big-ticket items because they’re unemployed or their paycheck is too meager. These would simply be public goods that everyone can count on. How about adding to that list preschool and higher education, housing, public transit, elder care — and even a basic income? Instead of “temporary assistance for needy families,” maybe what’s called for is a guaranteed, dignified standard of living for all.

To establish a floor that supports everyone, no shame or fall from grace required, seems a good way to create the sense of belonging to a social whole that is needed for true democracy to flourish. With a global pandemic upending business as usual, it’s a good time to dream big. But changes like these won’t happen easily or without immense pressure from movements that include the very people now most disengaged from the political process. In other words, we must reinvigorate democracy to create the conditions for democracy. Bootstrapping ourselves up in this way is one of the challenges of our century.