Seattle in turmoil as 2020 elections loom

We’re a boomtown beset with idealism, but we’ll still need federal help to realize our dreams. 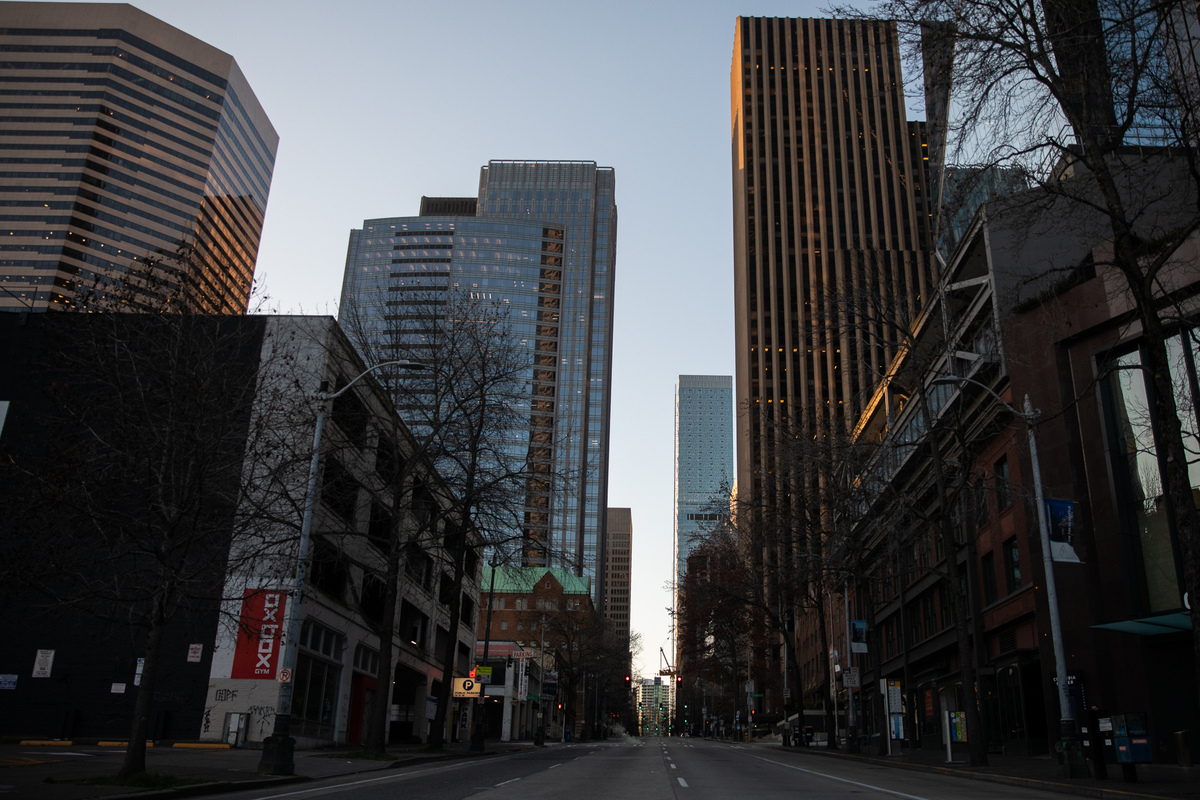 One thing is certain: The November election is crucial to Seattle’s future.

Today, the city is stunningly set back by the pandemic and its economic and social fallout, failing infrastructure, a “hollowed out” downtown and political tumult that shows no sign of abating. All of that exist on top of our chronic “crises” of homelessness, inequality and unaffordability.

At the same time, the city has damaged its own reputation as the enlightened progressive answer to the nation’s urban aspirations, a pose numerous mayors — from Greg Nickels to Jenny Durkan — have cultivated and encouraged. Somehow, the “Seattle way” became “Seattle knows better.” Paul Schell pursued his vision to make Seattle a global leader in free trade. Nickels touted our global leadership on climate; Mike McGinn wanted to pedal Seattle to the forefront of sustainability and fossil fuel divestment. In the era of Trump, we became the center of “the resistance,” according to Ed Murray and Durkan. The hubris points to an underlying belief in Seattle Exceptionalism that goes beyond “the bluest skies” nonsense.

Images of unrest, the violence at CHOP and the “Seattle Is Dying” meme paint a much different picture of our "exceptional" city. So, too, the fantastical notions that we are a city of “anarchy.” These convulsions and distortions have all given the city a national profile — exploited by conservatives and echoed around the state — as a place where, at best, progressive tolerance has let things get out of control, or, at worst, the antifa-anarcho-socialist revolution has taken root — or taken over.

Seattle has periodically been beset with image problems, particularly after the 1919 General Strike, the antiwar bombings of the ’60s, and the World Trade Organization protests of the ’90s. And there were long decades where we had to live down the idea that we were a cultural “dustbin.”

The difference now is that Seattle has set its civic bar very high. We believe in our civic souls that we have the chance to make the best city in the Western world. Our 21st century prosperity, fueled by technology and growth, has encouraged us to believe such aspirations are both desirable and attainable. All would be perfect if we simply steered the economic cornucopia in the right directions.

We’re a boomtown beset with idealism. This is not necessarily a bad thing, except one does not necessarily lead to the other, and in many cases they are in opposition. Boomtowns often leave wreckage in their wake.

Now we face obstacles that can thwart both our boomtown and our dreams of becoming a gleaming liberal city on the hill.

The pandemic has kicked the struts out of downtown as tourism and the convention business melted away. Even the most optimistic say it’ll be five years before we return to early 2020 levels, if then. In addition, big employers are now incentivized to go elsewhere (Bellevue) or work from home. The payroll tax will nudge some, and the working-from-home thing, a promise Bill Gates and others extolled in the ’90s, has finally been supercharged by epidemic necessity.

The way many of us work, especially those in downtown office buildings, could be profoundly altered as folks opt for home or remote locations out of health concerns or convenience. With a decline in office workers and retail, downtown might rely more  than ever on a less predictable visitor/convention model. Inevitably, massive investments to again expand the convention center or replace stadiums or accelerate the new waterfront redevelopment will prove expensive ways to prop up an increasingly competitive visitor industry.

The unfolding economy suggests big difficulties ahead as well,. Unemployment, potential waves of evictions, job loss and small business challenges are occurring at a time when rising home prices have put affordability further out of reach.

Urbanist plans for speeding up regional transit, expanding Metro service, adding a First Avenue trolley and creating a truly zeitgeist-shifting bike and pedestrian infrastructure are further off than ever. Plus, if we’re slowing down pothole fixes, trying to prevent the West Seattle bridge from full collapse and having any notion of fixing other systemic bridge issues in a city of bridges, our dreams are hamstrung by problems we are not funded to address now.

Public safety is also a dominant challenge. Advocates of defunding the police — some who want massive and immediate budget cuts, others who want to end the police altogether — have set a high bar for reckoning with past ills and future abuse. Durkan wants to “reimagine” public safety methodically, rather than haphazardly slash the police department budget. This reimagining is more than having social workers respond to some 911 calls. It involves investing more money in the Black community. Durkan has proposed spending $100 million to begin redressing the past, but also setting the stage for a kind of integrated solution that takes into account a working social safety net, mental health systems, basic health care, education and other support mechanisms. This is the progressive dream, and all it takes is money.

Durkan knows this. Seattle’s ambitions were expensive before COVID-19 hit. Making up lost ground and dealing with a major social justice reckoning require a lot of new investment. But from whom? Durkan said in a recent interview with my colleague, David Kroman, that she wants a regional payroll tax — one that would not incentivize Amazon and other companies to jump across Lake Washington, as they show some signs of doing. Second, she wants a city income tax. A regional tax doesn’t seem likely, given the support needed from communities that might be able to make hay now from Seattle’s taxing policies and who are tax resistant to begin with. As for the second idea, a Seattle income tax is thus far illegal. A major court decision or state constitutional change would be required, along with statewide tax reform to make our system less regressive. Those are worthy but long-haul goals.

So, who will fund Seattle’s dreams? Seattle, of course, hopes for a continued Democratic run in Olympia, controlling the houses and most state offices, but the state is facing its own budget issues and tax limitations. And so eyes hungrily turn to the feds. One hope is for a major infrastructure bill or new pandemic stimulus that will help with COVID costs and potentially other infrastructure needs.

The stakes of the November election could not be higher.

A Donald Trump win might mean a divided Congress and a hostile president whose attorney general has already mulled criminally charging Durkan for how she handled Black Lives Matter demonstrations and occupation on Capitol Hill. Trump’s animus for blue states is well known, and revenge seeking would be likely.

A Democrat in the White House with control of Congress might turn on a spigot for grants and projects that would help address the safety net, police reform and transportation, among other things. For Seattle to become the role model for reform, it would need to become a federal supplicant, as it seeks support for its infrastructure and fuel for its economic engine and social transformation. Having Sens. Patty Murray and Maria Cantwell in positions of power in the other Washington could help, as did the “Scoop and Maggie” team of yore. But that requires a clean sweep of House, Senate and presidency.

Seattle has turned to the federal government many times before, but it can come with risks. The city awaits a federal infrastructure bill, but that keeps getting kicked down the road. Seattle lost federal support for the Super Sonic Transport and faster-than-sound aircraft that many hoped would boost Boeing’s prospects during an economic downturn. Congress denied federal funding for it, and that goosed the so-called Boeing recession of the early ’70s. Wes Uhlman, the Democratic mayor of that period, spent much of his time flying to Washington, D.C., trying to get money out of the Nixon and Ford administrations for transportation projects and programs to fight racial and social inequality. These efforts often occurred when Uhlman was having to tighten belts at City Hall. During a recall campaign in 1974, he was criticized for being an “absentee” mayor while he was out shaking the federal money tree.

Amid these struggles, Seattle is in the middle of a political sea change, with many camps unhappy, from law-and-order neighborhood types to social justice activists. On the far left, Kshama Sawant is fighting a recall campaign, and so is centrist progressive Durkan. The city council is fairly new in its current formulation, and much more leftist than its previous incarnation. The district system was designed as a bulwark against downtown business, and it has worked. We’re going to find out, as council members go into the budgeting process, just how progressive or pragmatic they really are.

Durkan, who last year promised our “golden years” were just around the corner, has had to admit that COVID pushed that timetable back. She sees the pandemic disruption as significant, a new kind of industrial revolution in terms of its broad impact and the displacement it has created. “America’s golden years are farther away, and Seattle is no exception,” she says now. “If we can’t get it right, I fear for America.” Despite the challenges, she says, “I still believe we can get it right.” Maybe, but we’re going to need a lot of help, starting with November.