Sustaining anti-racism after a summer of protests for Black lives

There are many who have embraced a vision of an equitable society. Learn from them. 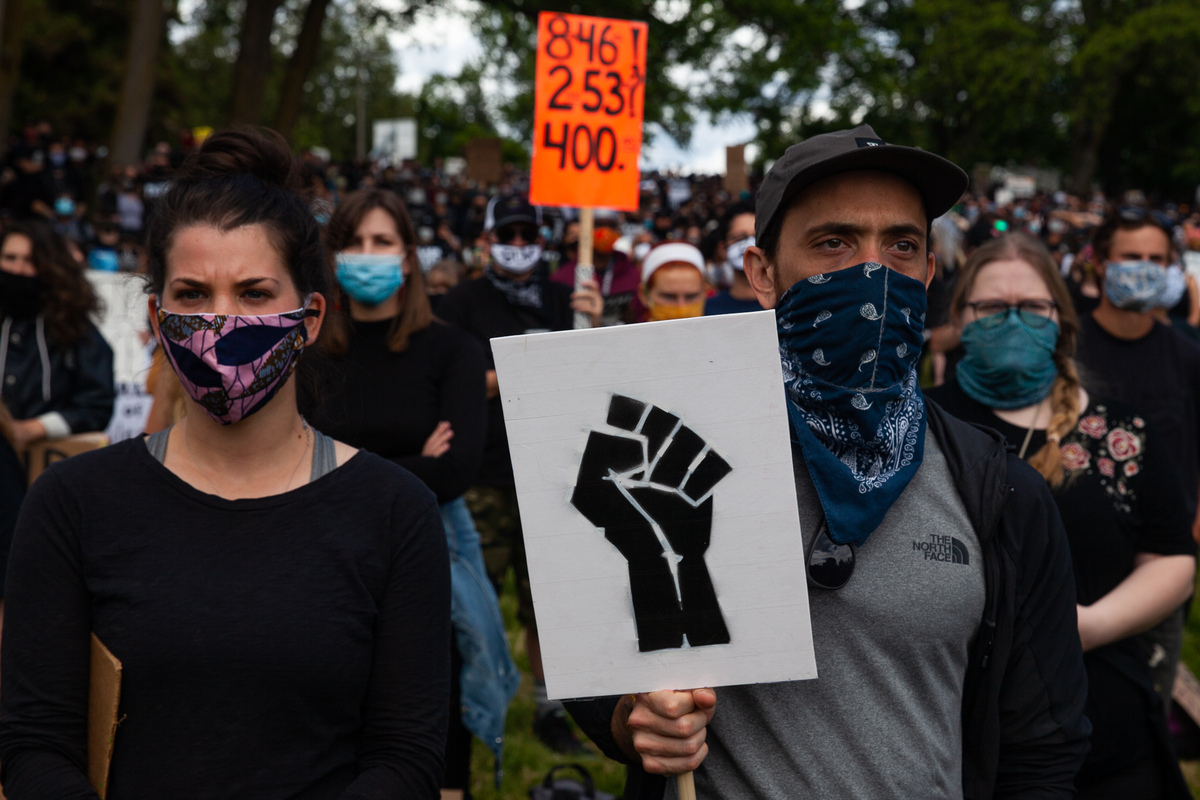 In the first two columns of this series I’ve used a metaphor to shed light on the impacts of white people’s uninformed intervention in racial struggle. Imagine that you happen upon a bad car accident. There are several people running alongside you toward the victims. If you’ve read the first two columns in this series, you know to listen carefully and take your cues for how to respond from the victims, to respect their perspective and look for experienced, trained leadership before doing anything yourself.

After the injured have received appropriate medical care or been transported to hospitals, you get back in your car and head home. As you reflect on your experience, you wonder what caused the accident, how it could have been prevented and how you can be better prepared the next time you encounter an accident.

Were there mitigating circumstances: oil or ice on the road, mechanical malfunction, a medical crisis, a bee, alcohol or drug impairment? Was everyone wearing seatbelts? If there were children or animals in any of the cars involved, how should they have been assessed or treated? There were so many things happening at once, how should you have prioritized what order to do things? Was it, in fact, an accident, or a road rage event? What questions should you even ask to evaluate the type of treatments necessary?

These are the same kinds of questions many people who have participated in protests following the police killings of Black and brown men and women have asked themselves and one another. The answer, in both instances, is seemingly simple: You must learn. But learn from whom?

These days, many people of color have said openly that they are not willing to put the time and effort into teaching white people about racism. That’s because we are the ones lying in the streets, screaming in pain. We have been picked up, dragged around, pushed and pulled by well-meaning white people for generations. Pain is the body’s honest indicator that something is wrong. That we are still screaming in agony tells society how ineffective most treatments have been. While the experience of generations has made us amply able to identify the treatments we require for wholeness, we don’t have the additional emotional or psychological capacity to provide white people with on-the-job training.

This may be hard for some to fathom, but you’re not the first “woke” white person. White anti-racist activists and organizers have been trying to get other white people’s attention for generations. They always lose out to the “moderates” in the room who are willing to settle for half measures appeasing those who benefit from oppression. A quick example: Desegregation of schools throughout the country was impeded by the words “all deliberate speed” in the Supreme Court’s 1954 Brown vs. Board of Education decision. The word “deliberate,” inserted by Justice Felix Frankfurter to appease Southerners, was often interpreted to imply a slow, gradual pace. The pace has been so slow we still don’t have equitable education in communities of color. And if the tactic sounds familiar, it’s the same argument we hear today from Mayor Jenny Durkan and her supporters around defunding the Seattle Police Department.

White people like Jane Elliott, Diana Dunn, David Billings, Joe Barndt, Tim Wise, Anne Braden and, locally, Ilsa Govan have dedicated their lives to liberating white people from white supremacy. They understand the need to analyze racism clearly and have equipped themselves with the tools to prepare you to successfully defy and untangle yourselves from it. Local organizations like European Dissent, Coalition of Anti-Racist Whites and People’s Institute Northwest exist to educate, support and empower white people dedicated to dismantling racism and the systems holding it in place, while simultaneously partnering with communities of color to create new structures able to serve a just and equitable society.

It may be tempting to ask, “Why can’t I just work with my Black friends or organizations led by people of color?” That’s like asking why you can’t go into the surgical theater to learn how to assess the accident victim. The simple answer is most of those organizations are busy advocating for and building up their communities. They are trying to survive what we all know is no accident, but an intentional, methodical process for denying people of color access to resources and power while enforcing the mythology of white supremacy. Those friends or organizations don’t have time to hold your hand while you learn how the systems and institutions of this country uphold racism.

You also need to decide what level of expertise you want to have. Do you only want to administer first aid until professional help arrives, do you want enough advanced training to provide basic treatment, or do you want to learn how to dismantle racism completely?

Just like medical training, becoming anti-racist is a multistep journey, one that requires honest self-assessment and commitment. The Continuum on Becoming an Anti-racist Multicultural Organization is a great tool for institutional self-assessment. Take a look at my pared-down adaptation for individuals.

You may already be on the path to becoming anti-racist. Do an honest self-assessment and move into the next step of your development. Everyone wants to believe they’re further along than they really are, so start one level lower than where you think you are. Consider it a refresher, preparation for what’s to come. Notice the lines between each level of the continuum are wavy? That’s because it’s possible to move backward as well as forward. Once backward motion begins, if not caught and corrected, it’s possible to keep moving in reverse. The key is to recognize when you’ve stepped backward, make amends if you’ve created damage in the process, identify what set you back and return to forward motion.

As with being part of a medical cohort, becoming anti-racist is easier when you’re part of a community making that same commitment. That community can be the support and challenge to keep you grounded on the anti-racism path.

Reading books seems like a good way to start, but too many people stop there and never move to action. If you commit to truly ending the lie of white supremacy, the books you read will need to focus on racism, as opposed to prejudice or bias, and show a clear path of action. Everyone has biases or prejudices, but in this country, especially in the Pacific Northwest, only one racial group has exercised the power to turn those prejudices into systemwide laws, policies and practices that result in oppression. Effective anti-racism must focus on recognizing how systems have been infected with white supremacy and creating effective treatments to remove the infection.

Suggested books to get you started: Howard Zinn’s People’s History of the U.S.; Understanding and Dismantling Racism by Joseph Barndt; Anne Braden’s The Wall Between; any book by Tim Wise; So You Want to Talk About Race or Mediocre: The Dangerous Legacy of White Male America by Ijeoma Oluo; or my book, The Truth About White People.

It isn’t necessary to agree or disagree with these books or their writers. It is necessary to explore the ideas and concepts in them, many of which may challenge your understanding of your history, politics and practices. If you disagree, hold to your commitment by doing the research to prove them wrong.

Whether you want the skills to simply provide anti-racist first aid or to profoundly change people’s lives by eliminating racism, it’s important to participate in training focused on identifying and treating systems. It’s ineffective to attend workshops about eliminating hate rather than dealing with systems.

To elaborate on what I said in the second column: Racism isn’t about hate; it’s about access to resources and power. If it was about hate, the strategy for ending racism would be to either convince those who hate to be more loving or to make those being hated more loveable. Either way, racism continues because it places the power to define who is loveable into the hands of those doling out the love. That goes counter to the very basic aspirational vision of this country laid out in the preamble to the Constitution. Justice is not contingent on love, quite the opposite. In a truly just society everyone would be able to count on equal justice. A woman murdered in her sleep would count on her killers being held accountable, no matter who they were. Justice must be applied equally to everyone, whether or not you or I deem them loveable.

You can’t dismantle a structure you don’t understand. Just like books, conversations about race and workshops on bias or prejudice are great starting places, but it’s important to go beyond them. Go deeper, step into emotional, psychological and intellectual space that challenges your views. Racism is an interactive process; no one participates in it alone. Likewise gaining the knowledge, tools and experience to dismantle it requires interactive participation. Prepare to be uncomfortable. Since many white people conflate comfort with safety, prepare to feel unsafe and ask yourself whether you’re truly in any danger or simply experiencing an uncomfortable challenge to your white supremacy.

An effective training is led by a professional team of people who have made the commitment to dismantle the systems that reinforce white supremacy and undergone their own training. The team will consist of at least one person of color and one white person.  This configuration ensures that the concerns and challenges faced by participants can be addressed by someone with similar racial life experiences. The team will be accountable to a larger anti-racist community and follow the basic protocols of listening to the people most impacted by racism.

Look for programs that will help you create an action plan. Theory is useless without action. I have never worked for a company or organization that said it needed to change something, but didn’t create an implementation plan. It’s amuses me how people who have diet plans, closet plans, vacation plans, vision boards, Six Sigma, Agile, Trello boards, strategic plans and countless other methods for implementing their hopes and dreams seem to hit a brick wall when it comes time to create a plan to dismantle racism. There appears to be a smoke screen keeping them from accessing those same tools.

Once you have an understanding of the personal, structural and institutional ways racism is reinforced, identify how you can create an action plan to use your knowledge, experience and skills to implement what you learn in the places where you have agency. Do so in collaboration with other white people and led by people of color who are themselves accountable to their communities.

The community you commit to will see your progress and, when they’re ready, eagerly put you to work. There is so much to do. There are many who have embarked on this vision of an equitable society. Learn from them. Work with them. Together, we could transform into a society where every person’s gifts are valued and justice is defined as returning to wholeness.