How Big Tech landed in the crosshairs of antitrust law

During the Reagan era, a permissive antitrust philosophy took root, setting the stage for the rise of Amazon, Apple, Facebook and Google. 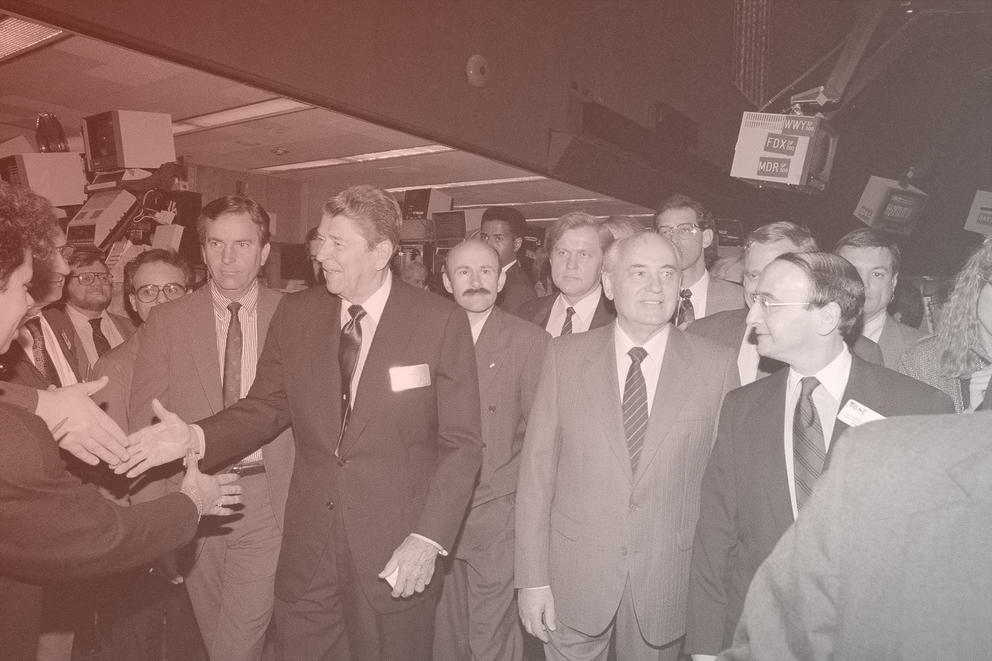 Former President Ronald Reagan shakes hands with a well-wisher as former Soviet President Mikhail Gorbachev smiles on the floor of the New York Stock Exchange, May 13, 1992. During his presidency, Reagan was influenced by legal scholar Robert Bork, who argued for a narrow conception of antitrust enforcement. (Richard Drew/AP)

The dust of the presidential election will eventually settle. Attention will turn to the issues that will define 2021 — and high on that list is the problem of Big Tech. Amazon, Apple, Facebook and Google have inspired bipartisan mistrust and accusations of monopoly power. Between the House Judiciary Committee report published Oct. 6 and the Google antitrust lawsuit filed by the Department of Justice two weeks later, we may be in the early days of a revolution in how government treats the corporations that dominate our economy and our lives.

But it’s far from the first time such a shift has occurred. Antitrust law is inextricably entwined with history: the economic shocks, the warring political ideologies, the shifting winds of social movements and corporate pressure. To understand the possible paths ahead, it helps to survey the one we’ve already traveled.

Last week, I told the story of the 1912 presidential election through the lens of antitrust, ending in victory for Woodrow Wilson and his vision of “regulated competition.” Just as significant as the candidates’ disputes was the growing consensus they all shared with the public: Large-scale industry was here to stay, and government needed to take a firmer hand in its affairs, whether through antitrust lawsuits or nonjudicial bodies with regulatory powers.

This is the fourth column in a series on antitrust and Amazon. Read parts one, two, three and five.

Big business saw the writing on the wall and decided its best interest lay not in fighting this new regime wholesale but in shaping it. The U.S. Chamber of Commerce was founded in 1912 in partnership with the U.S. Department of Commerce to enable closer cooperation between business and government. Trade associations in the various industries began working with federal agencies and establishing codes of fair competition, as if to say: We’ll get our own house in order. Just stop suing us.

By the Roaring ’20s, business interests were getting what they wanted: a more permissive approach to antitrust law. While some practices, like overt price-fixing or colluding to carve up a market, were still illegal per se, the courts adopted a “rule of reason” interpretation and began to judge many “restraints of trade” allowable, so long as they weren’t intended to stifle competition and did not obviously do so.

The spiraling market failures and human suffering of the Great Depression shattered this brief new status quo. Franklin D. Roosevelt’s landslide victory in 1932 was followed by an ambitious experiment in controlled market capitalism through the National Industrial Recovery Act and the National Recovery Administration of the “First New Deal.” Antitrust laws were suspended; in theory, government, business and labor would cooperate to set prices and wages, jumpstart production and get America back to work.

In practice, conflicting interests proved hard to reconcile. In 1935, the Supreme Court struck down the NIRA on grounds of federal overreach — one impetus for Roosevelt’s bid to increase the number of justices on the bench. Social unrest continued, and the “Second New Deal” brought a more adversarial relationship with business. This included an aggressive revival of antitrust law under the auspices of Thurman Arnold, whom Roosevelt appointed to lead the Department of Justice Antitrust Division in 1938.

Soon enough, the Supreme Court swung back toward a more expansive interpretation of what constituted an illegal restraint of trade. (The court-packing plan may have failed, but between 1937 and 1941 a remarkable seven justices retired or died, so it became more or less Roosevelt’s court.) The next several decades were a bustling time for antitrust enforcement. In 1950, Congress broadened the language of the Clayton Antitrust Act, rendering almost any merger or acquisition suspect. Healthy competition, the postwar antitrust ethos held, meant maintaining a market structure that allowed smaller businesses to succeed. The court began denying mergers that would have resulted in market shares as low as 7.5%, or even 5%.

The 1970s brought yet another revolution in antitrust law. Early in the decade, postwar prosperity hit a roadblock. A “profit squeeze” gripped corporate America, which faced new competition from low-cost international producers and felt itself hemmed in by regulations, taxes, high wages and other prerogatives of a significantly unionized workforce — and, of course, antitrust enforcement. But there was, ready to hand, an ideological hammer that would help to smash through these constraints. It had been forged at the economics department of the University of Chicago, and it proclaimed the near-infallibility of the free market.

This hammer was brought down on antitrust law by the legal scholar Robert Bork. In his youth, Bork had been an admirer of the socialist Eugene Debs. But after a “conversion experience” prompted by exposure to the Chicago School, he became a true believer in unregulated markets. Nearly all corporate behavior, this outlook presumed, enhances economic efficiency and, ultimately, the greater good. In 1912, aggressive trustbusting had been billed as savior of the capitalist marketplace; now, Bork argued it was a gateway to socialism. Antitrust should narrow its focus to those rare cases where there was demonstrable harm to “consumer welfare,” which, above all, meant prices.

In 1979, the Supreme Court adopted Bork’s analysis more or less wholesale. Ronald Reagan’s administration later made it the official policy of the Department of Justice. With a few major exceptions — like the breakup of the telecommunications company AT&T in 1982 and, fast-forwarding, the case against Microsoft settled in 2001 — the court now took a permissive stance toward the behavior of dominant firms, and smiled upon mergers of all kinds. Mergers and acquisitions multiplied, regulations evaporated and the new technologies of the Information Age paved the way for a global economy and the ascendency of the multinational corporation.

In turn, this slimmed-down antitrust philosophy set the stage for the rise of Big Tech, which was uniquely adapted to its focus on consumer prices. How could you pin a charge on companies like Google and Facebook, which offer their services to individuals free (because you are the product), or on Amazon, which is famously “obsessed” with the customer and built an empire by offering the widest range of products at the lowest prices?

And yet, as these corporations grew in size and power, complaints about their behavior piled up. If Amazon writes the rules of online commerce in ways that drive legions of independent businesses out of business, what does that mean for product variety and innovation, not to mention the economic well-being of the communities in which those businesses were based? If Google uses its search engine dominance to boost its own products or manipulate search results based on what advertisers are willing to pay, how is that fair or in the public interest? What does it mean that Facebook and Google know more about our habits and desires than we do ourselves, and use this data to maintain their dominance?

Questions like these are now fueling a revival of interest in an older conception of antitrust law, one more attuned to what Louis Brandeis, Woodrow Wilson’s economic adviser and later Supreme Court justice, termed “the curse of bigness.” The “New Brandeis” movement brings us back full circle to a vision of antitrust that extends beyond narrow outcomes like prices, taking a more expansive view of “consumer welfare” and paying close attention to market structure and the competitive process. The breakout star of this movement is the young legal scholar Lina Khan. In her 2017 paper, “Amazon’s Antitrust Paradox,” she tackled the Borkian orthodoxy head-on: “Congress passed antitrust laws to promote a host of political economic ends — including our interests as workers, producers, entrepreneurs, and citizens.”

Khan also had a major hand in the House Judiciary Committee’s report on competition in digital markets published last month, serving as counsel for the antitrust subcommittee and helping to lead its investigation. The report’s recommendations are sweeping. They range from breaking up the big tech companies to imposing new rules on how they run their platforms. Unsurprisingly, Amazon, Apple, Facebook and Google are preparing to fight. The battle over the future of antitrust will be contentious and consequential. Next week, I’ll ask the question: What should be done about Amazon?