Liberal Seattle is not the only bubble in Washington state

After Trump’s win in 2016, national media said urban-liberal enclaves were out of touch. But there are rural-conservative bubbles, too. 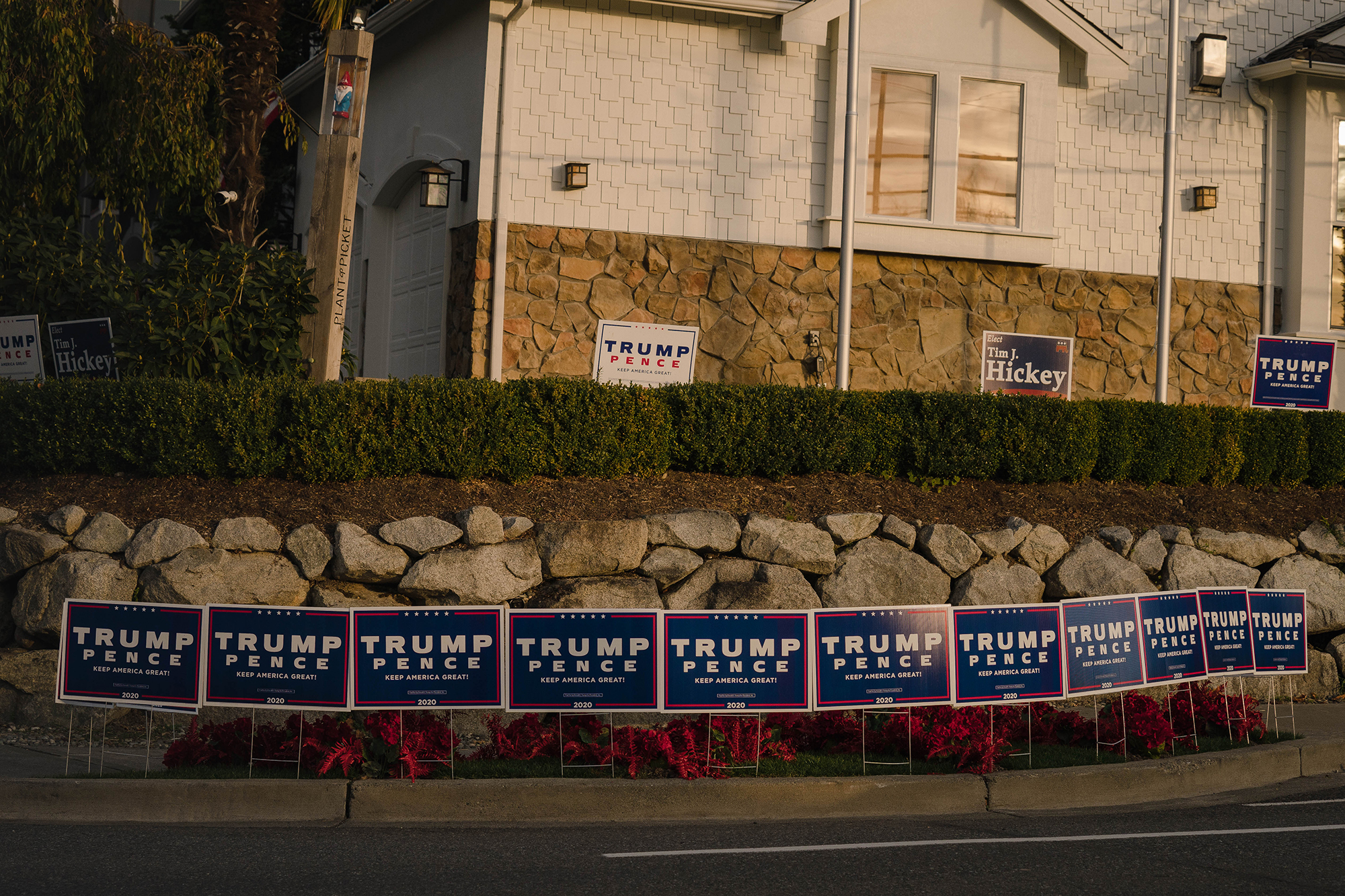 The shock of Donald Trump’s 2016 election victory triggered soul-searching in the urban-centered media. Progressive cities like Seattle were said to be in a “blue bubble,” out of touch with the rest of the state and America.

Some of us took to heart the need to get out and learn what people who voted for Trump were thinking. I took part on a trip to Sherman County, Oregon, organized by The Evergrey, to talk with folks whose county had voted a mirror-opposite image to King County: 74% for Trump.

Since then I’ve visited dairy farmers, cattle ranchers, wheat growers, migrant workers, mainstream Republicans, commercial fishers and others. Photographer Matt McKnight and I drove the state from end to end. I even rode a combine in a parade through Lind in Adams County on the day of its annual demolition derby.

To the extent that an often self-absorbed Seattle has a limited view of the state, the reporting trips helped deepen my understanding of what unites and divides us politically and culturally. But I have also become aware that we’re not the only ones in a bubble. Let’s be honest: There is another bubble in Washington — a deep red one.

This struck me on a recent road trip in Eastern Washington, traveling through Lincoln County and the Palouse country. A couple of years ago, when reporting from there, when people learned I was from Seattle, the conversation went something like this: “Oh, you’re from Seattle. We just visited by daughter who is at the U-Dub and had dinner at the Space Needle. It’s a beautiful city.”

Not so much this time. A common reaction I heard when people discovered I had come from The Emerald City: “Really? Seattle? It’s so dangerous with the riots and protests.” In the eyes of many, we’ve gone from the liberal-yet-livable city to a so-called “anarchist jurisdiction.” That image of Seattle — in general, a grossly exaggerated and incomplete one — is ingested through Fox News, other right-wing media and far-right online echo chambers. It reminds me of the TV coverage of the eruption of Mount St. Helens 40 years ago that left the impression that Seattle was in ruins. Both elicited calls from across the country: “Are you OK?”

There are other examples of the burbling red bubble. While Republicans complain of single-party rule in Seattle and in Olympia, with just a single Republican occupying a statewide elective office, a look at the electoral map of Eastern Washington indicates longstanding red politics. I asked a wheat farmer in Grant County about his voting habits, and he assured me that he votes for the person, not the party. When I asked when the last time was that he voted for a Democrat, he thought and then said his father had voted for Scoop Jackson. Scoop last ran for office in 1982. If one party government is a problem, it is a bipartisan problem in many places.

Ongoing secession talk continues in Eastern Washington, where some disenchanted people continue to push to divide the state and form their own state, called Liberty. There is similar talk in rural Oregon as well. Secession talk isn’t new, but you’d think we would have left it behind as a relic from ages ago, given the interdependence of people in the state. The Columbia River alone is a major artery that links the resource and agricultural economies with Pacific trade and regional hydropower, a linkage that benefits all Washingtonians. But separatism remains a dream for some. Such fantasies are often bubblelike — a way to avoid diversity and difference. The bubble as homogeneous bunker.

The Seattle Times' Danny Westneat, in a post-election column, provided another example. The gubernatorial candidate, Loren Culp — who, like Trump, has refused to concede his loss to Jay Inslee as of this writing — was shocked that a majority of Washingtonians voted to approve age-appropriate sex-education in public schools.

Culp said on election night: “I’ve talked to tens of thousands, hundreds of thousands of people over the last 15 months. I haven’t met anyone who wants that. You’re telling me it’s passed by 60%? You’ve got to be kidding me!”

On a drive across rural Washington, Culp signs were visible everywhere — in yards, side streets and pickups. Perhaps the preponderance of such signs defined the red bubble’s edges and gave those within the false impression that a majority supported him and opposed sex education. Neither Inslee’s reelection nor the passage of the sex-ed bill would surprise anyone who pays attention to the fundamentals of Washington politics, which seem set on a pretty predictable 60-40 statewide ideological split these days. There is no conspiracy or suspicious outcome here.

Back in the 1980s, when I was an editor at the now-gone Washington Magazine, our statewide mission was to be a uniting force in the state by lifting the “Cascade Curtain” between east and west, a term that echoed the rhetoric of the Iron Curtain era. Back then, the intrastate rivalry had settled into something genuine, but largely one of local pride: Huskies vs. Cougars, salmon vs. apples.

In those ancient times, Democrats and Republicans represented both sides of the state in Olympia and Congress. The governor was a Seattle Republican, John Spellman, and the speaker of U.S. House of Representatives was a Spokane Democrat, Tom Foley. The political divide had yet to become a vast gorge.

Our magazine tried to foster continued cross-state understanding. Just because Spellman was a Republican didn’t mean he was in touch with farmers of the Palouse; just because Foley was from Eastern Washington didn’t keep him in touch with his constituency while he was walled off in House leadership in Washington, D.C. Understanding needed to be nudged, if not actively fostered.

One thing our magazine sponsored was the Farm-City Swap. Working with the state’s wheat growers, we arranged for families in Western Washington to spend a weekend or more on Eastern Washington farms, and then invite their farm hosts to come over the mountains and spend a weekend at their homes. I enjoyed experiencing the harvest on a farm near Connell and learning about the unexpected complexity of being a modern family farmer.

But an important part of the program was reciprocation — getting the farmers over to the west side, too. It is fair to say that in times past, people in rural areas come to cities more often than city dwellers to small towns. They have more links, as their offspring often come for school or jobs or expanded cultural horizons.

But do they really get to meet people who are so unlike themselves? Can they put a human face on homelessness, or on activists fighting against police brutality and for racial equity? Can they understand the culture and lifestyle of software coders and challenges of urban artists or the struggles of immigrants? Could they see Seattle’s racial diversity as a source of strength rather than a weakness or a threat?

And can they get beyond the warped image of the city made villainous by countless politicians who campaign against Seattle as a default position? The late Sen. Slade Gorton became a master at driving this wedge around the state. It has become a mainstay of GOP politics.

The purpose of such cross-state communing and swapping is not to convert anyone but to walk a mile or two in each other’s shoes, to do what people are often able to do in small towns, which is connect as people and as, albeit somewhat distant, neighbors with one another.

With the election of Joe Biden, who pledges to be a national healer, this might be the time — as the COVID-19 pandemic permits — to escape the red bubble and venture to the big city.

Seattleites might often give the impression that we think we are better than everyone else, richer, smarter, more moral. Politically, we throw our weight around. There are lots of reasons to dislike the city’s politics. I can understand why that’s a bubble people might want to burst.

It’s also true that Seattle’s bubble is not monolithic. Seattle contains many bubbles within, notably its own north-south racial and class divides. There are parts of Rainier Beach that are as alien to folks in Magnolia as South Park is to people in Ferry County. Living in complex communities, we can often be strangers to ourselves. That is a challenge of living with complexity.

We ought to get out of our bubbles to seek a more personal and perhaps realistic view of how we’re living and coping — or not coping — in this region, to understand its nuances, to learn why we’re doing what we’re doing. We shouldn’t let political signage, race, ideology or fear wall us off.

It takes effort. Greater understanding is sometimes hard to achieve but is sometimes possible over a meal with conversation. I remember an event I did with conservative radio hosts and their audience in Everett awhile back. A man came up to me at the pre-event reception and shook my hand. He was from Lake Stevens, he told me. He had never met a Seattle liberal before.

Getting out doesn’t necessarily mean we’ll all agree or be friends, but I believe gaining insight is always a good thing. In the Biden era, let’s commit to popping out of our bubbles and inviting others in for a visit. We’ll be better for it.

Editor's note: A Crosscut “Inside the Newsroom” discussion on the topic of furthering understanding across the region took place on Election Day between Starla Sampaco, Editor-at-Large Knute Berger and Associate Opinion Editor Mason Bryan and can be viewed here.