What a Biden presidency could mean for WA politics

With a friendly administration and a shifting local party system, a political realignment could be underway. 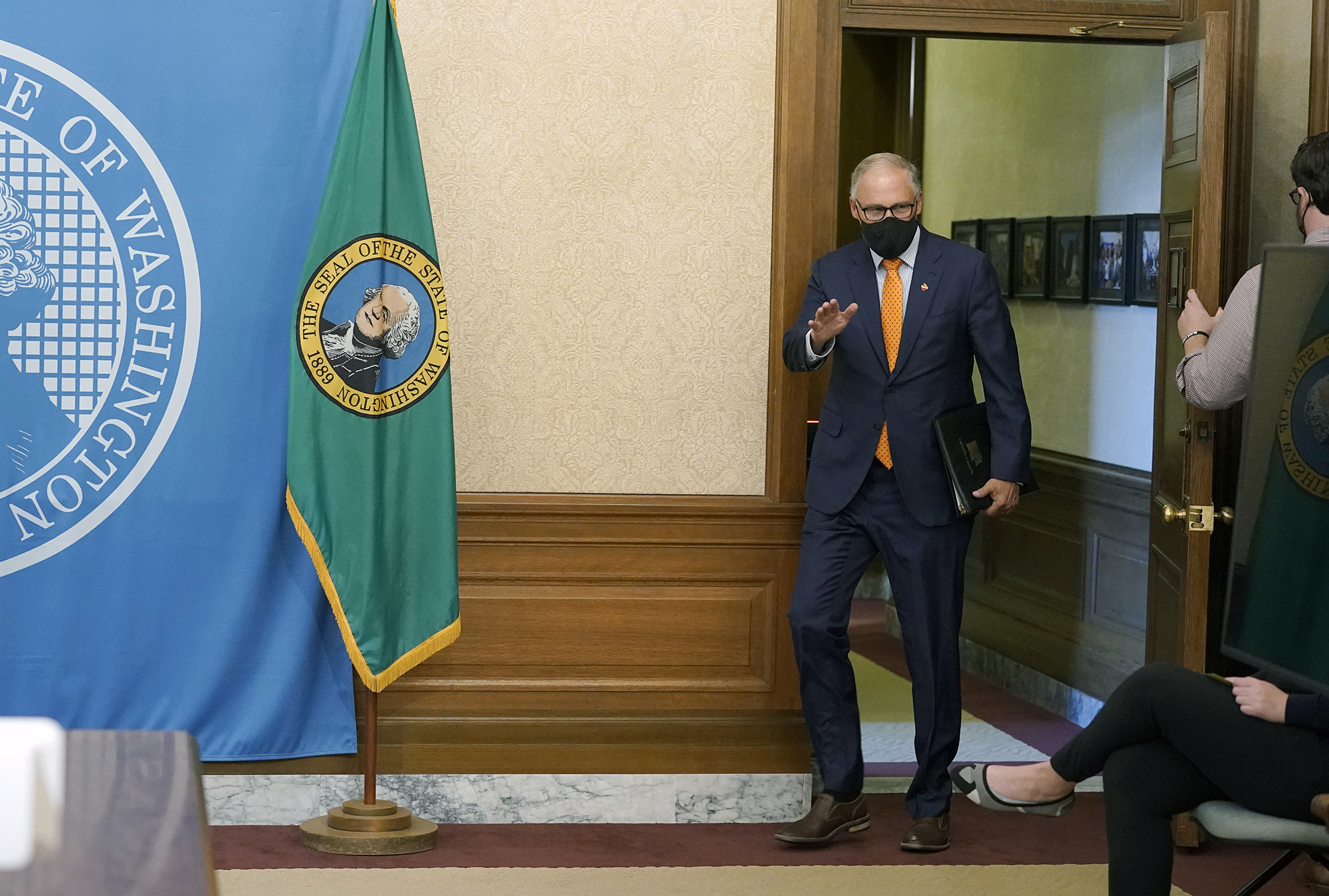 Washington Gov. Jay Inslee arrives to talk to reporters joining him remotely, Wednesday, Nov. 4, 2020, at the Capitol in Olympia, Wash., a day after he was re-elected to a third term as Governor. Inslee, a Democrat, defeated Republican Loren Culp. (Ted S. Warren/AP)

It appears the American people have narrowly rejected Donald Trump, turning the nation — possibly at the last possible moment — away from authoritarian white nationalism and back towards a more traditional moderate progressive path. The results for Washington state’s political system are not as dramatic, but they are significant, especially in terms of Washington’s relationship with the other Washington, and the future of our party system. And if you were ready for some peace and quiet, I’m sorry to tell you that the local political scene is about to heat up.

First, the basics. The 2020 election in Washington state changed very little. Jay Inslee cruised to reelection. The Democrats won every statewide office, other than secretary of state, as Republican Kim Wyman has once again survived. All our members of Congress who ran again were reelected. In the Legislature there are several close races, but as of Thursday evening there was virtually no change in the current makeup of either house. Those results may change slightly as more votes are counted, but not enough to significantly change the fact that Democrats will have big majorities in both houses.

Even as the ballot counting continues, the page is already being turned toward city, county and possible special elections next year. The presidential transition and the jostling for jobs and positions are underway. For months, observers have speculated about Inslee taking a job in the Biden administration, but there are many prominent, ambitious Democrats in Washington state, including senators, members of Congress and local officials. It is hard to imagine that none of them will be moving to the new administration — and movement will create more movement in the local political ecosystem.

The governor has not indicated that he is going to Washington, D.C., but imagine, for example, if Inslee does join the Biden administration. That would trigger a special election for the state’s top office, which could, in turn, affect the county and city races next year, and lead to another special election to fill the spot of whoever is elected governor. And Inslee is just one of the many Democrats who may be playing musical chairs. Washington state politics has been rather static, with veteran Democrats running for reelection over and over. That dam is now likely to break.

And that drama comes on top of the heat that is certain to arise from the races for Seattle mayor and city council as well King County offices in this era of heightened activism around social justice issues. The 2021 elections may be very noisy and very interesting.

The Democrats representing Washington state who remain in Congress will now have a friendly White House to work with. And our state will have one of the most powerful congressional delegations in America. Patty Murray is one of the most influential Democrats in the Senate; Maria Cantwell is a respected, experienced senator. On the House side, Adam Smith is the chairman of the Armed Services Committee, while Derek Kilmer and Pramila Jayapal lead the two largest caucus groups among House Democrats (Kilmer leads the moderate New Democrats, while Jayapal leads the Progressive Caucus).

What will this new clout yield for our state? To begin with, there will be no more attempts to deny federal funds to so-called “anarchist” cities like Seattle. The odds have greatly increased that federal aid will flow to local and state governments to help rebuild from the effects of COVID-19. Maybe our delegation can bring home some federal help to repair or replace the West Seattle Bridge. And President Joseph Biden will at least de-escalate the trade war with China, our state’s largest trading partner.

Finally, this election was a major step on the road to creating a new party system in Washington state. Republicans will try and tell themselves that this is just temporary, and that the pendulum will once again swing back. Well, the pendulum doesn’t always swing back. In 1993, I served in the state House of Representatives with 10 Democrats from Eastern Washington. The Democrats lost almost all those seats in the 1994 Republican landslide and have never gotten them back. Rural voters shifted and the shift has endured. Unless they move dramatically back toward the center and abandon Trump and his nationalist populism, Republicans face a similar collapse among college-educated white voters, particularly women, and especially in the suburbs. As I have written before, without the suburbs, Republicans are not competitive in Washington, and that creates a new party system here.

To a large degree, what really matters now is the conflict within the Democratic Party between progressives and moderates. In the 5th Legislative District (the Sammamish plateau), Mark Mullett, a very moderate Democratic senator, is locked in a close race with progressive Democratic challenger Ingrid Anderson. In the 11th District (South Seattle), moderate state Rep. Zack Hudgins lost his seat to a progressive. In the race for the open 10th Congressional District seat (Pierce and Thurston counties), moderate Democrat Marilyn Strickland defeated progressive Democrat Beth Doglio, who was endorsed by Bernie Sanders, Rep. Alexandria Ocasio-Cortez and Jayapal. These battles were tense, and that tension is going to carry over into the public policy arena.

One specific area where this will play out next year will be the struggle to balance the state’s budget. The state, still reeling from the economic consequences of the coronavirus pandemic, will face an enormous deficit — and unlike in Washington, D.C., Olympia must produce a balanced budget. Progressives will resist cuts and demand revenue increases, such as a capital gains tax. Moderates, fearful of a suburban backlash, will resist raising taxes. One-party rule will be an illusion in state government as the Democrats battle among themselves over the future of their party.

It will be interesting to see if Republicans and the business community will try to form a loose coalition with moderate Democrats. This tension is what drives California legislative politics, and could be our future.

American democracy has survived Donald Trump, but politics goes on. All elections bring change, some create long-term realignment. We are now living through that kind of political tectonic shift.