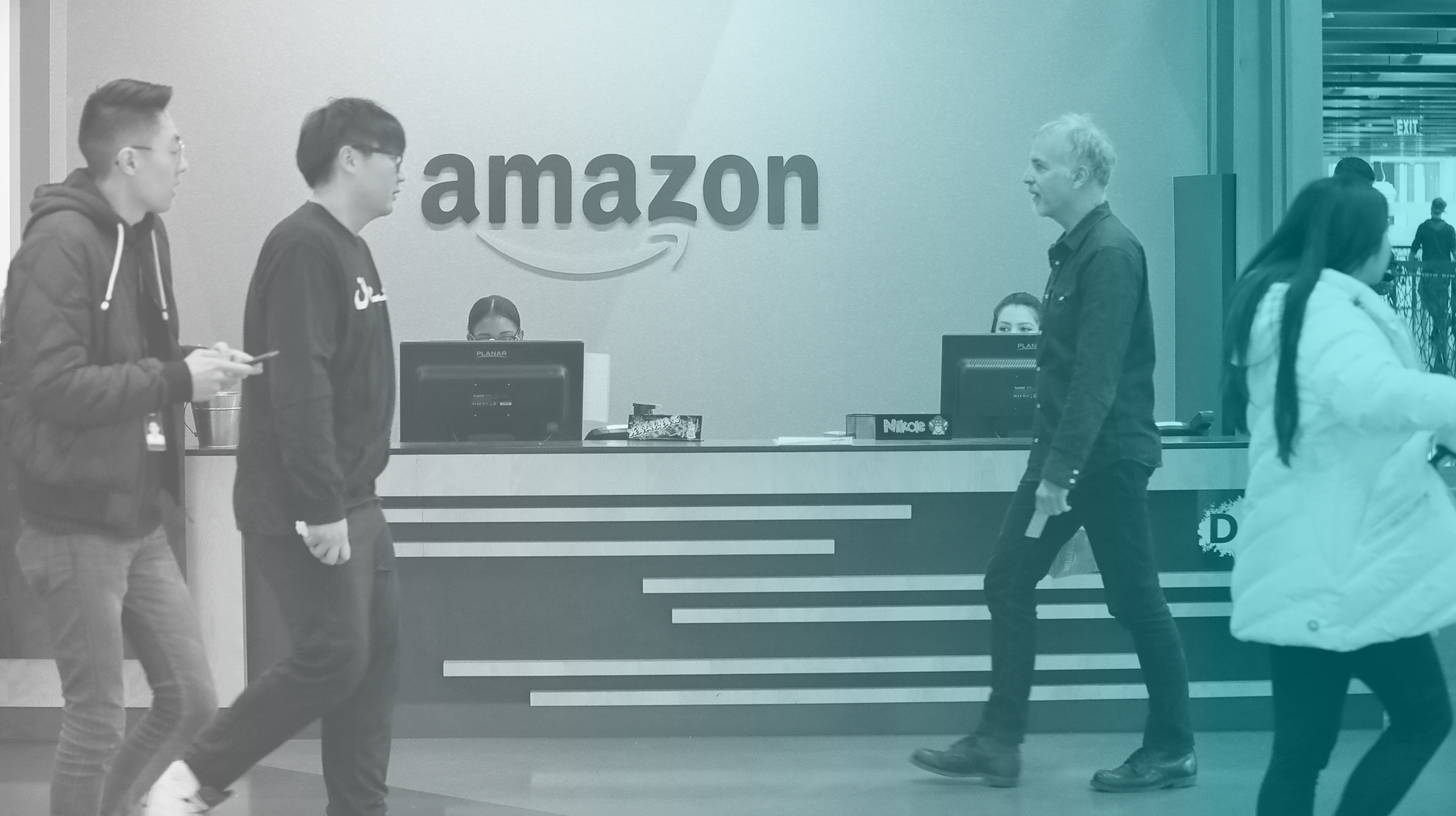 Employees walk through a lobby at Amazon's headquarters in Seattle, in 2018. Amazon has announced $2 billion in loans and grants to secure affordable housing in three U.S. cities, including a Seattle suburb where the online retail giant employs at least 5,000 workers. Amazon said it would give $185.5 million to the King County Housing Authority to help buy affordable apartments in the region and keep the rents low. (Elaine Thompson/AP)

Earlier this month, Amazon pledged $2 billion for affordable housing near hub cities Arlington, Virginia; Nashville; and Seattle. If you missed the news, you can be forgiven; arriving Jan. 6, it was quickly upstaged by images of legislators ducking for cover as Trumpies decked out in MAGA schwag, baffling costumery and Confederate flags stormed the halls of Congress. If Amazon’s PR department was hoping for a swell of public gratitude, the timing was unfortunate.

So let’s take a closer look. Amazon says the funds will “preserve and create over 20,000 affordable housing units.” The company’s initial commitment to the Puget Sound region? $161.5 million in loans and $24 million in grants to help the King County Housing Authority “preserve affordability for 1,000 apartment homes,” starting with three Bellevue buildings whose purchase was already underway.

How should we feel about Amazon’s sudden largesse?

First, to everyone who spent the last few years patiently (and not so patiently) connecting the dots between Amazon’s aggressive expansion and the housing crisis: Go team! This is your victory. The Bezos empire is feeling public pressure to be part of the solution. Organizing gets the goods.

Amazon is really rather late to the party. Two years ago, Microsoft announced a $500 million affordable housing initiative in the Seattle area, later adding $250 million more. Also in 2019, Google and Facebook pledged $1 billion each and Apple $2.5 billion to address the housing crisis in California.

Will all this money help? Sure. At the same time, despite dollar figures that sound enormous to us ordinary mortals, these corporate contributions are a drop in the bucket — of what Big Tech can afford, and of the need. Over the past decade, rents have climbed and lower-cost housing has been demolished to make way for market-rate development, while zoning restrictions keep supply tight. As a result, King County lost more than 112,000 units affordable to households below 80% of area median income. King County Councilmember Claudia Balducci has called our regional housing crisis an $18 billion problem.

If Amazon’s initial outlays in King County and Arlington are indicative, the great bulk of the $2 billion — over 85% — will be loans, not grants. (The earlier Big Tech infusions broke down similarly.) I don’t want to pooh-pooh below-market loans, which are clearly helpful in the expensive and byzantine world of affordable housing financing. But you have to admit it’s a neat trick, getting good publicity for handing out cash you will ultimately recover with interest. (Amazon, The Seattle Times reported, will charge 1.85% interest on the Bellevue loans.)

We’re also in a moment when corporations themselves have access to cheap money. Indulge me in a brief tangent: Since the 2008 financial collapse, the Federal Reserve has kept the federal funds interest rate very, very low. Add to that Trump’s massive corporate tax cut, which slashed tax revenue by $92 billion from 2017 to 2018. Many corporations used this windfall cash, along with low-interest loans and corporate bond issuances, not on productive investment or to pay their workers more, but on stock buybacks, a practice that used to be frowned on as market manipulation. When you realize that Apple, sitting on hundreds of billions in cash, also took on more than $100 billion in debt to fuel buybacks totaling $460 billion since 2012, that $2.5 billion for affordable housing starts to pale just a smidge. The optics of prioritizing stock buybacks during a pandemic are not great, but that hasn’t deterred Big Tech in the least. (Amazon, for the record and alone among its peers, has forgone buybacks and dividends, continuing to plow all available funds into world domination.)

Anyway. Some might see in Amazon’s focus on Bellevue a snub to tax-happy Seattle. I’m fine with that, honestly. Seattle’s new big business tax, which went into effect Jan. 1, is expected to raise well over $200 million annually. Starting in 2022 — as long as our state Legislature doesn’t throw a wrench into the works — $150 million of that will go to affordable housing and equitable development projects every single year. That’s pure cash, not loans. I think we’re getting the better deal on this side of the lake. Bellevue might want to start taking notes. (Disclosure: I and the organization I work for, the Transit Riders Union, were involved in advocating for a Seattle big business tax.)

As I’ve argued before, philanthropy won’t save us. We live in a society that systematically hands over our collectively produced wealth to a tiny minority, leaving the majority insecure if not struggling mightily to meet basic needs. And we’re supposed to be grateful for a little tax-deductible charity from our corporate overlords? Sorry, no. Tax ‘em, unionize ‘em, break ‘em up — there are many better ways to get the wealth flowing in the other direction. We might not always like how our governments spend money, but at least there are mechanisms for democracy, transparency and accountability that we can fight to improve.

That’s key for Elena Perez, organizing director at Puget Sound Sage, which advocated to direct funds from Seattle’s big business tax to Seattle’s Equitable Development Initiative. “This program was won by communities of color most impacted by displacement to purchase land and build capacity for community-led development,” she says.

Philanthropy, by contrast, leaves the reins of power firmly in the grip of the giver.

All that said, I hope this $2 billion really does secure 20,000 affordable homes, and I’m glad for the people who will live in them. I’ll close with some friendly advice for Amazon. If the company really wants to show goodwill, it should at least commit to revolving loans, reinvesting any funds paid back, including interest, into new affordable housing projects — or forgive the loans altogether. Make that $2 billion a true gift. But better yet, stop being a constant impediment to reforming Washington state’s upside down tax system. Be a team player! Just pay your taxes like the rest of us.