Look to the Northwest to understand the far-right mob in D.C.

The insurrection in the other Washington is part of a long tradition of extremist thinking in America. 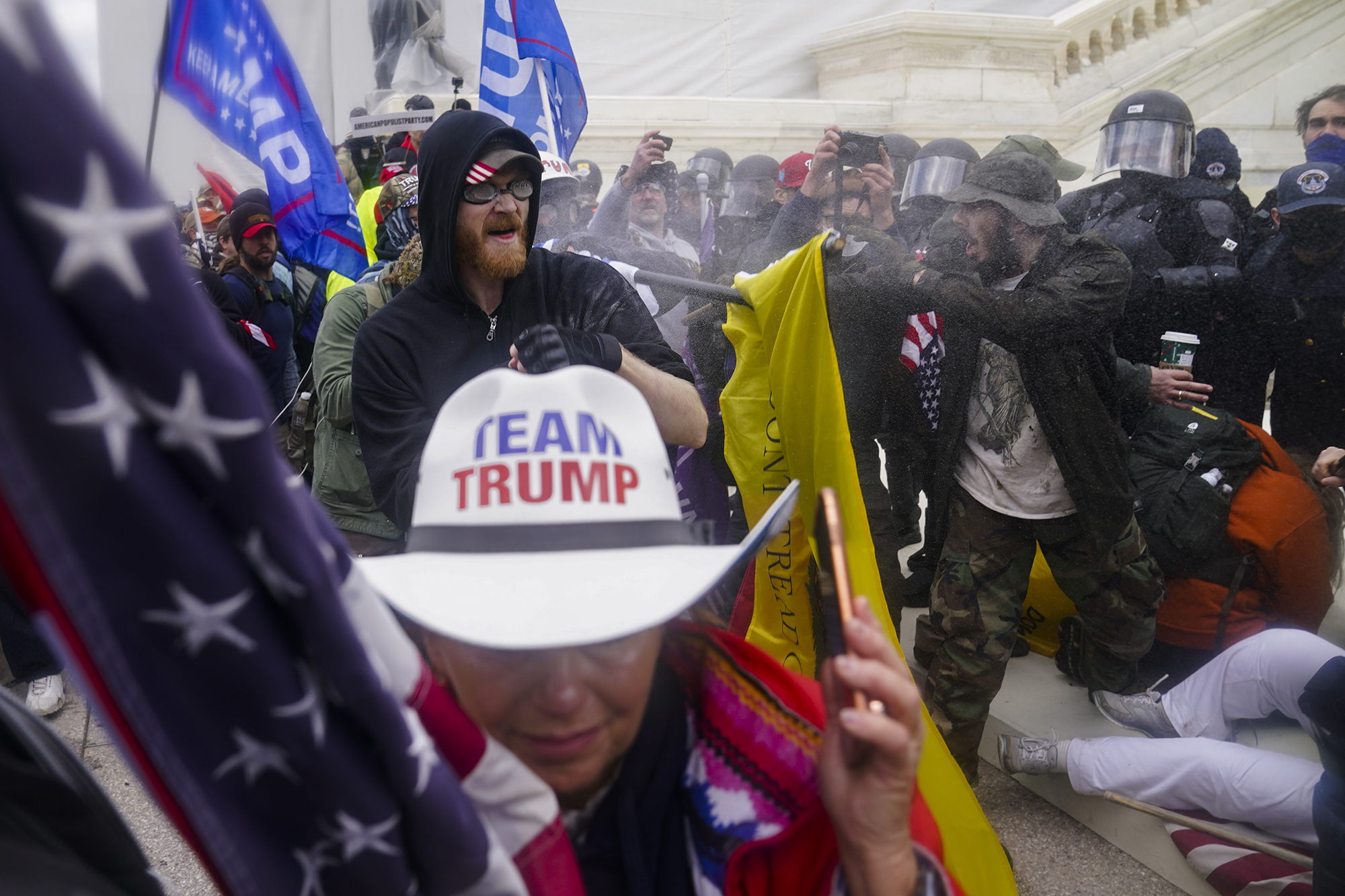 Trump supporters try to break through a police barrier, Jan. 6, 2021, at the Capitol in Washington. As Congress prepared to affirm President-elect Joe Biden's victory, thousands of people gathered to show their support for President Donald Trump and his claims of election fraud.(John Minchillo/AP)

The motto of the Washington Post is, “Democracy dies in darkness.”

Apparently, it can die in broad daylight, too.

Wednesday's attack on the U.S. Capitol by a Trump-supporting mob was not just predictable, but inevitable. It was promised. Its prime cheerleader, the most powerful individual in the world, President Donald Trump, has built a career smashing norms and violating laws in his self-interest, promoting division and soliciting assistance from foreign enemies.

That many of his followers would act out violently is unsurprising. His assault on democracy has been going on for more than five years; the well of anger and paranoia he has tapped has been around for a lot longer. If the attack on the U.S. Capitol was the most dramatic since the War of 1812, there have been plenty of other warning signs in the intervening centuries.

I have been researching and writing about far-right movements in the Pacific Northwest’s history for some time. If you are shocked by Proud Boys or pro-Nazi rhetoric, open support for white supremacy, armed militias and folks who believe in QAnon conspiracies, don’t be. We’ve been there before. It’s been with us right along.

I have written about one of Seattle’s early mayors, Beriah Brown, a newspaperman whose tolerance of slavery and secession, opposition to Reconstruction and likely aid to Confederate sympathizers working to undermine the Union during the Civil War in California was well known, as was his attempt to start an all-white colony in Mexico. His hatred of Lincoln was such that the day news of the president’s assassination reached San Francisco, Brown’s newspaper office was sacked and its contents burned in the streets. The militia was called in to prevent further rioting. Brown believed himself to be a free speech martyr; his critics called him a “treason shrieker.” Brown fled to the Pacific Northwest, where he reinvented himself in Seattle as a pro-growth civic leader who shed his questionable past, as many on the frontier did. He became respectable, his past all but forgotten or forgiven.

Another example of a national figure with a large Northwest footprint is William Dudley Pelley, a former Hollywood scriptwriter who had a near-death experience that led him to believe he was “America’s White King” and modeled himself on Adolph Hitler. He founded the Silver Legion, known as the Silver Shirts, the fascist equivalent of the Nazi Brownshirts or Mussolini’s Blackshirts. He was the original QAnon. Virulently anti-Semitic, he proposed rounding up Jews into “reservations” called Beth Havens, railed against President Franklin Roosevelt as a secret Jew — “Jewsevelt” — and exposed many Americans to anti-Semitic conspiracy theories. He said his plan for America was written in code in the Great Pyramid of Egypt and that he communed directly with Jesus; to support his anti-Jewish beliefs, he fabricated quotes by people like Benjamin Franklin.

In 1936, Pelley moved temporarily to Washington state to run for president on the Christian Party ticket and promised a revolution in America. One of his right-hand men, a Seattleite named Roy Zachary, promised the Silvershirts they would come to victory wading in blood. Pelley's followers built a log “temple” in Redmond and he barnstormed the West in an auto caravan. A crank? Surely. A harmless one? Hardly. Pelley’s militant legion of armed followers was finally perceived as a threat as World War II approached. He was tried and convicted of sedition and jailed during the war and not released until the 1950s.

But his legacy on the far right is extensive, having helped inspire postwar right-wing groups like the Minutemen, Posse Comitatus, John Birch Society and Aryan Nations.

Pelley was not the only one to wrap his fascism in American patriotism. The German-American Bund supported Hitler’s agenda in the U.S. and had a militant, armed wing. It famously rallied at Madison Square Garden in New York with American flags, swastikas and a giant banner of George Washington. It opposed communism, but in fact it aided and abetted Hitler’s regime. The Bund’s speakers came to Seattle where followers extended the Hitler salute and sang the “Horst Wessel” song, the anthem of the German Nazi party.

Locals assisted German consulates in Seattle, Portland and San Francisco, where representatives of the Third Reich were stationed. Business leaders and members of the German American community squired visiting members of the SS, Gestapo and even Hitler’s inner circle to prestigious local social clubs and on sightseeing tours of the region. The Nazi flag, with its giant, central swastika, was allowed to fly periodically in those cities from the local consulates. The Bund claimed to be an all-American organization with 200,000 members in the late 1930s and to pose no threat to America — in fact, it claimed to be hyper-American. The Portland newspaper, The Oregonian, questioned members’ loyalty: “Can any American of German origin live up to his oath of allegiance to Uncle Sam and raise his arm in a Hitler salute at the same time?”

Why do I believe it is important to examine this history? Because active forgetting is a useful tool for those who want to thwart democracy, bury the past and hide uncomfortable truths. Beriah Brown counted on frontier forgiveness to escape his role in the Civil War period. In the 1930s, Pelley was considered to be of marginal consequence, but he wrote the playbook that the extreme right has been using ever since, consisting of false conspiracies, anti-Semitic and racist memes, and a fervent belief in an America for white Christians only. Nazi sympathizers, though some were imprisoned, interned or deported, were less criticized for their ideology than for their alliance with America’s enemies. After Pearl Harbor, their cause evaporated, but American fascism flourished in pockets from the Pacific Northwest to Charlottesville to the Oval Office. It’s entirely predictable that Trump’s volunteer mob would invade the Capitol and terrorized Congress.

These figures are the ideological descendants of a long tradition of American thinking that seeks to paint its pictures in blood and smoke, who wave Confederate flags while claiming patriotism. A YouGov poll revealed that 45% of Republicans think the storming of the Capitol was justified. We need to stop comforting ourselves that these acts, or the street corner Nazi or the radical-right bomber who perpetrate them, are merely products of the disaffected or disturbed. Rather, as we've been told for over a century, they are a movement that, finally, attained the highest power in the land, and must be reckoned with even after Trump has left office.