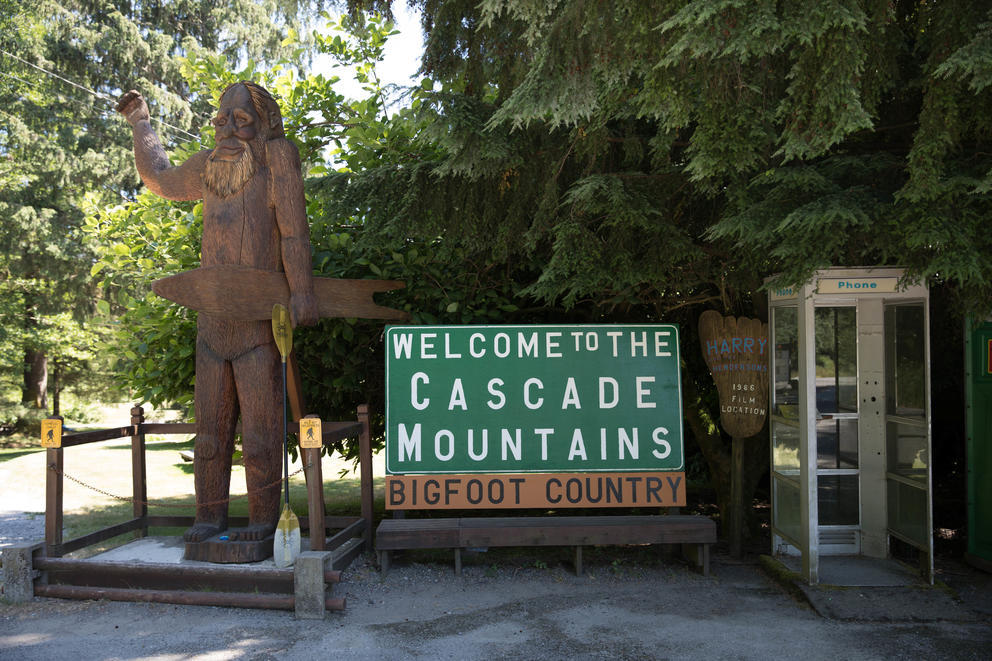 The lore of Bigfoot runs deep in the Pacific Northwest. Snohomish County is known for its history as "Bigfoot country." (Matt M. McKnight/Crosscut)

If I were Bigfoot, I’d consider suing for libel.

That was my thought after reading the new horror novel, Devolution: A Firsthand Account of the Rainier Sasquatch Massacre, by Max Brooks, author of World War Z, a “history” of the Zombie War.

Brooks is a novelist and a senior fellow at the Modern War Institute at West Point. The new book reflects a kind of thinking that pervades the minds of those whose job it is to strategize about counterinsurgencies, asymmetric warfare and terrorism, or who otherwise believe they are defending civilization from savage Others.

There are other people preparing for “zombie” attacks, too: survivalist preppers and rural militias who await the collapse of civilization and the invasion of urban hordes, climate refugees, Black Lives Matter protesters and antifa. This paranoid mindset is familiar in the Pacific Northwest, where rural areas are considered by some to be the “last redoubt” of liberty and the "white" race.

In Devolution, a natural disaster puts humans and Sasquatches on a primal collision course. It gets ugly.

The action is mostly relayed by the fictional diary of a woman who joins an intentional community, near Mount Rainier, full of the kind of people Brooks might know from Hollywood cocktail parties (Max is son of comedian Mel Brooks). The enclave, called Greenloop, is overseen by an idealistic couple who are into tech, sustainability and “eco-capitalism.” Solar panels abound and community energy is produced by the inhabitants’ own poop. It is populated by folks who are mostly helpless without Siri to guide them, or the wisdom of a Ted-talking author of a book on Jean Jacques Rousseau that argues humankind is innately lovely, but has been corrupted by civilization.

Nature triggers a crisis, however. Mount Rainier erupts — a real life eventuality — and cuts Greenloop off. Lahars pour down and bury the surrounding valleys, cover roads and take out bridges. Puyallup, Orting and Tacoma are devastated. Food shortages ensue, Seattle sinks into civil unrest, and an opportunistic Interstate 90 sniper has a field day feasting on the chaos. It’s a lot worse than merely running out of toilet paper.

Most of that action is off-screen, so to speak, because we are stuck in Greenloop, as its inhabitants who are spared the brunt of the eruption try to cope with their isolation and wait for rescue efforts that won’t reach them until who knows when — and winter is coming. Their circumstances are similar to pandemic lockdowns of the last year, a kind of involuntary quarantine. The fact that they aren’t preppers comes back to haunt them.

These people, accustomed to having their groceries delivered by Amazon drones or vans, soon discover they are short on food. They have yoga mats and works of philosophy, but no how-to books or guns for hunting game. Secret stashes of gummies and ice cream will go only so far.

While most Greenloopers dither, up steps the community’s resident glass artist — every Northwest community has one, right? Her name is Mostar, a tough no-nonsense woman from, we eventually learn, Bosnia who’s seen a thing of two. She is a survivor. She begins to herd and order people into preparing for food rationing, starting a garden and obtaining the means to defend themselves against whatever nature might throw at them. A scary incident with a hungry cougar splits the community in two: those who think they can coexist with the wild in a friendly way, and those who know danger lurks in the forest, especially when animals are stressed by post-eruption conditions.

Before long, the Greenloopers come under attack from a band of displaced Sasquatches who begin to steal their food and test their strength. Brooks’ take on Bigfoot is the opposite of the Harry and the Henderson’s idea of a shy, friendly forest critter that befriends a family, or the vaguely spiritual presence some find in the Sasquatch mythos — a kind of shape-shifter that might exist between worlds. Part of the fascination with Bigfoot is the speculation that they are rare and also might possess relatable human qualities. It is impossible to see large apes in the zoo and not see and feel our deep genetic connections.

Instead, Brooks skips over any humanity and paints these Sasquatches as animals — wild, violent, driven by hunger. (Bigfoot is not a vegetarian.) Brooks extrapolates from early white settler accounts of Bigfoot throwing rocks or mysterious, violent deaths in the forest and lays them at the big feet of Bigfoot. Was a carcass once found in the woods torn to shreds? Was a lone woodsman found with his neck broken while sitting by his campfire? Brooks' enigmas are like rage-filled chimps driven by the need to survive. Killing and eating humans is just filling a primal need. Brooks peppers the book with quotes about bad primate behavior.

Thus, Greenloop becomes the Alamo for the soft urban elites who seek solace in nature and sustainability without planning for nature's violence. The mini-Ecotopia unravels quickly as its residents must become, with Mostar's guidance, spear-bearing warriors to confront the threat of hostile, large, hairy, smelly and violent apes.

The couple leading Greenloop retreat in the face of adversity. Their home is trashed by the invaders who smash their iPhones and wine glasses and toss copies of Forbes and Wired magazines featuring images of Greenloop's founder around the living room. The community is weakened by rot from the head down due to a combination of techno-optimism and facile nature-worshipping. Bigfoot’s violence owns the libs.

Brooks seems to be asking us to look at our leaders for muscular pragmatism and a willingness to do whatever it takes to exterminate an existential threat. Down and dirty wins. Talking? Communicating? Empathy? Diplomacy? Bigfoot is merely an animal that wants to rip off your head before it devours you.

Sadly, Bigfoot gets virtually no understanding. They're the Jaws shark with fur and a kind of tribal unity. The Greenloopers are compared to the buffoonish Grizzly Man of movie fame (a Californian, of course), who lived among Alaskan brown bears and spouted feel-good nonsense while filming himself before he was eaten by one of his bear “friends.” Are we fools for thinking we can live by the rules of civility when we live among creatures who are by nature predators, including fellow primates?

And what then does that say about our place in the world with other humans? What is the takeaway for West Point cadets, soldiers or law enforcement officers that Brooks influences? The plot brings to mind how Native peoples were regarded by settlers, or Black protesters are regarded today by law enforcement: more animal than human. For all of Bigfoot’s apparent possible humanity, which Brooks neglects or overlooks, in this story Bigfoot challenges our own entitled place in the world. We must fight back viciously if we are to live. In striving for survival, Greenloopers “devolve” into a survival mode of equal brutality. The “fittest” seem to be those most willing to inflict violence.

If the message is that nature isn’t always pretty, that’s certainly known to those who experience the outdoors more than the grab-a-selfie set. But there’s a message for society’s “warriors” that is concerning. A blurb on the Brooks’ book from Tom Ridge, the former head of the Department of Homeland Security, is chilling: “I wish we could elevate the national dialogue on public safety to a level of tone and focus that Max Brooks has demonstrated for all of us.”

To me, that tone and focus seem like a violent video game. Ridge’s takeaway might be the scariest thing about this horror story: The world is out to get us, and it’s not just zombies anymore. Do your worst at the first sign of threat and you will be safe.