On human rights, Amazon is at a crossroads

The tech industry has a dismal history on labor practices and human rights. Can Amazon take the road less traveled? 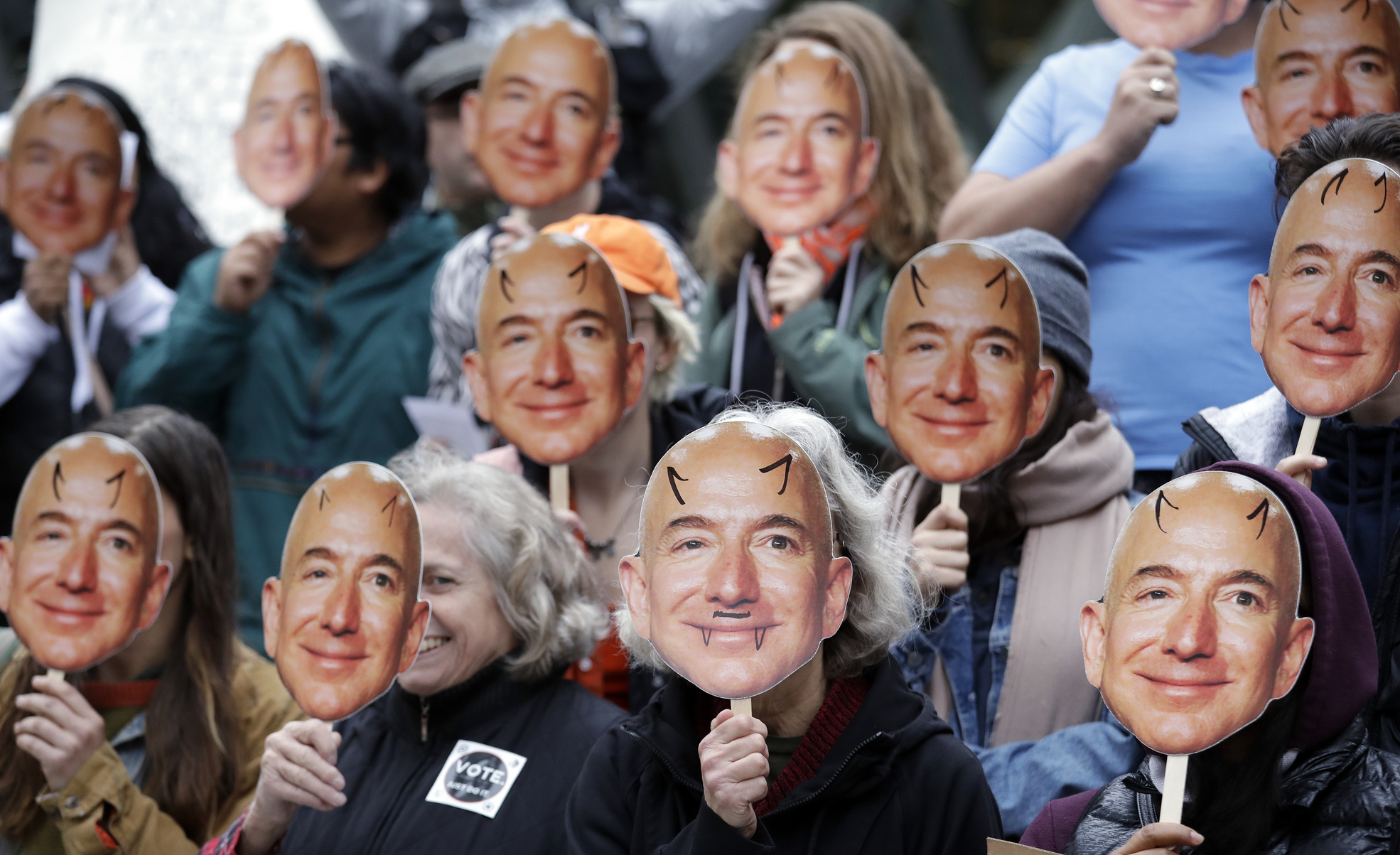 Demonstrators hold images of Amazon's Jeff Bezos over their own faces during a protest at Amazon Seattle headquarters over the company's facial recognition system, "Rekognition," Oct. 31, 2018. (Elaine Thompson/AP)

In 2018, Amazon heavily marketed Rekognition, its facial recognition software, to Immigration and Customs Enforcement, or ICE, and the Customs and Border Patrol, touting its ability to detect a range of human emotions such as “fear” and “anger.” Activists worried that Amazon was providing the U.S. government with technological infrastructure to further the aims of a brutal deportation and detention system — one that was already separating families and terrorizing immigrant communities.

A year later, the Jewish peace group Never Again Action highlighted a difficult history not taught in most schools, while linking Amazon’s practices directly to the tech industry’s record of supporting human rights abuses. In a 2019 protest of the company’s actions, the group organized a march from a Holocaust memorial in Boston to the Amazon offices in Cambridge, Massachusetts.

“[W]e’ve seen this before,” said protester Ben Lorber, “I had ancestors killed in the Holocaust.”

As a relatively new tech company, Amazon is at a crossroads. Will the company travel down a familiar road taken by other tech behemoths who turned a blind eye to human rights and workers’ rights? Or will it opt for the unfamiliar path, refusing to sell its technology and services in support of human rights abuses while also taking a strong, affirmative stance for better workplace conditions and greater diversity within its ranks? In large measure, this decision will fall to the incoming Amazon CEO Andy Jassy. Lorber and many others are pleading and protesting for the road less travelled.

In the spring of 2020, bowing to pressure from its rivals IBM and Microsoft, Amazon announced it would cease selling Rekognition to law enforcement agencies, but only for one year. The end of that year is coming up. In December, the New York State Common Retirement Fund, a large institutional shareholder, along with the Vermont State Treasurers Office, jointly filed a proposal calling on the world’s largest online retailer to curtail surveillance technologies like Rekognition.

But that investor proposal went further, asking Amazon to curb hate speech, increase diversity and improve workplace conditions. It was eerily prescient. Only several weeks later, the insurrection at the U.S. Capitol showed Amazon had provided a safe haven for white nationalists to spew hate, organize and even plan their attack. By the time the social media platform Parler, used by many white nationalist groups, was taken down from the Amazon Web Services cloud, the damage had already been done.

Meanwhile, workers at the company's warehouses continue to endure unjust labor practices. During a pandemic, when so many have turned to Amazon, these workers bear the brunt of increased demand without adequate protective equipment and working conditions to shield them from the virus. Many Amazon factory workers come from communities of color already ravaged by COVID-19.

“Amazon has said it stands with the nationwide movement to identify and bring an end to systemic racism, yet it continues to face claims of racial discrimination,” said a disappointed Thomas P. DiNapoli, New York state comptroller and trustee of the New York retirement fund.

Instead of welcoming this opportunity, Amazon appealed to the Securities and Exchange Commission to block these proposals from being voted on at its upcoming shareholder meeting. It’s a strategic blunder and a tone-deaf response to attempts aimed at preventing the company from tragically following in the footsteps of another high-tech giant.

In the late 1920s, IBM, a newly minted company, and its audacious president, Thomas J. Watson Sr., threw its technological prowess behind the eugenics movement. Eugenics sought to further reproduction of blond, blue-eyed, fair-skinned individuals — the so-called “Nordic stock” — while eliminating the bloodlines of undesirables such as Blacks, Jews, Native Americans, Hispanics, the Irish, Italians, mixed-race individuals, LGBTQ+ people and the mentally and physically ill.

A major 1926 study by the Eugenics Record Organization on the island of Jamaica was at risk because eugenicists had no way of tabulating and reporting on so-called “pure blood” Europeans and their mixed-race offspring, whom together numbered in the millions.

IBM engineers worked with the Eugenics Record Organization, headquartered in Cold Springs Harbor, New York, to design punch card formats for collecting, sorting, tabulating, printing and storing information on racial characteristics, allowing the organization to declare the Jamaica study a success in 1929 and announce plans for another, similar global project.

Four years later, Watson and IBM brought automated racial classification to Hitler and the Third Reich. Nearly every aspect of the Holocaust and the Nazi war machine was supported by punch card technology, courtesy of IBM. Each concentration camp had an IBM room, where punch cards held prisoner’s fates, down to the means of their extermination — firing squad, gas chamber, oven or being worked to death.

With Germany’s defeat, IBM turned next to South Africa, automating most aspects of apartheid. The company even designed specialized equipment to print the “Book of Life” passbook, carried by white and Colored South Africans, and the dreaded national identification card, which Black South Africans were forced to show on penalty of arrest. Then, after apartheid, IBM’s use of technology to circumvent human rights returned to American soil. In 2005, the company used secret CCTV footage of unwitting New Yorkers collected by the New York City Police Department to improve facial recognition technology in order to discriminate based on skin color.

So when protesters in Boston said they had seen this before, they were deliberately connecting Amazon’s present to IBM’s past, pleading that Amazon not repeat the mistakes of a previous generation. Some shareholders understood this and took up that call as well.

BWA leaders were targeted with poor performance evaluations, denial of pay raises, accusations of violating company policy by disclosing pay and promotion data and, in one case, false allegations of sexual abuse. Many were fired, demoted or forced to resign.

On Friday, the National Labor Relations Board ruled against Amazon, allowing workers at a Bessemer, Alabama warehouse to vote on unionizing. The SEC should follow suit and insist that shareholder proposals are also brought to a vote.

Jeff Bezos may be stepping down as Amazon’s CEO, but the problems identified by workers, protesters and shareholders remain. Martin Luther King Jr. said, “the time is always right to do right.” Yet companies like Amazon seem to operate as though that time never arrives; that profits are always more important than people, even in the wake of George Floyd’s death and calls for racial equity, synagogue attacks, four years of official lies supporting racial hatred and division and an insurrection at the U.S. Capitol. King said it best. Now is the right time for Amazon to do right.