How we should deal with Dr. Seuss books and cancel culture

The fight to ban, topple and rename racist artifacts of our past has been an issue in Washington state, too. 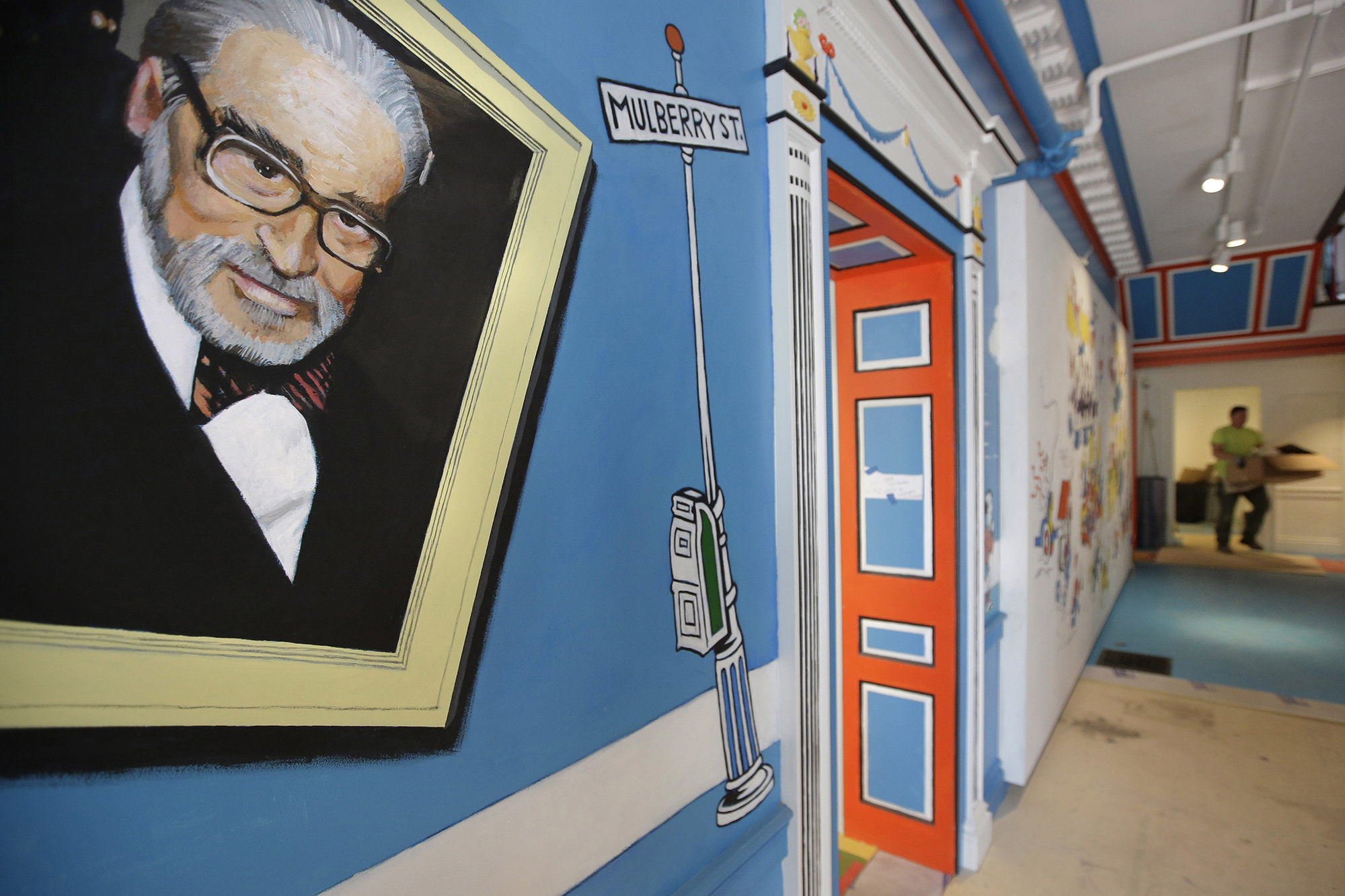 A mural that features Theodor Seuss Geisel, also known by his pen name Dr. Seuss, covers part of a wall near an entrance at The Amazing World of Dr. Seuss Museum, in Springfield, Mass., May 4, 2017. Dr. Seuss Enterprises, the business that preserves and protects the author and illustrator's legacy, announced on his birthday, Tuesday, March 2, 2021, that it would cease publication of several children's titles including "And to Think That I Saw It on Mulberry Street" and "If I Ran the Zoo," because of insensitive and racist imagery. (Steven Senne/AP)

I Had Trouble in Getting to Solla Sollew by Dr. Seuss features a character marching up a hill, carrying a bat, proclaiming, “And I learned there are troubles of more than one kind. Some come from ahead and some come from behind.” Recently, Dr. Seuss’s troubles came from behind. Dr. Seuss Enterprises, the company that oversees and curates the late author Theodor Geisel’s books, announced on March 2 that it will no longer publish six titles because of their racist and offensive imagery. That announcement ignited a firestorm of criticism and recrimination about “cancel culture.”

Donald J. Trump Jr. warned that cancel culture was coming after the revered Dr. Seuss. House Minority Leader Kevin McCarthy, R-California, published a Twitter video of himself reading from a Dr. Seuss classic, Green Eggs and Ham, not one of the delisted books. (McCarthy was slammed for performing a political stunt in the midst of Congress working on a $1.9 trillion COVID relief bill.) Both McCarthy and Trump blamed Democrats for canceling Dr. Seuss books, although Democrats had nothing to do with the decisions made by the author’s estate.

Underneath this political wrangling, a legitimate question remains: What should be done with books containing racist images and language, monuments to racist figures and buildings named after racists? In the wake of George Floyd’s killing and protests for racial equity, many activists say ban the books, topple the monuments and rename the buildings. Meanwhile, opponents like McCarthy and Trump counter: Leave them alone; they’re part of our nation’s history. Both sides are right, and both wrong. The past provides important lessons we risk losing when we ban, topple or rename, if we don’t also replace.

In 1936, Geisel was returning with his wife by sea from Europe, when the rhythm of the ship’s diesels inspired a poem that became And to Think That I Saw It on Mulberry Street, Geisel’s first children’s book. Mulberry Street also contained racist imagery of Asians, which landed it among the six books his estate decided to no longer publish.

During that same year, concentration camps at Dachau and Sachsenhausen were operating as part of Hitler’s plan to exterminate Jews. Who would have faulted postwar Germany for tearing down these camps? Yet I cannot imagine being unable to walk their haunted and hallowed grounds. You can read about the Holocaust and watch films depicting its horrors, but nothing compares with walking inside Dachau’s iron gates, for example, past the actual gas chambers, ovens and walls against which Nazi guards shot Jewish inmates.

Africans, weary of slavery, could have demolished the Elmina Slave Castle in Ghana. But that would have deprived me, and the rest of the public, of walking on the rusted remains of slave chains in the castle’s dungeons. Even though I have read extensively about the history of slavery, I was changed forever when I experienced that history underfoot.

We need visceral reminders of past wrongs, like Dachau and Elmina, so we can learn from them, and so these wrongs will not be repeated in the future.

Washington state is no stranger to this controversy. Native Americans and their supporters have waged a decadeslong effort in Vancouver, Washington, at Columbia River High School to change the school’s mascot from the “Chieftain,” and reform other practices that slight American Indians, like the use of the “tomahawk chop” by sports teams and their fans. In 2015, the U.S. Board on Geographic Names agreed to change Coon Lake and Coon Creek in the North Cascades to Howard Lake and Howard Creek, after an early Black settler in the area. Even the Sierra Club is reckoning with the racist legacy of its founder, John Muir, and his support of the eugenics movement.

When I moved to Washington state in 1989, I was horrified on a return from Canada that the first monument I passed, even before the Peace Arch, was a tombstone-shaped slab of granite marking old State Route 99 as Jefferson Davis Highway, in honor of the president of the Confederacy. It bothered me that America would welcome foreign visitors and returning citizens onto a highway named after a man who led secession and fought to preserve slavery. In 2002, then-state Rep. Hans Dunshee of Snohomish began a fight that ultimately resulted in the monument’s removal, and the renaming of Highway 99 to the William P. Stewart Highway, after a Black Civil War soldier buried in Snohomish.

I’m happy the monument is gone and the highway renamed. But I’m not happy that the monument was ultimately returned to the Sons of Confederate Veterans Pacific NW Division, for relocation to Jefferson Davis Park, a controversial private park in Ridgefield, in Washington’s Clark County, and nothing was erected in its place. Can you imagine if a new monument had been constructed, maybe even surrounding and eclipsing a replica of the original? And what if on this new monument a visitor could read both an explanation of who Jefferson Davis was, and words to the effect, “This old monument remained in place for 60 years. The U.S. Parks Service demolished it and erected this new monument to remind all who enter the United States that this country does not stand for the oppression or subjugation of individuals based on the color of their skin”? It brings tears to my eyes imagining such a strong statement of commitment to dismantling systemic racism. But, unfortunately, no such replacement monument was erected, nor statement made.

It’s not too late to do something similar with the Dr. Seuss books. Keep them in print but include a preface that explains more about Geisel and what he got terribly wrong with his racism, anti-Semitism and xenophobia. Maybe even add on the books’ cover a simple but obvious warning message to parents and readers that they should consult this preface before reading the book. Perhaps the preface might also include some guidelines for having a discussion with children about racism.

Chuck Robinson, past president of the American Booksellers Association, and former owner and co-founder of Village Books in Bellingham, said this about the Dr. Seuss books: “I’ve always believed that bad speech is best counteracted with good speech. I think this was a teachable moment and that we do a disservice to kids who could have learned something about our history.”

That determined Dr. Seuss character, walking up the hill, concluded, “But I’ve brought a big bat. I’m all ready, you see. Now my troubles are going to have troubles with me!” Speaking of “cancel culture,” that character could have added, “And if we don’t think deeply, if we don’t think fast, lessons from our troubles, will vanish from our past.”

Correction: An earlier version of this opinion column misattributed a quote to "Cat in the Hat." It has been updated with the correct book.