Gun violence is a public health crisis in communities of color, and the Second Amendment has roots in slavery. 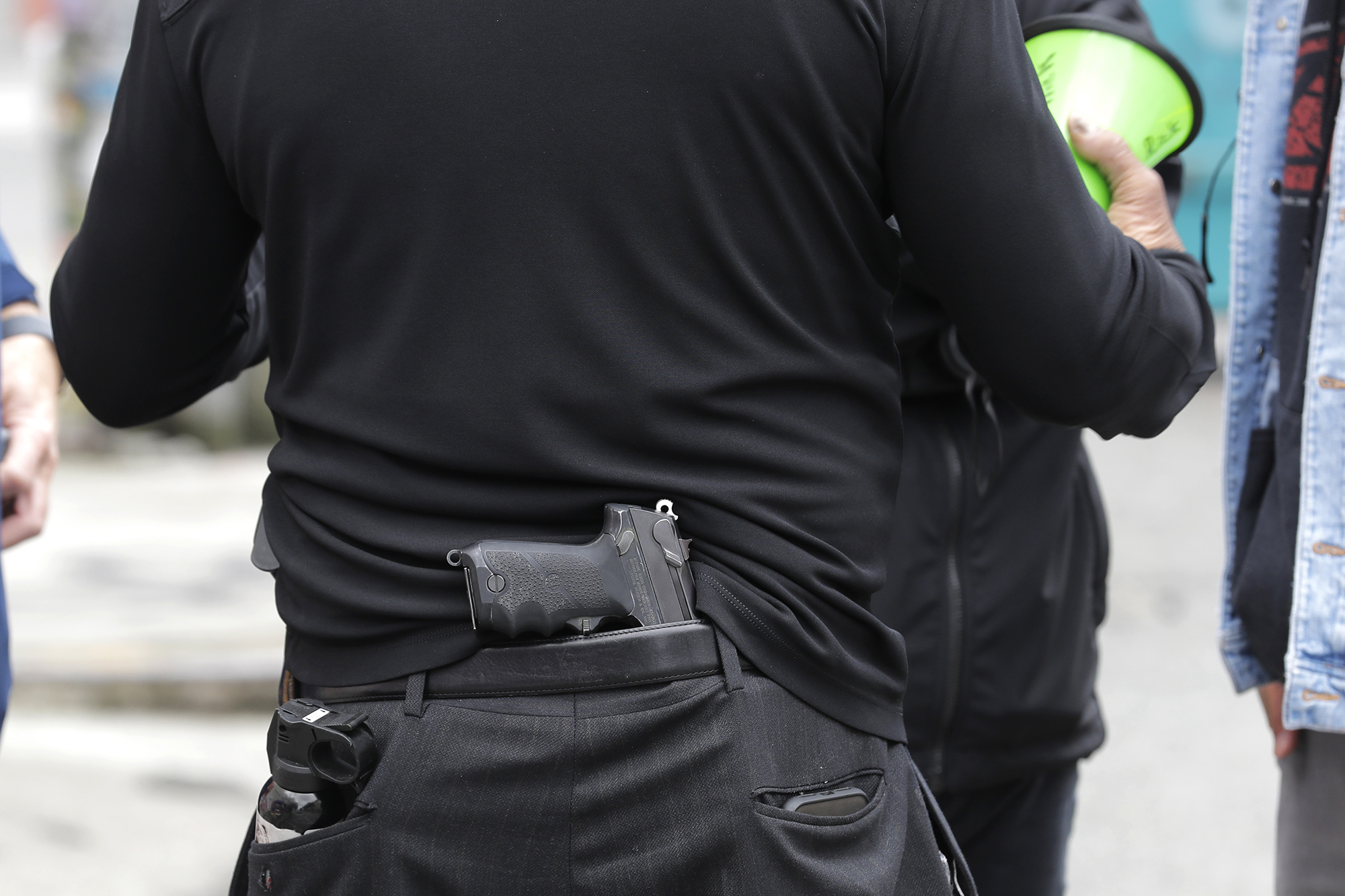 A handgun is tucked into a waistband of a person walking through downtown Seattle. (Ted S. Warren/AP)

The year 2020 saw a historic rise in gun violence across the nation, and Seattle was no exception. Last year, 52 city residents were killed, compared with 35 in 2019, an increase of almost 50% and the highest rate in 26 years.

Just like COVID-19, gun violence disproportionately affects communities of color. In January, Adrian Diaz, Seattle’s interim police chief, noted that 60% of 2020 homicides were committed with a gun; that most homicide victims were males between 18 and 50 years old; and that nearly 50% of homicide victims were Black. Even before the onset of COVID-19, data from the Centers for Disease Control and Prevention show increased gun violence disproportionately affecting Black and Indigenous communities. All this points to gun violence as a public health crisis in communities of color, and should push lawmakers in Washington state to pass three sensible gun control measures working their way through the Legislature.

Collectively, the proposed legislation seeks to modestly reign in gun violence. Senate Bill 5078 would ban “high-capacity magazines”; SB 5038 would ban “open carry” of weapons at demonstrations and the state Capitol; and SB 5217 would ban “assault weapons.”

These important and necessary measures are but the first steps toward curbing gun violence. But “gun control” is not mentioned anywhere in Gov. Jay Inslee’s policy brief on diversity, equity and inclusion. Nor are any of these bills part of his “racial equity” legislative package. They all should be.

Since this summer’s historic protests against police violence, there has been a frightening increase in bearing arms among communities ordinarily the victims of gun violence. Membership in the National African American Gun Association, for example, grew by nearly 15,000 people in the first half of 2020. Not surprisingly, during this same period, firearm sales surged among Black men and women, leading one industry leader to remark, “Bottom line is that there has never been a sustained surge in firearm sales [by African Americans] quite like what we are in the midst of.”

This summer, armed Black men and women from such groups as the Minnesota Freedom Fighters, the Not F**king Around Coalition and Black Guns Matter began appearing with increasing regularity at Black Lives Matter protests in Minnesota, Kentucky and Georgia. Each group has a slightly different mission, ranging from firearm education to militant resistance against the state. But regardless of their distinct aims, these groups introduce more firearms into an already volatile situation, and that’s a recipe for more violence, not less. The answer to gun violence lies not in increased gun ownership, but in decreased gun ownership across the board.

“When I hear ‘unarmed Black man,’ I’m sad,” said Maj Toure, founder of Black Guns Matter, in an interview with Business Insider, in reference to unarmed Black men who have been shot and killed. “I believe that more Black people would be alive if they were armed.”

Toure didn’t make clear whether he was speaking about Black victims of police violence, like George Floyd, or Black victims of civilian violence, like Ahmaud Arbery, but his implication is clear: The greater potential to take life leads to a greater possibility to preserve it. And the tool of preservation: The gun. That may have held true in bygone frontier days, but in a modern society, it’s simply tortured logic.

Like Toure, I am saddened by the killing of unarmed Black men and women. Yet, unlike him, I fervently reject that arming more individuals with guns is the appropriate response to gun violence.

But the reason all Americans, including these armed Black groups, should reject gun ownership goes far beyond the statistics on gun deaths or the superficial arguments asserting a Second Amendment right to bear arms. When I hear Black Guns Matter members proudly proclaim that, “All Gun Control Is Racist,” or the National Rifle Association suggest that more teachers should be armed to prevent school violence, I also hear Sam Cooke crooning, “Don’t know much about history.”

The Second Amendment is deeply rooted in America’s racist past, and fundamentally connected to the killings of George Floyd, Breonna Taylor and others. But to make this connection, one must be a “strict constructionist,” someone who looks beyond the Constitution’s written word to the underlying motives of the founders.

At the Second Constitutional Convention in Philadelphia, in 1787, Southern delegates were fearful the U.S. Constitution they were drafting would restrict their right to own, sell and transport slaves. In response, Northern delegates crafted a document in which nearly one-quarter of the clauses appeased the slaveholding South, and the words “slave” or “slavery” never appeared. The Second Amendment was key among these appeasements.

Patrick Henry, a Virginia slaveholder, opposed ratifying the Constitution, fearing it would cede state control of slave patrols (politely called “militias” by the founders) to the federal government. James Madison, favoring ratification, said in a debate with Henry, “If the country be invaded, a state may go to war, but cannot suppress insurrection. If there should happen an insurrection of slaves, the country cannot be said to be invaded. They cannot, therefore, suppress it without the interposition of Congress.”

Take either side, Henry’s or Madison’s, local or federal, and the same fundamental issue remained: preserve slavery at all costs.

When the NRA, white militia groups and Black gun organizations use the Second Amendment as the basis for claiming their right to bear arms, they are also affirming the racism from which this amendment emerged.

Reread the terse wording of the Second Amendment: “A well-regulated Militia, being necessary to the security of a free State, the right of the people to keep and bear Arms, shall not be infringed.” Now substitute “slave patrol” for “Militia” to understand the real intentions of the founders.

As part of his “racial equity” legislative package, Inslee implicitly acknowledges this history when he seeks to curb the excessive use of force by the police, which has origins in the slave patrols of the 18th and 19th century. Likewise, the governor is taking on a similar history, with help from Insurance Commissioner Mike Kreidler, in his efforts to dismantle systemic racism in the insurance industry.

In both examples, Inslee is rightfully responding to public protests and clarion calls for an end to racial inequity. He should do the same with gun control legislation, like that proposed in the three Senate bills now up for consideration, by including them in his “racial equity” legislative package as well. Modern-day policing and the excessive use of force against communities of color are a direct result of the Second Amendment, an outgrowth of the early American desire to maintain slavery at all costs. Excessive use of force and reliance on the Second Amendment as a right to bear arms are both examples of systemic racism.

Racial equity lies in taking present steps to correct past flaws. Despite what gun owners, Black and white, say, the Second Amendment is a relic of an abhorrent and racist past. You cannot fight gun violence by increasing the potential for gun violence. You must reduce that potential through the passage of gun control measures like the bills currently before the Washington state Legislature, bills that must be considered a fundamental part of achieving “racial equity” in the state of Washington.