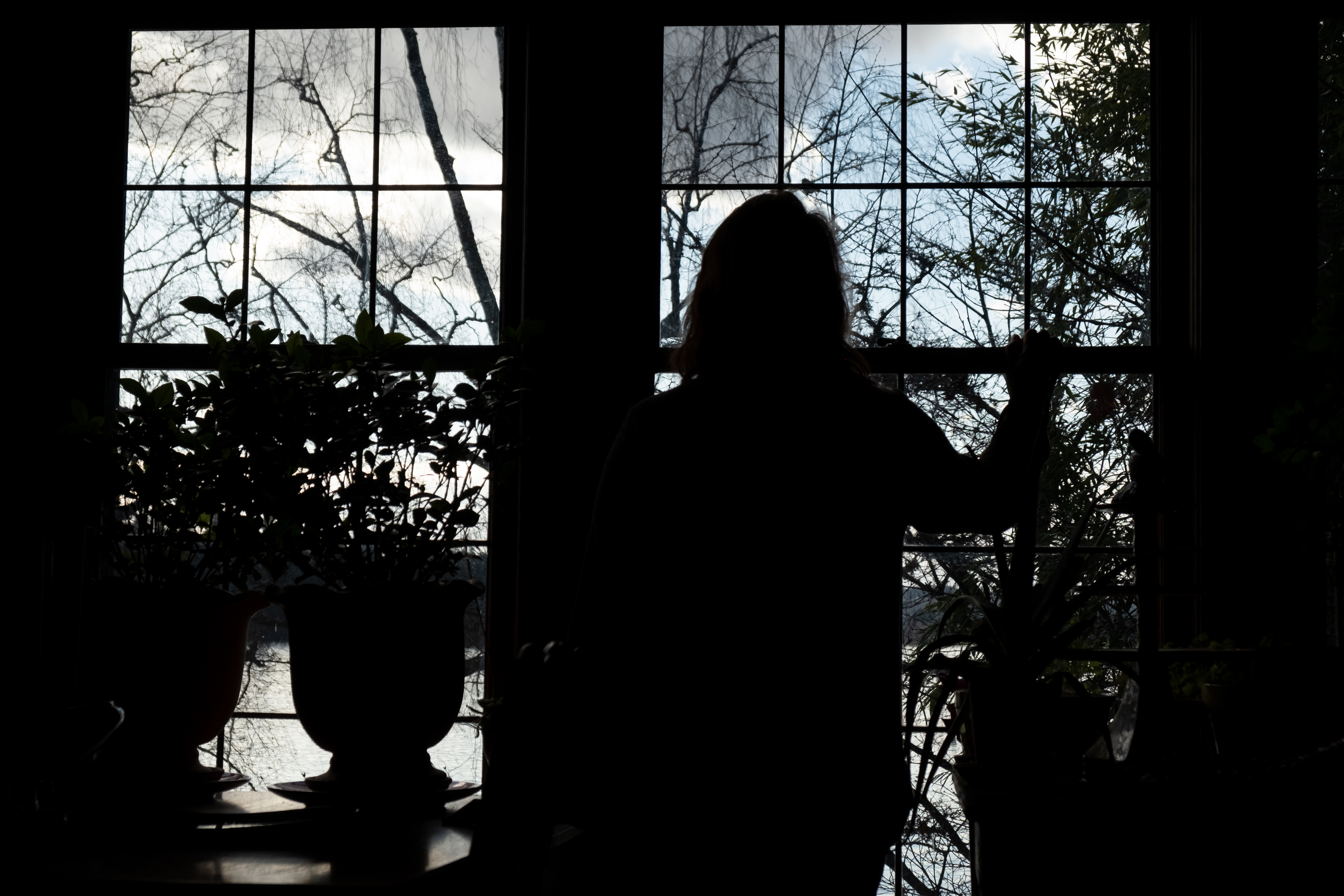 Jennifer (a pseudonym) stands before a window in the home she rents in an upscale King County neighborhood. (Crosscut)

Jennifer doesn’t fit the stereotype of a tenant facing eviction. Two years ago, she thought she was on her way to buying the house she rents in an upscale King County neighborhood. She scraped together a $50,000 earnest payment, then borrowed another $50,000. But when she had trouble securing a mortgage for the balance, the LLC that owns the property wouldn’t let her back out of the contract. The sale was off, and she could stay if she kept paying rent, but they were pocketing her $100,000.

“Everyone assumed we were working it out, and it was so informal, there was never a lawyer,” Jennifer explains. (Crosscut is using a pseudonym to protect the tenant’s privacy.) “I thought it was all kosher and then they got brutal.”

The dispute landed in court; Jennifer represented herself because by that point she couldn’t afford an attorney.

“I lost,” she says. “They got all my savings and then the next week they started trying to evict me.”

Then COVID-19 hit. The eviction moratoriums halted the process, for a time. But Gov. Jay Inslee eventually loosened Washington state’s moratorium to allow for evictions with a 60-day notice in cases where the landlord intends to sell or personally occupy the premises. In a red hot real estate market, it was a tempting loophole. In King County alone, 116 evictions have been filed citing this reason — more than a third of all filings since the pandemic started.

In October 2020, Jennifer found a 60-day notice to vacate on her door. The landlord, it said, planned to put the property on the market.

The pandemic had abruptly halted Jennifer’s work in the arts, and her secondary business, related to the travel industry, evaporated, too. After enhanced unemployment benefits ended and her weekly payments dwindled to $235, she applied for King County’s rental assistance lottery and was selected. But the owners of the LLC refused because the program required the landlord to take a 20% “haircut.” They wanted their rent in full, and now they wanted Jennifer out.

“It was 100% about rent, but they couldn’t say it was about rent,” she says. If the LLC really wanted to sell the property, she points out, they could have done so with a tenant still in place. (It’s also worth noting that there are basically no consequences for a landlord that evicts a tenant on the grounds that they intend to sell, but then never actually sells or even lists the property.)

This time, Jennifer found legal representation through the Housing Justice Project of the King County Bar Association. She had a strong case. Her situation was clearly covered by the federal moratorium — a national order halting residential evictions issued by the Centers for Disease Control and Prevention in September 2020, and later extended through March 31. Jennifer signed the required declaration and delivered it to her landlord, who predictably wouldn’t bend. They headed to court again.

That’s when the King County Superior Court made a very strange call. First a commissioner and then Judge Regina Cahan ruled that the national moratorium didn’t apply. Why? Because Washington state has its own moratorium.

It’s true that the CDC order applies only in jurisdictions that “do not have in place a moratorium on residential evictions that provides the same or greater level of public-health protection than the CDC’s Order.” But in this instance, our state moratorium is clearly weaker, because it does not prevent landlords from evicting renters like Jennifer during a deadly pandemic, whereas the CDC order does.

This wasn’t the first time the King County Superior Court — or even Cahan — ruled this way. On Nov. 19, 2020, Cahan ordered that an eviction should proceed in Nyman v. Hanley. The renter, also represented by the Housing Justice Project, appealed to the Washington Supreme Court, which halted the eviction on Feb. 3 and set the matter for oral argument in May.

The very next day, Feb. 4, the Supreme Court halted another eviction in Stevens County and postponed consideration of that case until after Nyman was resolved, explaining that “the court’s decision in Nyman may provide controlling precedent on the scope of the protections offered under the CDC’s eviction moratorium.”

At this point, you might imagine the court’s message to all lower courts in Washington state was clear: If renters are covered by the CDC moratorium, don’t evict them. We’re still figuring this out.

But if that was the message, it didn’t get through.

King County Superior Court Commissioners Mark J. Hillman and Henry Judson, along with Judge Cahan, have continued to order evictions. (Court officials are not entirely unanimous on this point — on March 5, Superior Court Judge Elizabeth J. Berns reversed one of Hillman’s rulings and stopped an eviction, citing Nyman.) A Thurston County case is also awaiting a ruling by the state Supreme Court.

“We had hoped the Superior Courts would mirror the [state] Supreme Court’s example and pause evictions for the time being,” says Edmund Witter, managing attorney at the Housing Justice Project. “But a number of judicial officers in King County and elsewhere have decided they don’t care.”

When Jennifer’s case came before Cahan on March 12, she was apparently undeterred by the fate of her own earlier decision. She again pronounced that “the CDC order does not apply in Washington.”

The eviction was set for March 18.

“It’s just terrifying,” Jennifer says of her experience. The moving company wanted $2,700 for a short-notice job, money she didn’t have. And stage managing five sweaty movers in a tight space during a pandemic? It didn’t sound safe.

“I wouldn’t be in a tent downtown,” Jennifer says. “I would be couch surfing, but I have dogs and I wouldn’t know where to put my things. I tried to look for resources. How is it that the landlords can refuse [rental assistance]? If they refuse, they shouldn’t be able to kick you out.”

Jennifer says a sheriff’s office detective called multiple times to ask how her move was going. If she wasn’t out by eviction day, Jennifer recalls the detective saying, her belongings would be removed from the house and placed on the street. (A sheriff’s office spokesperson states that, by law, tenants are given the option to request that their possessions be moved to storage instead of to the nearest right of way.)

Finally, on March 16, two days before the scheduled eviction, the state Supreme Court issued a stay, just as it had in the earlier cases. Jennifer breathed a sigh of relief.

But unless the Supreme Court steps up and issues general guidance to the Superior Courts, instead of taking these cases one by one, this same absurd story will continue to play out for renters in King County and across the state. That’s a waste of time and taxpayer dollars, not to mention the human cost. Jennifer’s harrowing experience is a best-case scenario. It’s only the lucky few who have access to legal counsel.