Rejecting anti-Asian hate, in Atlanta and in Washington state

The Pacific Northwest has its own legacy of racism and exclusion to contend with. 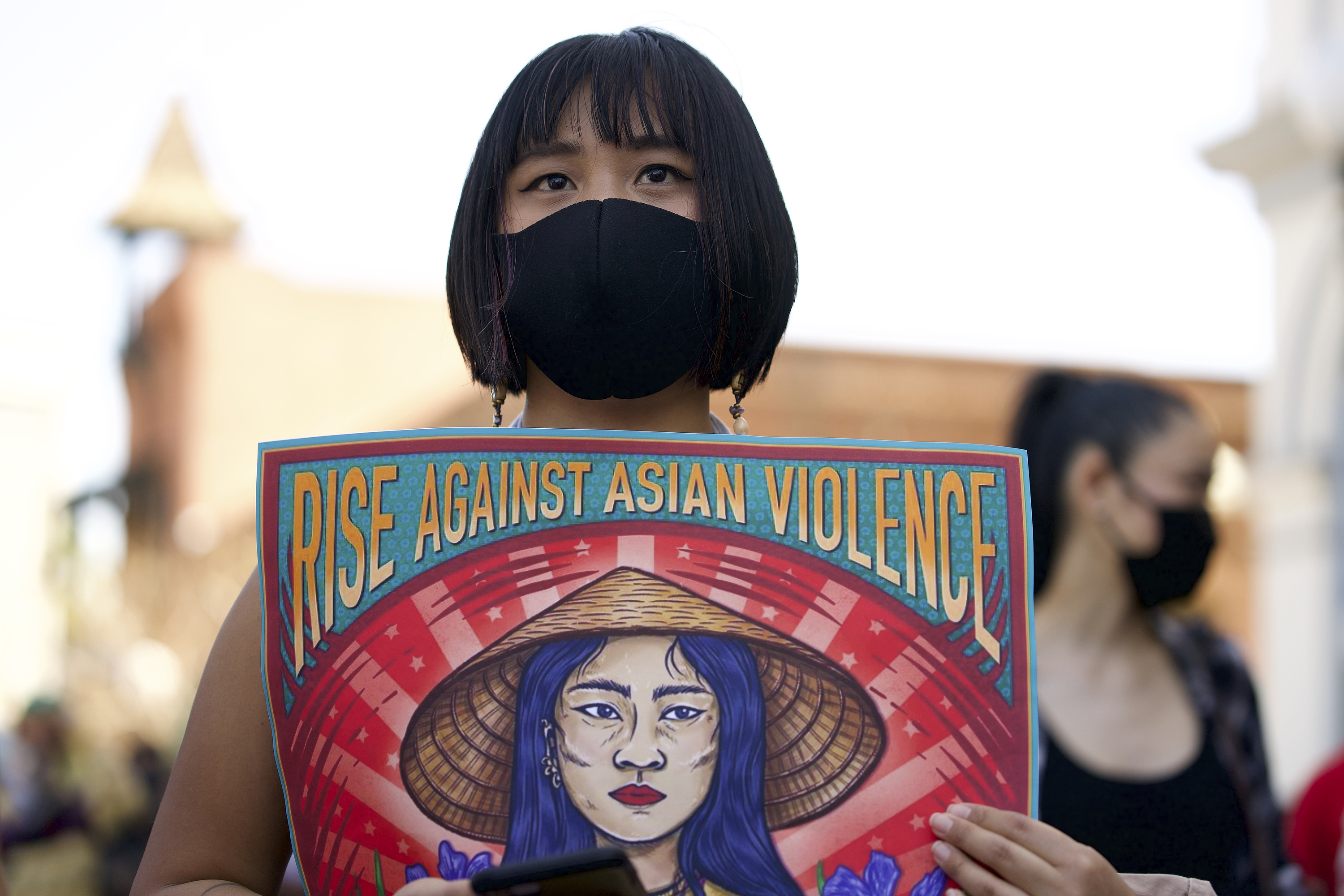 Ally Vega holds a poster by artist Pauline Cuevas, as she joins a rally against Asian hate crimes in El Pueblo de Los Angeles, Los Angeles Plaza Park, Saturday, March 27, 2021. The gathered crowd demanded justice for the victims of the Atlanta spa shooting and for an end to racism, xenophobia and misogyny. (AP/Damian Dovarganes)

My first reaction to the shootings in Atlanta was anger — here we go again. My second reaction was sadness for the victims of yet another preventable spree of gun violence. And my third reaction, after listening to the Cherokee County Sheriff’s Office and the head of the FBI, was directed specifically to my Asian American brothers and sisters — you don’t deserve yet another reminder of racism, American style. No one does.

Law enforcement’s initial response to the killings of eight people, six of whom were Asian women, in Atlanta massage parlors was a textbook example of how systemic racism encourages and supports acts of individual racism. It underscored how racism against Asian Americans is intimately tied to racism against other communities of color. And the tragic events in Atlanta also point to a need for greater gun-control legislation.

In the aftermath of the massacre, Cherokee County sheriff’s spokesperson Capt. Jay Baker described the suspect as having a “bad day.” That callous remark deflected attention away from the victims and onto the suspect. (Baker, it was later revealed, had recently posted anti-Asian images and remarks on his Facebook; he has since been removed from his position as spokesperson.) Both Baker and FBI Director Christopher Wray said it appeared the shootings were not racially motivated and, therefore, did not constitute a hate crime. Not only did those remarks further shift the focus onto the suspect, they also denied the reality that the Asian American community has recently experienced a sharp rise in crimes directed against them. Nearly 3,800 incidents of hate targeting Asian Americans have been reported in the past year.

Years ago, some of us used the phrase “have a nice day racism” to describe what we now call systemic racism. A loan officer at a bank could say “have a nice day” to you, with all sincerity, while implementing the bank lending practices that denied you a loan. Nothing in your loan application indicated you would be turned down. But your ZIP code placed you in a community of color where the bank declined to offer loans in a practice known as redlining.

Thanks to Jay Baker, we now have a new term to add to the lexicon of hate. Let’s call it “had a bad day racism,” a way of normalizing acts of violence against individuals of color based on perpetrators finding themselves under the stress of things going wrong in their lives. So, was Dylann Roof having a bad day when he murdered nine people in a South Carolina church? Was Derek Chauvin having a bad day when he snuffed the life out of George Floyd?

Whatever we want to call it, the shootings in Atlanta were acts of racism, regardless of whether the gunman intended to kill Asian women, in the same way that the denial of a loan based on ZIP codes was an act of racism, even if the loan officer did not deliberately discriminate. Systemic racism supports and normalizes acts of individual racism.

Not only was the Asian American community on heightened alert because of increased violence, but the very reason that Asian women were targeted in massage parlors speaks to the intersection of racism and sex. Baker described the suspect’s reported “sex addiction” as his motive in the killings.

“That may or may not be the case,” said Esther Kao, with Red Canary Song, a New York City group that advocates for Asian American sex workers. “The majority of massage parlors are licensed businesses that also provide professional, nonsexual massages."

Even if some of the slain women were sex workers, they should not be subject to summary execution. Perhaps a better question is why the American sex trade targets Asian women for working in massage parlors? Kao pointed to a “fetishization of Asian women’s bodies that is unique to this kind of crime,” and this kind of industry. This is systemic to the sex industry, and because it targets Asian women, it’s a form of systemic racism. Individual acts of violence against these women, even if motivated by sexual addiction, are individual acts of racism.

Add to this fetishization of Asian women, the demonization of all Asians, which began with Trump’s racist pandemic pronouncements of the “China Virus” and the “Kung Flu,” and his heated words toward China. Bipartisan political rhetoric identifying China as the major threat faced by America continues even under the Biden administration, as recent statements by Secretary of State Anthony Blinken and Secretary of Defense Lloyd Austin have shown. Hot words directed at Asians abroad lead to violence against Asians at home, the Pulitzer Prize-winning author Viet Thanh Nguyen and the scholar Janelle Wong argued in a recent Washington Post op-ed. This toxic brew of systemic anti-Asian racism helps create the conditions for the kind of violence that occurred in Atlanta.

And then, there is the matter of Cherokee County.

Just hearing Baker introduced as a captain in the Cherokee County Sheriff’s Office set off alarm bells. It didn’t take long to discover the county was named after Cherokee natives who inhabited the land, and lost it through the Cherokee Land Lotteries of the 1800s. Through the military actions of Andrew Jackson and others, officials stole land from the Cherokee and the Creek nations and reapportioned it to white men. First they planted tobacco. Then, in the 19th century, when tobacco became unprofitable across the South, they replaced it with cotton. Feeding the new, hungry cotton gins required more labor than existed in places like Georgia, and so white farmers acquired human chattel to work the plundered land. As a result, slavery expanded exponentially in the American South.

The Atlanta shootings are a terrible reminder of this history of racism in America directed against all communities of color. 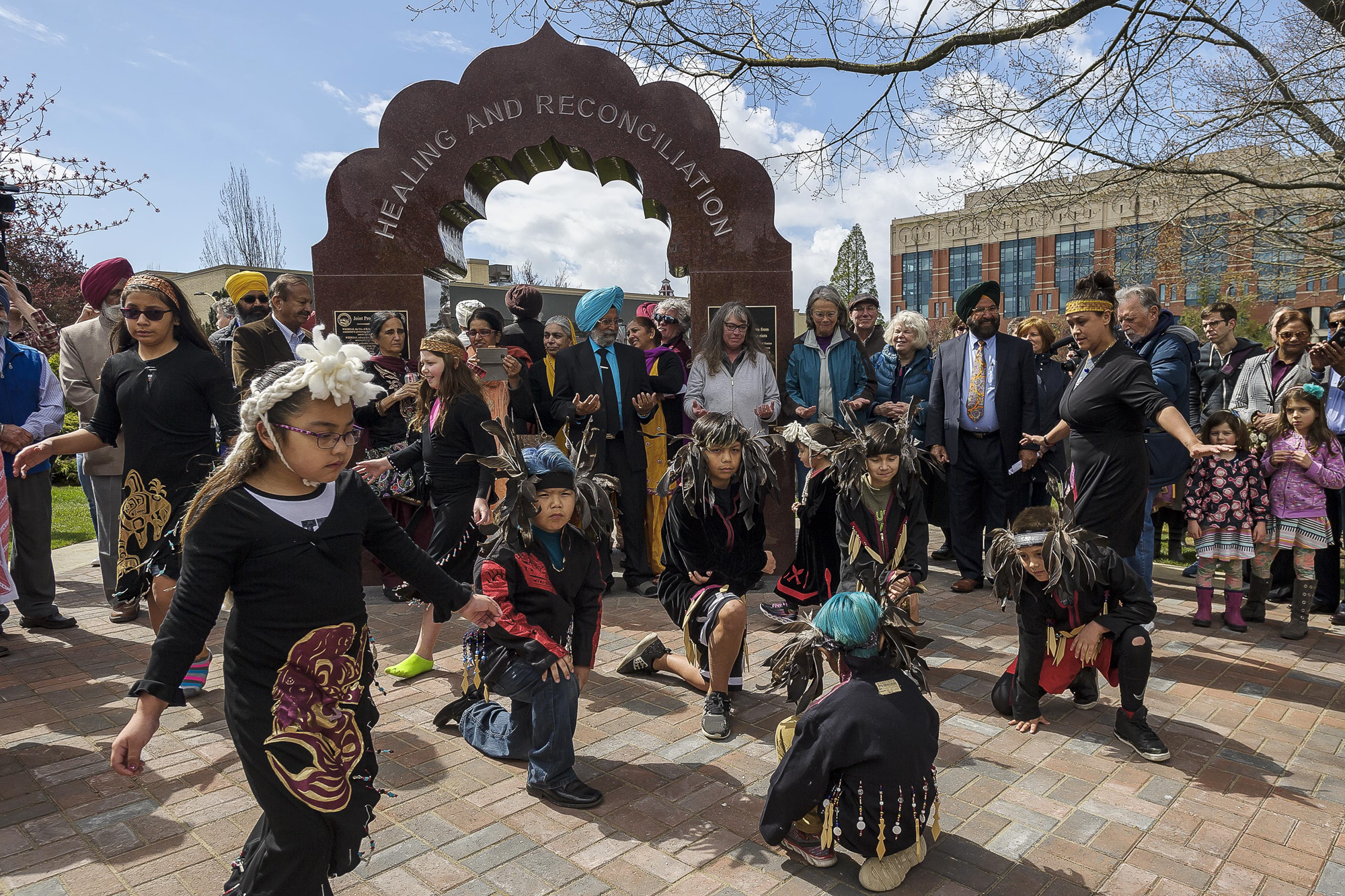 But Washington state must contend with its own ugly history of anti-Asian violence. Many know of the internment of Japanese American citizens during World War II, who were incarcerated at “concentration camps” in California and other states across the west as well as Arkansas. Others were held at the Puyallup detention facility, now known as the Washington State Fairgrounds, before being transferred to camps at Tule Lake in California and Minidoka in Idaho.

However, few know of the white mobs that chased South Asian immigrants from Bellingham in 1907, leaving in their wake broken windows and battered people, including some police officers. Members of the white-men-only Asiatic Exclusion League were concerned that these South Asians immigrants would take their jobs at local lumber mills. Approximately 200 Punjabis were beaten and pulled from their workplaces and homes, then rounded up in the basement of City Hall, now the deep-red brick museum with a clock tower that is emblematic of the city. They were told to leave Bellingham, and within 10 days the entire population of South Asians was gone. But the actions of this white mob had implications far beyond Bellingham.

Driven out of Bellingham, these South Asians faced similar racism and violence in Everett and other West Coast cities where they attempted to settle. This anti-Asian sentiment led to the National Origins Act of 1924 and a quota system restricting all non-Europeans from entering the country, an effort to maintain the “ethnic purity” of the United States. Eugenicists and the Ku Klux Klan were thrilled. In 2015, Jeff Sessions, President Donald Trump’s first attorney general, praised the act, saying, “[It] was good for America.” Later, Stephen Miller, Trump’s adviser on immigration, sought to implement the spirit of the act through draconian policies directed not at Asian, but Latinx, immigrants, including “zero tolerance” and “child separation.” The current administration is now left with a quagmire at U.S. borders with origins in the anti-Asian racism of Washington state.

Here, too, is a history of racism against several communities of color. Bellingham is the seat of Whatcom County, whose name derives from the Lummi word Xwotʼqom, meaning “noisy water.” (It is likely a reference to the Nooksack River.) The Point Elliott Treaty of 1855 stripped the Lummi and many other Pacific Northwest tribes of their land and resources, herding them into reservations and taking their land for white Europeans. Treaty promises made to Northwest tribes, including medical assistance, education and permanent access to natural resources, were never fulfilled.

Not long after the 1907 riots, Bellingham became a thriving center for the Ku Klux Klan. At Bellingham’s Tulip Festival parade, in 1926, the KKK held an evening march that drew hundreds dressed in white sheets and white hoods. Three years later, the city hosted the Washington state convention of the Knights of the Ku Klux Klan, honoring Grand Dragon E.B. Quackenbush with a key to the city. Crosses were burned in the hills above Western Washington University in 1924; in Lynden in 1926; and, most recently, at a migrant workers camp just outside of Bellingham, in 1994.

Satpal Sidhu is a member of the same Sikh community originally driven from Bellingham. In 2018, he saw his yearslong effort to commemorate the 1907 massacre honored with the dedication of the “Arch of Healing,” a monument located across from the Whatcom County Courthouse. The erection of the “Arch of Healing” joins others of its kind in the Pacific Northwest, including the Japanese Internment Memorial on Bainbridge Island and the Chinese Reconciliation Park in Tacoma. In a fitting tribute to this legacy, Sidhu was elected Whatcom County executive in 2019.

These physical memorials matter. They both honor and force recognition of our shameful past. They serve as permanent counterarguments to anti-Asian violence and racism, and can help with healing and reconciliation. But they are clearly not enough. The gunman in Atlanta bought his automatic handgun the same day as the shooting because gun rights advocates in the state have long resisted even a waiting period for gun purchases. (A bill introduced in the wake of the Atlanta shootings would establish a five-day waiting period.)

I wonder whether the shootings in Atlanta and in Boulder, Colorado, finally splattered enough blood on the hands of the National Rifle Association and gun-rights advocates for them to notice. Will gun control resisters allow such sensible reform as a waiting period to pass through the U.S. Congress and state legislatures, even though much tougher legislation is needed?

Frederick Douglass, that great champion of abolition and freedom, said in an 1869 speech to white Americans: “I assert for the Chinese and Japanese, and for all other varieties of men equally with yourselves, now and forever. I know of no rights of race superior to the rights of humanity, and when there is a supposed conflict between human and national rights, it is safe to go to the side of humanity.”