What Seattle should preserve after the pandemic

We’re not out of the woods yet, but when we get there, what do we want to hold on to? 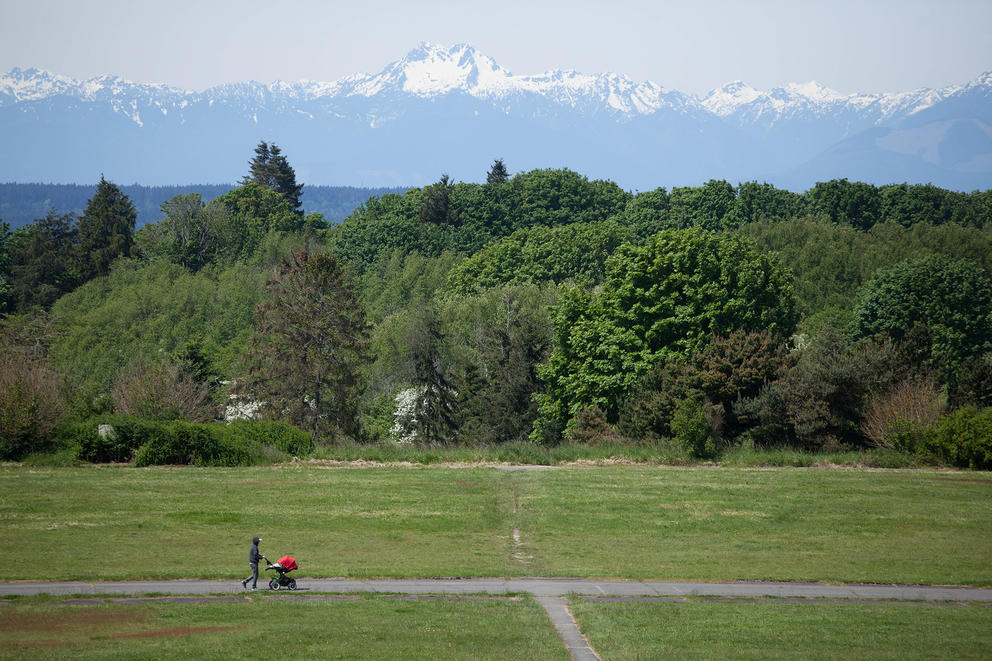 Throughout the pandemic, parks and outdoor spaces around Seattle have become a refuge. (Matt Mills McKnight/Crosscut)

Sunny days usually whip Seattleites into a frenzy, but this year, as spring draws close, there’s an especially palpable frisson in the air. With COVID-19 case numbers down and vaccination numbers rising, many of us are eager to put this pandemic behind us in time for a seminormal summer, with more social gatherings, live performances and, soon, Mariners games.

“What’s the first thing you’re going to do after you get vaccinated?” is the question on everyone’s lips and one my vaccinated self has answered many times: I’m going to see my parents again, I’m going to watch the Sounders, I’m going back to the Southgate Roller Rink.

But mostly, as Seattle’s regular rhythms return, as the traffic slows and the tourists scurry up and down Pike Street, I find myself hoping that we will carry some of the lessons of the past year with us into the future. COVID-19 has been devastating, but it has also interrupted an unsustainable status quo in ways that are worth analyzing and perhaps preserving. So I’ve started asking people a different question: “What do you want to stay the same after the pandemic ends?”

It’s challenging to answer because COVID-19 has exacted such an awful toll. At first, most people say, “Well, I hope the traffic doesn’t come back.” Certainly, none of us want businesses to remain closed, unemployment to remain high, and social isolation to continue. Many of us, myself included, have lost loved ones to the virus. But if you take a second, you can probably think of a way in which life has shifted this past year that you hope endures after the pandemic subsides.

While you ponder, I’ll tell you my answer: I hope Seattleites maintain this same commitment to public health during future flu seasons. Right now, our city is the envy of the country because of our response to COVID-19. “Seattle’s Virus Success Shows What Could Have Been” was the wistful headline the New York Times ran last week, praising the city for having the lowest death rate among America’s largest metropolitan regions. Structural and political factors facilitated that outcome, but it certainly mattered that we have been diligent in wearing masks and keeping our distance.

As a result, influenza has been almost nonexistent this year, with zero confirmed deaths so far statewide. In the past, we’ve accepted dozens of flu deaths a year as the norm. In the 2019-2020 season, there were 114 flu deaths statewide and 91 outbreaks in long-term care facilities. Around this same time last year, 30 King County residents had died from the flu. We have become inured to these seasonal deaths because we’ve been living with influenza for so long, because the mortality rate is relatively low and because, sadly, our society places less value on the lives of those who are vulnerable. (Sound familiar?)

But, hopefully, COVID-19 has interrupted that apathy. Imagine if we were as eager to get flu shots as we were to get our COVID-19 vaccines — and if we avoided older folks and people with underlying health conditions when we felt ill, instead of brazenly showing up to work or get-togethers with a cough or a sniffle. Imagine employers encouraging us to stay home if we feel unwell as vigorously as many of them did in the spring of 2020. And I, for one, am going to hang on to my masks to wear during crowded light-rail rides and grocery store runs.

I asked some longtime Seattleites my question about life after the pandemic and was pleased by the variety and depth of responses. After a year of protests and picnics, author and memoirist Mattilda Bernstein Sycamore hopes that we continue to claim public space going forward — even if that puts us at cross-purposes with a city that shut down parking lots and restrooms at our most popular parks during the pandemic.

“It’s time to reengage with public space based on curiosity and cross-pollination and communal care rather than the suspicion and territorialism that are so ever-present in a city that oftentimes [lets] a sort of tyranny of the suburban imagination exert a stranglehold over urban life,” she told me.

While walking through the city, Sycamore has been amused by the sight of Seattleites who are shocked to find themselves in the presence of — gasp — so many other Seattleites.

“They’re in Volunteer Park and they’re like, ‘Oh my God, who are these people around us?’ ” she said, laughing. “If you’re going to have a party in a park, you should be excited about people being near you!”

Inye Wokoma, co-founder of the Central District arts center Wa Na Wari, hopes that the socioeconomic problems that have been exacerbated and laid bare by the pandemic — like rising housing costs, vanishing cultural space, and the displacement of Black homeowners — can continue to capture Seattleites’ attention after COVID-19, but he’s not placing any bets on that outcome.

“I guess the biggest thing about the past year is that people seem to be at least more willing to talk about these long-term structural inequalities,” he told me. “I don’t know that that necessarily translates into there being actual political will to do something about it because it’s hard work. It’s the kind of work that is long and grinding, and you have to be committed to it for years at a time to make things happen.”

Still, Wokoma isn’t writing off the possibility that a meaningful number of people in our area have been politically activated by the pandemic in a more enduring fashion.

“I’m always cautiously optimistic,” he told me, “not necessarily that things are going to change with a capital ‘C,’ but that we can move the needle a little bit around some issues.”

If you want to see a smaller-scale example of what it might look like to care more for each other while advocating for broader structural change, look no further than South Park. There, Robin Schwartz of the Duwamish River Cleanup Coalition has helped distribute COVID-19 resources, and one GoFundMe has raised over $90,000 to help families with rent.

“I’ve seen a whole lot of cooperation and collaboration and people contributing where they can,” Schwartz told me.

Still, she knows that this kind of assistance isn’t a perfect substitute for more permanent, government-provided support.

“It’s painful to ask people to donate for basic needs out of the goodness of their hearts — I’m obviously grateful they are — but I wish there were more safety nets in place so that it doesn’t depend on people’s kindness,” she said.

In the meantime, though, perhaps we can keep showing some of the kindness we’ve displayed during the pandemic even after it wanes because, before long, that costly status quo will snap into place.

Indeed, the present feels an especially important window of time to consider how you want to act — and what kind of political change you want to push for — before we return to the Seattle of 2019, with all of its problems.

Maybe you want more streets to stay closed for pedestrians or continuing attention paid to the high cost of rent. Maybe you want motels to keep being used to house homeless people. Maybe you want work-from-home flexibility to continue to cut down commute times and, yes, ease some of that terrible traffic. Whatever your answer to my question, now is the time to vocalize it before we hurtle headlong into a summer of catharsis and these more existential conversations about the shape of the city become harder to hold.

Instead of leaving a lost year in the past, let this be an opportunity to build a better future.