Is this the year Washington state starts a public bank?

A bill moving through the state Legislature could set up a public bank to address our vast infrastructure needs. 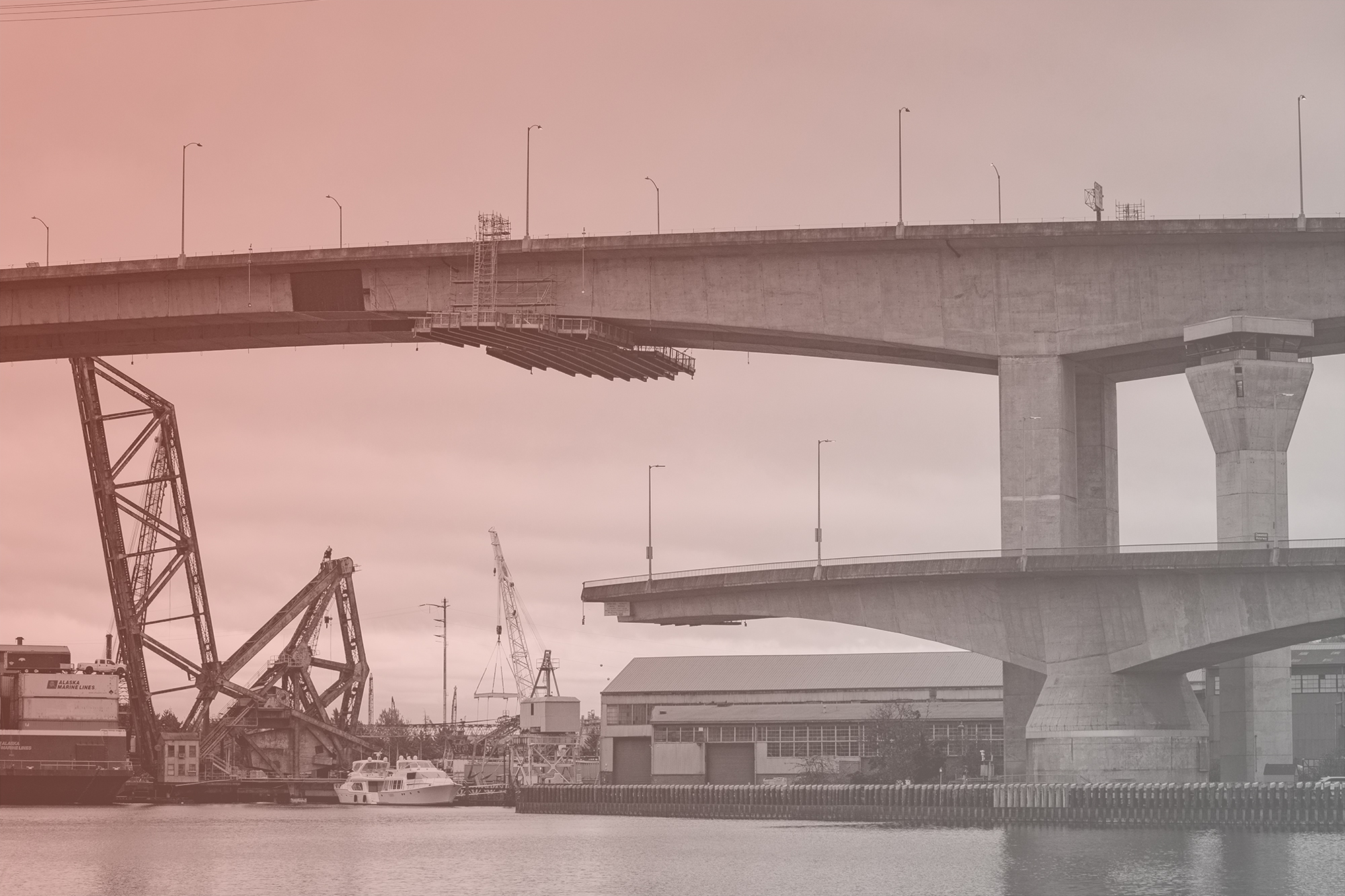 If passed, SB 5188 will establish a public bank in Washington, which would allow municipalities across the state to deposit public funds and borrow to fund infrastructure projects, such as roads, bridges and affordable housing. (Jovelle Tamayo for Crosscut)

It’s a high-stakes year in the Washington state Legislature. If you’ve been reading the news, you’ve probably heard about proposals to provide pandemic relief, tax the rich, protect tenants from mass eviction and more. But some transformative bills have been flying mostly under the radar. One of them, Senate Bill 5188, could create a Washington state public bank.

If this bill succeeds, our state will be poised to establish the second public bank in the nation. The first opened its doors in North Dakota all the way back in 1919.

Just over a century ago, North Dakota politics were swept by a progressive-radical-populist alliance of farmers, workers and small businesses calling themselves the Nonpartisan League. Farmers, in particular, were tired of being squeezed mercilessly by the big out-of-state bankers and grain monopolies. The NPL won both houses of the Legislature in 1918 and pushed through an ambitious program that included a graduated state income tax, a Workmen’s Compensation Fund, a publicly owned grain mill — and a state bank. The bank gave farmers, ranchers and small businesses new access to affordable lines of credit.

Today, the Bank of North Dakota still provides agricultural and business loans in partnership with a dense ecosystem of local banks and credit unions. It also buys up residential mortgages originated by local banks and offers student loans with some of the lowest interest rates in the nation. All state funds are housed in the bank, earning competitive returns, and a portion of the bank’s profits — which totaled $169 million in 2019 — flow back into the state’s general fund. The bank helped North Dakota to thrive, relatively speaking, throughout the Great Recession. Last year it gave North Dakota’s small businesses the edge in obtaining Paycheck Protection Program loans. It also funds disaster relief.

There’s not much of a downside, which is probably why the Bank of North Dakota, once decried as part of a Bolshevik revolution on the Great Plains, has continued to flourish even as North Dakota turned deep Republican red.

Public banks might be a rarity in the U.S., but globally we’re way behind the curve. “Public banking has been around in Europe forever,” explains state Sen. Patty Kuderer, D-Bellevue, prime sponsor of SB 5188. In many countries, public banks finance major infrastructure projects and mission-oriented research and development. State investment banks have helped to make Germany, Brazil and China global leaders in green energy technologies.

“It’s challenging in the United States because the banking industry has such tight control over our monetary system,” says Kuderer.

Attempts to get a public bank going in Washington state date back to at least 2009, when Sen. Bob Hasegawa, D-Seattle, then in the state House of Representatives, championed the idea. His efforts eventually led to a task force and several studies. There’s been a public bank bill in the Legislature nearly every year of the past decade, but none ever made it out of committee.

This year is different. The COVID-19 pandemic and recession forced governments to take an unprecedentedly hands-on approach to the economy and the financial system. Last April, the International Monetary Fund wrote approvingly of public banks’ potential to help households and firms through the pandemic. All that set the stage for SB 5188, which passed the Senate 27-21 on March 5, and is scheduled for a public hearing in the House Committee on Consumer Protection & Business at 8 a.m. March 17. (Washington state residents can register their opinion, pro or con, here until an hour before the hearing.)

So, what exactly does SB 5188 do? Washington’s public bank would differ from North Dakota’s, in part because our state constitution prohibits state and local governments from lending to private individuals and corporations, with a few exceptions. Neither could individuals or businesses open an account there. Part of the reason for this is political, explains John Comerford, who served on the aforementioned task force: Commercial banks would see such an enterprise “as a competitor rather than as something that complements them.”

In the late 1970s, under President Jimmy Carter, Comerford was charged with putting together the National Consumer Cooperative Bank (whose members and clients are consumer cooperatives, like REI) and served as its first president. That experience suggested another model. In 2017, says Comerford, the task force “came up with the idea of a cooperative bank that would be owned by the members, who would be political subdivisions of the state.”

SB 5188 would thus create a “public financial cooperative” (the bill’s first version called it a “public cooperative bank,” but the commercial banks objected to the name). Local governments like cities, towns, counties, ports, public utility districts and tribal governments can join the cooperative through a membership fee. They can then deposit revenue, earning interest just as they would at a commercial bank. On the strength of those deposits and some initial funding from the state, the cooperative would have the power to borrow money and issue bonds, making much larger amounts of capital available to lend to member jurisdictions on favorable terms.

The main purpose of the cooperative, explains Dennis Ortblad, a Seattle-based public banking advocate and board member of the Public Banking Institute, is to “provide a public lending tool for infrastructure.” The cooperative “is tasked with looking for ways to better finance infrastructure of the municipalities and the other public localities in the state,” he says. “It serves very well the smaller counties that can’t bond on their own anyway.”

The state’s infrastructure needs are vast, and none clearer than the housing crisis. Here, SB 5188 places special emphasis. The cooperative will be staffed by the Washington State Housing Finance Commission and, after its first five years, it will aim to direct 35% of its lending to support housing in low- to moderate-income areas.

Kuderer emphasizes how a public financial cooperative will help to stabilize communities during tough economic times. The cooperative, she says, will “allow us to keep projects going, to keep people working, and that way the impact to the local economy won’t be as bad as it would normally be during a recession.”

Maria Batayola, environmental justice coordinator at El Centro de la Raza, sees potential for tackling the “digital divide” that has become so glaring during the COVID-19 pandemic. “Families with lower incomes just don’t have the devices,” she says. The new financial cooperative could fund investments in public broadband or other strategies to guarantee access to high-speed internet, and ensure that all students have computers or tablets equipped for interactive learning — infrastructure that Batayola says should be considered part of the school system.

And, although SB 5188 focuses on infrastructure, Rep. Frank Chopp, D-Seattle, hopes that eventually the scope of a public bank could be expanded to include student loan financing; he’s looking into ways to achieve this end consistent with our state constitution.

So, will Washington state found a public bank this year? SB 5188 cleared the Senate hurdle, but support in the House is not guaranteed. Rep. Jeremie Dufault, R-Yakima, who sits on the committee that will hear the bill this week, worries that a public bank will end up lending money unfairly and unwisely. “Private sector banks are run by professionals who lend money to creditworthy applicants,” he says. “Banking is a serious and competitive business that should be left to the professionals who know what they are doing.”

Public banking advocates might reply that the professionals’ track record this century is less than impressive. Remember the subprime mortgage crisis and the global financial meltdown? But, clearly, opposition and doubts about a public bank remain. Every legislative session leaves in its wake a debris of promising, but dead, bills, and Comerford warns against complacency: “It’s like running a marathon and getting 24 miles into it and then getting cramps. You’ve got to get to that finish line.”