Is it time for Seattle to decriminalize shrooms and psychedelics?

Washington state led on legalizing marijuana. Plant-derived psychedelics could be next. 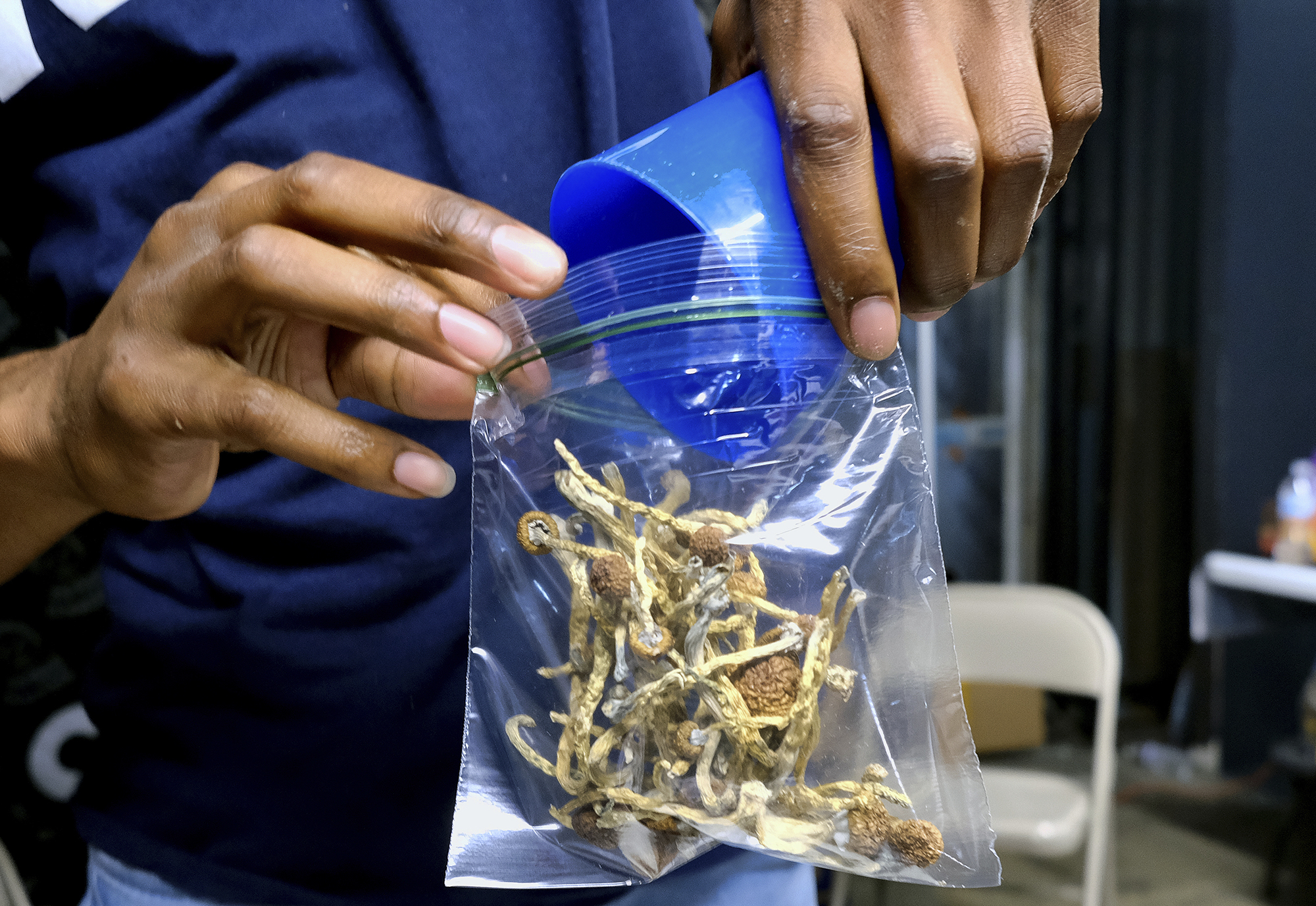 In this Friday, May 24, 2019 photo a vendor bags psilocybin mushrooms at a pop-up cannabis market in Los Angeles. (AP Photo/Richard Vogel)

“I feel like I’ve lived a pretty normal life. I’m a pretty resilient person,” she says. “But when it came to the residuals of trauma, I never knew how much it was affecting me until I had my first psychedelic experience.”

As a child in northern New Jersey, Luz experienced domestic violence over a number of years. She never got to know her father, who, she says, was a casualty of the war on drugs. As an adult, she was barely aware of how these childhood experiences had shaped her, making it hard to trust people or initiate meaningful relationships. Psilocybin changed that. “It really awakened me to the constructs that my body and my mind had created to protect me, the things I had to learn to do to survive that emotionally,” she says.

Now, Luz wants to make this kind of awakening accessible to more people. She helps to lead a group called Decriminalize Nature Seattle, which hopes to forge a path to legalizing psychedelic drugs in Washington state. (The group is part of a national network and is unrelated to the police divestment group Decriminalize Seattle.) The group’s first step? Passing a resolution through the Seattle City Council to make three plant-derived psychedelics, or entheogens — ayahuasca, psilocybin and ibogaine — the lowest priority for law enforcement.

It’s a strategy that’s worked before. In 2003, Seattle voters passed an initiative making adult marijuana possession the lowest law enforcement priority. Less than a decade later, in 2012, Washington became the first state to fully legalize the recreational use of marijuana.

We’re now in something of a moment for drug decriminalization. Last year, Oregon voters approved a measure that reclassifies possession of a controlled substance as a minor violation and steers drug users toward health services rather than punishment. Just last month, the Washington Supreme Court’s stunning decision in State v. Blake struck down the state law that criminalizes drug possession, with far-reaching and still unclear ramifications. Legislators are now debating whether to reinstate some new version of that law; Senate Bill 5476, sponsored by Sen. Manka Dhingra, D-Redmond, borrows some elements from the Oregon measure. But advocates, including King County Equity Now, the Washington Defender Association and the Washington Association of Criminal Defense Lawyers, are urging the Legislature to refrain from hastily reinstating any penalties for drug possession, pending a more thorough community process and commitments to redress the failures of the war on drugs.

Which brings us back to the Seattle shroom project. Legalizing plant-based mind benders like psilocybin and ayahuasca may sound like a pet cause for a handful of Seattle’s aging hippies. These drugs lack the mass market appeal of marijuana. And, unlike cocaine or opioids, they’re not tangled up with grave social problems — poverty and homelessness, the drug trade and the pharmaceutical industry, policing and the criminal legal system. But proponents insist there’s a lot more at stake than a fun (or not-so-fun) trip.

“We’re finding these psychedelic substances have incredible efficacy in treating a wide array of disorders,” including major depressive disorder, post-traumatic stress disorder and substance abuse, says Kody Zalewski, a medical researcher at the University of Washington working in neuroimaging. Zalewski himself does not research these drugs, but he has a long-standing interest in entheogenic medicine and serves on the executive committee of Decriminalize Nature Seattle.

Psychedelic research has a troubled history, starting soon after the synthetic hallucinogen LSD was brought to the U.S. in the late 1940s. The 1950s saw promising research into the drug’s therapeutic potential, but the larger effort was a CIA-funded program investigating the use of LSD and other mind-altering drugs for psychological manipulation and espionage. Subjects included prisoners, overwhelmingly Black men, who “consented” to participation in return for a reduced sentence or access to highly addictive drugs like heroin. After LSD became a staple of 1960s youth counterculture, the crackdown began and research of all kinds withered after the Controlled Substances Act was enacted in 1970.

But after a 30-year freeze, the ice began to thaw. We’re now 20 years into a renaissance in psychedelic research. Ever since a group of researchers at Johns Hopkins University obtained approval in 2000 to resume trials using healthy volunteers, studies have been piling up, suggesting the promise of psychedelic drugs to help people kick nicotine, alcohol and opioid addictions; treat depression and post-traumatic stress disorder; ease the existential anxiety of terminal illness; and just plain make people feel good. Last year, new research centers entirely devoted to psychedelics opened at Johns Hopkins and the University of California Berkeley.

How psychedelics work on the mind is still somewhat mysterious, but we know they activate brain receptors normally triggered by serotonin. They appear to break apart habitual patterns of neural activity — which may be associated with depression or addiction — and help the brain to forge new connections and become more flexible. The psychedelic experience can vary wildly with the details of a person’s psychology, the specific drug and dose, the context or setting of a trip and a person’s expectations. But users frequently describe something like a dissolving or transcendence of the boundaries of the self, an expanded consciousness or profound sense of connection. That’s why plants with psychedelic properties have long held a central place in some spiritual traditions — the theo in entheogen means god.

Zalewski points to a 2006 study out of Johns Hopkins. Participants “say that their interactions with psilocybin are some of the most meaningful experiences of their lives, up there with the birth of a firstborn child,” he says. “It’s not the same as going down to the dispensary and picking up a joint.”

Research into psychedelic drugs may be flourishing, but in the U.S. that hasn’t yet translated into approval for their therapeutic, spiritual or recreational use. Branches of two Brazil-based religious groups, União do Vegetal and Santo Daime, won U.S. Supreme Court cases in the 2000s upholding their right to use ayahuasca for limited ceremonial purposes. But beyond that, psychedelics have not been approved for any legal use outside research. Just last month, Seattle doctor Sunil Aggarwal sued the U.S. Drug Enforcement Administration after the agency denied his application to make use of psilocybin in end-of-life treatment. Dr. Aggarwal argues that psychedelics should fall under “right-to-try” laws that give terminally ill patients access to investigational medications; Washington state adopted such a law in 2017 and a federal Right to Try Act passed the following year. So far, the DEA disagrees.

That’s where the decriminalization movement comes in. By instructing law enforcement to effectively ignore the law, jurisdictions can indirectly greenlight the therapeutic and personal use of psychedelic drugs. In 2019, Denver became the first U.S. city to decriminalize psilocybin. Since then, at least six more cities — Ann Arbor, Michigan; Cambridge, Massachusetts; Oakland, California; Santa Cruz, California; Somerville, Massachusetts; and Washington, D.C. — have decriminalized a broader array of entheogens. Last fall, Oregon voters approved not only the sweeping drug decriminalization measure noted above, but also a measure that specifically legalizes the use of psilocybin for therapeutic purposes. In Washington state, a Spokane group is running an initiative to decriminalize psilocybin.

Against this background, passing a nonbinding resolution through our progressive Seattle City Council should be easy — you might think. (It would be up to the mayor to transmit the instructions to law enforcement, unless the resolution is followed by an ordinance.) The greatest challenge may be simply getting their attention. Council members are accustomed to deluges of communications from hundreds or thousands of constituents, as well as pressure from powerful interest groups, on hot-button issues: for or against defunding the police, for or against taxing big business, for or against sweeping homeless people. With all the urgent crises our city is facing, will they make time for magic mushrooms?