There’s no real excuse to have so little canopy in SoDo. It doesn’t have to be ‘like the forgotten land.’ 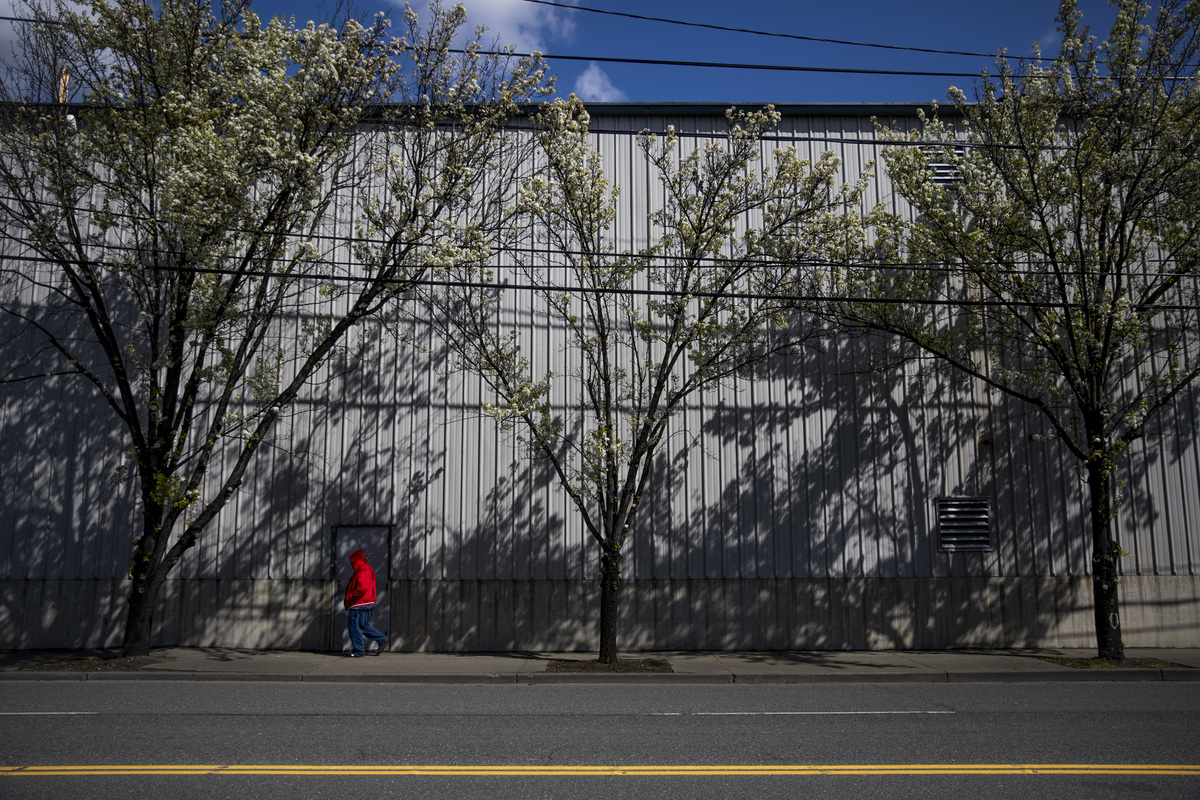 A row of trees line Airport Way South in Georgetown on March 30, 2021. The city has a goal of 30% tree canopy coverage and is currently sitting at 28%. Despite being 11% of Seattle’s land area, industrial areas like Georgetown contribute only 6% of the overall canopy cover. (Dorothy Edwards/Crosscut)

Recently, I went looking for trees in Seattle’s industrial district.

That might seem like a counterintuitive choice, but if you know where to look among all the factories and warehouses, you can find unexpected natural beauty, like a mature row of cedars clinging to the railroad tracks along East Marginal Way, or a small patch of shoreline access on the banks of the Duwamish, where a spunky young cypress watches ships go by.

These trees may not look like much compared with the more abundant greenery in other Seattle neighborhoods. But make no mistake: They are some of the most important plants in the city — and there need to be more of them.

According to Seattle’s most recent assessment, industrial areas are the only part of the city where we are “below target” in reaching our tree canopy goals. (The city hopes to achieve 30% overall tree canopy cover by 2037.) Industrial parts of the city contribute only 6% toward our city’s current canopy, despite making up 11% of our total land area.

There are obvious reasons why it is harder to plant trees in an area like SoDo: Concrete and tarmac abound. Vehicle clearance and sight lines are crucial. Industrial property owners would have to be brought on board, and they have different concerns than residents who want a pretty tree for their yard. But most experts I’ve talked to agree: There’s no real excuse for Seattle to have so little canopy in so large a space.

“There is no reason this should be [the case],” Stuart Niven, a local arborist and tree pruner, told me. “Trees require a relatively small area to be planted in and as long as the species is appropriate, they can evolve and adapt to relatively oppressive growing conditions, once they have been established.”

When Niven first moved to Seattle from Scotland, he spent nine months inspecting power poles for Seattle City Light, so he has firsthand experience encountering trees in parts of the city where most people don’t expect to see them. In fact, he was the one who directed me to the impressive cedars on East Marginal Way — a small grove of continuous conifer canopy along one of the busiest stretches of road in the city. But few efforts are being made to increase the canopy in these industrial areas.

“It’s kind of like the forgotten land in Seattle,” said Niven. 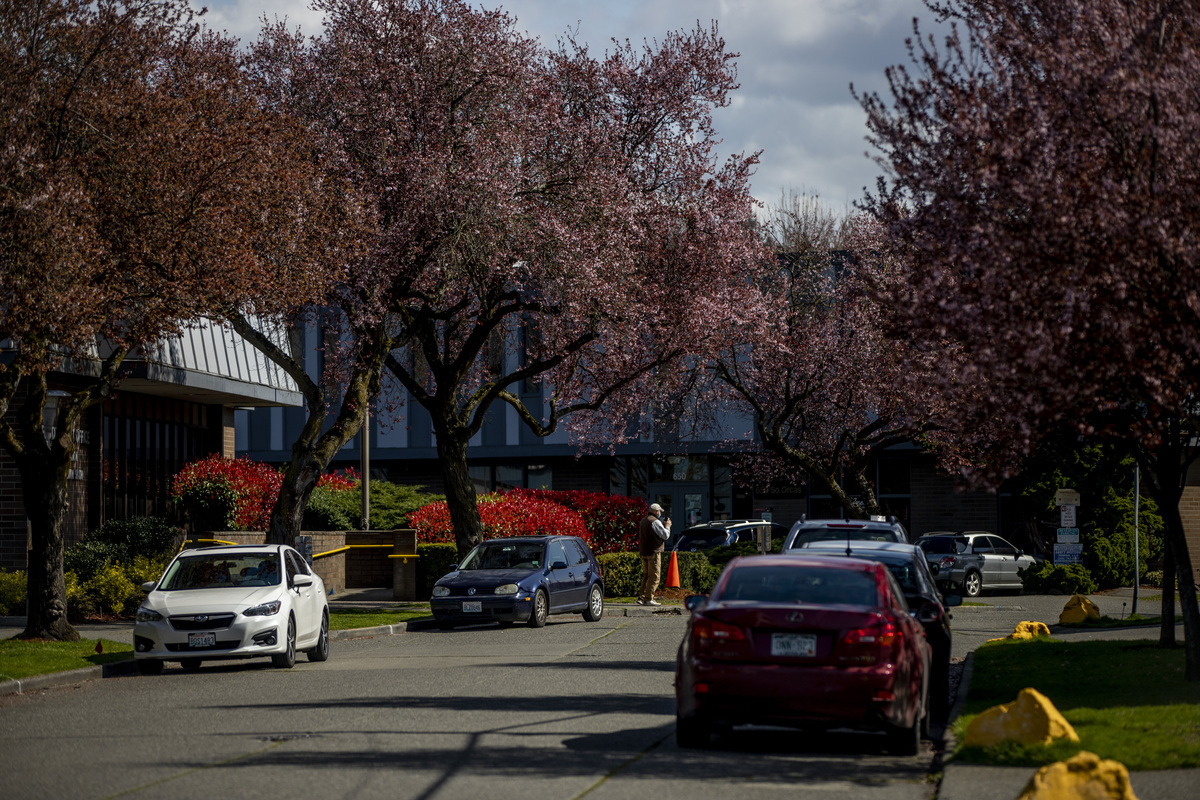 Cherry blossoms along South Orcas Street outside of the post office in the industrial district, March 30, 2021. The city has a goal of 30% tree canopy coverage and is currently sitting at 28%. (Dorothy Edwards/Crosscut)

Cherry blossoms along South Orcas Street outside of the post office in the industrial district, March 30, 2021. The city has a goal of 30% tree canopy coverage and is currently sitting at 28%. (Dorothy Edwards/Crosscut)

Current tree canopy initiatives are understandably and justifiably centered on the industrial-adjacent neighborhoods, like Georgetown and South Park, where more people of color tend to live. The Duwamish Valley Youth Corps, in partnership with the city, has been planting trees in places where canopy is needed to filter the air and reduce surface temperature. If you look at an overhead map of our tree canopy — or even a satellite image of the city — you’ll see that there is essentially an urban desert in our port and industrial areas, ringed by some of Seattle’s most diverse neighborhoods — a textbook case of environmental racism.

But the most effective way to improve the air quality in neighborhoods like South Park and Georgetown may be to fight the battle on both fronts. Without more trees among the industry itself — on top of the trees planted by the Duwamish Valley Youth Corps — those lower-income residential areas will always be fighting against a tide of polluted air that comes from elsewhere.

“The Youth Corps can get trees in the ground and get community members on board for maintaining trees on every single residential property in those neighborhoods and it’s still not going to be enough — because they’re intermixed and surrounded by industrial land,” Weston Brinkley, current chair of the Urban Forestry Commission, told me. (Since 2009, the Urban Forestry Commission has advised the city, without compensation, on all things trees.)

Brinkley said he sees a “huge amount of potential” to mitigate air pollution that reaches those neighborhoods by boosting industrial tree canopy.

Indeed, increasing our industrial tree canopy would bring about a bevy of benefits. If you look at thermal imagery from the Seattle summer months, for example, you’ll see that the vast, sparsely treed expanse south of downtown gets much hotter than the whiter, wealthier and more tree-covered neighborhoods in the north.

“All that concrete really absorbs a lot of heat in the hotter summer months, so it creates a heat island effect,” Joanna Nelson de Flores, managing director of restoration and stewardship at the advocacy group Forterra, told me. “Trees can help mitigate that.”

More plentiful industrial trees can also help keep pollutants out of the runoff that reaches the Duwamish Waterway while also fostering local biodiversity. You may not want to go birdwatching in SoDo anytime soon, but unless there are enough trees there, fewer birds — and fewer kinds of birds — will frequent places like Chinatown-International District or Georgetown.

“These days we’re thinking about creating continuous connected pathways for birds across our area,” Joshua Morris, urban conservation manager at the Seattle Audubon Society, told me. “And it is the industrial areas that are the big gaps.”

A few more trees, said Morris, could go a long way for our flying friends: “It’s astounding to me how little vegetation it takes to start attracting wildlife.” 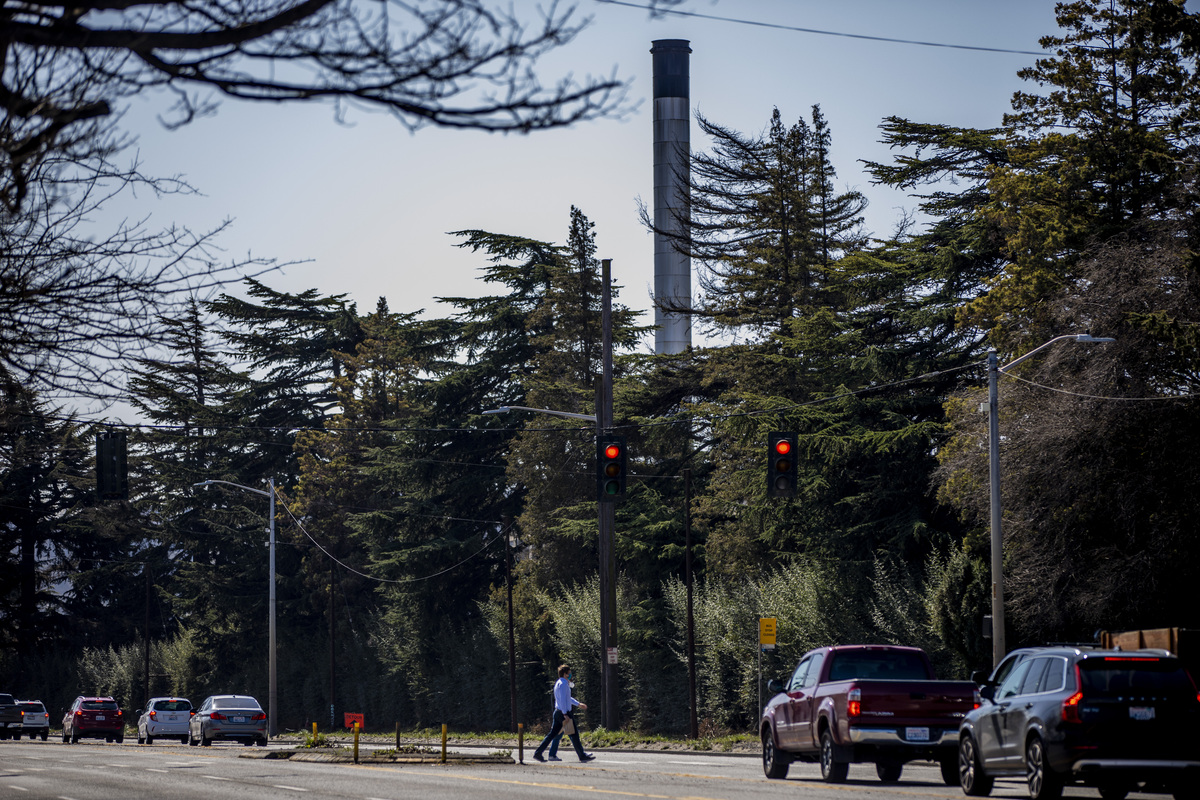 That’s a principle I learned firsthand on one of my recent SoDo vegetation adventures, when I found a family of birds living in a shrub outside the Pick-Quick Drive In. Arthur Lee Jacobson, author of Trees of Seattle, might know the city’s trees better than anyone, and he maintains that visiting industrial areas “on a calm Sunday morning can reveal hidden treasures of plant life,” like the one I found while waiting for a milkshake.

“Here and there exist diverse lovely plants, beautiful and pure against the grimy background,” Jacobson told me.

But creating more industrial canopy will require more communication between arborists and property owners, because so far that hasn’t happened.

“In my mind, the most dominant theme with these industrial areas is we don’t know,” Brinkley told me. “I think Seattle as a city hasn’t engaged with what’s possible there. We haven’t talked to the business owners, to the various constituencies and stakeholders. We don’t know specifically what the concerns are or what the limitations are. It could be that a huge swath of these communities are totally supportive and would love to have more trees, but I don’t think the outreach has happened. I think there’s been a lot of stereotyping and assumptions put in place.”

Chief among those assumptions is the idea that industrial property owners and businesses would have an automatic resistance to trees, even though a quick stroll or drive through the area would suggest that several have found otherwise. (I’m particularly fond of the tall trees and climbing vines near an electrical supply store on South Lander Street.

But even if there were such resistance, there are plenty of ways to fit trees onto industrial properties without interrupting regular business and without incurring burdensome maintenance costs.

Niven points out that there are “many new varieties of tree species” that have been specifically tailored to be “columnar,” fitting into small spaces without expanding too far beyond them, thereby preserving vehicle clearance.

And Lou Stubecki, who manages the city’s Trees for Seattle program, speculated that there’s one simple trick to be tried: “The more we can convince people to invert their parking strips into planting strips, the better off we are.”

Ultimately, though, not enough is happening right now to boost tree canopy where it could make one of the biggest environmental impacts. I asked Seattle’s Office of Sustainability and Environment what efforts are being made to increase tree canopy in industrial zones specifically. A spokesperson acknowledged that the city is “below target” in those areas, but highlighted progress being made in residential swaths of the Duwamish Valley. The spokesperson said a forthcoming assessment in 2022 could “set up a meaningful discussion with community on where to prioritize tree canopy efforts.”

Perhaps in the future, those industrial parts of the city will no longer be forgotten lands as far as greenery is concerned.

It would seem that Seattle has everything to gain and nothing to lose by finding space for a few more trees among the cranes.