Recall in Seattle: The roots and realities of a populist process

The effort to remove city councilmember Kshama Sawant is just the latest in a litany of attempted ousters that began in the Progressive Era. 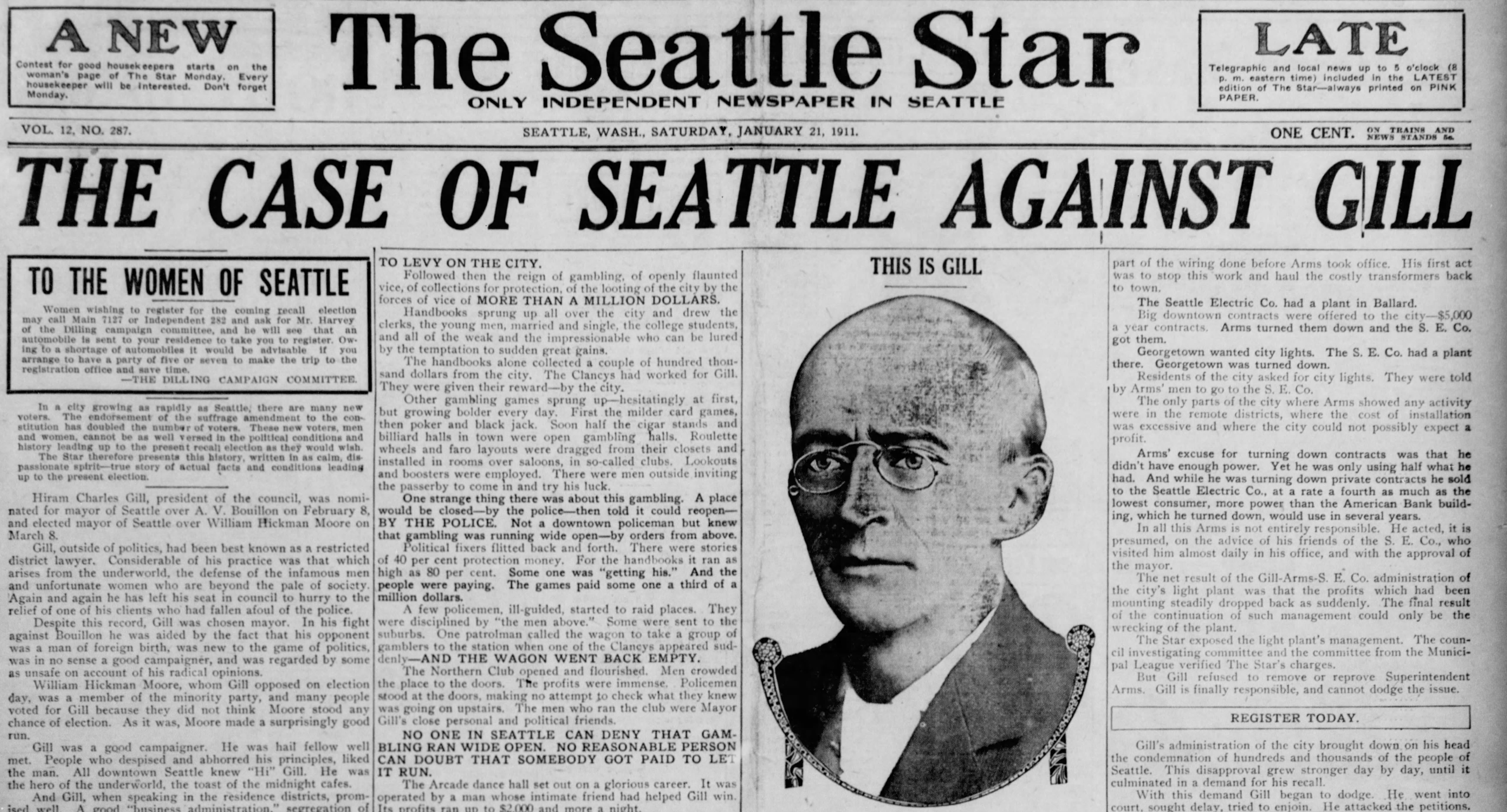 An issue of The Seattle Star from Jan. 21, 1911. The Star supported the recall of Mayor Hiram Gill.

Judging by my mailbox, the effort to place a recall of Seattle City Councilmember Kshama Sawant on the November ballot is heating up.

Last week, for instance, I received an unsolicited recall petition to circulate for signatures. The petition cites three main issues with the socialist councilmember: That she used city resources to support a campaign (she’s admitted to that and been fined), that she led protesters to Mayor Jenny Durkan’s residence, even though the address was protected by state confidentiality laws, and that she let protesters into City Hall when it was closed to the public, in violation of COVID-19 protocols

Soon after the recall petition came a flyer from Sawant’s “Solidarity Campaign” alleging the recall is a “right-wing” effort and pointing out that one of the recall’s donors, downtown developer Martin Selig, is a “billionaire Trump donor.” It refers to the recall as “voter suppression by another name.”

I then received an oversized card in the mail declaring that it is Sawant who has been actively working against Democrats and, by opposing Hillary Clinton in 2016, she “helped get Trump elected.” It also mentions that she criticized Bernie Sanders for endorsing Biden in 2020. The card shows an image of Trump giving a thumb’s up.

Running against Trump is a successful tactic in this deep blue city, but what does the invocation of the former president by both sides tell us about the recall? It tells us, as does history, that a recall effort is no more or less than a political campaign, but one almost always driven by extreme frustration. An uptick in the number of recall attempts in recent years has been attributed to voter anger. But successful recalls in Washington are still rare. Most efforts either fail to pass muster with the courts or cannot get the required number of signatures. Recent attempts to recall Durkan and the entire Seattle School Board have failed, though both efforts sharpened arguments against incumbents.

To win or beat a recall requires money, organization and a blistering campaign. They are not for the timid, and threatened incumbents find they must fight back energetically to fend them off. Historically, they are not so much acts of “voter suppression,” but rather were conceived as a populist tool to hold officeholders accountable if they proved corrupt or violated their oaths of office. They were part of the Progressive reform movement of the early 20th century that included citizen initiatives and referendums.

The very first recall in the city’s history provides a dramatic example. A show of power by a previously excluded class of the electorate, it featured bitterness and rancor, and served as a lesson that a successful recall cannot assure good government afterward.

Hiram Gill, a longtime city council member, was elected mayor of Seattle in 1910 by a narrow margin. The ongoing question in Seattle was how “open” it should be. Should vice, such as prostitution and gambling, and dens of iniquity, like saloons, be tolerated? Many in the business community said yes. They viewed vice as necessary for the large population of male laborers — from seamen to loggers to miners — the city needed to grow. And vice filled the coffers of city officers and selected “vice lords,” who received payoff money that fueled Seattle’s policing and politics. Seattle had made a mint off of the Klondike gold rush as a wide-open city. Why kill the golden goose?

The city was of two minds, however. As the majority male frontier city grew and transitioned to a more family-friendly kind of place, vice still flourished but some argued that it should be contained within certain districts, below Yesler Way for example. In the late 19th and early 20th centuries, a sequence of mayors alternated between being pro or con on an “open” Seattle.

But the entrenched vice sector did not stand still. Containment was difficult as new vice operations sought to expand, and as Seattle grew, new real estate and the lucrative nature of sin led to the emergence of a full-blown vice on an industrial scale. A prime example: During Gill’s administration, the city leased property to private vice operators for a 500-room brothel on Beacon Hill. Gill wasn’t containing vice but spreading it, critics alleged. And money was flowing into the coffers of corrupt pols and cops. A payoff head “tax” generated $10 per month per prostitute. The superbrothel on Beacon Hill was a gold mine.

Gill, too, was supportive of a corrupt police chief, Charles “Wappy” Wappenstein, the chief enforcer and enabler of the vice rings. Those who paid were tolerated; those who did not were roughed up, arrested or run out of town. Still, such tactics had the support of much of the business community. Wappy’s strong hand kept the system working.

But something changed after Gill’s election. The blatant coziness between Gill and the vice lords riled social reformers, like the Presbyterian minister Mark Matthews, and they began crusading against vice, Wappenstein, and the system Gill represented. The national press pointed out that Seattle was one of the top cities in America for sex trafficking of women.

Adella Parker, a suffragist and political activist, had drafted and successfully lobbied for a recall law in the Seattle City Charter. The council passed it. She then used that law to start a petition drive against Gill. She wrote the petition and paid for copies to be circulated herself. She was president of the Women’s Suffrage League, and later served in the state House of Representatives.

The new mayor had been in office less than a year, when the recall drive was initiated, supported by groups such as the Public Welfare League and the Forces of Decency — mostly powered by progressive women. And women were newly enfranchised to vote by amendment to the Washington Constitution in 1910. In other words, a large faction that didn’t have the vote when Gill was elected, women, now had electoral muscle to flex.

The Seattle Star newspaper quoted from the recall petition that circulated in the fall of 1910, which called Gill “incompetent and unfit,” saying that he had appointed similarly incompetent men for personal reasons, had “failed enforcing criminal laws,” and had “permitted Seattle to be home and refuge for the criminal classes.” Gill was also called a “menace to the business enterprises and moral welfare” of the city.

Although Gill filed lawsuits, the recall passed court muster and went on the ballot for early February 1911. If the recall were successful, a new mayor would also be elected to finish the term. The reform candidate was George Dilling, a bland real estate man who served the reformer’s purposes.

Seattle’s three major daily papers took sides: The Seattle Times was for Gill, and Blethen family members, including Times Publisher Alden Blethen, were tied to him through grand jury investigations. The Seattle Post-Intelligencer and the Star took after Gill hammer and tong. Reporting and commentary blended into one. Allegations from each side flew. Gill’s people were said to have intimidated opponents, and there were reports that Wappy’s cops were cracking down on businesses that did not donate to Gill’s defense. Gill argued that he was just an honest guy who was being attacked by “a restless and disgruntled minority.”

The Times alleged that the Welfare League was using cowardly tactics by trying to scare off some “decent” women who were trying to register to vote. “No such attempted intimidation has ever taken place in a Seattle campaign,” the paper thundered. The Times alleged voter suppression: “The only way to defeat mayor Gill is to keep down the vote.” The Times went on to claim that the Welfare League women who voted against Gill were in fact “scarlet women.” Prostitutes were tolerated, but not as voters apparently.

When the vote took place, Gill lost by a large margin of about 6,000 votes — most of the margin supplied by the some 22,000 newly registered women voters. The recall got national attention. A New York Times headline declared “Women in First Vote to Oust Seattle Mayor.” It described the turnout as “women in automobiles side by side with sisters carrying market baskets.”

Gill did not go quietly. He tried to stall his departure from office, but Dilling said no. A campaign to recall Dilling was started by Gill's forces, a group that Seattle Republican editor Horace Cayton called “gamblers and thugs.” The business community quashed the effort, however, saying more political turmoil would not benefit Seattle’s image or help the business climate.

Dilling served out Gill’s term but did not run again. Gill ran for mayor again, but lost to progressive George Cotterill in 1912. Police Chief Wappenstein was fired and convicted of corruption and sent to the state penitentiary in Walla Walla. Gill, however, avoided jail, and was elected mayor a second time in 1914, this time as a professed reformer in support of a “closed” town. He was reelected mayor in 1916 but was defeated handily for reelection in 1918. He died of Spanish flu not long after.

Despite epic corruption, a triumph for progressive women and a partial clean-up of City Hall, the recall settled little when it came to Hiram Gill. For politicians like Gill who don't have a very developed sense of shame, a recall was a mere setback, not the knockout that was intended.