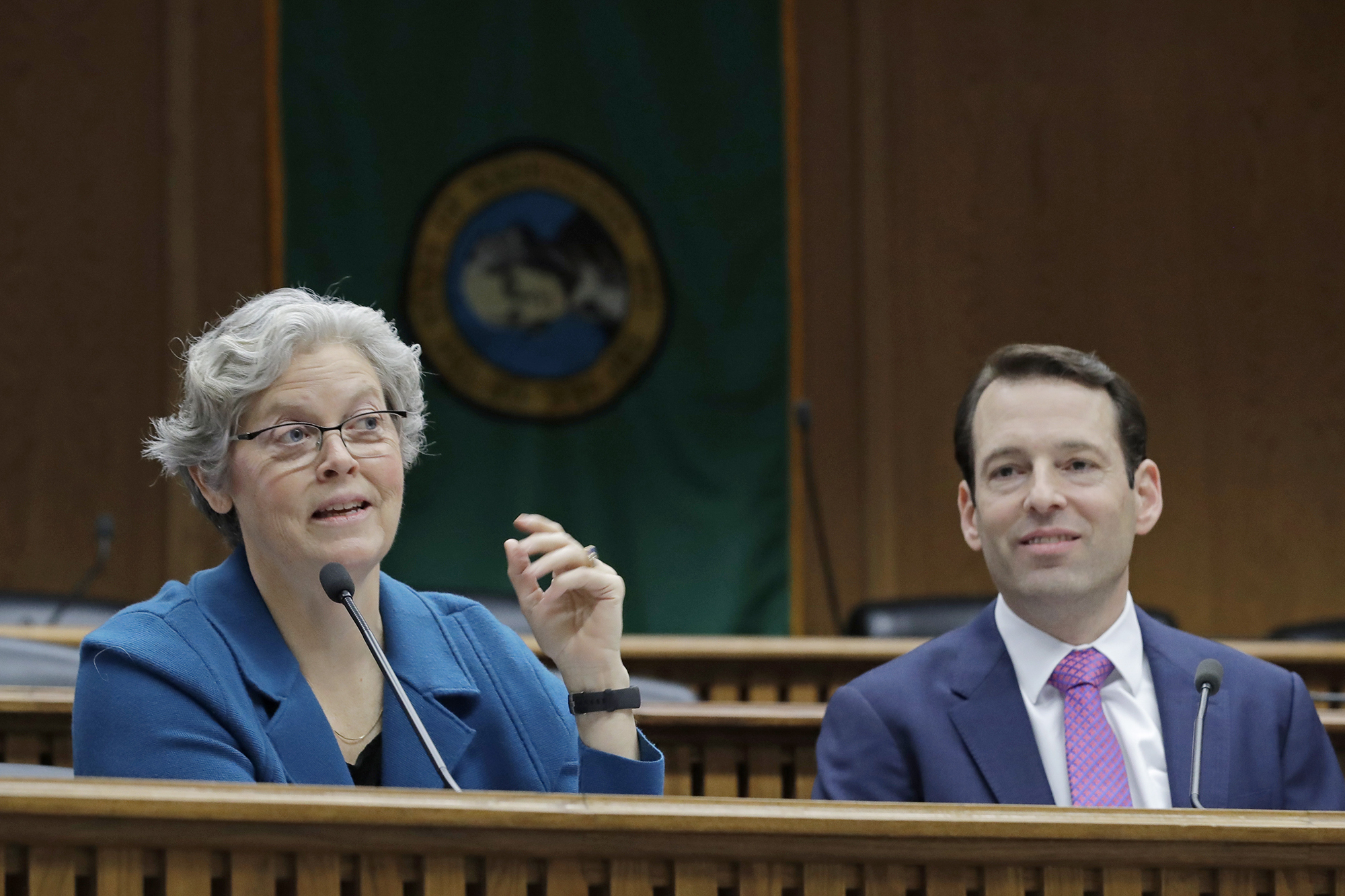 The Washington state Legislature wrapped up an eventful session last week, passing a raft of major legislation on everything from climate change and child care to policing and progressive taxation. Just how major are these accomplishments, and what do they portend for Washington state politics?

Seattle Times columnist Danny Westneat weighed in last week, opining: “It’s Seattle’s state now in politics, and everybody else is living in it.” His commentary is actually a lot more nuanced than the headline suggests. But the notion that Seattle somehow pulled one over on the rest of the state struck a nerve among Democratic Party leaders.

In a tweet, Lisa Brown, director of the Washington State Department of Commerce and former state Senate majority leader, pointed out that legislators in key positions hail from all over the state. “#Seattle don’t be Narcissus,” she concluded.

“Yea, only a guy who can't see beyond Seattle would write this,” tweeted Speaker of the House Laurie Jinkins, D-Tacoma.

We Seattleites are often guilty of acting like the whole state revolves around us, so I thought it would be worthwhile to dig a little deeper.

“The big policies that we passed this year actually benefit rural, Central and Eastern Washington as much or more than they benefit Seattle,” Senate Majority Leader Andy Billig, D-Spokane, told me. He pointed to support for small businesses; the Working Families Tax Credit, which will put money in the pockets of low-income families; and a historic bill extending overtime pay to agricultural workers, which Billig says will help both farmworkers and farmers.

“Even the capital gains tax will be paid by very few people in Central and Eastern Washington,” says Billig. “Yet the benefits from the investments that are paid for by the tax are particularly helpful and needed there. Access to affordable child care is very much a rural problem as much as an urban problem.” The idea that all these policies are Seattle-focused, he says, is “more of a divisive narrative than a reality.”

The notion that progressive legislation always starts in Seattle is also untrue, according to Jinkins. “I’m the first person who filed the capital gains tax 10 years ago,” she says, “and I’m from Tacoma.”

Far from a sudden hostile takeover by Seattle, Brown sees this session’s accomplishments as the fruit of years of work and a back and forth between grassroots groups and elected officials.

“That [interaction] happens all over the state, all over the country, and that creates the dynamic to get votes for bills,” she says.

Sensational news reports might obsess over “CHAZ”/“CHOP” in the heart of Seattle, for example, but that doesn’t mean the rest of the state is happy with the policing status quo. “Otto Zehm was killed by police in Spokane years ago,” says Brown, “and there’s been a movement around police reform here that’s been about here, not about Seattle.”

These are all good points. But let’s keep going.

Westneat calls this legislative session a political breakthrough for the progressive left, but, believe me, many progressive lefties I know are far from bowled over by the results. It’s great that after a decade of false starts a capital gains tax finally made it through. But we wanted to tax the obscene wealth of billionaires, too! Or at least bump up the tax rate on their estates when they die. Even many red states, from Montana to South Carolina, have long taxed capital gains and, yes, personal income. Here in Washington we’re just way, way behind.

Democratic lawmakers might cheer the passage of a cap and trade carbon pricing system, but many environmental justice activists are deeply skeptical of this market-centered approach, questioning whether it will really cut emissions overall or reduce toxic pollution in the most impacted communities. The Legislature also recriminalized drug possession in the wake of the state Supreme Court’s Blake decision, despite objections from advocates who wanted to chart a new course. Olympia doesn’t appear poised to kick its addiction to new highway spending anytime soon, either.

Sure, you might say, the left always wants more. But consider this: Our Legislature’s actions are actually pretty tame when stacked up against the things Joe Biden, that radical in the White House, has been doing and proposing. Giving money away willy-nilly. Taxing the rich. Where’s the moderation, Joe? If it’s suddenly Seattle’s state, then it’s Seattle’s nation, too — and I guess everybody else is just reluctantly living in it.

This national viewpoint lays bare the absurdity of the all-powerful-Seattle story, so maybe we should look more critically at its source. As Westneat reports, it was Sen. Doug Ericksen, R-Ferndale, who complained about Seattle’s “radical” politics taking over the state. In other words, we’re talking about sour grapes from a politician who saw his party’s attempts at obstruction, normally so successful, partially fail this year.

Olympia has often felt like a place progressive ideas go to die. Legislation to mandate paid sick days passed the Democrat-controlled House three years running, 2014-2016, but stalled in a Senate controlled by Republicans and a couple of conservative Democrats; a bill to raise the minimum wage met the same fate in 2015 and 2016. Eventually advocates bypassed the Legislature and successfully went to the ballot instead.

Anti-Seattle sentiment in the Legislature, especially virulent among Republicans, though not limited to them, is nothing new. “Everybody loves to hate Seattle,” says Jinkins. Perhaps we should ask what that sentiment has been accomplishing all these years.

As a blinkered Seattleite myself, I don’t pretend to fully understand the ill will toward Seattle, such as it exists, in the rest of the state. I’m sure there’s some disdain for self-righteous liberal political correctness, the counterpart to hyperliberal Seattle’s scorn for Trumpism. And there’s probably some resentment of big-city affluence, Amazon and all that new-economy tech money sloshing around the Emerald City. There’s probably other stuff going on, too.

What I do know is that right-wing and wealthy interests have long whipped up these sentiments and manipulated them to their advantage, striving to undermine politicians and policies that threaten their entrenched power even a little bit. Whether it’s labor standards or renter protections or aid for working families, it can all be cast as part of the radical agenda Seattle wants to impose on the whole state. Brown remembers the negative ads warning voters of her “Seattle values” during her first run for state Senate. “I’ve never had anything to do with Seattle,” she says. “I grew up in small-town Illinois and arrived in Spokane to teach at Eastern Washington University.” Of course, that wasn’t the point.

For decades, anti-Seattle narratives have been used to stymie broadly popular, progressive policies that would benefit the vast majority of Washington state residents. With this legislative session, the winds might be shifting. The question we should be asking is not whether Seattle is gaining power in Olympia. It’s whether the right’s divide-and-conquer tactics are finally losing their edge.