The candidates are competing to give us money with no strings attached. How do their ideas stack up? 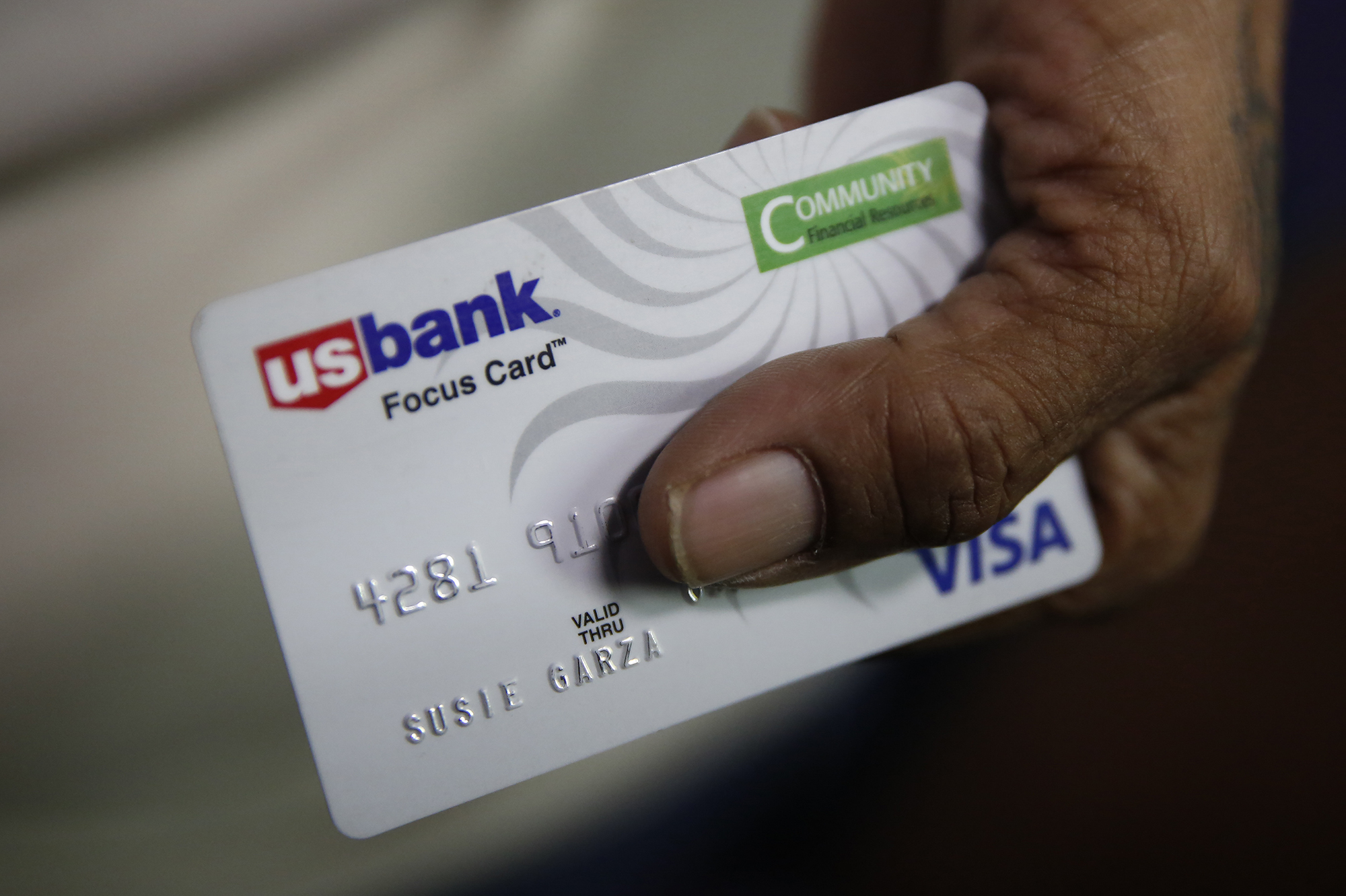 In this Aug. 14, 2019, file photo, Susie Garza displays the city provided debit card she receives monthly through a trial program in Stockton, Calif. A study of people in California who received $500 a month for free says they used it to pay off debt and get full-time jobs. A pair of independent researchers reviewed data from the first year of the study and released their finding on Wednesday, March 3, 2021. (AP Photo/Rich Pedroncelli, File)

Guaranteed income is an old idea that’s lately sprung to new life. Last fall I wrote a series (one, two, three) about the concept and whether it could be coming to Seattle. Since then, Mayor Jenny Durkan appears to have dropped the thread, but other cities are forging ahead. In California, both Compton and Oakland launched guaranteed income pilots this year. Closer to home, Tacoma Mayor Victoria Woodards is championing one set to start this summer.

But don’t give up on Seattle yet! Last week, Deputy Mayor Casey Sixkiller entered the mayor’s race. His platform envisions granting 16,000 Seattle households $500 a month for a year, no strings attached. I asked around, and, sure enough, handing out money is a popular idea among Seattle mayoral candidates. Guaranteed income is poised to become a hot issue in the upcoming election.

A growing body of research on guaranteed income and its more visionary cousin, universal basic income, leaves little doubt that these are promising ideas. But, as so often, the devil is in the details. Who should get the money? Should it pile on top of other social welfare programs, or replace them? When considering a Seattle program, how big should it be, and where should the funding come from? And in a city facing many urgent crises, how should guaranteed income rank relative to other priorities?

Sixkiller doesn’t have all the details worked out; as mayor, he says, he would spend some time on program design and community engagement. But he has no doubt of the need.

“Too many families are living on the edge,” he says, “hardworking families having to choose between paying rent and feeding their kids.” He thinks it might make sense to choose several target populations. “It could be families with kids, expectant mothers, [and/or] there could be a geographic focus.” Black and Indigenous families could certainly use a boost, he says.

How to pay for it

Sixkiller’s pilot would be the most ambitious in the country, by far: Compton’s, the largest in progress, includes 800 people. Los Angeles Mayor Eric Garcetti recently proposed to give 2,000 families $1,000 a month for a year, which would cost $24 million. Sixkiller’s 16,000-person plan comes to $96 million.

When I asked Sixkiller where he hopes to find this sizable chunk of change, he pointed to the federal funds Seattle is receiving through the American Rescue Plan Act of 2021. I pointed out that fully half of these funds will be spent this year, and the other half, about $120 million, is expected to be allocated this fall for spending in 2022.

“If this is an idea that people really are interested in, we don’t have to wait,” Sixkiller says. “The council could decide now. Community could decide now that we need to hold back some money … and work to actually put something like this in motion.”

It’s a little odd, maybe even presumptuous, for a candidate’s plans to rely on funds that will be allocated before a new mayor even takes office. (This is, by the way, highly sought-after money; Compassion Seattle’s backers also want it for their proposed charter amendment.) But Sixkiller says that even if his soon-to-be-former boss and the current city council don’t adopt his guaranteed income idea this year, he will make it his top priority if he’s elected mayor.

How about a city income tax, which Mayor Durkan mentioned last year as a possible funding source for a guaranteed income pilot? Sixkiller didn’t answer my question directly, but after some prodding said he’d be looking at “all the tools available to me,” whether that means “existing revenues or going to seek new revenues.”

Lorena González, current Seattle City Council president, is more upfront about who should pay for a guaranteed income.

"The super-rich and biggest corporations who've done well in Seattle should do well by Seattle by supporting some form of guaranteed income to keep money flowing through our communities,” she said in an email statement. She added that she would work closely with U.S. Rep. Pramila Jayapal to explore federal funding opportunities.

Is now really the moment for a guaranteed income? Former Seattle City Councilmember Bruce Harrell isn’t so sure.

"As we emerge from a pandemic and address some of the root causes of the homelessness crisis, I believe we should lead with universal basic health care as a way to address fundamental inequities in our city,” he said in an email statement. He points to San Francisco’s Health Care Security Ordinance as a success story, “a municipal model that prevents vulnerable people from falling through the cracks.” If elected, he said, he would be open to exploring guaranteed income, but health care and housing come first.

Colleen Echohawk, executive director of the Chief Seattle Club, is also skeptical that guaranteed income should be a top issue.

“My number one priority as mayor will be to immediately solve the humanitarian crisis of homelessness in Seattle,” Echohawk said in an email statement. “It’s going to be hard. It will require laser focus and it will be expensive. It will involve significant mental health services and addiction treatment.” Once significant progress has been made on homelessness, she said, then she’d be interested to work with the council on a guaranteed income pilot.

But architect Andrew Grant Houston, who currently works in the office of Seattle City Councilmember Teresa Mosqueda, sees a guaranteed income as one way to tackle homelessness. He pointed to a 2018 study in Vancouver, Canada, which gave 50 homeless people a lump sum of $7,500 (Canadian dollars) each and interviewed them over the course of a year. Compared with a control group, they were better able to find stable housing and save money; they spent more on necessities and decreased their spending on drugs, alcohol and tobacco.

Houston plans to propose a pilot that would grant 2,500 homeless people $1,000 a month for a year. He hopes to fund the program with money drawn from the police budget. “By providing those that are currently unhoused with resources, we would be relying less on the police to interact with our unhoused neighbors in the first place,” he says.

Former state legislator Jessyn Farrell agrees that guaranteed income is an idea whose time has come, but she favors a different approach, believing that universal policies ultimately fare better than ones that target the poor. “The more broadly applicable a policy is, the more lasting and popular support it has,” she says.

Farrell says her campaign will be rolling out a free universal zero-to-5 child care plan in the next few weeks — including something like a guaranteed income for families, whereby the city would match the roughly $300-per-child national payment proposed by President Joe Biden. This might be phased in, but she envisions a permanent program, not a pilot. Her campaign is still working out what this might cost.

But how to pay for it?

“We are going to be building on the progress at city and state levels to rebalance our tax code,” she says. Basically, that means that “the very wealthiest folks should be paying into the great high-quality programming that people in our city want.” Among other options, says Farrell, she’s looking at a city-level wealth tax.

Farrell points out a couple of challenges for any guaranteed income program. One is to ensure that it’s not letting employers off the hook, becoming, for example, “a way to subsidize Walmart to pay substandard wages.” Another, specific to Washington state, is our constitutional prohibition on the gift of public funds. Governments can hand out cash, but only to the “poor and infirm” or in the name of economic development. Guaranteed income programs that target lower-income households can probably squeak by this restriction, but Farrell’s more universal vision could face difficulties. Still, she thinks a strong argument can be made that a child benefit is essential to economic development.

“One thing we’ve discovered in the pandemic is that child care is absolutely fundamental to people being able to go to work,” she says.

There’s one more hurdle that any local guaranteed income program will have to grapple with: how it interacts with other social welfare programs. None of the candidates I spoke with pulled an Andrew Yang and proposed replacing other benefits. Nevertheless, many federal and state programs feature “eligibility cliffs,” and if a check from the city counts as income, that could push some people over the edge. For example, if a family receiving guaranteed income thereby becomes ineligible for free health care, that could negate or greatly reduce the value of the city’s support. Any program must be carefully designed to minimize such effects.

Despite my nitpicking about funding, I’m glad Sixkiller has given guaranteed income a central spot in his platform. That’s part of what running for office is about — injecting big, bold ideas into the public sphere and making people think and talk about them. Handing out $100 million in cold, hard cash to low-income Seattleites, no strings attached, is nothing if not a big, bold idea. It means trusting poor people to know what is good for them. I hope all the candidates continue to develop and debate their visions of guaranteed income — what a program should look like, how to pay for it — between now and the August primary, when we start marking our ballots to choose Seattle’s next mayor.