Why our public memory is key to post-pandemic recovery

Two Northwest scholars on what the history of the 1918 flu can teach us about our return to normal today. 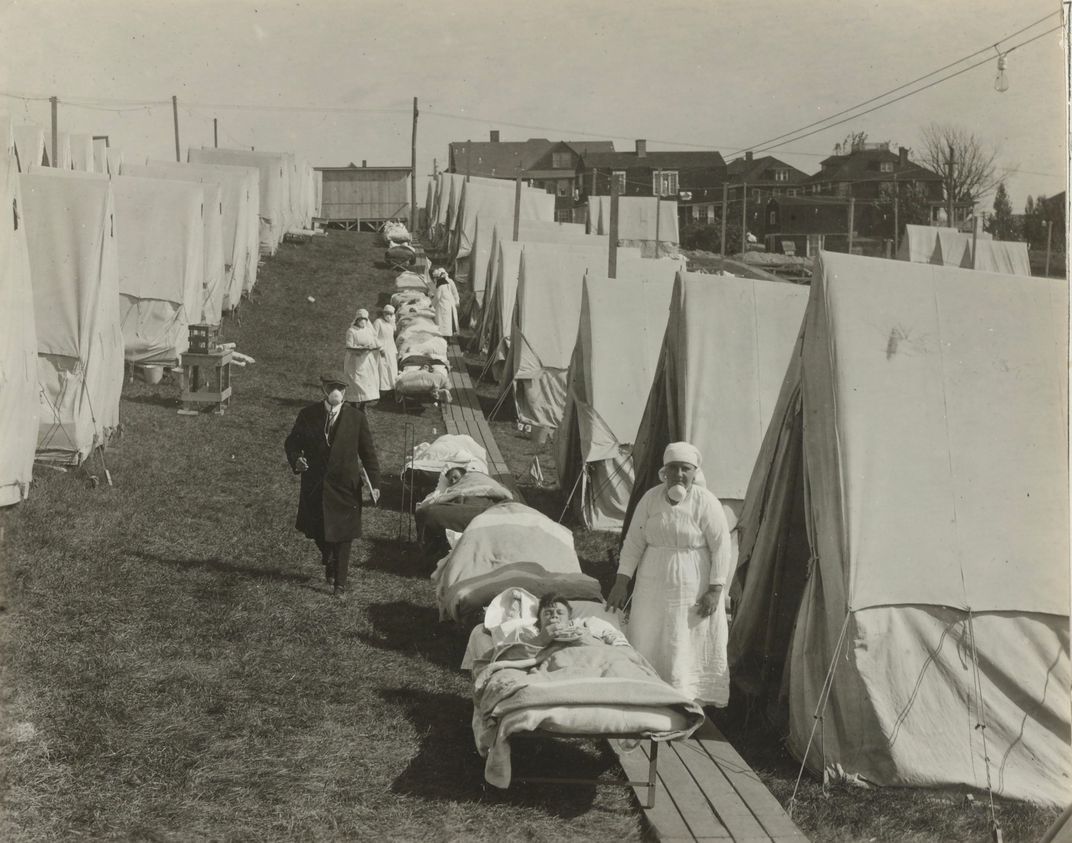 An emergency hospital in Brookline, Massachusetts, during the 1918 influenza pandemic. (National Archives)

The COVID-19 pandemic is not over, but as vaccination rates increase, a desire to return to normalcy is, well, normal. What that normal will look like is a giant open question.

A recent Crosscut/Elway Poll suggested that people are both eager to resume a regular routine, but also cautious about taking public transit or shaking hands, among other things. Talking with friends and family, I have heard a variety of post-pandemic predictions and plans. One single friend who works in health care told me she can’t wait to kick up her heels. Others I know plan to continue to wear masks in public places, like supermarkets or events. It’s not that they’re skeptical of vaccines, just that during the past year they haven’t been sick: no colds, no flu. A mask for many is a way to limit seasonal bugs.

So, some are racing to the new normal, others tiptoeing. But for many people, even without true herd immunity, the American desire to move on has kicked in. This is taking shape in terms of large proposals for federal spending on recovery and in terms of denial. Too often we pretend that the bad stuff never really happened. Even now, many have stopped mentally tracking the pandemic’s domestic death toll — closing in on 600,000 people in the U.S. — let alone thinking about the post-pandemic impacts on millions of others.

All this makes the issues of “what’s next” and “what have we learned” more important than ever. An excellent recent article from the Smithsonian Magazine, “What Caused the Roaring Twenties? Not the End of the Pandemic (Probably),” looks at what the history of the 1918 pandemic has to teach us, and draws on the knowledge of a couple of Northwest scholars.

The aftermath of the Spanish flu of 1918 is inextricably connected with the trauma and triumph of World War I. But there were many societal complexities at play, many of which were in play long before: women getting the vote, the resurgence of racism and rise of the Ku Klux Klan, a surge in income inequality and the excesses of the Jazz Age, Prohibition, anti-immigration activism, a boom in urbanization and rapid development and adaptation of new technologies. Cause and effect of the pandemic is tough to tease out. At best, the 1920s aftermath resulted from a hodgepodge trends and developments.

But one thing we do know is that the pandemic itself resulted in an unknowing. It took five or six decades for books to be written about it, and public memory was scant. One expert consulted by the Smithsonian is Nancy Bristow, history professor at the University of Puget Sound. Her book, American Pandemic: The Lost Worlds of the 1918 Influenza Pandemic, looks at a public health crisis that was largely written out of the history books. In 2012, Crosscut ran an interview with Bristow in which she talked about the American attitude of leaving the past behind:

“We see again and again, in the aftermath of catastrophe, how quickly Americans want to look to their future and forget about their past. And that’s not a very healthy way to live. The reality is that you have to contend with tragedy, with losses, and with the nation’s past to build the brilliant future that we all want.”

The victims are not just those who died, but bereft families left behind, orphans, those harmed by the inequities — racial and economic — of health care, the mental impacts of fear and isolation, or the effects of the virus itself on long-haulers. Remembering, Bristow argues, is an important part of healing and recovery.

Tom Keogh, writing in The Seattle Times’s Pacific NW Magazine, weaves together Bristow’s pandemic work and her new book on the 1970 Jackson State shootings of Black students, another case of collective amnesia. In the story, Bristow says it’s not just important to remember the past but to reckon with how we forget:

“An important part of what historians do is not only explore forgotten moments, but to try to figure out the process by which amnesia sets in and the past is erased. … This is work I have been trying to do, to literally look at the process of that erasure.”

In other words, in moving on we exercise selective memory. Some things we choose to remember — World War I — and other things we choose to forget, like the Spanish flu, or we focus on the killings of white students at Kent State rather than the murder of Black students at Jackson State. Normalcy involves selective memory. What does that say about us?

When I wrote my first article about the pandemic, in March of 2020, Bristow told me we should remember those who have suffered losses and to tend to those people during their “long-term healing.” And that might not be just a few people, as outlined by another Northwest scholar who was also consulted for the Smithsonian’s story. He is Steven Taylor, a University of British Columbia professor and clinical psychologist whose 2019 book, The Psychology of Pandemics, was ahead of the coronavirus. Taylor attempts to quantify some of the mental health damage of the current pandemic, reports the Smithsonian:

“[Taylor] expects the Covid-19 pandemic to psychologically impact between 10 and 20 percent of North Americans (a number sourced from ongoing surveys and past research on natural disasters). Typically, one in ten bereaved people go through “prolonged grief disorder,” Taylor notes, and for every pandemic death, more family members are left mourning. Studies show that one-third of intensive care Covid-19 survivors exhibit PTSD symptoms, and first responders already report deteriorating mental health. Even people with a degree of insulation from this firsthand suffering might still experience what Taylor calls ‘Covid stress syndrome,’ an adjustment disorder marked by extreme anxiety about contacting Covid-19, xenophobia and wariness of strangers, traumatic stress symptoms like coronavirus nightmares, concern about financial security, and repeated information or reassurance seeking….”

In America, access to mental health care is generally worse than access to regular health care and has been exacerbated by the pandemic when needs are high but access is limited by cost, lack of insurance coverage and diminished in-person sessions for treatment and therapy. We do know more about the effects of trauma and treating PTSD, which is a good thing if people can get the help they need. But we’re also still learning about the virus’s impact on the brain and the cause of neurological symptoms in some COVID sufferers. In other words, if Taylor is right and the scale of the crisis as predicted bears out, a large challenge looms that we are ill-prepared to deal with clinically.

While we’re all interested in what comes next and putting the pandemic behind us, the future is inextricably tied to the past. This pandemic is much more extensively documented than the 1918 flu. We have much better numbers and statistical methods, more effective treatments and a media that has vigorously covered it. Part of a strong new normal will require bringing what we’ve learned along with us to correct mistakes and reenvision a better, safer and, we might hope, saner world ahead.