Would Compassion Seattle lead to fewer tents or more? Nobody knows

Even informed opinions on how the proposed charter amendment would actually tackle homelessness vary wildly. That should be a red flag for voters. 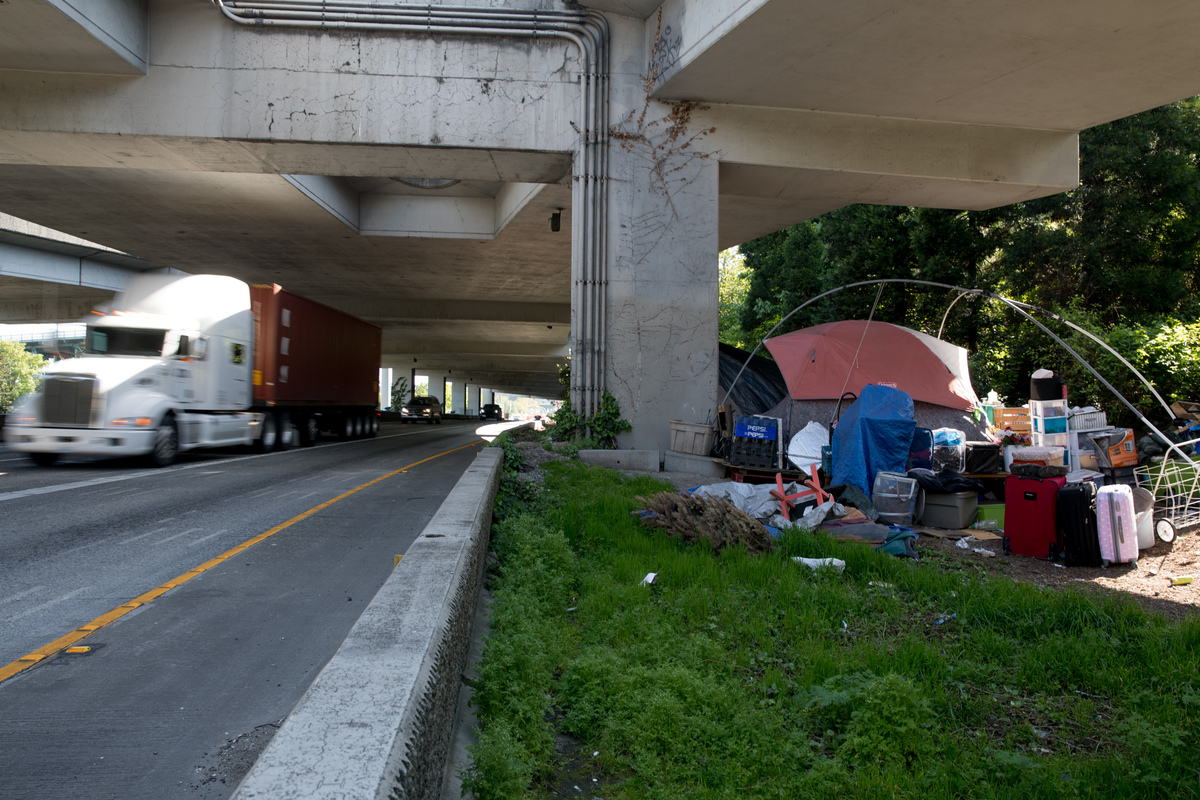 A homeless encampment underneath a freeway overpass in Seattle. (Matt M. McKnight/Crosscut)

The business-backed “Compassion Seattle” campaign hopes to force the city to ramp up its response to the homelessness crisis by amending the Seattle City Charter. A few weeks ago I dissected the campaign’s highly dubious claim that existing funds are sufficient for this mandate, which includes creating 2,000 units of shelter or housing, with staffing and supportive services, in one year. Now let’s take a look at another dimension of the proposed charter amendment: sweeps.

Early drafts of the proposal were, as PubliCola reported, very obviously centered on clearing encampments. One, for example, directed the city Human Services Department to publish and implement “a plan to provide services to individuals experiencing homelessness” — a plan that “shall require the cleaning and removal of unauthorized encampments in public spaces as these services are available.” It also specified that “encampments in public spaces that pose a public health or safety risk may be immediately removed.”

But the campaign then approached a handful of service providers, hoping to win their support. Gordon McHenry of The United Way told The Seattle Times he was “alarmed” by the emphasis on encampment removals; others I spoke with who preferred not to be identified shared this feeling, using words like “horrified.” The campaign ended up substantially revising its proposal based on input from these service providers. The new language on encampments is softer. You can read the whole thing on the campaign’s website (Section 2, Third Part), but it begins:

It is the City’s policy to make available emergency and permanent housing to those living unsheltered so that the City may take actions to ensure that parks, playgrounds, sports fields, public spaces and sidewalks and streets (“public spaces”) remain open and clear of unauthorized encampments. The City shall develop policies and procedures to address those individuals who remain in public spaces, balancing the City’s strong interest in keeping public spaces clear of encampments and the possible harm to individuals caused by closing encampments.

The repeated rounds of wordsmithing raise a question. If voters approve this measure in November, how will it actually change the city’s approach to homeless encampments? If we’re going to rewrite the city’s foundational document, voters need to know what they’re doing.

I figured I should start by asking the campaign itself. The Downtown Seattle Association, one of the main business groups backing Compassion Seattle, sent me a statement from the association’s president and CEO, Jon Scholes.

“Charter Amendment 29 is focused on bringing people inside,” he stated. “As mental health, substance use disorder treatment and other support services and housing are made available, it will be possible to effectively remove encampments.”

That’s the kind of carefully worded response I expected; the campaign is hardly going to share its legal analysis with me. So let’s ask some lawyers.

Breanne Schuster, a staff attorney at the American Civil Liberties Union, thinks the measure would likely accelerate sweeps. “What the charter amendment does differently than what currently exists in city code is create a policy to effectively prioritize the clearing of public spaces and keeping public spaces clear of houseless folks and their belongings,” she says.

Schuster believes the city is already overstepping the law by continuing to clear encampments, dispersing the people living there and often destroying their tents and personal possessions without being able to offer appropriate shelter, housing and services. The ACLU has twice sued the city over sweeps; one lawsuit was dismissed and the other is ongoing.

“Even if the city passes this charter amendment it’s still bound by Martin v. Boise and other case law,” says Schuster. “But its hands would be tied because it would effectively have … a mandate to prioritize the clearing of city property. It would codify some of the city’s problematic practices into the city charter.”

Mark Sidran, Seattle city attorney from 1990 through 2002, disagrees with Schuster that the city is already overstepping the law. Consistent with his past sponsorship of “civility laws,” he thinks the city should be more assertive about clearing encampments. But he’s concerned that Compassion Seattle will make that harder. He thinks the “balancing” language I quoted above will mandate “a complex evaluation of each camper’s needs,” amounting to a legal right.

“Rather than ‘making City Hall clear encampments,’ as some supporters argue, CA 29’s ‘balancing test’ can be used as a shield to explain why an encampment is not cleared,” Sidran wrote in a statement. “And even if City Hall were more willing to clear encampments, CA 29’s legal barriers will stand in the way.”

“It’s so vague that everybody is going to have a shot at saying it means whatever they want it to mean,” he says. “Not just the encampment provisions but this entire thing is worded so poorly that nobody will know … until a judge decides what it means. By that time it’s too late to change it.”

Three smart lawyers have wildly divergent interpretations of Compassion Seattle’s proposed charter amendment and how it might change the city’s approach to unsheltered homelessness. If the measure makes it to the November ballot, voting yes will be kind of like playing Russian roulette with Seattle’s homelessness policy — dangerous no matter what you believe. Do you think the city should get out there and clear the parks? Vote no. Do you think the city already pushes homeless people around too much? Vote no. The one point Schuster, Sidran and Lowney all agree on is that the charter amendment is a bad, bad idea. We should all take note.