Conservative pundits disparage the new anti-racism education laws coming out of Olympia, but there is nothing harmful about telling the truth. 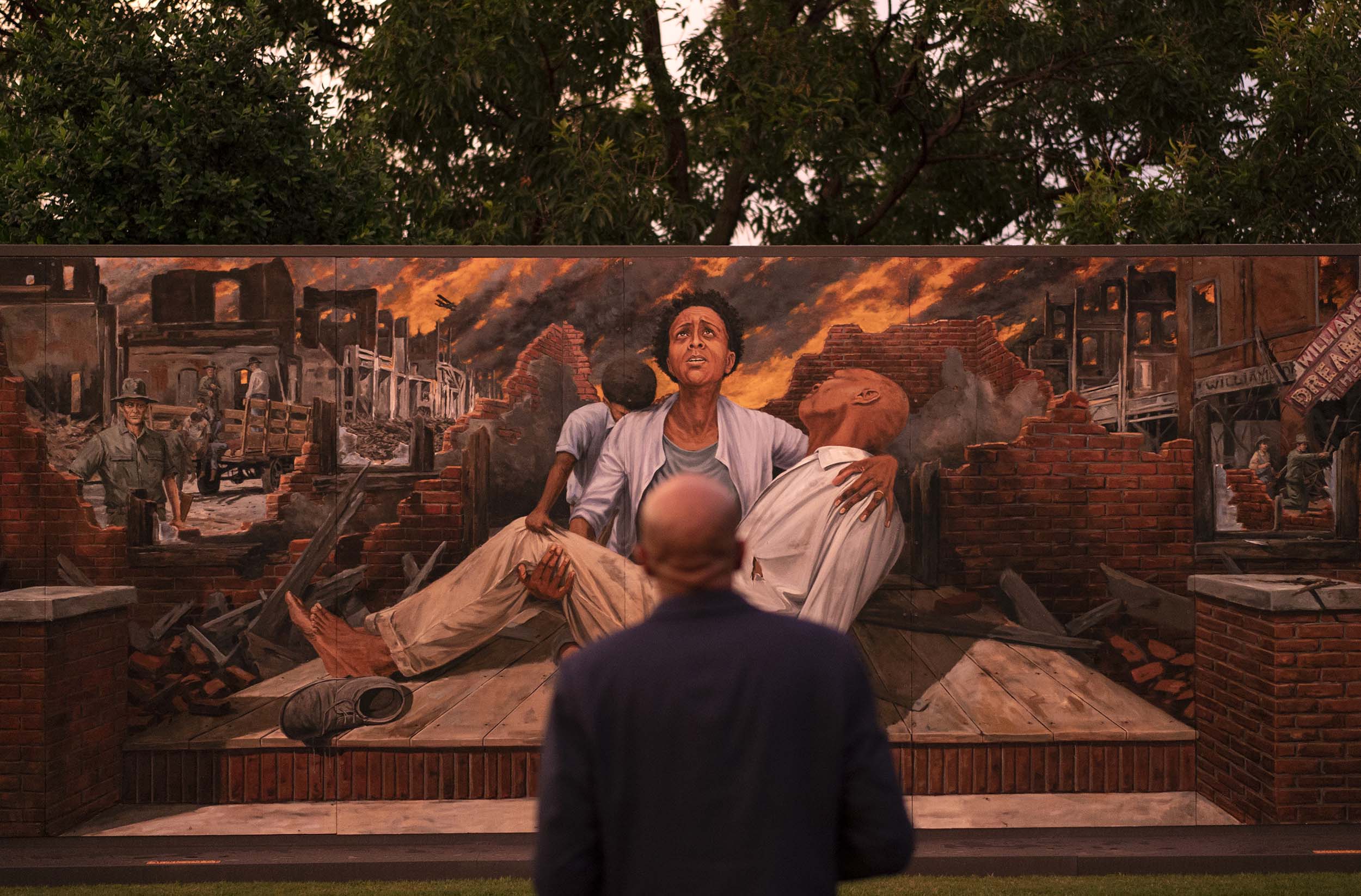 Darius Kirk looks at a mural depicting the Tulsa Race Massacre in the historic Greenwood neighborhood ahead of centennial commemorations of the massacre, Thursday, May 27, 2021, in Tulsa, Okla. The area, originally known as Black Wall Street, was destroyed a hundred years ago when a murderous white mob laid waste to what was the nation's most prosperous Black-owned business district and residential neighborhood. (John Locher/AP)

In the closing days of the 2021 Washington state legislative session, Gov. Jay Inslee signed three bills mandating diversity, equity, inclusion and anti-racism education in K-12 public schools, public colleges and universities, and at state-supported medical schools. Republicans and conservatives around the country, and here in Washington state, responded by attacking the measures, claiming they are part of a broader conspiracy to introduce critical race theory, or CRT, into education.

“Washington state mandates critical race theory in public schools” blared a recent Fox News headline. Liv Finne, education director of the Washington Policy Center, a conservative think tank with offices throughout the state, sums up CRT and these three bills as, “[a] harmful ideology that is tearing us apart.”

Many who argue against CRT can’t even define the term and consider it any education or training having to do with diversity or anti-racism. An idea with academic origins and, like “defund the police,” first embraced by a progressive social movement, CRT has since become another conservative “catch phrase” used against those seeking racial equity and justice. Never mind that the term “critical race theory” is mentioned nowhere in any of these three bills; this attack on CRT, and the bold steps taken by the Washington Legislature, is really an attack on the truth.

One consistent fear many critics of CRT express is that it will harm white children by making them feel guilt or shame about being white and about the treatment Black Americans and other ethnic minorities have received. Closely tied to “white guilt” is the conservative angst that CRT might cause white children to examine the idea of “white privilege,” which many conservatives believe does not exist.

CRT is anything but a “harmful ideology.” It began as a legal theory that simply stated that systemic racism was consciously created, and in order to achieve racial equity, it must be consciously dismantled, in law, law enforcement, economics, politics, education, medicine, and other American institutions. That is precisely what the Washington state bills seek to do. Senate Bill 5044, for example, is entitled, “AN ACT Relating to equity, cultural competency, and dismantling institutional racism in the public school system.” The two other bills — Senate Bill 5227 and Senate Bill 5228 — are similarly worded.

Why are conservatives afraid of dismantling systemic racism in education? Because it would require the acknowledgement of uncomfortable, inconvenient and sometimes painful truths about the foundations of this country. Here’s a partial list of historical truths those opposed to CRT would rather you and your children not learn:

Christopher Columbus, and other explorers, were not on altruistic missions of discovery for the benefit of humankind. They came to the New World specifically to plunder natural and human resources for the monarchies they represented. With the blessings of the Catholic Church, Columbus, for example, originally anticipated enslaving the local Indigenous population to work in Spanish gold and silver mines. Only he hadn’t anticipated that his men would introduce smallpox into the Americas, wiping out millions of Indigenous natives who lacked immunity. With a ready local labor source decimated, the Spanish turned to Africa as a source of enslaved labor for their New World colonies. The model was adopted in colonial America as well.

Slavery was not an inevitability in America. It was a choice. The choice to enslave Africans was made by the wealthy planter class in colonial America who needed labor to establish and maintain their wealth. Other options about labor and wealth that did not involve slavery were available, but those other options represented roads not taken by families like the Washingtons, Jeffersons and Winslows. Slavery was the route they choose, and American legal, law enforcement, political, cultural and religious institutions developed to support that choice.

Without slavery, American ideals of liberty and freedom would have struggled to come into being. Tobacco was the major agricultural crop grown by the wealthy planter class of Founding Fathers. But growing tobacco was time-consuming and all-demanding. Without slaves, men like Jefferson and Washington would never have had the leisure time to gather in contemplation of such lofty ideals as liberty and freedom, let alone stage an American Revolution. They would have been far too busy tending to their crops.

History, it is said, is written by the victors. American history has long been written by a victorious, wealthy, white, privileged class. “No justice, no peace” is one slogan often heard by those protesting for racial equity. But there’s an equally important slogan that also should be heard, “No truth, no reconciliation.”

Efforts aimed at racial reconciliation must begin by telling the truth about the history of Blacks and other minorities in this country, however painful those truths. The three bills passed by the Washington Legislature represent the first steps in that process of truth telling leading to reconciliation.

If SB 5044 had already been law, then perhaps Emzayia and Zyeshauwne Feazell, two Black students at the Sacajawea Middle School in Spokane, would not have been humiliated and demeaned by being asked to pick cotton as part of their social studies class on May 3. Maybe they, and the other, white students, would have been taught the truth about cotton, the Industrial Revolution and slavery; that Eli Whitney’s invention, far from diminishing the need for slavery, increased the demand for enslaved labor tremendously. After the introduction of the cotton gin, Southern white planters and the families running Northern textile mills, saw a way of greatly enhancing their wealth. They just needed more slave labor to feed the hungry new machines, and they needed more land to grow cotton on, land that men like Andrew Jackson stole from Black farmers and Native Americans.

Unlike those opposed to the three bills passed by the Washington Legislature, I trust that students exposed to the truth will not develop feelings of guilt, but rather feelings of empathy. I trust that if they recognize that they have privileges and advantages because of their skin color, they will work to make sure that everyone has the same privileges and advantages, regardless of skin color. Hopefully, when these young people become legislators and leaders, they will not repeat the sins of the past but will have learned from them, seeking reconciliation, redress and a dismantling of systemic racism instead.