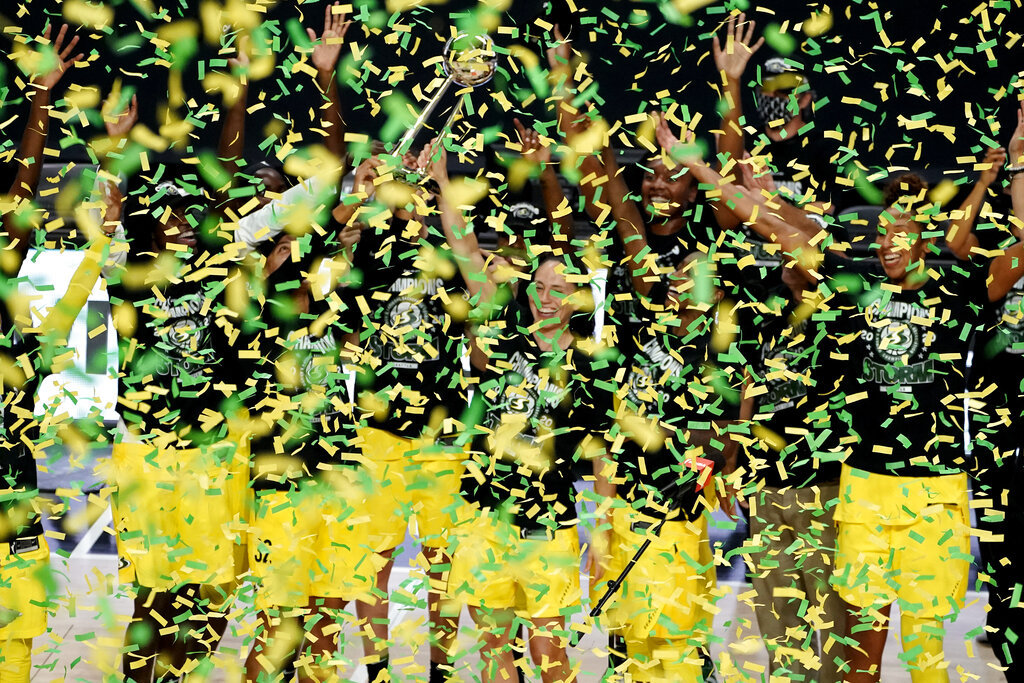 Seattle Storm guard Sue Bird holds up the trophy after the team defeated the Las Vegas Aces to win the WNBA Championship on Oct. 6, 2020, in Bradenton, Florida. (Chris O’Meara/AP)

Since the SuperSonics left Washington state way back in 2008, Seattle basketball fans have talked about the team returning as though it were the Second Coming — some faraway eschatological event that will happen one day, if we only have enough faith.

In case you’re new to the city, here’s the very brief history: The Sonics played here from 1967 to the mid-2000s, when majority owner (and then-CEO of Starbucks) Howard Schultz sold the team to Oklahoma investors after conversations with Washington state about renovating KeyArena (now Climate Pledge Arena) broke down. The new ownership moved the team to Oklahoma City in 2008, where it became the Thunder. That is when the gnashing of teeth truly began.

Lately, however, as talk of NBA expansion becomes more concrete — with Seattle seemingly at the top of the list, given our history, our healthy sports market and our revamped arena — the return of the Sonics appears to be less a dream than a reality.

And if it does happen — if the Sonics do come home in some form — I hope we recognize the role our city’s most decorated professional sports team played in making it possible. I’m talking, of course, about the Seattle Storm, the four-time WNBA champions, who have kept Seattle’s basketball spirit alive in the Sonics’ absence — and who seem poised to continue their dominant streak whether or not an NBA squad comes back to town.

I’m not going to pretend the success of the Storm is the reason the Sonics could come back — and I recognize that the NBA’s financials vastly overshadow the sort of numbers we talk about in the WNBA — but a thriving women’s team in a market that doesn’t have an influential men’s team running cross-promotion is certainly a bullet point in the argument to bring the NBA back to Seattle.

“The Storm are getting a tremendous amount of support, and I do think that’s something that the NBA acknowledges, just as I think the NBA would acknowledge that leading up to before the Sonics were removed, the Sonics were always well-supported, too,” Jeff Brown, author of the Storm Chasers Substack and one of the masterminds behind the Bring Back Our Sonics online community, tells me. “So Seattle is 100% a basketball city.”

Jeff grew up going to Sonics and Storm games alike with his father, David Brown, who taught him that good basketball is good basketball, regardless of the gender of the players.

It shouldn’t surprise anyone that some of the most dedicated voices in the effort to bring back the Sonics are huge Storm fans, too. Yes, there is tension over the way some in our city overlook the Storm. I know I’ve balked before at Seattle sports fans who ask me what “the Storm” are when I wear a team hats. (Only a team that has brought home championships twice in the past three years, that’s who!)

But the people who truly love basketball — like Jeff Brown and his dad, like Husky-turned-pro Isaiah Thomas, and like the former Sonics players who routinely show up to Storm games as guests of honor — know how good the women’s game is, and that what’s good for one league is good for both. There can be a camaraderie at those high levels, as anyone who’s seen that famous photo of Gary Payton and Sue Bird knows, and the Storm themselves are eager to have that back.

“I know from speaking to the players that Sue Bird wants the Sonics back,” Brown tells me. “Breanna Stewart — she wants Seattle to have an NBA team. Because I’m sure they would like to interact with players locally.”

For the Storm, having the Sonics back would be a return to a natural order. From 2000, when the Storm played their first season, to 2008, when the Sonics left, the two teams overlapped, sharing a facility and their iconic green and yellow team colors.

Joe Munson, who does production for the Sonics Forever podcast, is eager for those Storm-Sonics salad days to return, and has had that Gary Payton-Sue Bird photograph etched in his memory from an early age.

“Growing up, they definitely felt very interlinked in my mind,” he says.

Like Brown, Munson believes that the Storm play a role in placing Seattle at the top of the rumored list for NBA expansion, especially when Climate Pledge — the arena that was revamped for the Seattle Kraken, but also in part to give the Storm a permanent home — is ready for professional players to lace up their ice skates and sneakers.

“I think the Storm absolutely contributes, for sure,” says Munson. “It’s a bummer that the stadium won’t be done in time for the end of the [Storm] season this year, but by next year, once the Storm are playing in Climate Pledge, I think it’s going to be an even bigger deal — a big piece of evidence to the NBA that there’s a lot of passion for basketball [here].”

Right now, that passion is hard for many fans to display. The pandemic took away the Storm’s home-court advantage for the entire 2020 season (though it didn’t stop them from winning the championship in a Florida “bubble”). And without Climate Pledge complete, the team is playing out the WNBA’s 25th anniversary season in Everett, which is too far for many regular fans, myself included, to travel.

Despite these obstacles, the Storm are off to a roaring 5-1 start this season, winning two of their last three games in overtime before cruising to a double-digit win over the Minnesota Lynx last Friday. Sue Bird is still sinking threes from deep, Jewell Loyd is making game-changing shots and Breanna Stewart continues to prove why she’s one of the best in the sport. Longtime head coach Dan Hughes announced his retirement over the holiday weekend, but the team will be in good hands under the leadership of former player-turned-coach Noelle Quinn.

The Storm are, of course, more than worthy of support in their own right and for their own sake, as I’ve written about before. You should support them because they’re incredible athletes who put out an exciting product.

But if you’re one of the many walking around with that nostalgia for the Sonics, or with the desire to see NBA basketball in this city again, you should also know that supporting the Storm could help seal the deal we’ve all been waiting for.