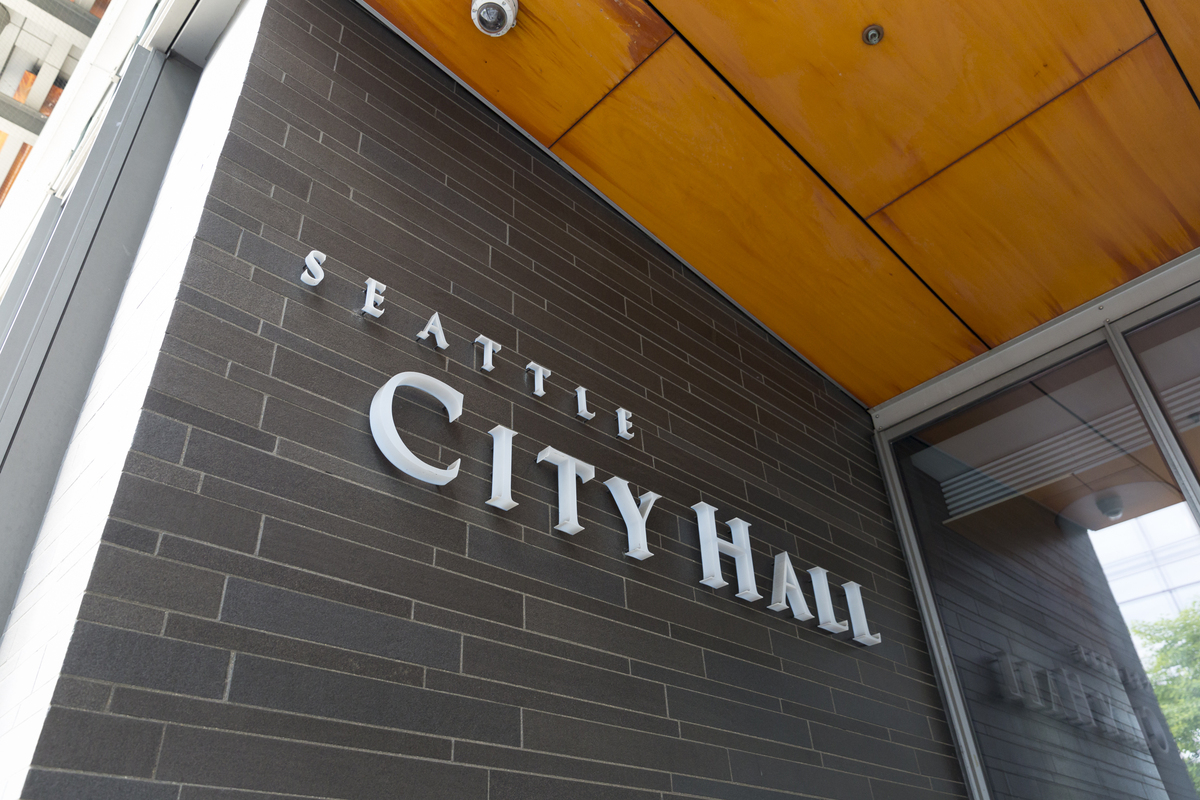 Seattle is in an electoral sweet spot right now. Primary elections for mayor and two citywide council seats are still a couple months away, but the filing deadline has passed. So we know who’s running, but most people outside Seattle’s hyperactive political class have yet to hear about most of the candidates. At this point, anything could happen — well, kind of. Which means this is a great time to make wild predictions. What will the Seattle City Council look like next year, and who will be our next mayor? Let’s get out the crystal ball.

Easy one first. Position 8 Councilmember Teresa Mosqueda will be reelected in a landslide. Plenty of people are running against her, but none is a remotely serious threat. Only two have raised any funds at all: perennial candidate Kate Martin and LaRouche cultist Paul Glumaz. Chop saw-wielding Mike McQuaid might have fared slightly better, but he wisely dropped out back in March.

How about Position 9, the seat that Council President Lorena González is vacating to run for mayor? There are three real contenders: Fremont Brewing co-owner Sara Nelson, González’s chief of staff Brianna Thomas and community organizer Nikkita Oliver, all of whom have run for office before. This race seems poised to become a kind of referendum on Seattle’s police divestment and reform efforts to date, with Oliver representing the abolitionist left, Thomas the current city council’s more cautious approach and Nelson, well, the backlash.

Nelson is clearly right-of-center on the Seattle political spectrum; she was once a council aide to Richard Conlin, who was ousted by Kshama Sawant in 2013. While she may make it through the primary, I don’t believe she can win. After a year of national reckoning with racial oppression and police violence, it’s difficult to imagine Seattle electing a white business owner whose website and platform include (at the time of publication) not a single mention of race — even in the section on policing. If moderate Democrats want to win in Seattle, they have to at least pretend to comprehend and care, and Nelson isn’t doing that.

Meanwhile, Thomas and Oliver are both picking up endorsements from progressive labor unions, which often come with boots on the ground and volunteers on the phones. (Nelson has won support from some of the more conservative unions, including Ironworkers, Firefighters and the Seattle Building and Construction Trades Council.) But ultimately I think Oliver’s grassroots ground game will be hard to beat. Seattle might flinch at electing a radical mayor — had Oliver made it through the primary in their 2017 mayoral run, I doubt they could have beat Jenny Durkan. But the council is lower stakes, and I think Oliver can pull this one off.

These two council races remind me a little of the 2019 district elections. The city council was supposedly unpopular, deeply so, and yet all three incumbents who ran were reelected. Not only that, two of the four new council members came from inside City Hall — one a council aide, the other an assistant city attorney. Sure, there were many forces at play, including Amazon’s $1.5 million blunder. But I think it’s notable that the more conservative, business-backed candidates were just not impressive or inspiring.

Maybe the cream of the centrist crop didn’t fancy four years of being hated on by the Seattle left. Maybe they also had more lucrative career options. Or maybe centrism itself is so bankrupt of answers to today’s burning problems that moderate candidates can’t help but seem clueless or reactionary. Whatever the reasons, the Seattle City Council’s low ratings didn’t translate into viable opposition to its progressive agenda, and in fact the elections moved it further left. That could happen again this year.

And that brings us to the mayor’s race. This is where things get muddy, but we do have some clues. Polling by former state legislator Jessyn Farrell’s campaign, conducted in May, showed the candidates in this order: Bruce Harrell in the lead with 23%; Lorena González next up with 11%; Farrell and Colleen Echohawk tied at 7%; Casey Sixkiller at 5%; Andrew Grant Houston at 3%; and all other candidates sharing 3%, with 41% still undecided.

It’s important not to conclude too much from these numbers, as these are still early days. Back in 2009, a poll conducted in mid-July, just one month before that year’s primary, showed Mike McGinn tied for fourth with 8% support and only 25% undecided. He would ultimately place first with nearly 28% of the vote and then go on to win the general election. I don’t think we can write off any of the top six candidates just yet.

But let’s make some guesses. Purely by the numbers, Houston and Sixkiller have the toughest road ahead. The climb to victory may be especially steep for Deputy Mayor Sixkiller, judging by another finding of the poll: 46% of respondents believe the city is moving in the wrong direction, while only 19% think we’re on the right track. (The rest gave mixed answers, which Farrell’s campaign also interprets as pessimism about the direction of the city.) If voters feel that a new mayor is key to changing course, as seems likely, working for the current one is hardly an asset.

To the extent that this “wrong direction” sentiment reflects hardened dislike of the current city council, it could also spell trouble for Council President González. No doubt there’s some distaste for the council, especially since it has been relentlessly maligned by The Seattle Times editorial board and other mainstream opinion-makers for years now. But there’s also antipathy toward Mayor Durkan.

Perhaps most of all, there’s a vaguer sense of malaise and dysfunction at City Hall — most people aren’t following the details. González’s opponents will be working to associate her with this malaise. Can she tout her experience and achievements on the council without seeming out of touch? Or interpret the dysfunction to voters and explain how electing her as mayor will change it without sounding defensive? It’s a tough line to walk.

Farrell and Echohawk can more easily cast themselves as outsiders, even though both are really political insiders with plenty of establishment connections. Farrell’s campaign, in particular, seems to be pursuing this strategy aggressively, promising to end “infighting and stagnation in city government” and painting González with the City Hall dysfunction brush — despite, or perhaps because of, the fact that their actual politics are so similar. Both are progressives who promise to fight for working families and aren’t afraid to talk about taxing the rich. Echohawk has been more cautious on the latter point, leading many on the left to fear that she’d be deferential to big business once in office. I think it’s hard to be sure. Right now, at least, these three are vying for many of the same votes.

Harrell, on the other hand, has locked down the section of the electorate — nearly a quarter, it seems — that’s convinced that the current city council has veered too far left and, perhaps, is looking for someone to bring back the good old days of 2007, when Harrell was first elected to the council. It’s hard, though not impossible, to imagine Harrell failing to make it through the primary with this surprisingly strong early edge.

Who else is most likely to make it through? As I’ve said, the level of uncertainty is high. But if I had to place a bet today, I’d say González, in part because she’s been scooping up most of the labor union endorsements. Also, as PubliCola reports, González’s own polling from late March puts her neck and neck with Harrell.

Who wins that matchup? In contrast to the past two mayoral races, where the victor was backed by a business-labor coalition, this one would be a dramatic faceoff with labor and progressive-left forces on one side, business and centrist-to-right-leaning forces on the other. (For anyone bemoaning this divide, get used to it, because there are major political realignments underway; we’re not talking about a reversible Seattle glitch here.)

The outcome is anyone’s guess, and I think it would be close. Much would depend on how effectively pro-Harrell forces turn anti-City Hall sentiment against González, or how adept she is at flipping the script. The irony of the possibility that Harrell could get elected as a “change” candidate is that, of all the contenders, I think he may be the most likely to turn out similar to Durkan in both politics and style, meshing poorly with the more progressive council and perpetuating the dysfunctional status quo. All the others, with the possible exception of Sixkiller, really would mark a change, and probably a better and more productive relationship between the legislative and executive branches.

That’s plenty of speculation for one column. Am I onto something? Do I have it all wrong? Let me know what you think. The betting pool for Seattle’s future starts now.

Correction An earlier version of this story neglected to mention that Sara Nelson had secured endorsements from labor groups. The story has been updated.